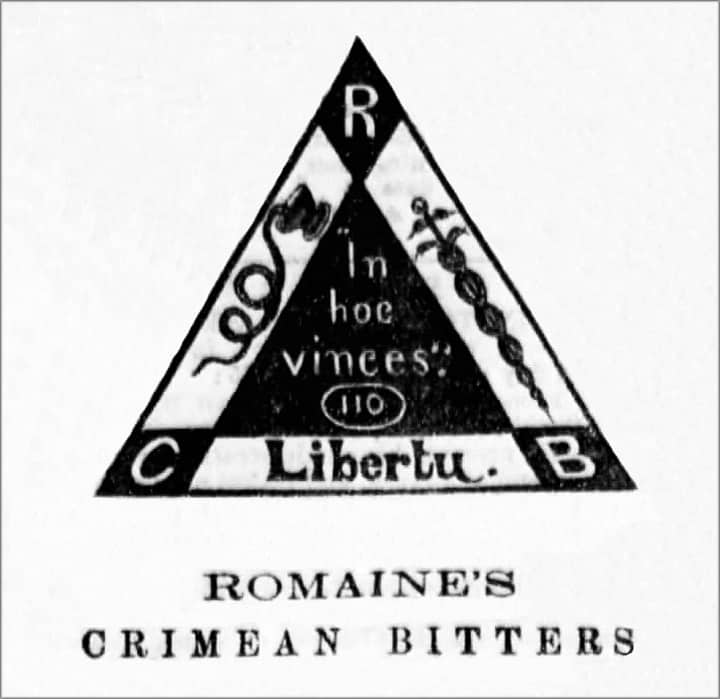 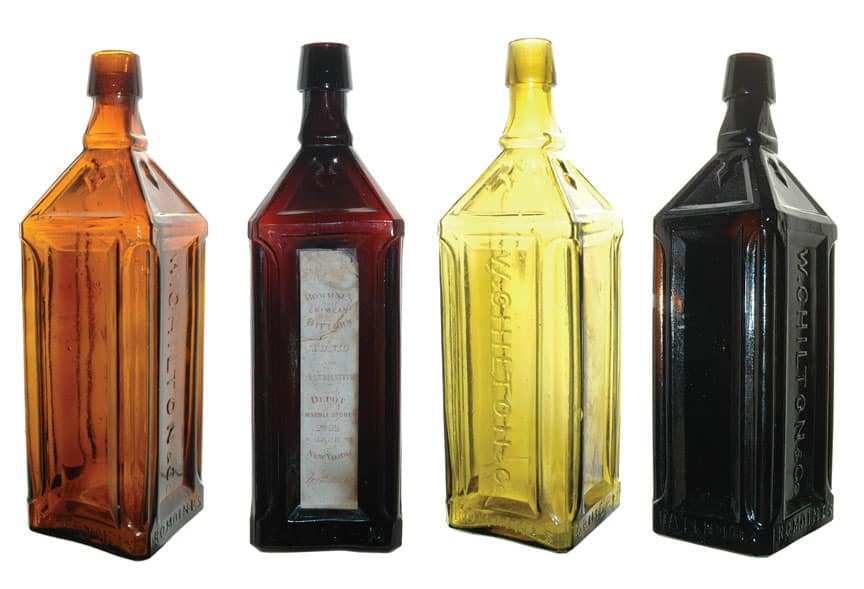 A few days since Newbern was dreadfully alarmed at poster’s placed in conspicuous places over the city, in these mysterious characters: R C B. The Mayor called upon his officials to tear the incendiary document down, which could mean no less, he supposed, than “Rise, Colored Brethren”.

This time around I wanted to talk about the mysterious triangular logo with the initials  “R C B” at each point of the triangle. Within the triangle is “In Hoc Vinces” and the number “110” in an oval. “Libertu” is written at the base of the triangle. What did this mean? Some thought, and were quite alarmed, that it meant, “Rise Colored Brethren”. This might explain why many Romaine’s Crimean Bitters advertisements have a blank space where the logo might have been placed.

Newspaper advertising for Romaine’s Crimean Bitters usually took the form of full-page columns touting the bitters with testimonials and other tidbits of medical benefit information. The ads occurred from May 1863 until mid to late 1866 in newspapers like The Brooklyn Daily Eagle, The New York Times, National Republican (Washington, D.C.), Burlington Weekly Free Press (Vermont), Reading Times (Pennsylvania), Vermont Watchman and State Journal (Montpelier, Vermont) and the New York Tribune. About 10% of the advertising included the triangular art and the rest did not. Examples of both are below.

Full page column advertisement for Romaine’s Crimean Bitters. Notice the conspicuous open area at the top of the ad. Was the triangular logo pulled? – The Brooklyn Daily Eagle, Wednesday, May 17 1865 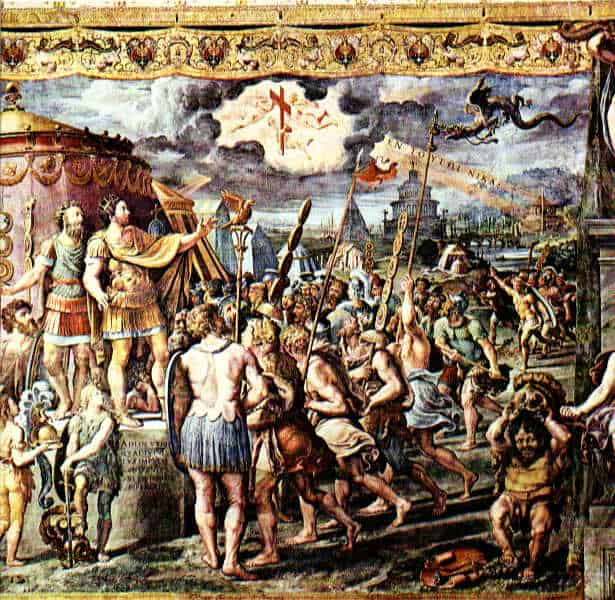 Detail from The Vision of the Cross by assistants of Raphael, depicting the vision of the cross and the Greek writing “Ἐν τούτῳ νίκα” in the sky, before the Battle of the Milvian Bridge.

“In hoc vinces” or “In hoc signo vinces” is a Latin phrase meaning “In this sign you will conquer.” It is a translation, or rendering, of the Greek phrase “ἐν τούτῳ νίκα” en touto nika níkaː]), literally meaning “in this conquer.” So take this bitters and conquer your illness. It also relates to something else which we well see further on.

“Libertu”, meaning I suppose, liberate yourself from whatever and all illnesses that Romaine’s Crimean Bitters will cure.

The imagery is the bowl of Hygeia with the serpent of Epidaurus. Hygeia was Aesculapius’s daughter and a Goddess of health (“Hygiene”). Hygeia was often pictured holding a cup with a snake coiled about her body or arm. The medical staff is the Caduceus with the two snakes on the staff that has been adopted in the West as a symbol of medicine (not pharmacy) since the 19th century and has likely stemmed from bowl of Hygiea and the serpent. The staff is depicted with wings and is that of Mercury (Roman) or Hermes (Greek), the messenger of the Gods.

These bitters marketing guys, weren’t holding back any punches.

Marianne Dow states that 110 has to do with Psalms 110:1 and is a Masonic reference. “The LORD said unto my Lord, Sit thou at my right hand, until I make thine enemies thy footstool.”

The facsimile bank note below, from the Joe Gourd collection, helps illustrate more about the name of this bitters, “The Crimean Bank” is the prominently arched over a fort under attack. “In hoc vinces” is beneath the illustration. There are tepees and rifles at the base of the note flanked by the signature of “Romaine” on the left and “W. Chilton” on the right.

The Crimean War (October 1853 – February 1856) was a conflict in which Russia lost to an alliance of France, Britain, the Ottoman Empire, and Sardinia. The immediate cause involved the rights of Christian minorities in the Holy Land, which was controlled by the Ottoman Empire. The French promoted the rights of Catholics, while Russia promoted those of the Orthodox Christians. The longer-term causes involved the decline of the Ottoman Empire, and the unwillingness of Britain and France to allow Russia to gain territory and power at Ottoman expense. Russia lost the war and the Ottomans gained a twenty-year respite from Russian pressure. The Christians were granted a degree of official equality and the Orthodox gained control of the Christian churches in dispute. [Wikipedia] 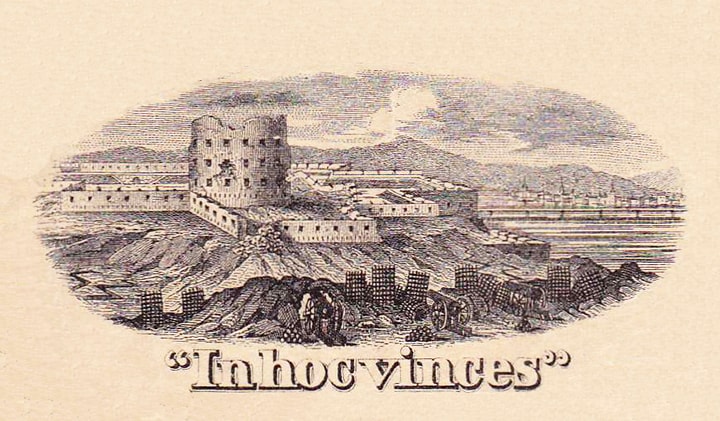 The illustration above, from the Romaine’s Crimean Bitters facsimile bank note, shows what appears appears to be Fort Konstantin and Fort Mihail under attack. During the Crimean War, The Siege of Sevastopol lasted from September 1854 until September 1855. The allies (French, Ottoman, and British) landed at Eupatoria on 14 September 1854, intending to make a triumphal march to Sevastopol, the capital of the Crimea, with 50,000 men. The 35 mile traverse took a year of fighting against the Russians. Major battles along the way were Alma (September 1854), Balaklava (October 1854), Inkerman (November 1854), Tchernaya (August 1855), Redan (September 1855), and, finally, Sevastopol (September 1855). During the siege, the allied navy undertook six bombardments of the capital, on 17 October 1854; and on 9 April, 6 June, 17 June, 17 August, and 5 September 1855. “In hoc vince”, we will conquer. 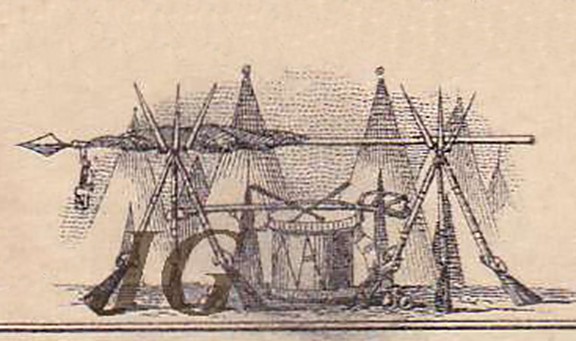 The tents had me wondering. Indians? The Civil War? No, this illustration, also from the facsimile bank-note, also represents The Siege of Sebastopol. This is Captain Wodehouse’s Battery at Camp Redoubt (see illustration below). 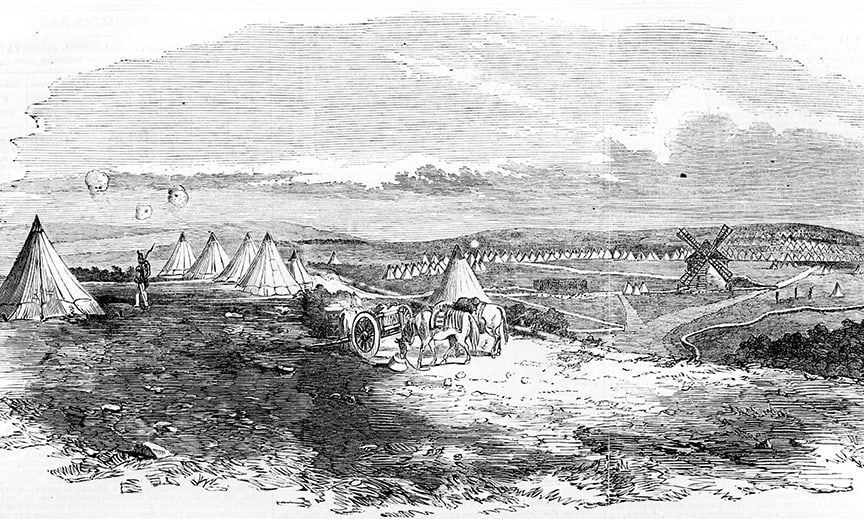 The Siege of Sebastopol. Part of Captain Wodehouse’s Battery from The Illustrated London News, 18 November 1854

Read about another bitters with a Crimean War link: What about this New Orleans Malakoff Bitters?

You all have seen bandit signs before. You know, the little wire and cardboard signs that seemingly appear overnight at intersections and in medians touting a nefarious product, local apartment complex or politician wanting your votes. They are illegal but they happen. Like weeds, you have to be diligent in removing the nasty little things. 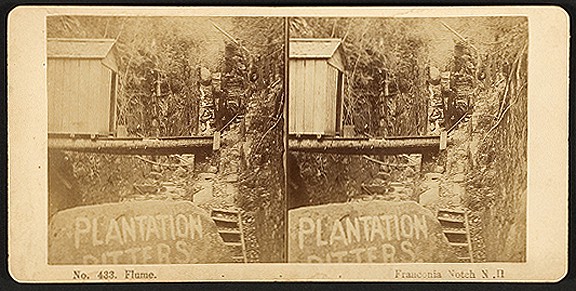 Guerrilla marketing was originally a marketing strategy in which low-cost, unconventional means (including the use of graffiti, sticker bombing, flyer posting, etc.) were used in a (generally) localized fashion to draw attention to an idea, product, or service. Many bitters used this type of advertising, the king being Drake’s Plantation Bitters.

The two notices below explain the incident with the alarming number of small triangular “R C B ” cards posted on trees, fences, and brick walls. Interesting that this made national news. Did it alarm the marketeers? Usually any type of advertising is good to create product awareness and “buzz”. 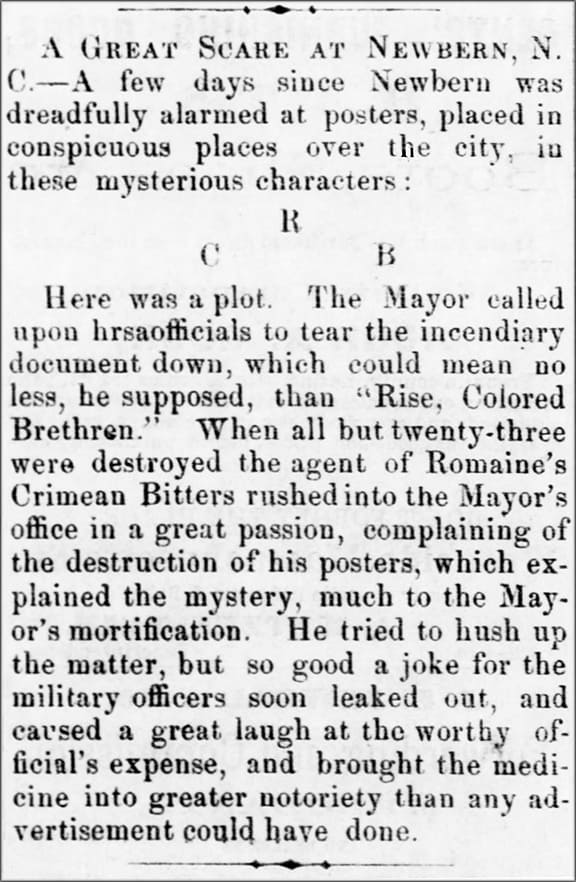 The tall front label reads, “Romaine’s Crimean Bitters Tonic and Alterative”, “Depot Marble Store, No. 22 Walker St., New York”. It is signed “W. Chilton & Co”. The back label, not pictured, contains the medical benefits of the brand. More on Romaine and Chilton later.

“In Hoc Vinces” at the top of the label on a Romaine’s Crimean Bitters. Stephen Fletcher (Skinners) found a collection of bottles in a step back cupboard protected by a roll of chicken wire that was tacked to the face of the cupboard. This is one of the bottles. (from Jeff Noordsy) – Meyer Collection