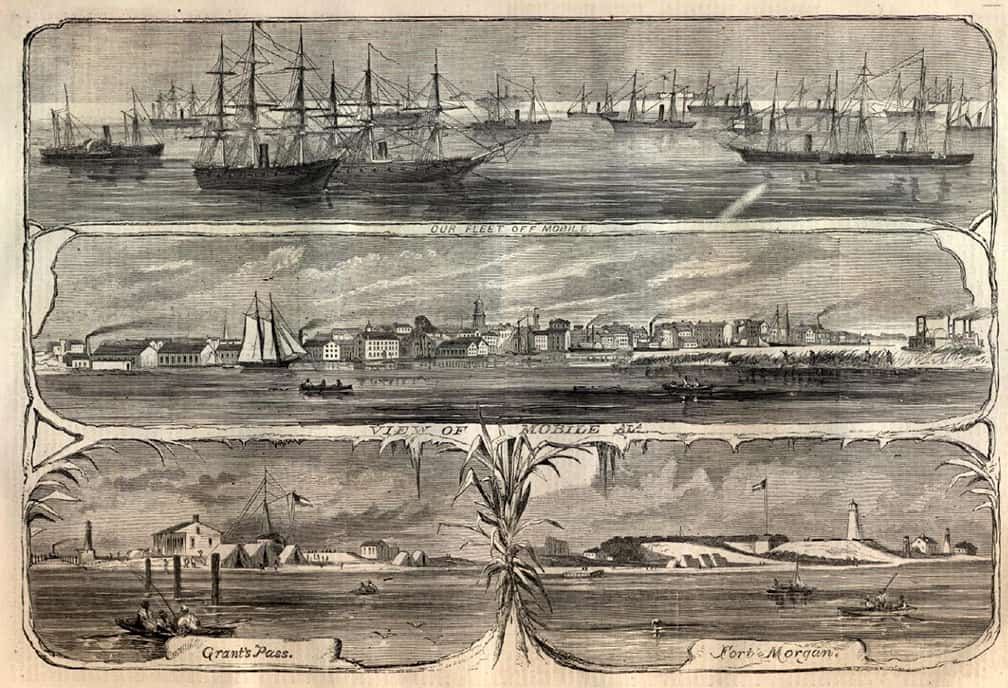 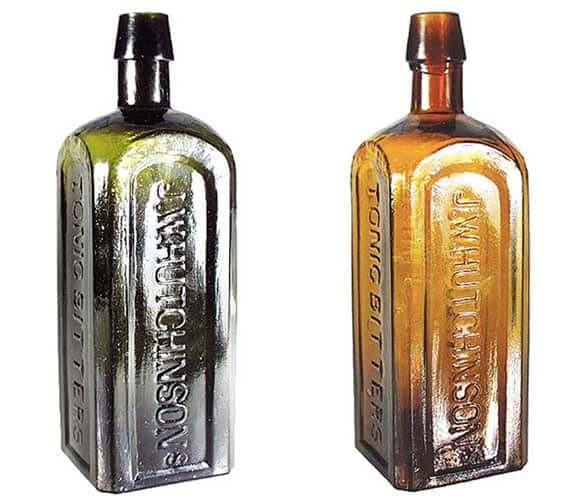 I suspect many bitters collectors have noticed that spectacular example of a Hutchinson’s Tonic Bitters from Mobile, Alabama in the current American Glass Gallery Auction #13. No sense hiding it. The right people know. I used the nice full-page Civil War illustration above from March 26, 1864 in Harper’s Weekly to set the tone for this piece. The map below is Mobile in 1815. You can actually see Dauphin Street running up the middle of town. John W. Hutchinson was a druggist at Dauphin and Warren Street (see this location now) as early as 1840. 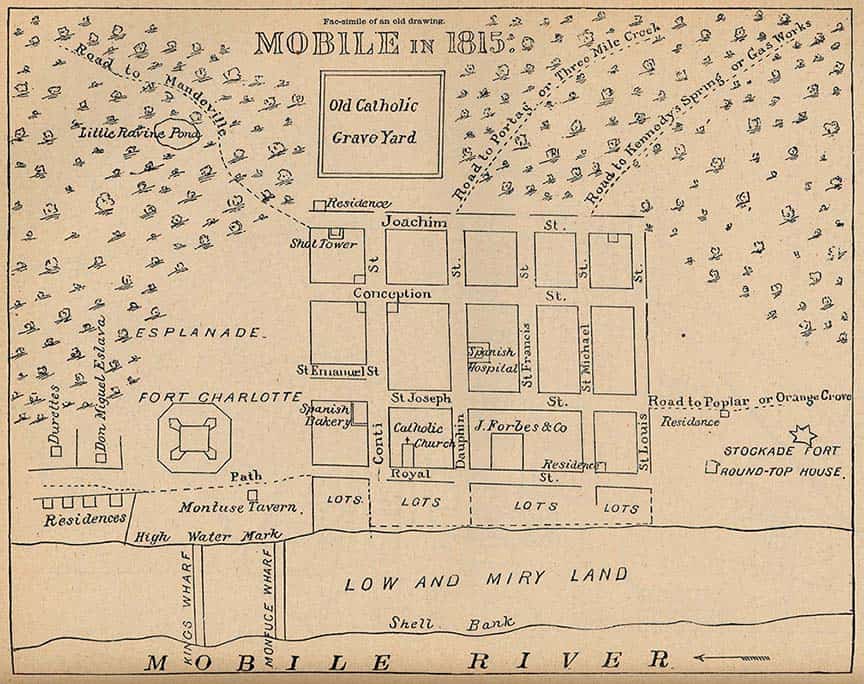 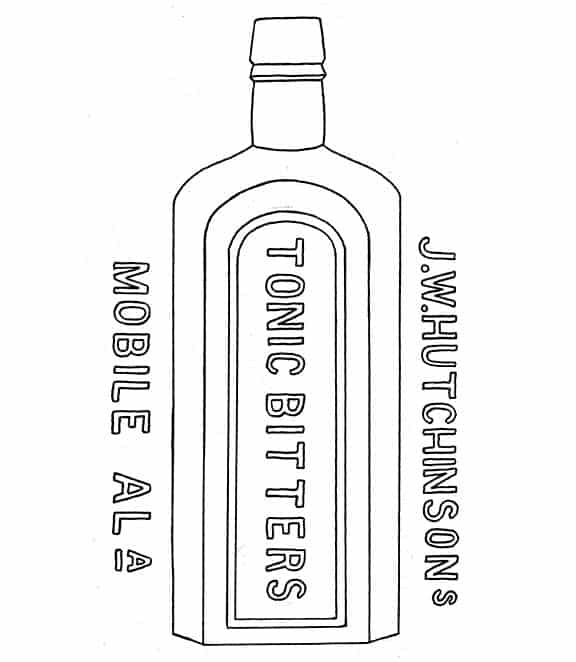 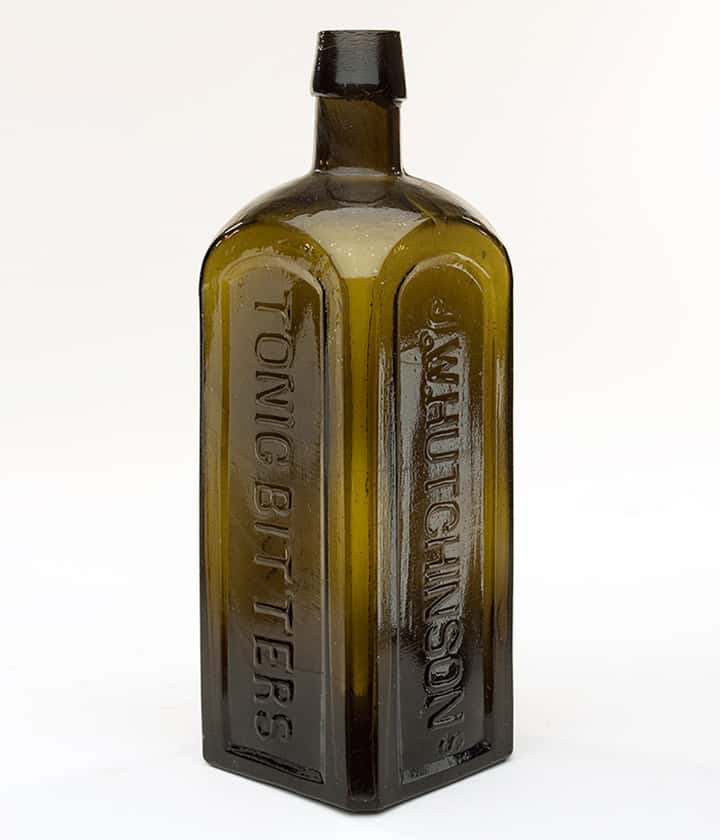 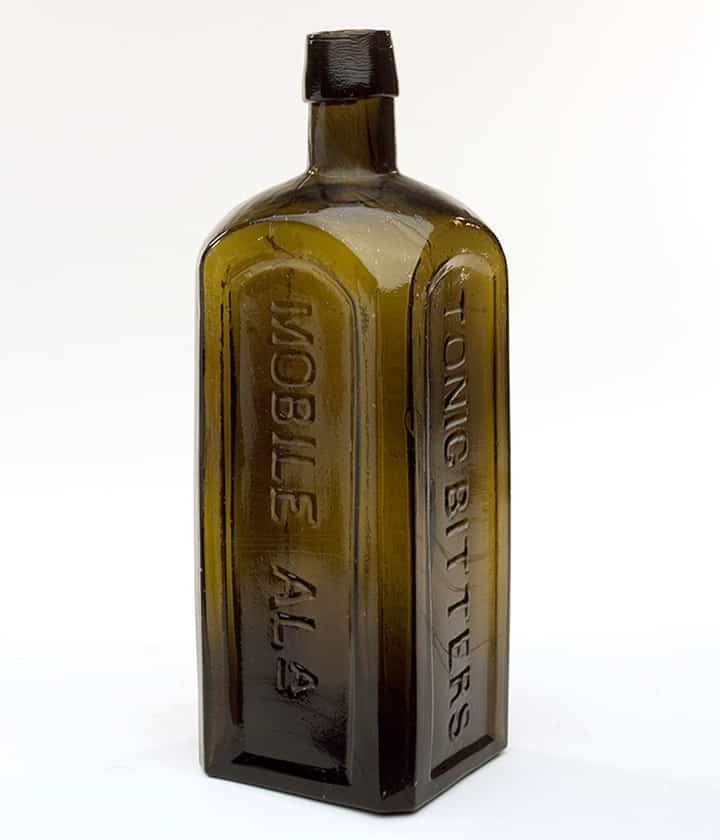 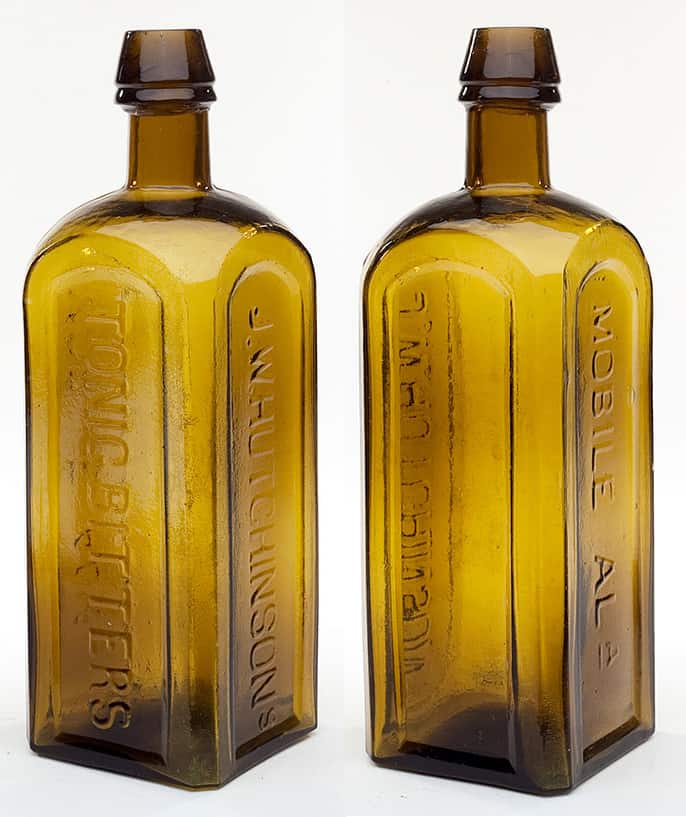 What fascinates me is the long shelf-life of this bitters. From the best that I can tell, John W. Hutchinson was selling J. W. Hutchinson’s Tonic Bitters from 1840 to 1879. That is 39 years. Hutchinson was a druggist located at the corner of Dauphin and Warren Streets in Mobile, Alabama all of those years. I suspect that there may be earlier examples of the bottle than the one pictured in the American Glass Gallery auction. Ring & Ham note aqua and pontiled examples out there too. Look at some of the really cool advertisements below that I found in Mobile City Directories. Notice that he also sells garden seeds.

It is my belief that most of the colored Hutchinson’s have had the original iron pontils fire polished off during manufacture. This is especially evident on my olive green example. (See picture below) You can see that it was pontiled, and removed. I also have large shards that I dug of a radically different EMERALD green Hutchinson’s, with a huge iron pontil on it. “The colored ones ain’t supposed to come that way” but at least one did, and I wish it had been whole. I also believe that the Hutchinson bitters were only sold for a very short time in embossed bottles. There was always advertising hype of “tried and true”, “Indian”, or even “ancient” recipes applied to even new concoctions in order to increase sales. I have found listings from the old city directories that list J.W. Hutchinson in business in Mobile from 1855 to 1872, so I don’t know why one of his ads has “1840” at the top. I also have pontiled and smooth base, embossed drug store bottles form J. W. Hutchinson, in five different sizes. Some of these may have been sold with a label only version of his bitters, before, during, and after he put it up in embossed bottles, but no one knows. – Rod Vining 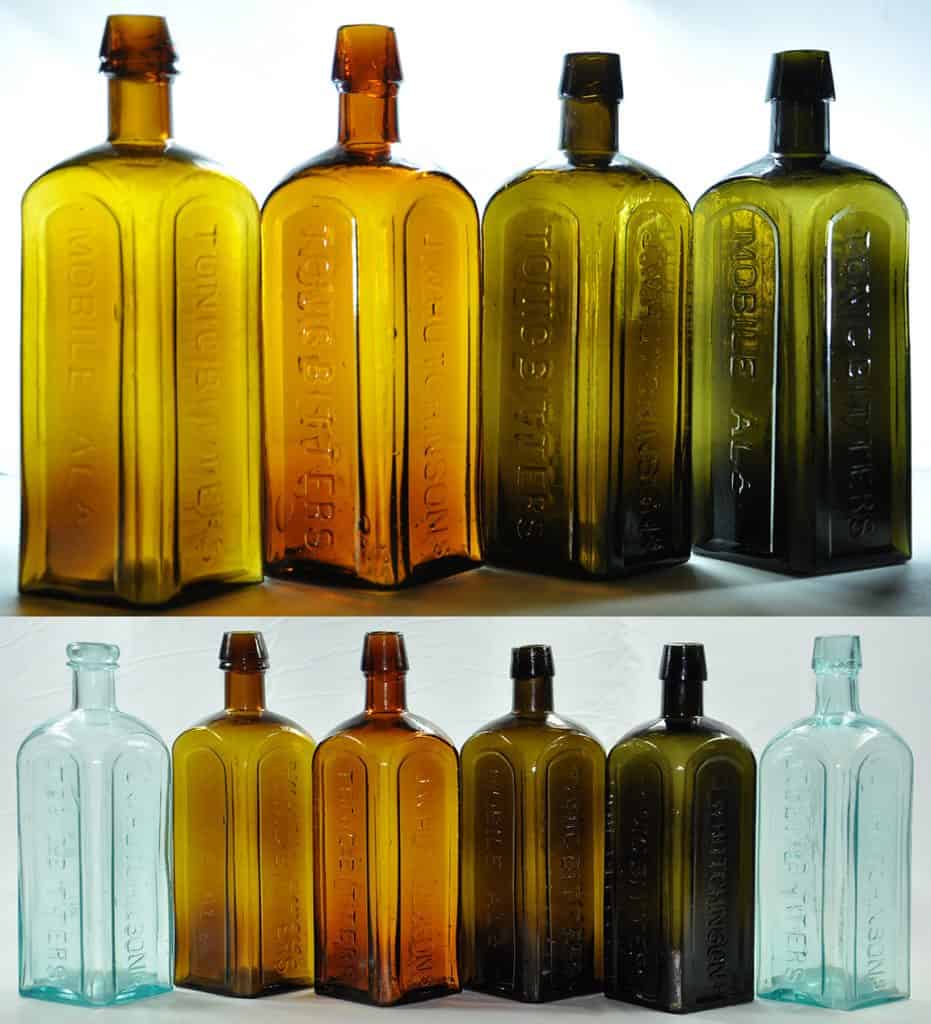 New photos of the Hutchinson’s Tonic Bitters. #85 is just the colored ones with strong backlight. From left to right, yellow amber from recent AGG auction #18, amber, olive amber from AGG auction #13, pure olive green. #119 is the whole bunch. Same colored ones flanked by a smooth base aqua on the left and an iron pontiled aqua one on the right. Note different tops Here is the story to go along with the yellow amber one. I have a bottle book from 1971 titled “1250 Bitters Bottles” by Ed Bartholomew. I am 99% certain that the yellow amber Tonic Bitters is the one pictured on page 182 as part of the author’s collection. It was a dug bottle, and in a black and white photo, but the top is unmistakable, since the “colored” ones almost always have a long tapered collar with no ring underneath. The only other colored example with a non-standard top has one of the bottom corners of the bottle missing. Also, the photo in the book shows a ring of glass under the lip that has a distinct up and down pattern to it visible on the “J.W. Hutchinson” panel. This is how I know this is the same bottle from the 1971 book. I found and called Ed Bartholomew about 15 years ago. He was an elderly man, and he no longer remembered much or seemed to care what happened to his bottles. He had no idea where or when he sold the Hutchinson Tonic Bitters. That was the end of the search until I saw the auction photo. I immediately dug out the old book to verify my hunch. Just another of one of those that I “had” to have. – Rod Vining Collection 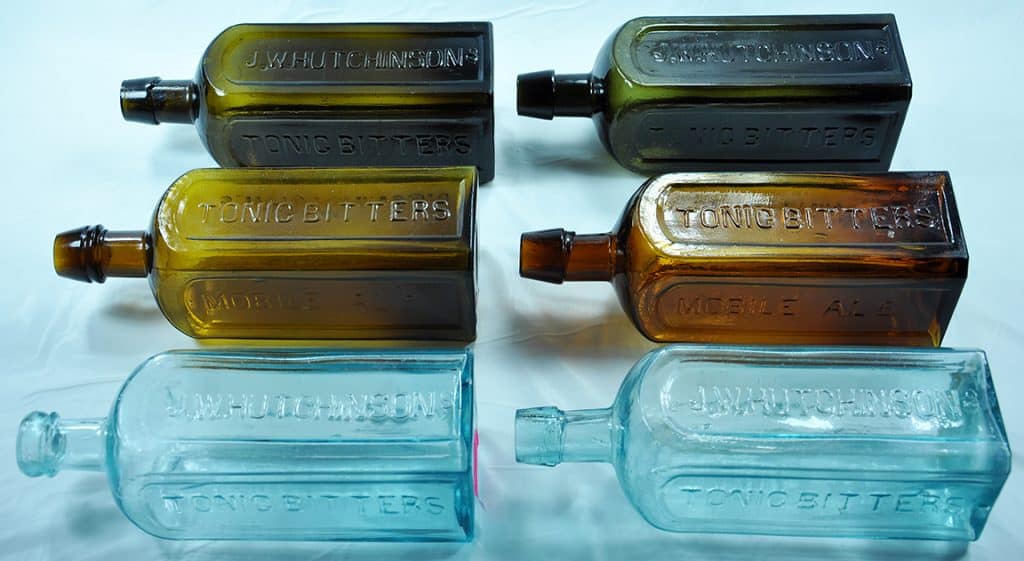 [040220] I had some time to take some new photos and thought I would send you some updates for your website. Here are the J. W. Hutchinson’s with the newest addition in the center. The black mark visible through the base is the Black iron pontil on this never buried specimen. Thanks, Rod Vining 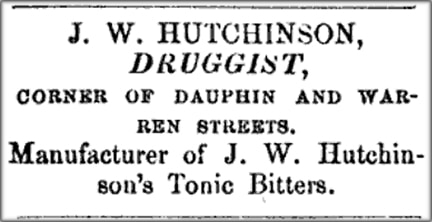 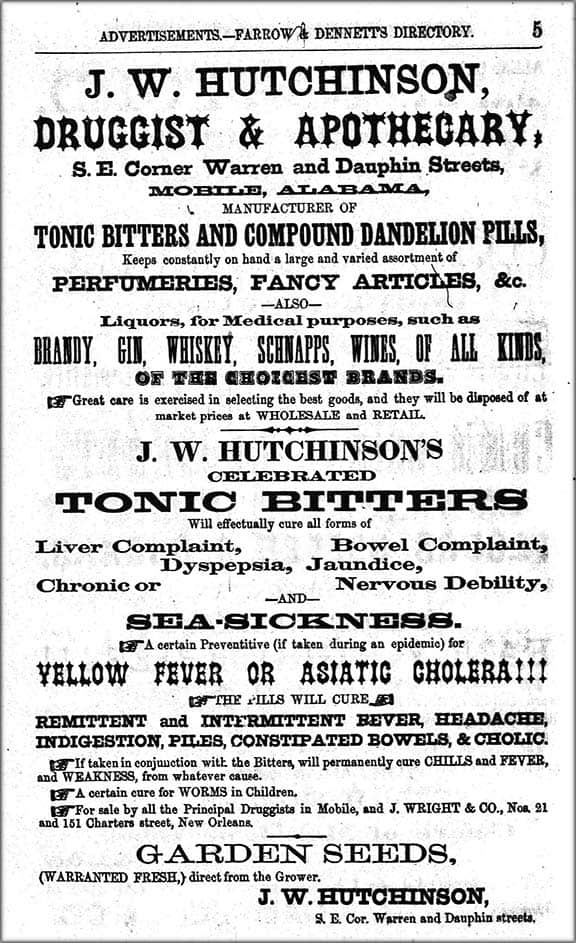 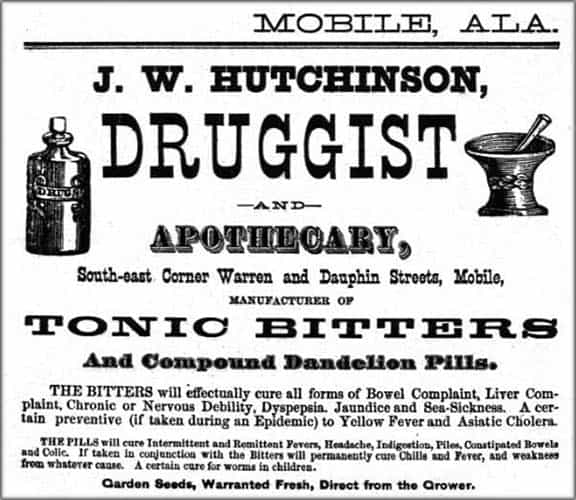 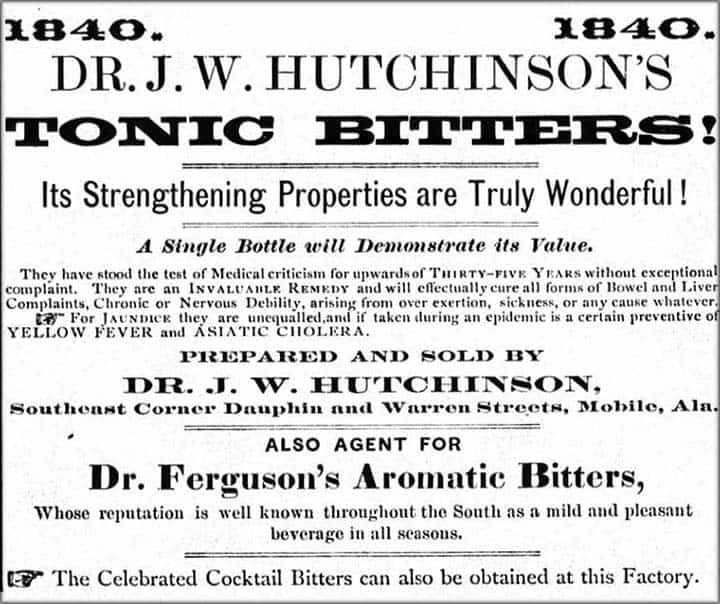 Not that a Dr. Ferguson’s Aromatic Bitters is noted above. This appears to be unlisted. The Celebrated Cocktail Bitters is in reference to the extremely rare Davidson & Company “Cocktail Bitters”. This iOS C 183 in Ring and Ham.

Ferdinand Meyer V is a native of Baltimore, Maryland and has a BFA in Fine Art and Graphic Design from the Kansas City Art Institute and School of Design. Ferdinand is the founding Principal of FMG Design, a nationally recognized design consultation firm. Ferdinand is a passionate collector of American historical glass specializing in bitters bottles, color runs and related classic figural bottles. He is married to Elizabeth Jane Meyer and lives in Houston, Texas with their daughter and three wonderful grandchildren. The Meyers are also very involved in Quarter Horses, antiques and early United States postage stamps. Ferdinand is the past 6-year President of the Federation of Historical Bottle Collectors and is one of the founding members of the FOHBC Virtual Museum.
View all posts by Ferdinand Meyer V →
This entry was posted in Advertising, Apothecary, Auction News, Bitters, Color Runs, Digging and Finding, Druggist & Drugstore, History, Tonics and tagged alabama, Apothecary, bitters, Dauphin, Druggist & Drugstore, fire, Hutchinson, Mobile, polished, pontil, Rod, Tonic, Vining, Warren. Bookmark the permalink.