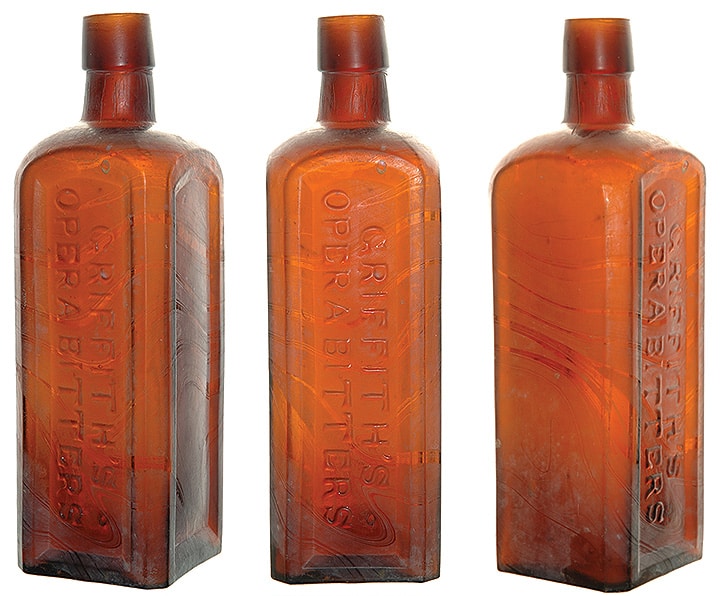 Wait to you see the gorgeous example of a Griffith’s Opera Bitters that John Pastor has in his American Glass Gallery Auction #13, now open for bidding. No, that is not it at the top of the post. That is my homely (to some) example of this very rare bitters that is a raw as the day it was found. I left it alone as it was the only one I had ever seen. I like it that way, but boy-o-boy is this new auction example a killer. 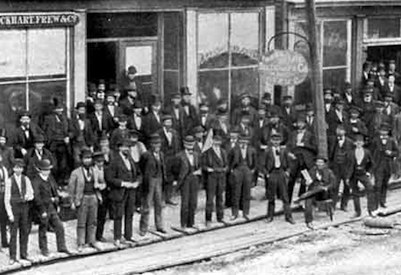 To my knowledge, this is the only bitters with the word “opera” in it. It is believed to be from Oil City, Pennsylvania and that was fairly easy to confirm as you will see. Opera and Oil City. Grease and water. Oil City is a city in Venango County, Pennsylvania that is known in the initial exploration and development of the petroleum industry. After the first oil wells were drilled nearby in the 1850s, Oil City became central in the petroleum industry while hosting headquarters for the Pennzoil, Quaker State, and Wolf’s Head motor oil companies. [Wikipedia] 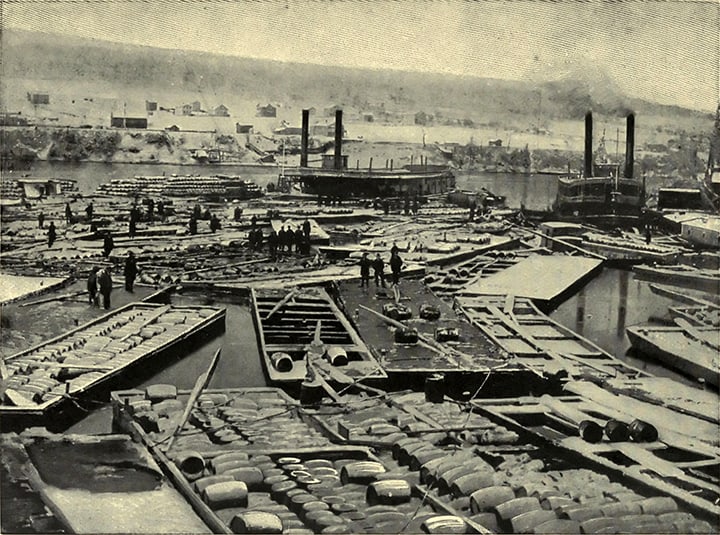 The Carlyn Ring and W.C. Ham listing in Bitters Bottles is as follows. Note that amber is very rare and yellow and green are extremely rare. You mean there are yellow and green examples out there? 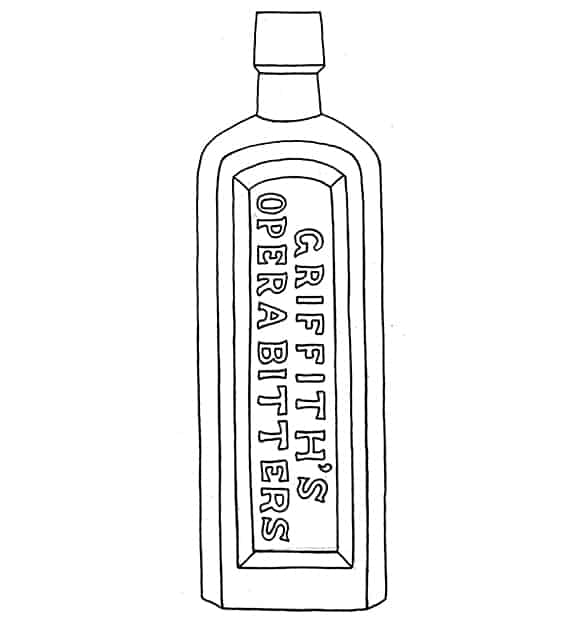 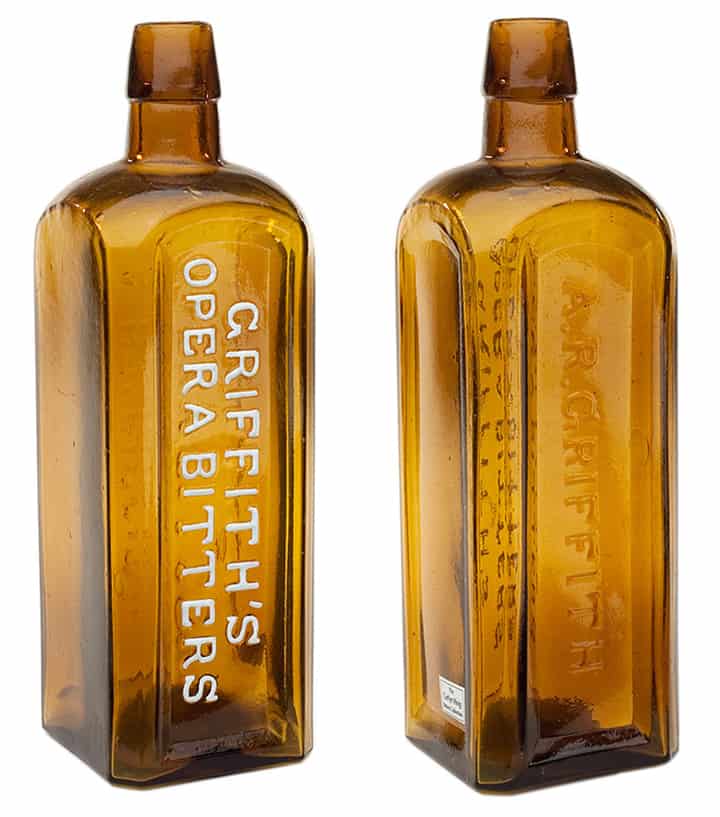 The Griffith Bothers, and there were at least three of them, were druggists and started a retail drug store business called Griffith and Brother in 1863. This was Albert R. Griffith and A.D. Griffith. Albert’s name is on the bottle. He was born in 1845.

They brothers had two drug stores in Oil City, Venango County, Pennsylvania and two stores later in New York City. Maybe one of the brothers went to New York City to get out of the oil field environment and see the opera and a few Broadway plays? Maybe adding a little culture would help this Charlie Tuna sell his bitters? In 1869, the brothers opened a second drug store opposite the Opera House on Washington Street in Oil City. As early as 1870 there were advertisements for Griffith’s Celebrated Opera Bitters. This is where the name most likely came from.

Later, younger brother Edward J. Griffith was running the show and sold the business in 1911 to Alfred W. Britton and Thomas Gaddess. Britton was previously employed as pharmacist with Griffith. That is a photography of one of their stores below. Look at all the bottles on the wall. 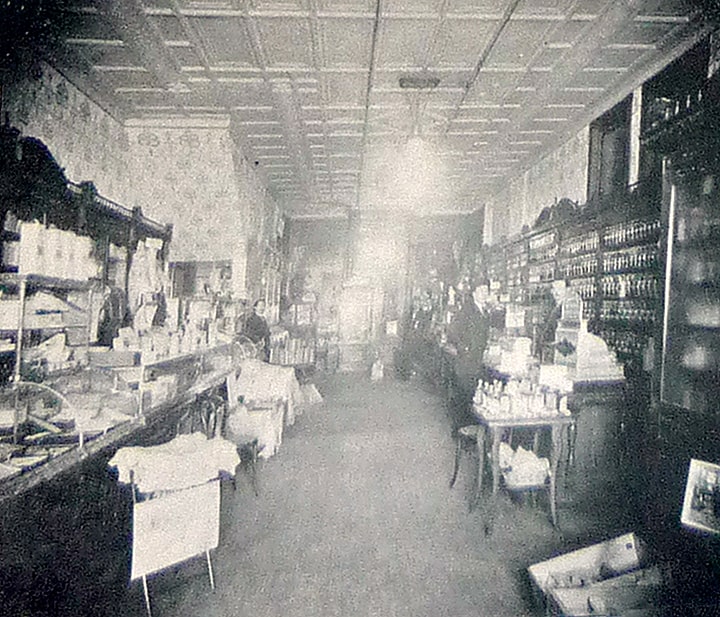 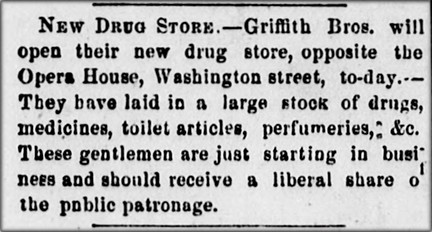 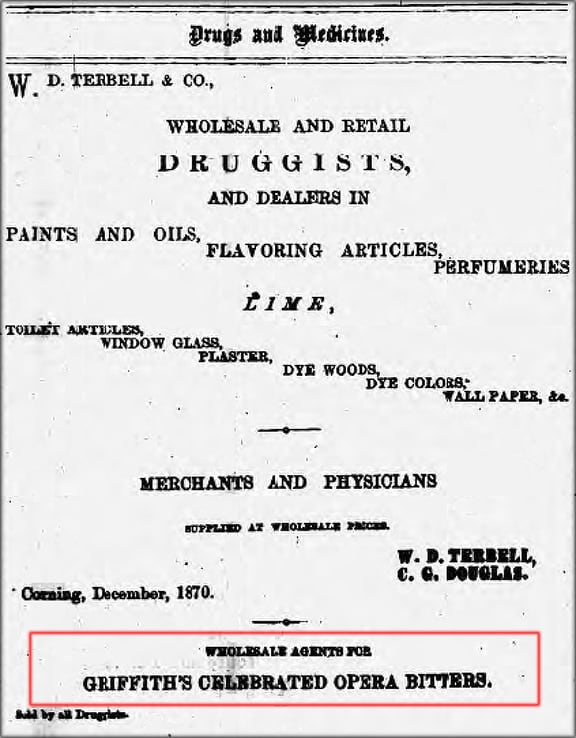 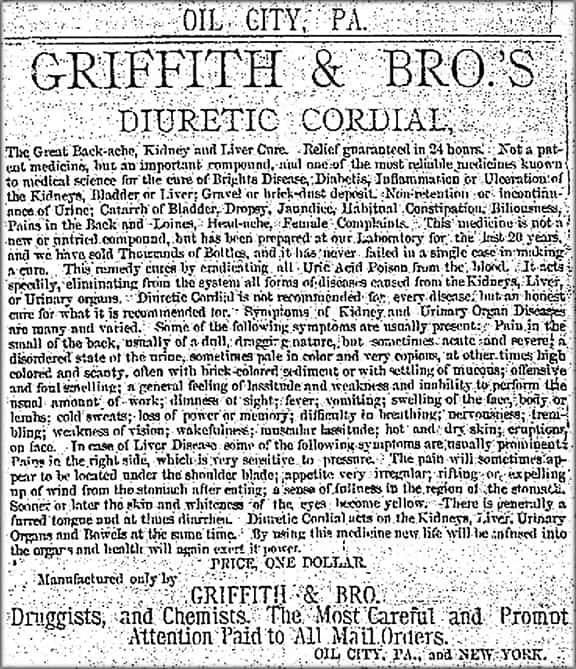 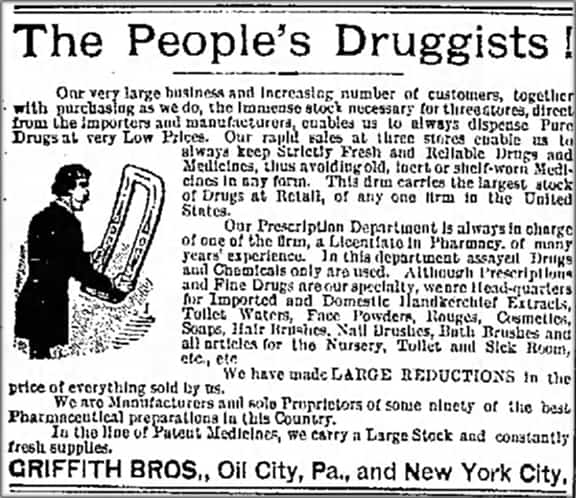 1896: Griffith & Brother listing (see below). They have two locations in Oil City and one location in New York city. 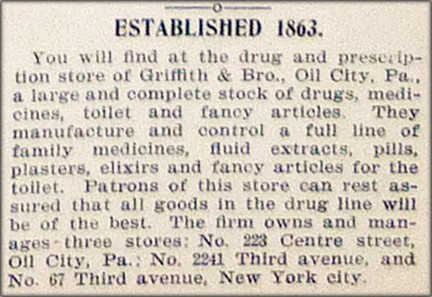 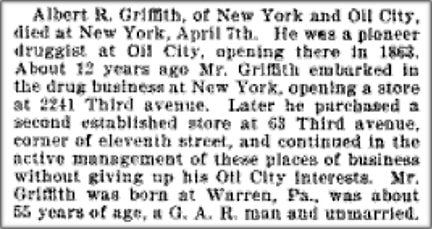 1911: Alfred W. Britton previously employed as pharmacist buys, in partnership with Thomas Gaddess, the E.J. Griffith establishment, on of the oldest drug stores in Venango County – Venango County, Pennsylvania: Her Pioneers and People

Ferdinand Meyer V is a native of Baltimore, Maryland and has a BFA in Fine Art and Graphic Design from the Kansas City Art Institute and School of Design. Ferdinand is the founding Principal of FMG Design, a nationally recognized design consultation firm. Ferdinand is a passionate collector of American historical glass specializing in bitters bottles, color runs and related classic figural bottles. He is married to Elizabeth Jane Meyer and lives in Houston, Texas with their daughter and three wonderful grandchildren. The Meyers are also very involved in Quarter Horses, antiques and early United States postage stamps. Ferdinand is the past 6-year President of the Federation of Historical Bottle Collectors and is one of the founding members of the FOHBC Virtual Museum.
View all posts by Ferdinand Meyer V →
This entry was posted in Advertising, Auction News, Bitters, Druggist & Drugstore, Medicines & Cures and tagged bitters, city, drug, Druggist & Drugstore, Griffith, oil, opera, Pennsylvania. Bookmark the permalink.