Did you see that Schrader’s Highland Bitters? 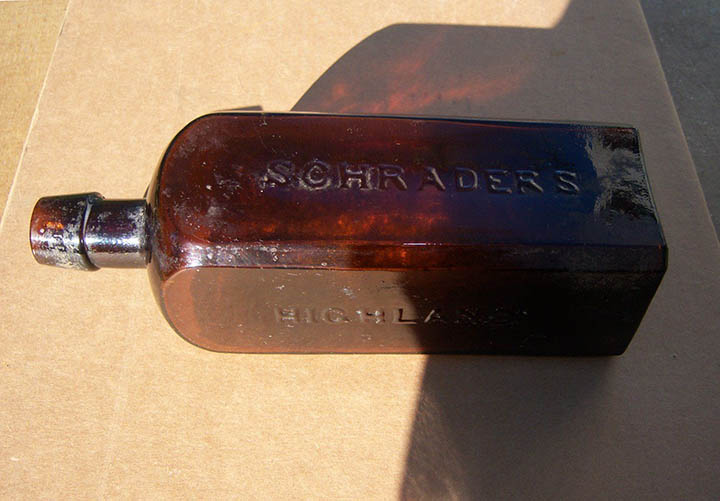 Did you see that Schrader’s Highland Bitters?

Gawd…I missed this one on eBay… hook, line and sinker, closing on Saturday, 22 October at 10:35 am. Well maybe that is part of the reason. This unlisted Schrader’s Highland Bitters closed on eBay last week with 20 bids and a closing price of $1,125. SunshineAntiques from Browning, Missouri was the seller. The location may help us find out the maker of this bitters as I have no clue. By the way, the pictures in this post are from the eBay listing. Congratulations to the new owner of the bottle (note below that measurements are needed for the bottle). See eBay listing 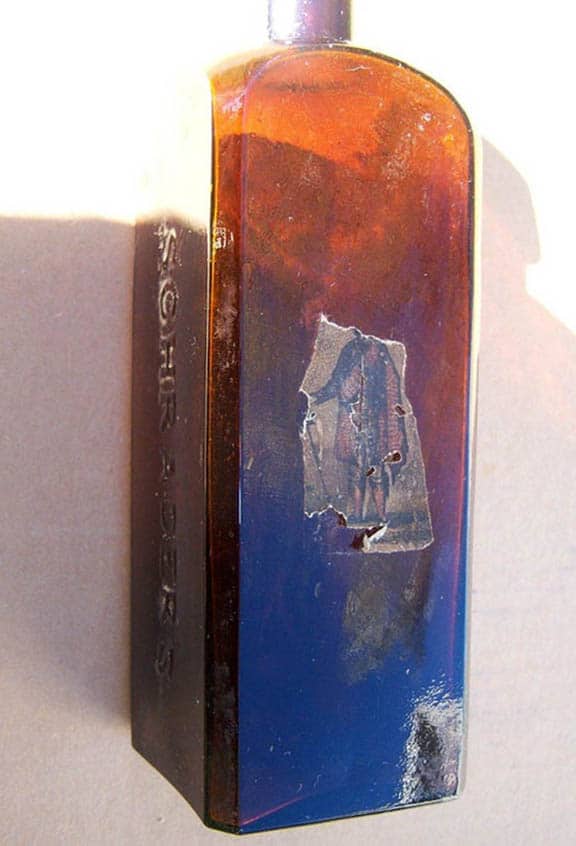 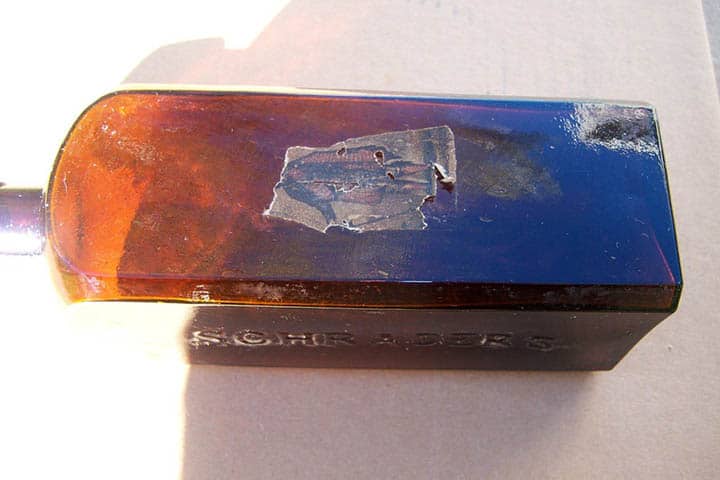 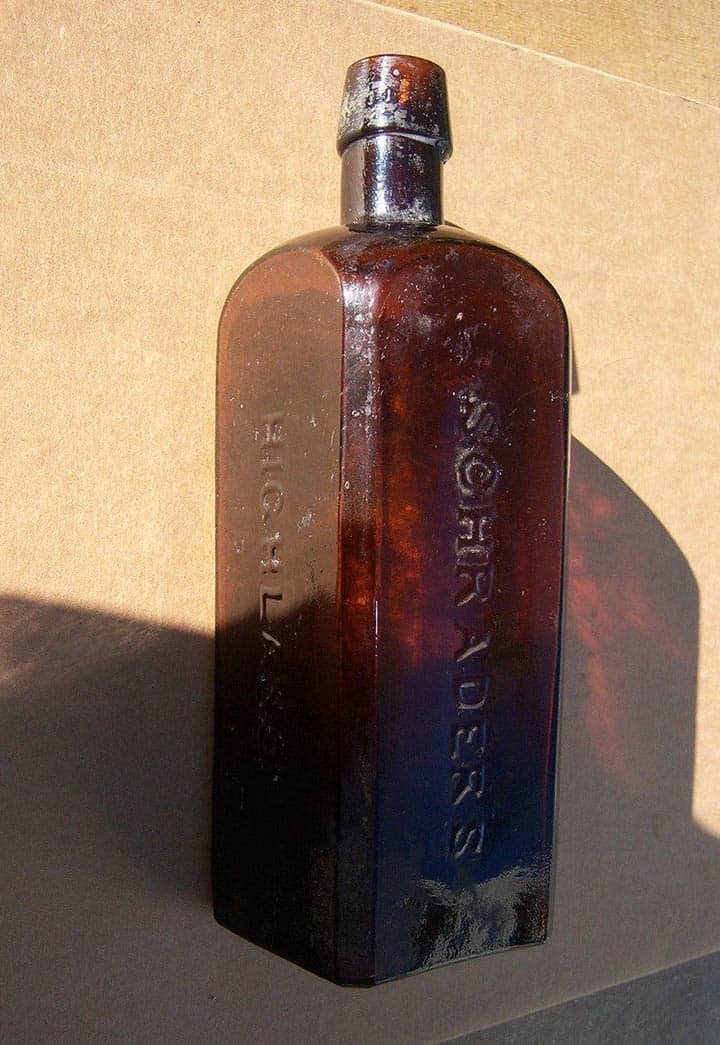 So where do we look to find information? There is no city or other information embossed or showing on what remains of the label except “SCHRADER’S HIGHLAND BITTER’S”. The portion of the label does show a Scottish Highander I presume. Wikipedia says that Schrader is a family name very common roughly within the Triangle Hannover-Hamburg-Berlin within Germany (so-called “Eastfalia”, part of today’s states of Lower Saxony and Saxony-Anhalt). It means ‘tailor.’ Carriers of this name have spread all over the world due to emigration from Germany. It is especially common in the United States, but there are also occurrences in France, Britain, and the Netherlands. 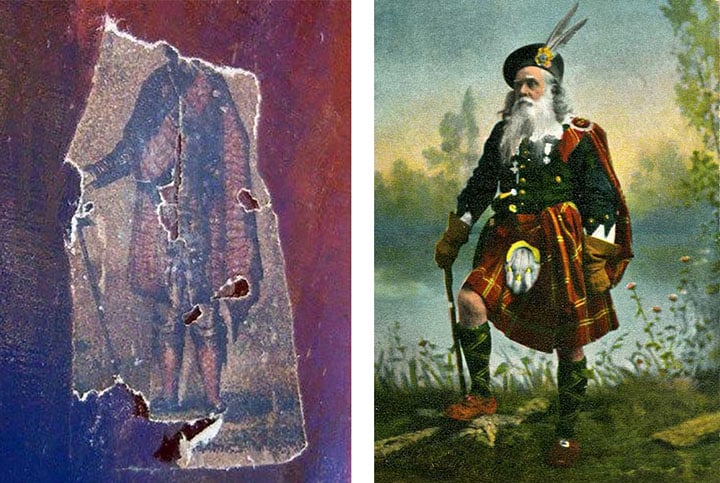 I wonder if this is related to the rather well known Highland Bitters and Scotch Tonic figural barrel from Memphis?

No, I doubt it, as that bottle is related to Mansfield & Higbee. According to information supplied by the Mansfield & Higbee Co. when advertising the HIGHLAND BITTERS AND SCOTCH TONIC, it was originally developed by Sir George Ballangal, M.D., F.R.S, professor of military surgery in the far-famed University of Edinburg, Scotland.  It seems that climatic diseases were cutting off thousands of the British and French soldiers in the Crimea during the Russian War.  Sir George  was appointed by the medical commissioners to investigate in a scientific manner the extraordinary longevity and good health which had always characterized the inhabitants of the Scottish Highlands and the deplorable results, to the same people, when exposed to a change of climate.

Sir George, by patient research, discovered that the Highlanders had been in the habit of using certain combination of herbs and roots, indigenous to their native hills and glens, which, when combined with certain oriental aromatics, was found to be the most superlative invigorator and builder up of the human system that the world or suffering humanity had ever known.

After Sir George determined that the product “proved itself equal to every emergency,” the original recipe was given to a reputable pharmaceutical firm in Edinburg to be manufactured. The product was touted to have “superiority over all other preparations or stomach medicines, either in Europe or America, that upwards of THREE MILLION BOTTLES were sold in Great Britain alone, besides upwards of 700,000 dozen to all parts of the inhabitable globe.”

The product, a short time later, was then brought to the United States in the mid-1860s and was manufactured and sold exclusively by Mansfield & Higbee, Pharmaceutical and Manufacturing Chemists and Druggists, Nos. 301 and 303 Main Street, Memphis, Tennessee. [Gene Bradberry]

Next I see that there was a August C. Schrader in Baltimore (see obituary below). He was from Hanover, Germany and came to America in 1855 or so. Remember, Schrader is a German name from the Hanover area. August came to Baltimore when he was sixteen and opened a drug store. I would like to believe that this is a Baltimore bottle but I am doubtful. Made me think of another great figural barrel, Smith’s Druid Bitters from Baltimore though. 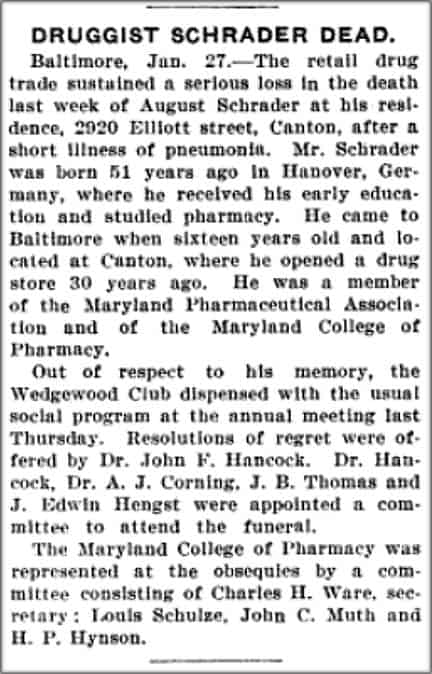 So I Google “Highland Tonic Bitters” and get a surprise as I see some advertising (see below) for an unlisted SCOTCH TONIC BITTERS made by the Highland Mineral Water Company from Dallas, Pennsylvania in The Scranton Republican (Pennsylvania) in 1896. Way, way to late here.

Advertisement for SCOTCH TONIC BITTERS made by the Highland Mineral Water Company from Dallas, Pennsylvania in The Scranton Republican (Pennsylvania) in 1896.

Next I try to put myself closer to the middle of the country and Browning, Missouri and find the following that is just interesting. Not really a good lead. I have a feeling though that later this will be valuable information for another bitters, so I park it here.

There were two children — J. T. and Henry, both residents of Owensboro. Mr. Higgins came to this city with his parents when small and was educated here and at St. Joseph’s College, Bardstown, Ky. In 1855 he commenced the study of medicine with Dr. J. W. Compton, now of Evansville, Ind. The next year he went into the drug store of S. J. Howard, to learn the trade of a druggist. He was there a year and then went to St. Joseph’s College and remained a part of two years. He then returned to Owensboro and resumed the study of medicine with Drs. J. W. Compton and J. F. Kimbley, with the intention of becoming a physician. He remained with them a year and a half when the war broke out, and he went with Dr. Kimbley, as a medical cadet, in the Eleventh Kentucky Volunteer Infantry. In the spring of 1862 he was commissioned Assistant Surgeon of the regiment and served until October, 1864, when he was discharged at Bowling Green, Ky. After his return to Owensboro he was appointed Deputy Sheriff, under J. G. Harrison, and held that office a year. In 1866 he went into the sewing-machine business, having four counties under his supervision. In 1874 he formed a partnership with V. P. Wells in the drug business, under the firm name of Wells & Higgins. At the end of the year Mr. Wells retired, J. W. Carter taking his place and changing the name to Carter & Higgins. Feb. 1, 1876 they sold the business to J. C. Schrader. In August, 1876, Mr. Higgins opened a store in Knottsville, but only remained there till October, 1877. Jan. 3, 1878, he opened a store in Owensboro on Third street, where he remained two years and then removed to his present location, known as the Planters’ House drug store. Dec. 20, 1865, He married Kate N., daughter of Richard S. and Mira (Riley) Windsor. She was born in Daviess County, and educated at Louisville, Ky., and St. Francis Academy, Owensboro. They have three children —Eloise, John K. and Robert P. Two children, Ida M. and Joseph, died in infancy. Mr. Higgins has been connected with the Catholic church from his infancy. Mrs. Higgins’s father died in 1818 and her mother in 1858.

Looking specifically at Missouri, where the bottle was sold from, I see that there was a Edward Schrader who was a retail druggist at 14th & Morgan in St. Louis, Missouri. He was from Germany and born in 1828. Directory listings are from 1867 to the late 1880s. He could be our guy but I see no more clues than this. Browning. Missouri is a small town closest to St. Joseph and northeast of Kansas City.

Enough of this sleuthing for now. I need to do some business work. Can you all help me out here? Maybe this post will smoke some info out.

Super detective Marianne Dow found the following advertisement in the North Missouri and Eastern Kansas Business Directory, for 1867-8. Apparently the brand is also listed in Bottled in Illinois. So, Schrader’s Highland Bitters is from Quincy, Illinois! 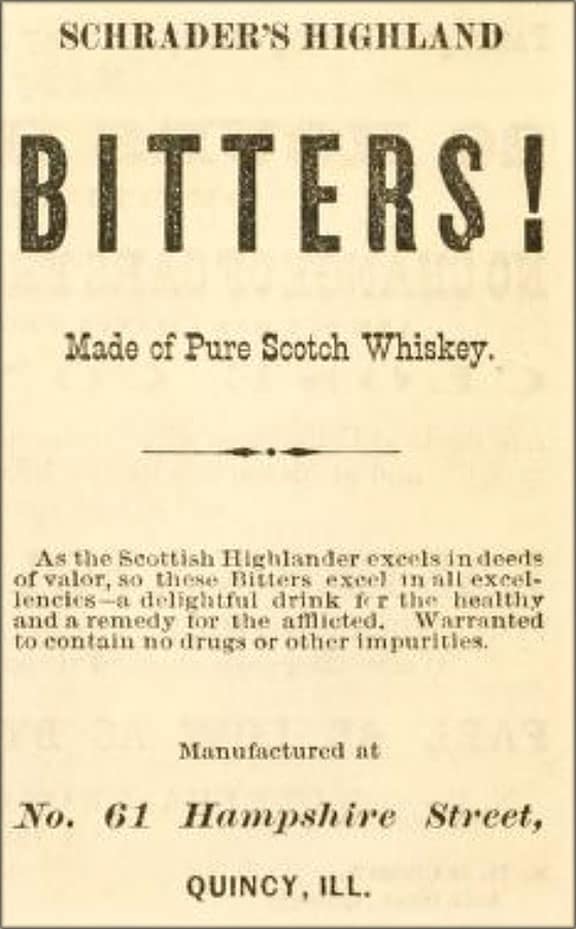 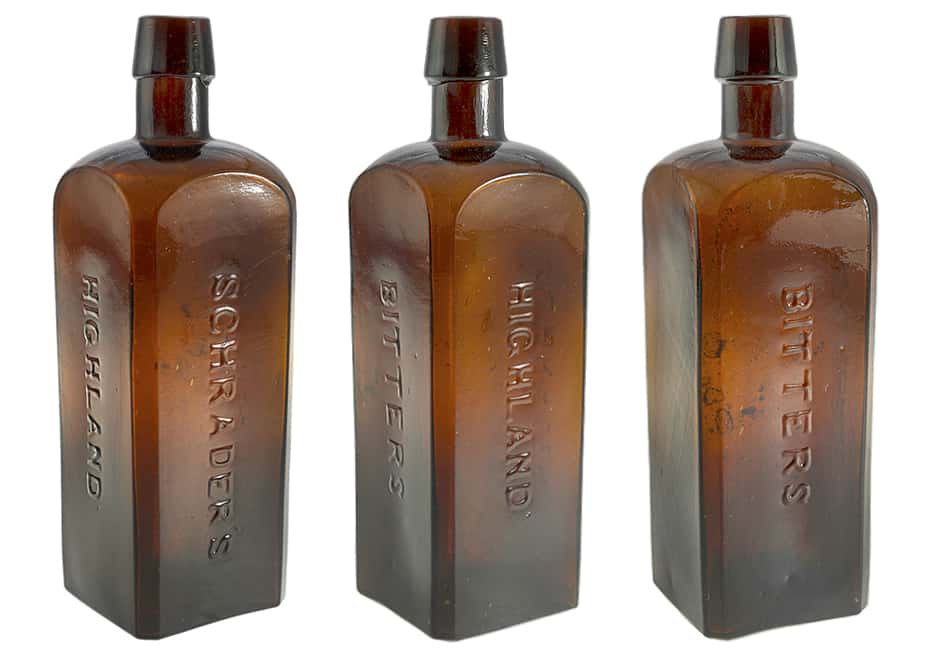 185. “SCHRADER’S – HIGHLAND – BITTERS”, (unlisted), American, ca. 1865 – 1875, amber, 8 3/4”h, smooth base, applied mouth. Some light inside dried contents remain, but no form of damage. Considering how many Bitters bottles are listed its a great rarity when one comes along that isn’t! The company was located at No. 61 Hampshire Street in Quincy, Illinois. – Glass Works Auctions | Auction 106

Ferdinand Meyer V is a native of Baltimore, Maryland and has a BFA in Fine Art and Graphic Design from the Kansas City Art Institute and School of Design. Ferdinand is the founding Principal of FMG Design, a nationally recognized design consultation firm. Ferdinand is a passionate collector of American historical glass specializing in bitters bottles, color runs and related classic figural bottles. He is married to Elizabeth Jane Meyer and lives in Houston, Texas with their daughter and three wonderful grandchildren. The Meyers are also very involved in Quarter Horses, antiques and early United States postage stamps. Ferdinand is the past 6-year President of the Federation of Historical Bottle Collectors and is one of the founding members of the FOHBC Virtual Museum.
View all posts by Ferdinand Meyer V →
This entry was posted in Advertising, Bitters, Druggist & Drugstore, eBay, History, Medicines & Cures, Questions and tagged bitters, Browning, Dow, eBay, Germany, Hanover, Highland, illinois, Marianne, Missouri, Quincy, Schrader, Schrader's. Bookmark the permalink.