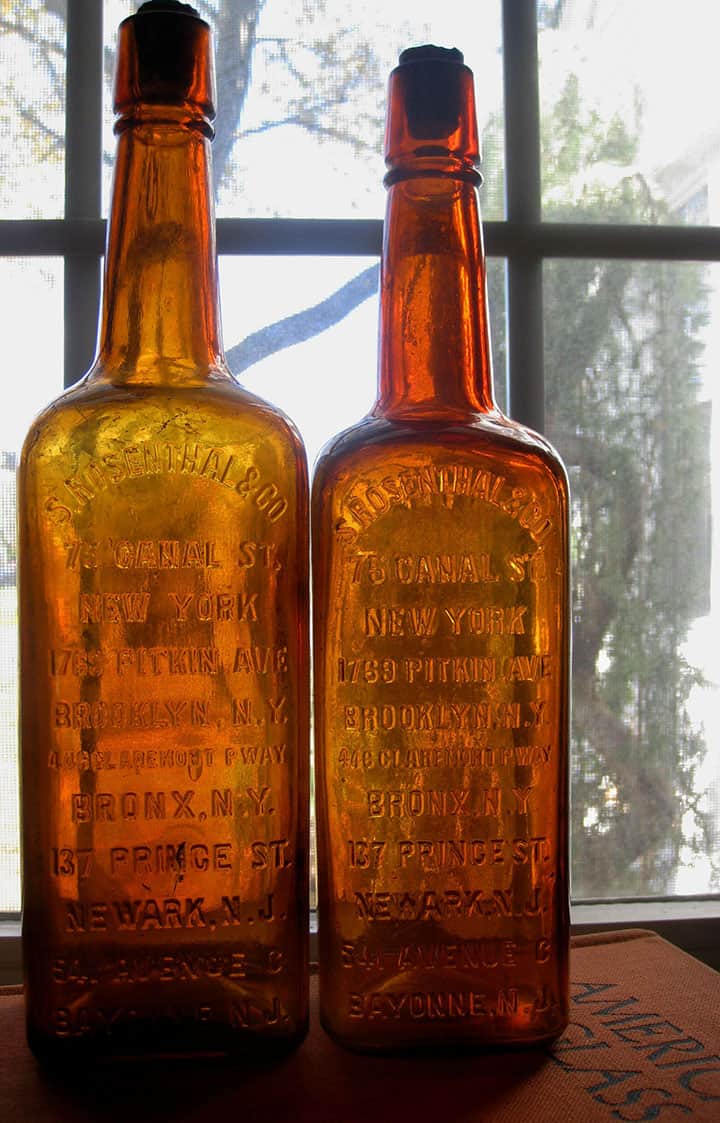 Recently, I have corresponded with Chris Eib regarding various bottle related topics and during this exchange, Chris sent me the picture above of two S. Rosenthal & Co. bottles with a ton of embossed addresses. Kind of cool. The e-mail, “Perhaps you can see what you can come up with on the two S. ROSENTHAL & CO. square whiskies in that last picture. The larger one is a 30 oz. and the other, a 24 oz. The Corning Museum of Glass has one in their collection which was donated, but other than that, I’ve never come across any others. Your resources are MUCH better than mine and I have faith that you’ll be able to come up with a little information on these bottles. Thanks Ferdinand. Take care and have a good night.”

Actually searching for “Rosenthal” around the turn of the century in America is almost as challenging as looking for “Smith” or “Jones”. Amazing how many Rosenthal listings there are in New York in 1910. Even a tighter search for “S. Rosenthal” or “Samuel Rosenthal” yields quite a few options. Obviously the clues are related to the addresses

The Canal address points us to Edward S. and Herman L. Rosenthal who were Jewish brothers selling liquor in New York City. Their father was Samuel Rosenthal who was born in Russia and operated a Saloon in New York City in 1900. S. Rosenthal & Co. was named after him. I found listings for all three Rosenthals, and a partner Samuel A. Kassell (1873-1930) from 1900 to 1919. Samuel Kassell was married to a sister, Minnie Rosenthal (1877-1945). Looks like they had five liquor stores around the region.

Interesting that Chris has not seen many examples except his two sizes and the one in the Corning Museum of Glass which is represented above. 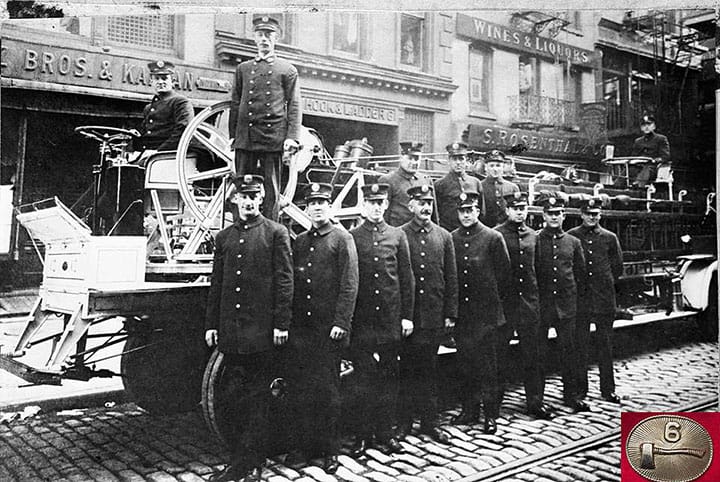 Ferdinand: I thought you might enjoy the enclosed photo which shows my great-grandfather Lieutenant John Joseph Jolly standing on a wooden aerial with the men under his command in front of Ladder 6 in 1913 next to the S. Rosenthal store. A friend of mine saw your post and knew of my photo, and sent your link to me. I have no doubt my great-grandfather and his men enjoyed some of the spirits sold therein.

Ferdinand Meyer V is a native of Baltimore, Maryland and has a BFA in Fine Art and Graphic Design from the Kansas City Art Institute and School of Design. Ferdinand is the founding Principal of FMG Design, a nationally recognized design consultation firm. Ferdinand is a passionate collector of American historical glass specializing in bitters bottles, color runs and related classic figural bottles. He is married to Elizabeth Jane Meyer and lives in Houston, Texas with their daughter and three wonderful grandchildren. The Meyers are also very involved in Quarter Horses, antiques and early United States postage stamps. Ferdinand is the past 6-year President of the Federation of Historical Bottle Collectors and is one of the founding members of the FOHBC Virtual Museum.
View all posts by Ferdinand Meyer V →
This entry was posted in History, Liquor Merchant, Questions, Spirits, Whiskey and tagged Canal, Edward, Eib, fire, Herman, Jew, Jolly, keeper, Ladder, liquor, Rosenthal, Russia, Saloon, Samuel. Bookmark the permalink.