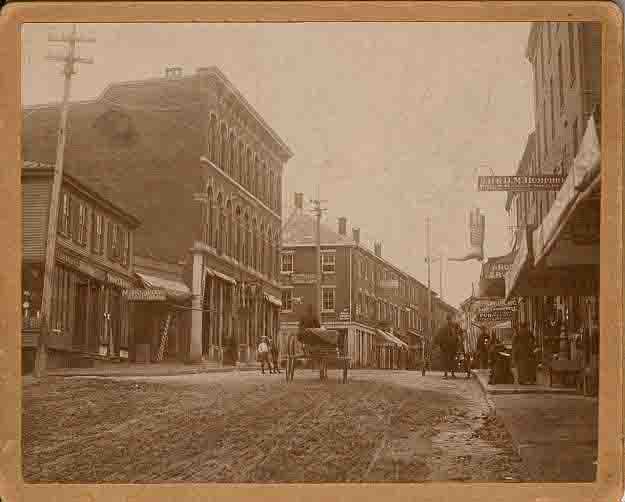 While visiting some of the Bath, Maine city directories the other day for the Hunk Dori Bitters post, I came across an advertisement below for Anderson’s Wine Restorative Bitters. The proprietor was S. Anderson & Son who were druggists and apothecaries at the corner of Front and Arch Streets in Bath, Maine. The old photograph above, from the Maine Historical Society, shows Front and Arch streets in 1892. If you look closely, on the right side of the street, beyond the hanging boot, I believe you can see a portion of the Anderson drug store sign. This bitters appears to be unlisted in Ring & Ham. 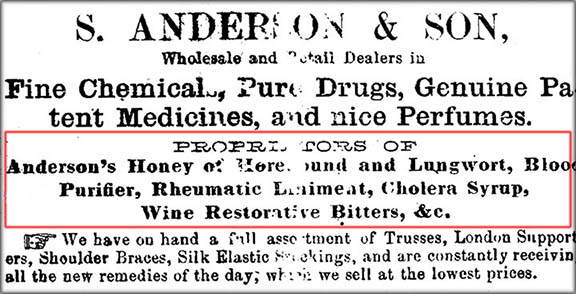 Dr. Samuel Anderson was born in Deering, New Hampshire on March 9, 1807. He was the third of ten children of John and Nancy Anderson, of Deering. His ancestors came to New England from Londonderry, in the north of Ireland, in 1718. They were Scotch Presbyterians, driven from their homes by religious persecution. The grandfather, named Samuel, was captain of one of the ships that brought over these Londonderry immigrants, most of whom settled in New Hampshire and named their settlement “Londonderry,” in memory of their old home. Doctor Anderson was married, November 20, 1829, to Katharine Emerson of Edgecomb, who descended from the Emersons of Massachusetts. She was great-granddaughter of the Rev. John Emerson, fourth parson of Topsfield.

Anderson came to Bath in 1834. A few years later he commenced the study and practice of medicine and subsequently opened a drug store, where he continued in business the remainder of his life. Advertising read, “Dr. S. Anderson”, Eclectic Physician”. He had five children, Edward Francis, Climena Katharine, Samuel Jr., Nancy Elizabeth, and Laura Ann. Samuel, Jr., was born in Bath on September 7, 1835. Samuel Jr. entered his father’s drug store at the age of nineteen, was afterward received as partner, and continued in the drug business his entire life. He married Almina Martha Norton, of Phillips, Maine. Their children were Harry Warren and Herbert Morrell. Harry Warren graduated at the College of Pharmacy in Philadelphia, in 1884, and has since been in the drug business in Exeter, New Hampshire. Dr. Samuel Anderson died in Bath, Maine on April 22, 1873. 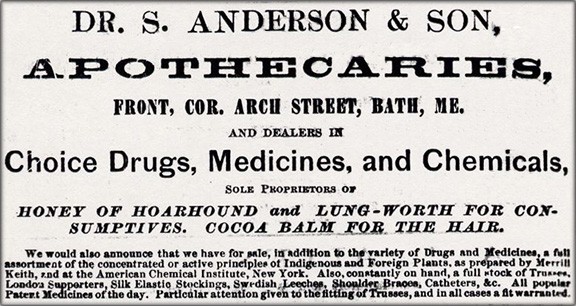 Dr. S. Anderson, Dr. Anderson & Son and S. Anderson & Son ran advertisements for their business from at least 1856 to 1868 though the drug store operated up until 1902 or so. As mentioned earlier, they ran their Apothecary and Drug Store on the corner of Arch and Front Streets. They were dealers in “Choice Drugs, Medicines, and Chemicals.” They had several proprietary medicines, including Anderson’s Honey of Hoarhound, Lung-Worth for Consumptives, Cocoa Balm For The Hair, and Wine Restorative Bitters. 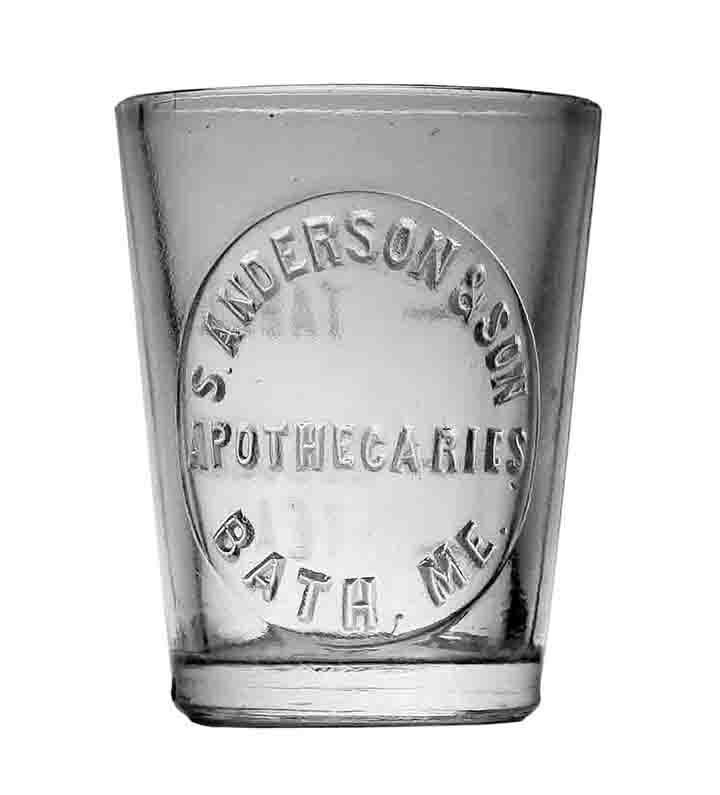 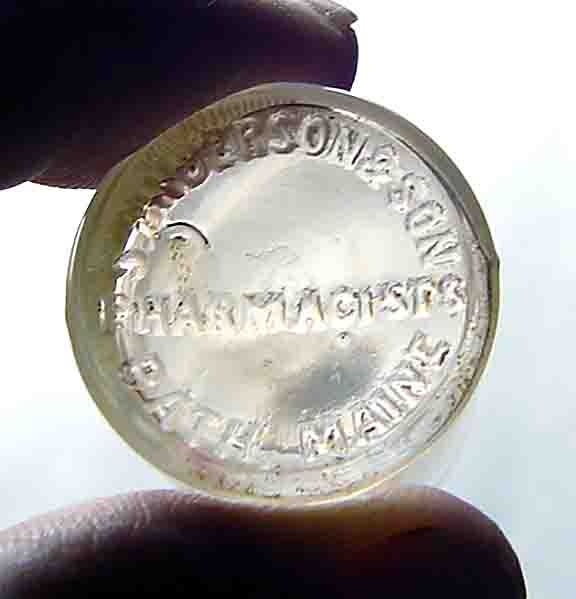 S. Anderson & Son embossing on base of bottle – I dug this unusual druggist bottle here in Bath, Maine. It is round 1″ x 2 1/2″ and only embossed on the base. Embossed S. ANDERSON & SON / PHARMACISTS / BATH, MAINE – Ye Olde Prospector – Antique-Bottles.net

As far as finding a bottle embossed, “Anderson’s Wine Restorative Bitters”, I’m afraid we are out of luck. Just the advertising reference in 1867 above and a few support pictures from S. Anderson & Son.

Ferdinand Meyer V is a native of Baltimore, Maryland and has a BFA in Fine Art and Graphic Design from the Kansas City Art Institute and School of Design. Ferdinand is the founding Principal of FMG Design, a nationally recognized design consultation firm. Ferdinand is a passionate collector of American historical glass specializing in bitters bottles, color runs and related classic figural bottles. He is married to Elizabeth Jane Meyer and lives in Houston, Texas with their daughter and three wonderful grandchildren. The Meyers are also very involved in Quarter Horses, antiques and early United States postage stamps. Ferdinand is the past 6-year President of the Federation of Historical Bottle Collectors and is one of the founding members of the FOHBC Virtual Museum.
View all posts by Ferdinand Meyer V →
This entry was posted in Advertising, Apothecary, Bitters, Druggist & Drugstore, History, Medicines & Cures and tagged anderson, Anderson's, apothecaries, arch, Bath, bitters, chemicals, drug, Eclectic, Front, Maine, Medicine, physician, Restorative, Samuel, son, Wine. Bookmark the permalink.