So who made Burkhart’s Homestead Bitters?

So who made Burkhart’s Homestead Bitters?

Sometimes you just have to throw something at the wall and see if it sticks. I picked up the extremely rare Burkhart’s Homestead Bitters back in June on eBay. Both pictures are from the seller. The bottle is from Fond du Lac, Wisconsin. Just today I opened the box to look at the bottle. I am not kidding, I am so backed up with work, travel and Federation business, that I have not opened or inspected some incoming bottles. I feel a bit foolish but it is what it is.

The only medicine-related Burkhart that I could find in that period, within the region, was a Dr. William Sherman (W. S.) Burkhart. He was born in 1864 and was in the patent medicine business in Cincinnati, Ohio. Burkhart claimed that he had discovered the greatest blood purifier ever. Six months treatment with one of his vegetable compounds cost one dollar. I find no record of Burkhart in Fond du Lac but he did advertise in their local Commonwealth Reporter newspaper. He would have had to put out the bitters in his late teens or very early twenties though.

Here is where is gets interesting as Congress, during our time period, was offering 160 acres of free land as an incentive to settle in Florida. As a result homesteaders were flocking to the south Dade area for free land, however Congress remained steadfast that the thirty-six square mile prime land tract given to the Perrine heirs was the Perrine Grant and could not to be homesteaded. By 1886, many families had taken over parts of the grant and built farms. They formed what was known as a “Squatter’s Union” in order to protect their rights, hiring a Dr. Cutler as their representative.

This Dr. W. S. Burkhart from Cincinnati, took advantage of this deal and actually owned hundreds of acres of land in the Southern portion of Homestead, Florida. He later, in 1930, was listed as a real estate salesman. The agriculturally rich area of Homestead was an important component of Miami-Dade County, so were the small communities located between Miami and Homestead. Communities named Cutler, Kendall, Perrine, Peters, and Princeton. F. S. Morse described Dr. W. S. Burkhart as “a very enthusiastic and apparently well-to-do patent medicine man, who has bought considerable property in this county and whose disposition is in the way of growing vegetables and fruits.”

Well that is all I have. A man named Burkhart who put out Burkhart’s Homestead Bitters in Fond du Lac and a patent medicine doctor named W. S. Burkhart who bought land in Homestead, Florida. Kind of a stretch. Do you all know anything? Maybe bitters collector Jeff Burkhardt from Wisconsin knows something? 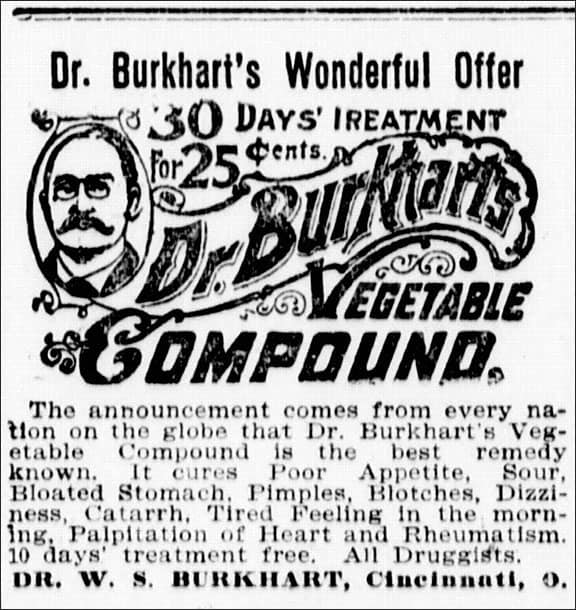 Ferdinand Meyer V is a native of Baltimore, Maryland and has a BFA in Fine Art and Graphic Design from the Kansas City Art Institute and School of Design. Ferdinand is the founding Principal of FMG Design, a nationally recognized design consultation firm. Ferdinand is a passionate collector of American historical glass specializing in bitters bottles, color runs and related classic figural bottles. He is married to Elizabeth Jane Meyer and lives in Houston, Texas with their daughter and three wonderful grandchildren. The Meyers are also very involved in Quarter Horses, antiques and early United States postage stamps. Ferdinand is the past 6-year President of the Federation of Historical Bottle Collectors and is one of the founding members of the FOHBC Virtual Museum.
View all posts by Ferdinand Meyer V →
This entry was posted in Advertising, Bitters, eBay, History, Medicines & Cures, Questions and tagged bitters, Burkhardt, Burkhart, Cincinnati, Dr. W. S. Burkhart, eBay, florida, Fond du Lac, Homestead, ohio, Wisconsin. Bookmark the permalink.