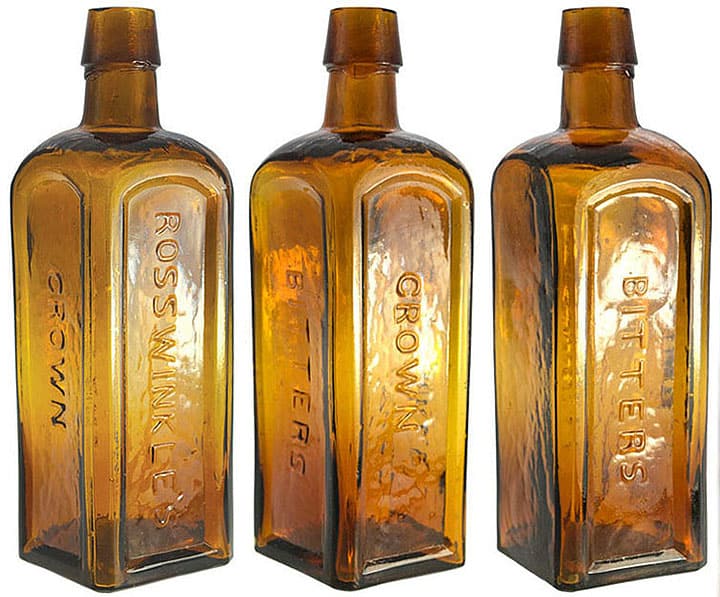 Here is another great bitters that I picked up as a floor sale at the 2014 Lexington National Antique Bottle Show. The Rosswinkle’s Crown Bitters. I had been tracking this example and was glad to bring it home. Highly whittled and a great color, it will proudly join my collection. 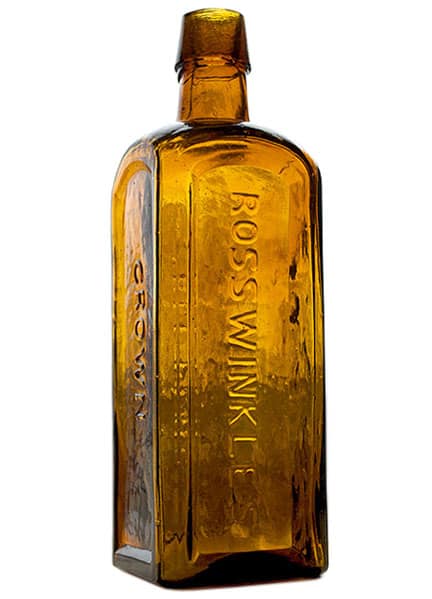 This bottle had previously shown up at a Glass Works Auctions event with the following description:

“ROSSWINKLE’S – CROWN – BITTERS”, (R-102), American, ca. 1865 – 1875, yellowish amber, 9”h, smooth base, applied mouth. Pristine perfect condition in a bright color and with highly whittled glass! We auctioned this bottle in 1996 and have not seen one since! Ex. Carlyn Ring Collection.

I also had these pictures above that were in my files. I can not attribute them to any one person but I believe this is a different example.

I am going to go out on the limb here, but using the powerful search engines of Ancestry.com, I was able to enter “Rosswinkle” in the 1870 era and got a hit for a Herman Rosswinkle in Cincinnati, Ohio. He was at first running a coffee house and then was a saloon keeper for many years. I will hang my hat here unless some other door opens. With no advertising, trade cards or a label, this is a tough one.

Ferdinand Meyer V is a native of Baltimore, Maryland and has a BFA in Fine Art and Graphic Design from the Kansas City Art Institute and School of Design. Ferdinand is the founding Principal of FMG Design, a nationally recognized design consultation firm. Ferdinand is a passionate collector of American historical glass specializing in bitters bottles, color runs and related classic figural bottles. He is married to Elizabeth Jane Meyer and lives in Houston, Texas with their daughter and three wonderful grandchildren. The Meyers are also very involved in Quarter Horses, antiques and early United States postage stamps. Ferdinand is the past 6-year President of the Federation of Historical Bottle Collectors and is one of the founding members of the FOHBC Virtual Museum.
View all posts by Ferdinand Meyer V →
This entry was posted in Bitters, History, Liquor Merchant and tagged bitters, Cincinnati, Herman, ohio, Rosswinkle. Bookmark the permalink.