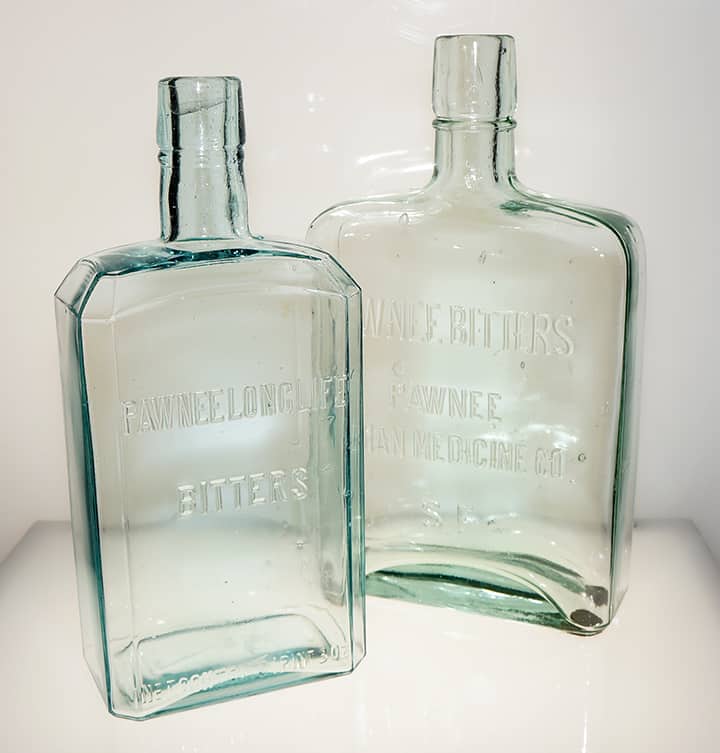 I was able to add a second Pawnee Indian Medicine Company bottle to my collection at the Lexington National. I already had a very rare Pawnee Bitters from the Feldmann collection. This new bottle is also aqua and is a different rectangular shape. It is embossed Pawnee Long Life Bitters and is rated extremely rare. Both are from San Francisco and are pictured above. Was this just another example of using an Indian reference in a bitters product name or is there a real Indian story here? You bet there is!

The Carlyn Ring and W. C. Ham listing in Bitters Bottles for the two bottles is as follows: 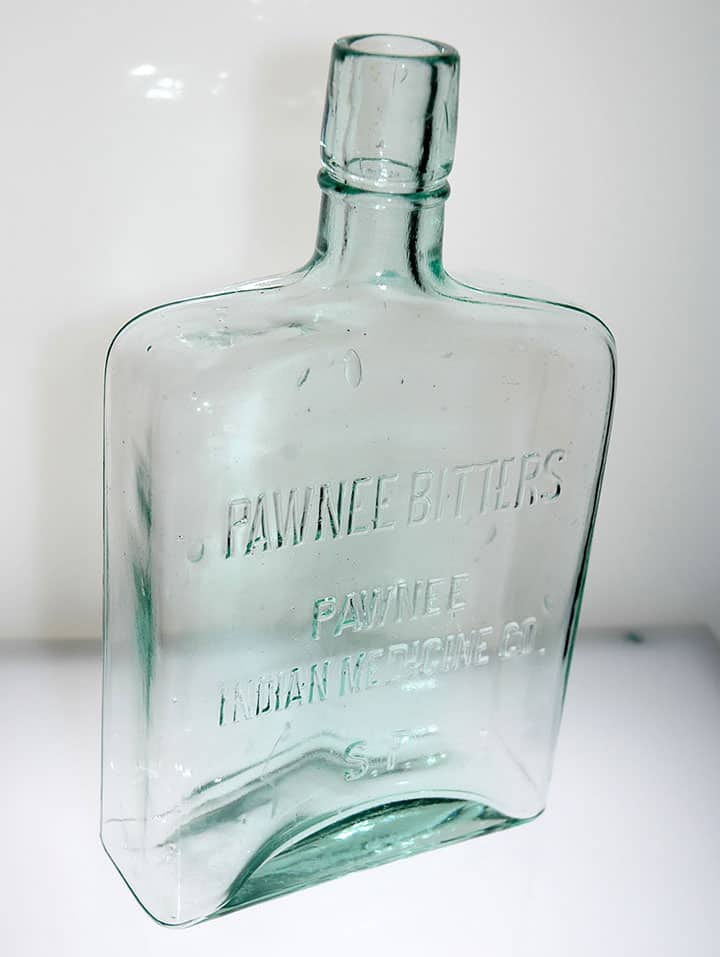 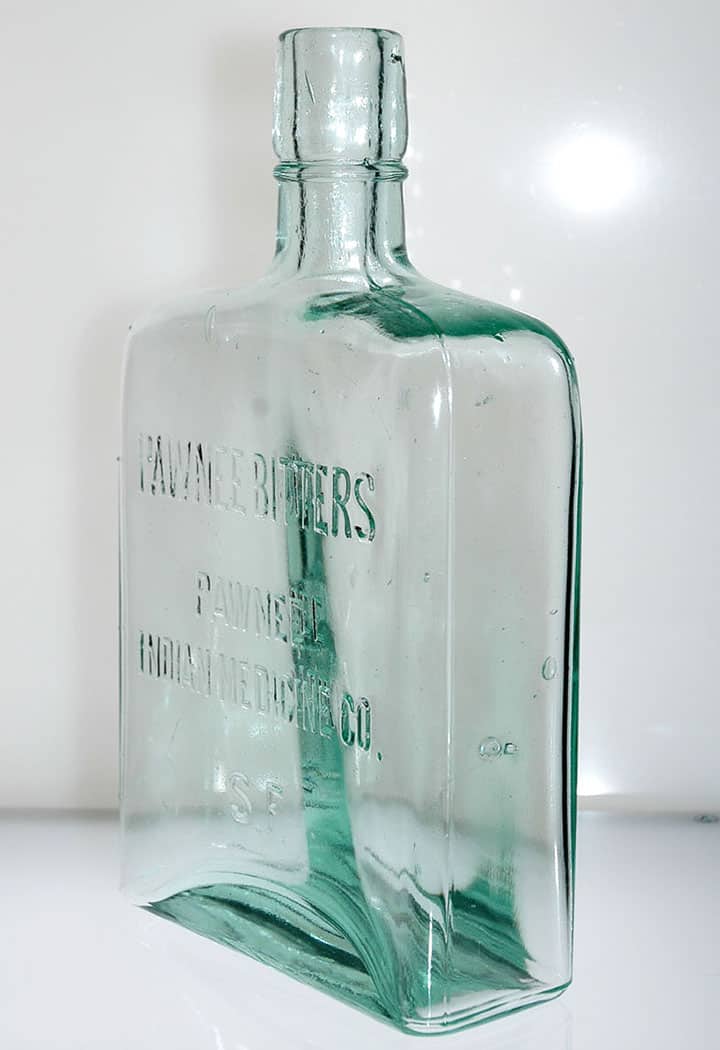 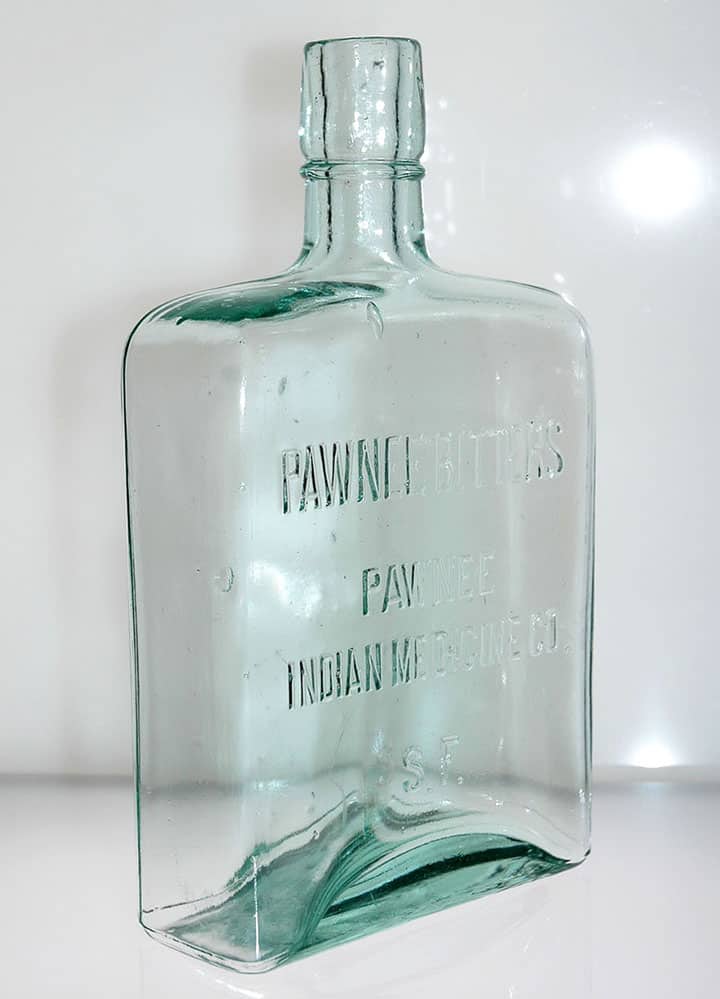 This advertising fan is from Joe Gourd. G. Rottanzi first put out the Long Life Bitters. 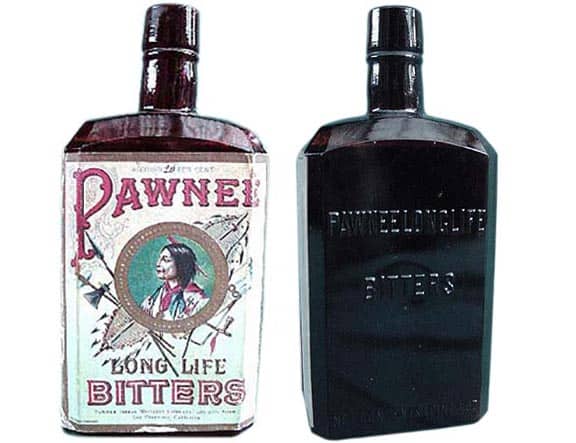 P 35 Pawnee Long Life Bitters in amber, bottled in San Francisco, California. Beautiful color label, scan does not do it justice. Measures 8″ tall, 3 3/4″ wide and 2 1/4″ deep. Bottle is embossed with Pawneelonglife Bitters on the back side. Never opened, with original contents and cork. Bottle has notched corners. – AntiqueBottles.com 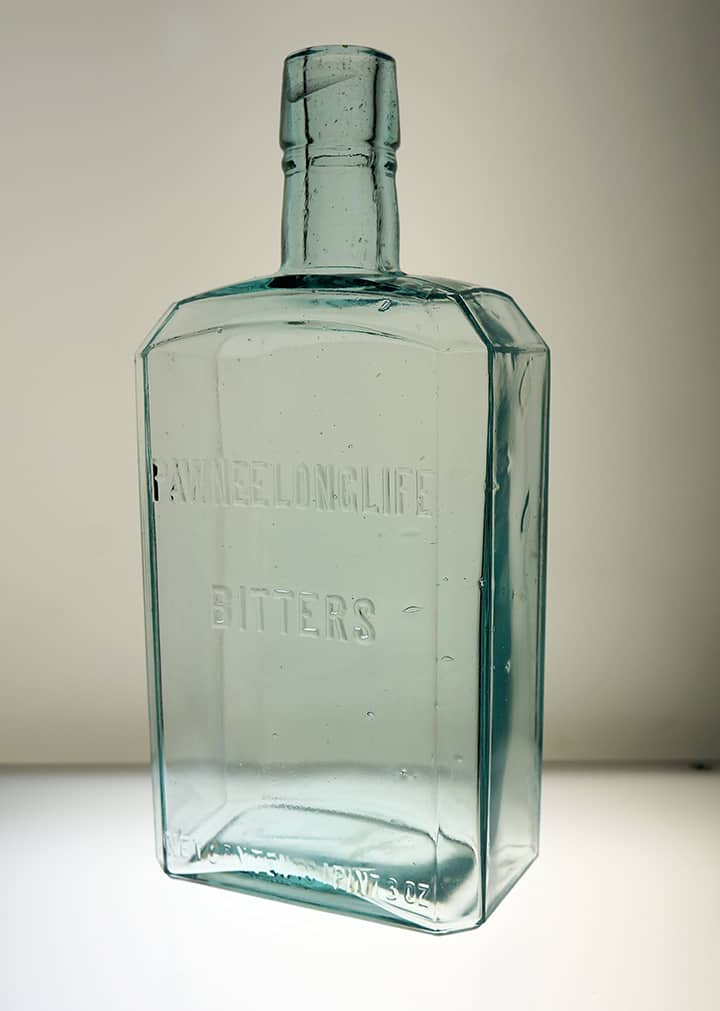 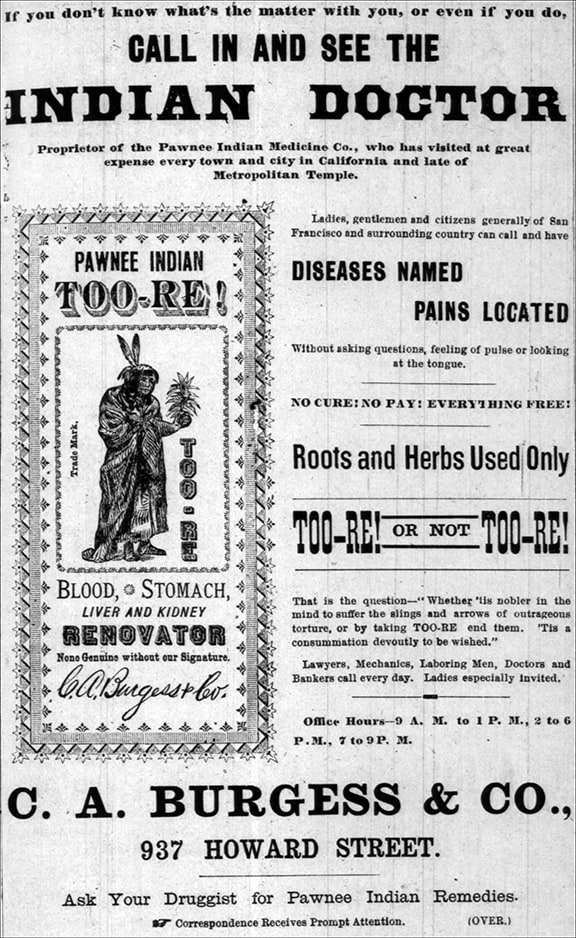 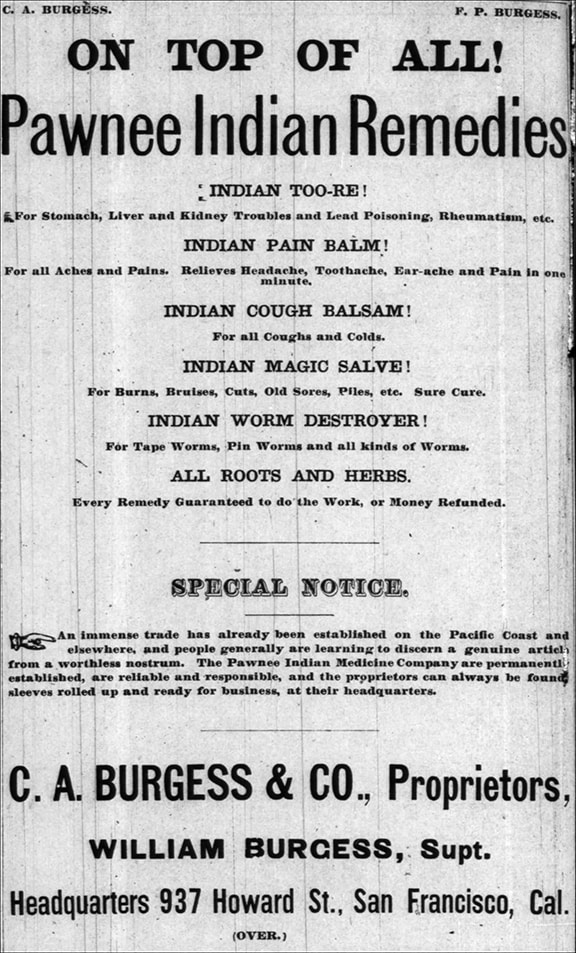 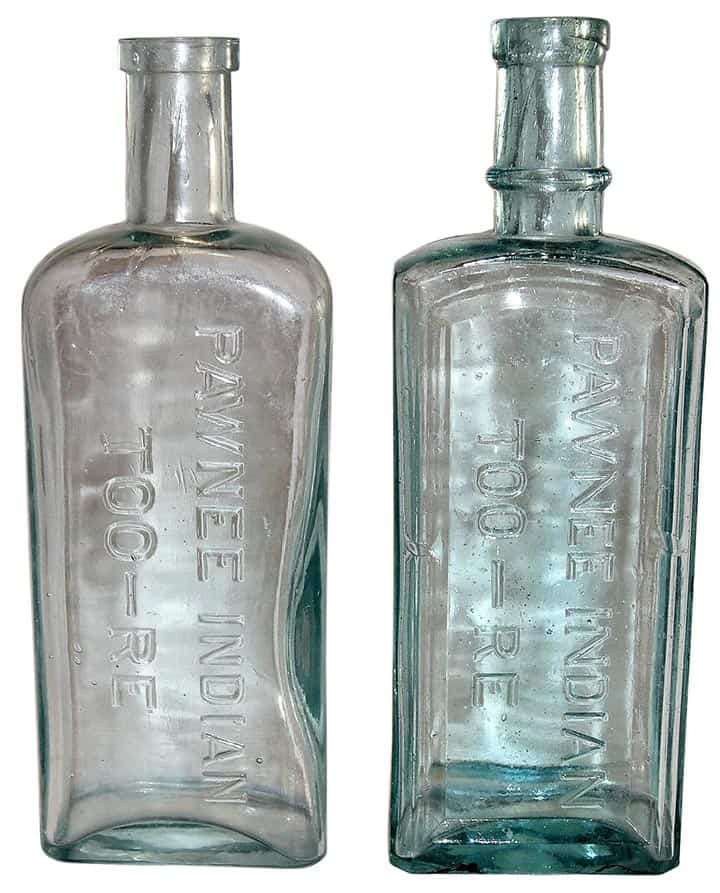 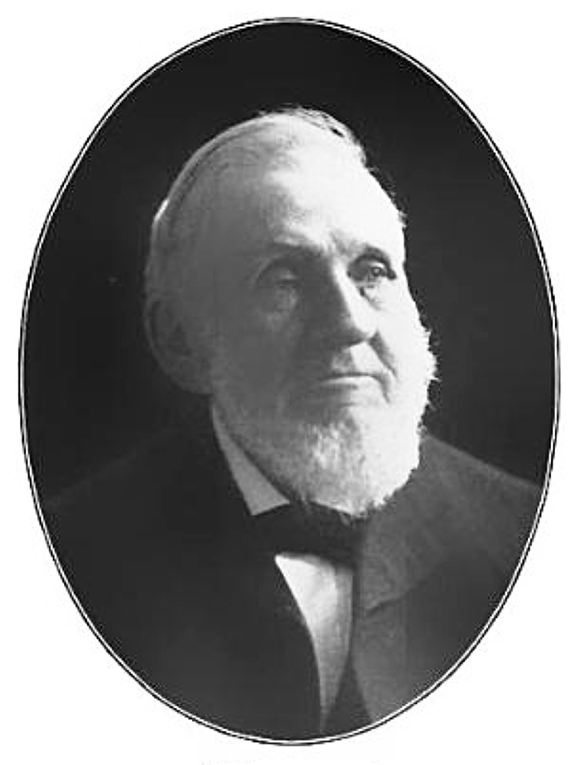 The story here starts with William Burgess (pictured above) who was born on February 13, 1823 in Falls township, Pennsylvania. He was the son of Israel Burgess and Ann Price. William married Elizabeth S. Longshore (1825-1900) in 1846 and they both founded the Greenwood Seminary in Millville, Pennsylvania in 1851 where they had moved. Both William and his wife were teachers before their marriage and continued for a time teaching in various capacities from 1846 to 1866. They had five sons, and two daughters, one deceased, including Franklin P. (1848-), Anna Mary (1849-1853), Alpheus N. (1851-), Marianna (1853-1931), William Watson (1855-), Charles Albert (1857-1945) and Henry Edwin (1859-). Franklin P. and Charles Albert Burgess would later found C. A. Burgess & Company and the Pawnee Indian Medicine Company in San Francisco, California.

During the Civil War, William would enlist with his eldest son Frank in the 203d Pennsylvania Volunteers, Company E and “marched into the wilds of Virginia”. Also during this period, William would get involved with a number of newspapers including the Wyoming Republican in Tunkhannock, Pennsylvania before the war and the Intelligencer in Belevedere, New Jersey.

Government Buildings at the Pawnee Reservation, Genoa, Nebraska. The house in the foreground was the residence of William Burgess and his family from 1873 to 1875 – History of Nebraska

In 1873, William Burgess and his family left the peacefulness of Pennsylvania and moved to the wild west settling in Genoa, Nebraska, in the heart of the Pawnee people. Back east, Burgess had been appointed by the Baltimore Meeting of the Society of Friends as an Indian Agent for the Pawnee Reservation. Burgess and his family were heavily influenced by this relocation and new assignment. He resigned the post in the late summer of 1877 after four event-full years of understanding, hatred and hostility, politics, Indian uprisings, massacres, tribe defections and tribe relocations. [reference: Illustrated History of Nebraska] 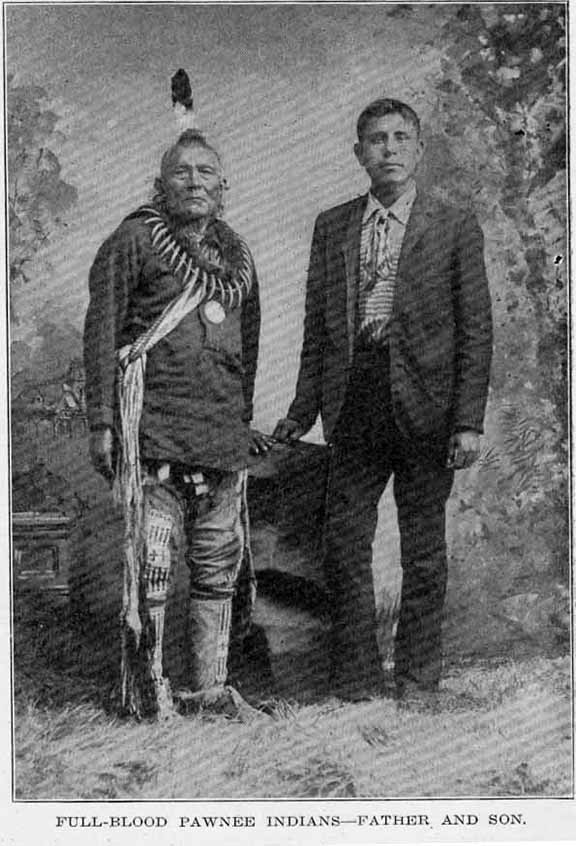 The Pawnee people (also Paneassa, Pari, Pariki) are a Caddoan-speaking Native American tribe. They are federally recognized as the Pawnee Nation of Oklahoma and have four confederated bands: the Chaui, Kitkehakhi, Pitahawirata, and Skidi.

Historically, the Pawnee lived along outlying tributaries of the Missouri River: the Platte, Loup and Republican rivers in present-day Nebraska and in northern Kansas. They lived in permanent earth lodge villages where they farmed. They left the villages on seasonal buffalo hunts, using tipis while traveling.

In the early 19th century, the Pawnee numbered about 10,000 people and were one of the largest and most powerful tribes on the Great Plains. They had escaped some of the depredations of exposure to Eurasian infectious diseases impacting other Indian groups. By 1859, their numbers were reduced to about 1,400; however, by 1874 they had increased to 2,000. Still subject to encroachment by the Lakota and European Americans, finally most accepted relocation to a reservation in Indian Territory. This is where most of the enrolled members of the nation live today. Their autonym is Chahiksichahiks, meaning “men of men”. [Wikipedia]

After Genoa, Burgess moved his family to Columbus, Nebraska in 1880 where he would publish the Columbus Gazette and the Genoa Leader newspaper. He sold the Leader on July 14, 1881. An 1880 census says he was the head of the household (age 57) which included his wife and two of his adult sons, Frank and Charles. The census also mentions three servants and two boarders. William must have been doing OK financially.

Next William shows up in National City, San Diego County in 1882 with his family and he starts a newspaper called The Record. After this, he moves to San Francisco and continues his editorial and newspaper work and is noted with the Pawnee Indian Medicine Company in 1891. It is also possible that William Watson Burgess, his son, was also with the company at this time. In 1892, his sons Charles and Frank Burgess are running a business called C.A. Burgess & Company. William was listed as a capitalist in a number of city directory years in San Francisco during this period. I believe he used his money and his experiences with the Pawnee Indians to found the company and set up his two sons. This company would last until about 1923. The tireless Williams, husband and wife, then go back to Pennsylvania in 1897 and lived there until 1905 when he moved to Chicago to be with his daughter and two other sons. He died in Chicago on November 1, 1905.

The eldest son of William Burgess would follow his fathers footsteps as noted above. On June 9, 1864, Frank Burgess, at the age of 16, enlisted as a private in Company E, in the 203rd Pennsylvania Infantry Regiment and became part of Birney’s Sharpshooters who were issued distinctive green uniforms. He was also in the Second Battle of Fort Fisher at an outlet of the Cape Fear River which resulted in the Union capture of the last Confederate port still open. Out of 9,632 Union troops involved (and 60 ships), there were 1,341 killed and wounded taking the fort. 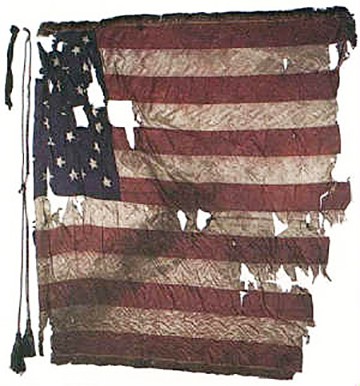 National colors of the regiment after the Battle of Fort Fisher on January 15, 1865. The 203rd Pennsylvania suffered the highest Union casualties in the battle which the largest amphibious operation of the US Army before World War II. With 46 killed and 145 wounded, the 203rd suffered nearly 50% casualties. Company E, with a muster roll of 131, lost 8 dead and 15 wounded. – Richard Cramer

In May, 1875, Frank P. Burgess started the Columbus (Nebraska) Republican, an eight-column folio, which obtained a good local circulation, and said paper was continued successfully for over a year, when in 1877, he sold the office to Calmer McCune, who removed it to David City, and started the David City Republican. In 1892, he is listed as one of the partners of C.A. Burgess & Company and The Pawnee Indian Medicine Company.

Charles A. Burgess of C. A. Burgess & Company in San Francisco was born on May 12, 1857 in Millville (Columbia Co., Pennsylvania). He too followed his fathers footsteps. Charles, also known as Nebraska Charlie, Wild Charlie and Dr. C. A. Burgess, was a child on the Pawnee reservation. There was a book written called “The Adventurous Life of ‘Nebraska Charlie’ – Charles E. Burgess – The Boy Medicine Man of the Pawnees” by Col. Prentiss Ingraham (New York: 1882). He was later a stage actor, presumably in Buffalo Bill’s Wild West Show 1n 1880 at the age of 23. In 1890, at the age of 33, in San Francisco, Charles would buy the business of Giesue Rottanzi, who produced Pawnee Long Life Bitters, Pawnee Bitters, Pawnee Indian Too-Re, Pawnee Indian Relief (pictured at left from eBay) and other patent medicines. Their marketing slogan was Too-Re-or not Too-Re! He died on May 30, 1945 in Cook County, Illinois. 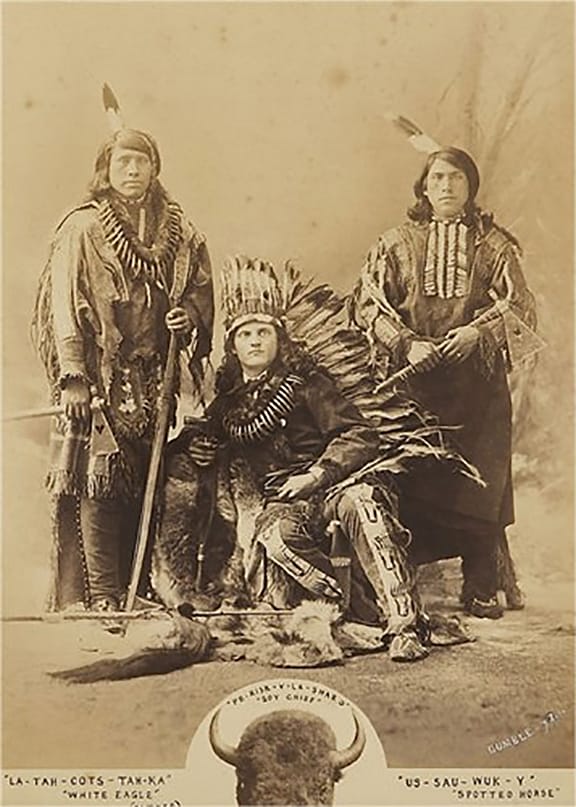 The figure in the center may be Henry Edwin Burgess (known as the Boy Chief). The names for the Boy Chief match those used by Eddie Burgess in handbills from the Buffalo Bill Wild West Show – Richard Cramer

Mr. Henry Edwin Burgess, of San Francisco, visited his sister at our school on Sunday. Mr. Burgess has had considerable experience among the Indians of the plains, his father having been agent for the Pawnees during the boyhood days of the first named. Mr. Burgess speaks the Pawnee language with the fluency of a native, and can carry on an intelligent conversation for hours with any of the tribes of the south west, in the interesting sign language. In 1875 he was inter-tribal interpreter for the Cheyennes, Arapahoes, Comanches, Kiowas and Pawnees, being employed by the Government to assist in adjusting the deal which the latter made for the Pawnees with the tribes of the southwest, at the time the Pawnees bought their present reservation. He was struck with the gentlemanly bearing and demonstrativeness of our boys and girls in contrast with the taciturn Indian youth he used to see hanging around the schools on reservations, in days gone by. [The Indian Helper – Carlisle Pennsylvania, Miss Marianna Burgess, Manager]

1870: William Burgess, Genoa, Nebraska, appointed by the Baltimore Meeting of the Society of Friends as an Indian Agent for the Pawnee Reservation.

1890: Charles Albert Burgess, at the age of 33, in San Francisco, buys the business of Giesue Rottanzi, who produced Pawnee Long Life Bitters and other patent medicines. 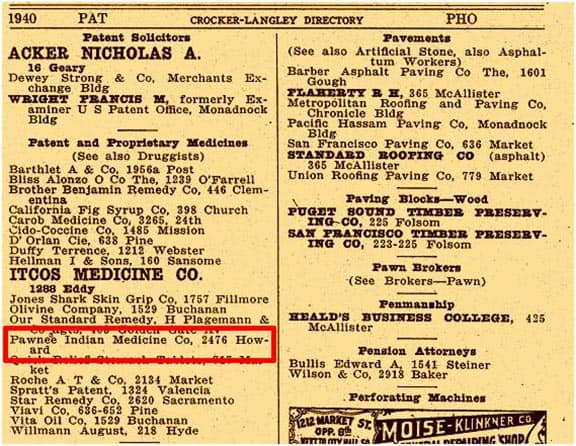 Pawnee Indian Medicine Company relocated to the 2476 address in 1907, shortly post ’06 Earthquake and fire. They do not show in the post quake emergency and or temporary relocated business directories, but pop up in 1907. This is a clip from the ’07 directory. – Bruce Silva

Ferdinand Meyer V is a native of Baltimore, Maryland and has a BFA in Fine Art and Graphic Design from the Kansas City Art Institute and School of Design. Ferdinand is the founding Principal of FMG Design, a nationally recognized design consultation firm. Ferdinand is a passionate collector of American historical glass specializing in bitters bottles, color runs and related classic figural bottles. He is married to Elizabeth Jane Meyer and lives in Houston, Texas with their daughter and three wonderful grandchildren. The Meyers are also very involved in Quarter Horses, antiques and early United States postage stamps. Ferdinand is the past 6-year President of the Federation of Historical Bottle Collectors and is one of the founding members of the FOHBC Virtual Museum.
View all posts by Ferdinand Meyer V →
This entry was posted in Advertising, Bitters, Civil War, Collectors & Collections, History, Medicines & Cures and tagged Burgess, Charles, Frank, Indian, Medicine, Meyer, Pawnee, Pennsylvania, San Francisco, teaching, Too-Re, William. Bookmark the permalink.