I received an e-mail (see below) while I was at the Lexington National Antique Bottle Show from a fellow in Illinois regarding the Mountain Root Bitters put out by Abel Humiston in Sandwich, Illinois. At first I was thinking there was a person named Abel Humiston, but we are really talking about Jonathan Abel and Lanson S. Humiston who produced this bitters for a short period in 1867.

[e-mail 1] Just saw you on the Extreme Collection TV show. I’m looking for a bitters bottle from my home town of Sandwich, Illinois. It says Mountain Root Bitters on one side and Abel Humiston Sandwich Ill on the other. There is a picture of a broken one in the Bottled in Illinois hardback book. I know of a few but they are not available here locally. I’m also interested in Sandwich soda bottles or any bottle at all from Sandwich. Milks and even meds. Just wondering if you may have any or know of anyone that might that I could contact.

[e-mail 2] Sorry, don’t have any other pictures right now. Can’t find any info on the bottle except that the guy was in the sandwich area from the mid 1860s to the early 1900s if my memory is correct. I looked up old obituaries locally and found his name. Couldn’t find anything else about him. I purchased from a guy I know that said his grandfather had it many years ago. His grandfather was around in early 1900s. Have you ever seen any bottles from sandwich, Illinois?? Thanks 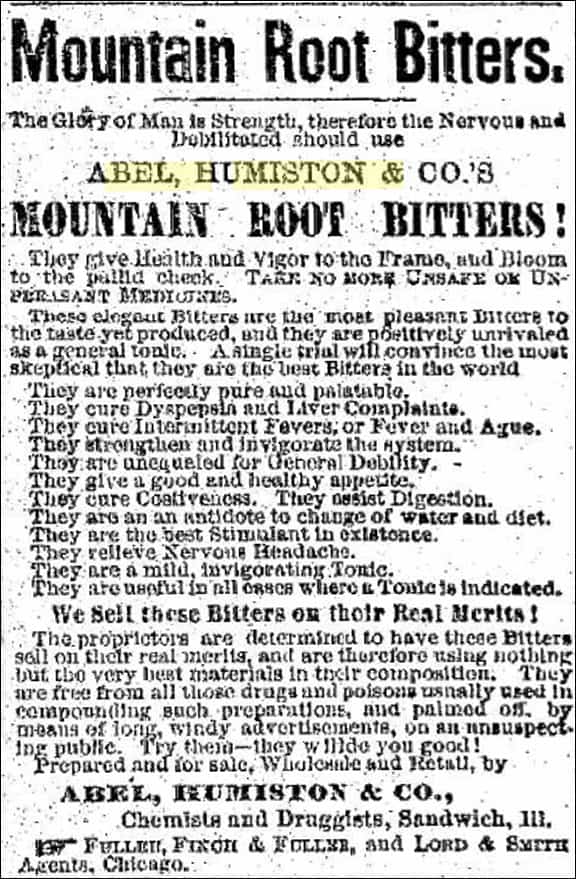 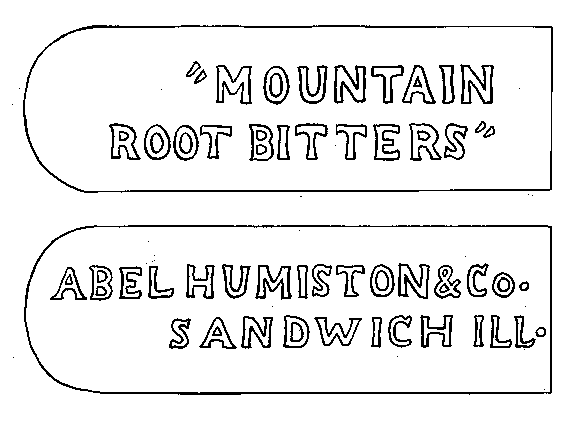 Jonathan Abel was born in Poughkeepsie, Dutchess county, New York on the 4th of December 1832 and was the son of John and Miranda (Sampson) Abel, of German and English extraction. He received a good English education at an excellent Quaker school in Oswego, New York. Jonathan assisted his father at the home farmstead until 24-years old when he set out with his friend, Lanson Humiston to start a new career. Looking out west, he settled in 1857 in Sandwich, DeKalb county, Illinois where he resided about ten years. Abel worked in the lumber dealing, livestock and drug business as Abel, Humiston & Company, chemists and druggists. The last of these years was when he and Humiston put out the Mountain Root Bitters in 1867. They were selling the product in Sandwich, Chicago and parts of Wisconsin. Abel was also identified with banking operations in Sandwich and held the office of postmaster for a number of years, serving under the administrations of President’s Lincoln and Johnson. He was a also Master Mason in the Meteor Lodge in Sandwich.

Abel moved to Chicago in February 1868 and first partnered at Plows, Abel & Humiston (William J. Plows had his name embossed on Plows Sherry Bitters) who were liquor dealers and within the following year purchased an interest in the extensive distilling business of Dickinson, Leach & Company, succeeding Colonel Wheeler, who had died. The company met with immense financial losses in the great Chicago fire on October 8th and 9th, 1871 due to the collapse and failure of the insurance companies through their heavy losses. It is interesting to note that there were upwards of fifty retail druggists and five wholesale druggists whose stores and stocks were utterly consumed during the great Chicago fire. 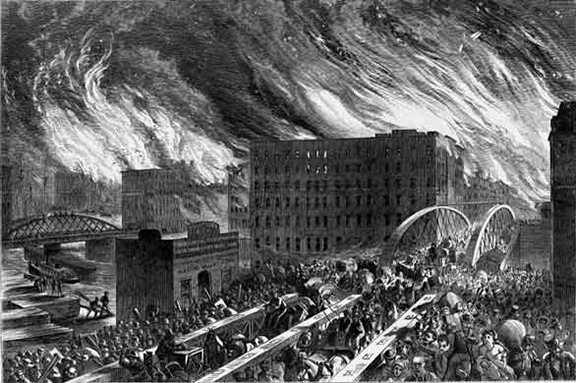 Artist’s rendering of the fire, by John R. Chapin, originally printed in Harper’s Weekly; the view faces northeast across the Randolph Street Bridge.

In 1874, Mr. Leach sold his interest in the business to Mr. Ames and the firm became Dickinson, Abel & Company, and so remained until the two years prior to the death of Mr. Dickinson, in 1878, when it incorporated as The Phoenix Distilling Company with Mr. Abel as president.

Abel would reorganize in 1887 as Distilling and Cattle Feeding Company and Abel, Ames & Company in the general distribution business in connection to distilled liquors, their operations annually reaching a million dollars. Later he would be a stockholder in the Metropolitan National and Union National Banks of Chicago. [references: Compendium of Freemasonry in Illinois and A Biographical history, with portraits, of prominent men of the great West]

Lanson S. Humiston was born on 22 September 1827 in Dutchess County, New York and was the son of Samuel Dunbar Humiston (wife Catherine Kilmer) who was born on the 4th of March 1805 in Hillsdale, Columbia, New York. Their child was Lanson S. Humiston, who married Mary E. Litsey in 1848. The family came to Kendall County, Illinois from New York in 1838. They had four children, Samuel A., Ella, Marietta and George Abel Humiston (note middle name, named after his lifelong friend). Lanson, who was probably childhood friends with Abel, would eventually make the Mountain Root Bitters in 1867. Humiston would follow Abel to Chicago where they were in the liquor and distilling business together. Humiston died on  8 January 1869 in Colorado Springs, Colorado.

The town is inexorably tied to politician “Long John” Wentworth and his efforts to move the State of Illinois border with Wisconsin from being even with the bottom of Lake Michigan to the current line of where it is now. If the border were not changed, the State Line would actually reside along the LaSalle-DeKalb County border, splitting parts of Sandwich from the main areas of the incorporated community. The community was established when Almon Gage sought a railroad stop on the Chicago, Burlington and Quincy Railroad that ran through town. Originally naming it Newark Station, (not to be confused with the nearby village of Newark), he and Wentworth worked extensively to create the community and also to get the railroad stop created. In honor of his efforts, Wentworth had been given the opportunity to name the town, and he named it after his home of Sandwich, New Hampshire. The town’s Wentworth apartments and Wentworth Street are also named after Mr. Wentworth. [Wikipedia]

1838: Samuel Dunbar Humiston and his wife Catherine (Kilmer) Humiston came to Kendall County, Illinois from New York in 1838. Their child was Lanson S. Humiston, who married Mary E. Litsey in 1848. They had Samuel A., Ella, Marietta and  George Abel Humiston.

Ferdinand Meyer V is a native of Baltimore, Maryland and has a BFA in Fine Art and Graphic Design from the Kansas City Art Institute and School of Design. Ferdinand is the founding Principal of FMG Design, a nationally recognized design consultation firm. Ferdinand is a passionate collector of American historical glass specializing in bitters bottles, color runs and related classic figural bottles. He is married to Elizabeth Jane Meyer and lives in Houston, Texas with their daughter and three wonderful grandchildren. The Meyers are also very involved in Quarter Horses, antiques and early United States postage stamps. Ferdinand is the past 6-year President of the Federation of Historical Bottle Collectors and is one of the founding members of the FOHBC Virtual Museum.
View all posts by Ferdinand Meyer V →
This entry was posted in Bitters, Druggist & Drugstore, History, Liquor Merchant and tagged Abel, bitters, Humiston, illinois, Jonathan, Lanson, Mountain, Root, Sandwich. Bookmark the permalink.