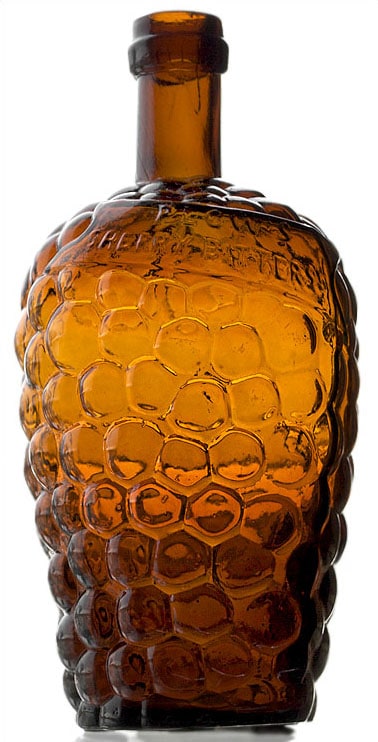 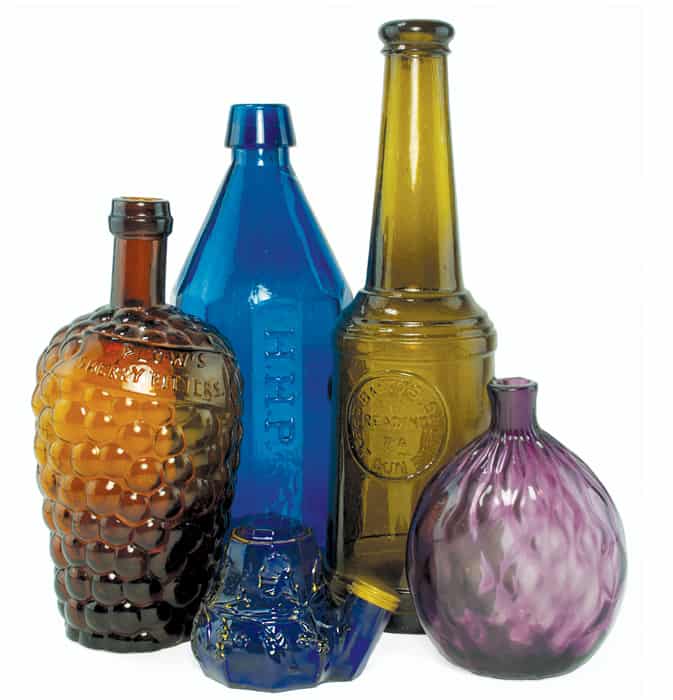 Glass Works Auctions has a wonderful example of a figural Plows Sherry Bitters in their upcoming ‘Colors of Spring’ Catalog Auction #130. The bottle is pictured at the top of the post, in the grouping above and below. The Plows, in the form of a cluster of grapes, is drop-dead gorgeous. Even the label panel on the reverse is shaped like a grape leaf. The auction opens for bid on April 22nd and closes on April 29th, 2019.

I have not seen this particular example before as it has been nested away for many years with Sidney Genius, a name I’ve heard of, but a person I have not met. Apparently he has or had some great bitters which are now being auctioned by Glass Works over a period of time 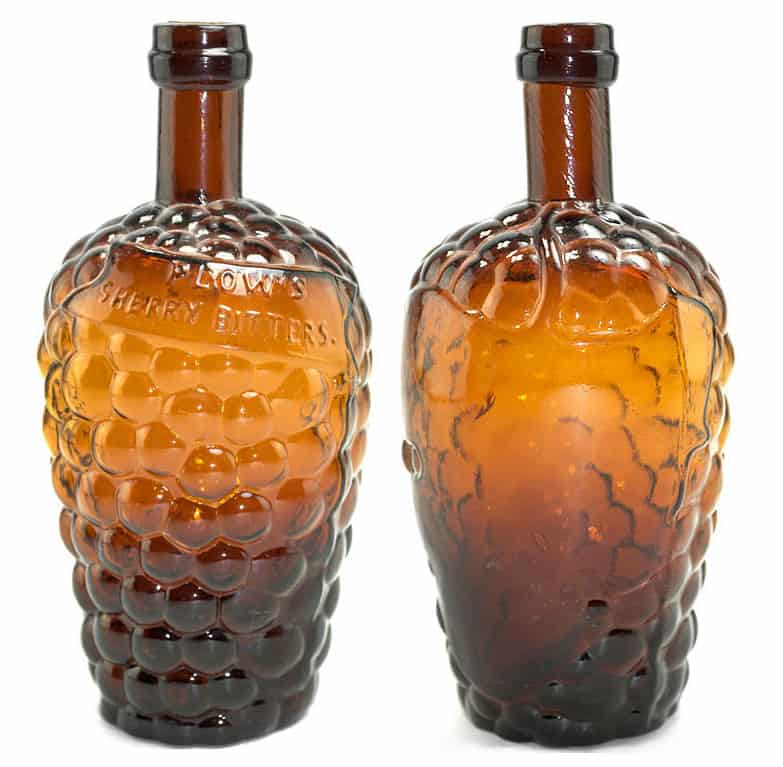 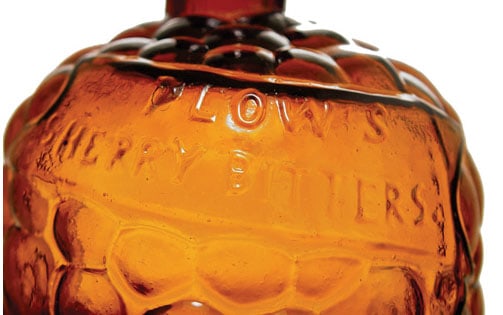 Notice that the listing above and the embossing on the bottle has no proprietor or manufacturer name, nor a city where it was produced. The copy simply says ‘Plow’s Sherry Bitters.’ There is no Plows advertising, no surviving label, no trade cards, nothing.

Like other collectors, I wondered about this bottle for many years until I heard that the 1st Chicago Bottle Club posted an image of the following advertisement on their website. It turns out that bitters authority Ted Krist originally found the ad in January 2016 while researching the Plows. Ted shared the find with the club and recently included the Plows advertising find and information in his seminar at the FOHBC 2018 Cleveland National Convention where he likened his find to “even a blind squirrel finds an acorn every once in a while.” This little ad has it all and solved the case after so many years of not knowing. 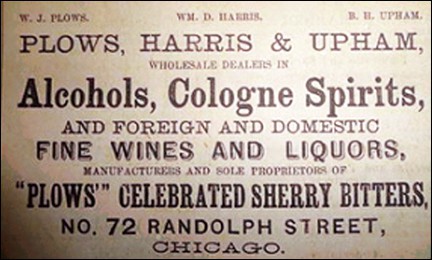 Oh, here is my example pictured below. I love the amber coloration which changes throughout the bottle. The Plows bottles only come in amber, so no color runs here. This example came from the American Bottle Auctions, Grapentine I Auction in April 2007. It was previously auctioned by Glass Works Auctions in Auction #48 and noted as ex: Frank Barranco. It has a drippy top, loads of whittle and is a top specimen. 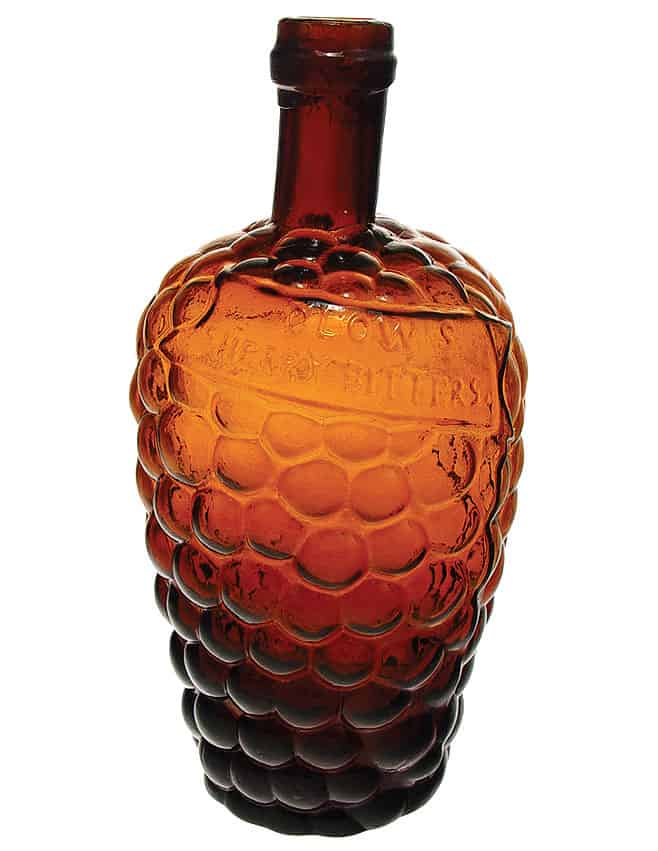 There is not a terrible amount of information out there about W. J. Plows. We know that he was born in New York around 1831. In 1855, he was living in New York with his wife Olivia and one child according to the New York State Census. Five years later, an 1860 United States Federal Census lists him working in a saloon in Milwaukee. William J. and his wife are listed with three children, Olivia age 6, Edward age 4 and Gertrude age 2.

W. J. Plows leaves Milwaukee and is next found in Chicago in 1866 where he is a partner at Smith & Plows. William J. and Charles R. Smith are selling wholesale wines and liquors at 103 S. Water Street. This partnership ended on March 27, 1867 according to the Chicago Tribune. Plows left while leaving the newly named C. R. Smith & Co. to continue with the liquor business. He might have been bought out leaving him some money to finance his Plows Sherry Bitters endeavors.

Plows must have, in quick order, gone into business with William D. Harris and B. H. Upham as Plows, Harris & Upham is listed in 1867 as liquor dealers located on 72 Randolph street according to the John C. W. Bailey’s Business Directory of Chicago. This is pretty much the same information on the ad posted by the 1st Chicago Bottle Club except their ad also notes that Plows, Harris & Upham were Wholesale Dealers in Alcohols, Cologne Spirits and Foreign and Domestic Liquors and that they were the Manufacturers and Sole Proprietors of “Plows” Celebrated Sherry Bitters. The bottle was probably ordered only once in a group and sold wholesale and retail in 1867.

This partnership would end as Plows is next listed as a partner with Plows, Abel & Humiston (William J. Plows, John Abel and Len S. Humiston) who were liquor dealers located at 154 Dearborn. They were listed in 1867 and 1868. There is some overlap here as Plows must have had a few irons in the stove. A newspaper Dissolution notice for Plows, Abel & Humiston occurred as of April 20, 1869. The notice said that W. J. Plows would continue the wholesale liquor business at 154 Dearborn.

Bitters collectors might be familar with the names John Abel and Len S. Humiston as they put out Mountain Root Bitters.

In 1869, W. J. Plows put out notices that he was wanting to sell his old wholesale liquor business cheap so he could go into distilling and rectifying. The 1870 Federal Census lists him as a distiller and all other available listings after this date note that Plows was in the distilling business. His son Edward would join him as a clerk and accountant. In 1875, Plows buys, at a government auction, the distillery of the Union Copper Distilling Company.

In 1878, William J. Plows is listed as the Proprietor of Vienna Coffee located at 65 Dearborn with a residence in Zurich. I guess that these were his golden pasture years. Plows would die in the early 1880s leaving his wife a widow and antique bottle collectors with a great bottle. 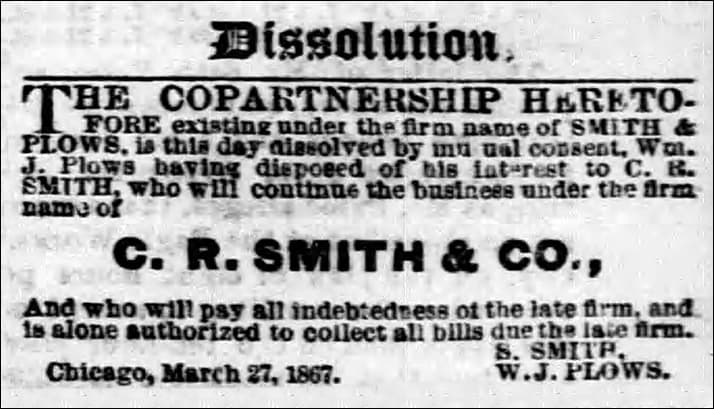 1869: W.J. Plows wanting to sell his old wholesale liquor business cheap so he can go into distilling (below). – Chicago Tribune, Sunday, December 5, 1869 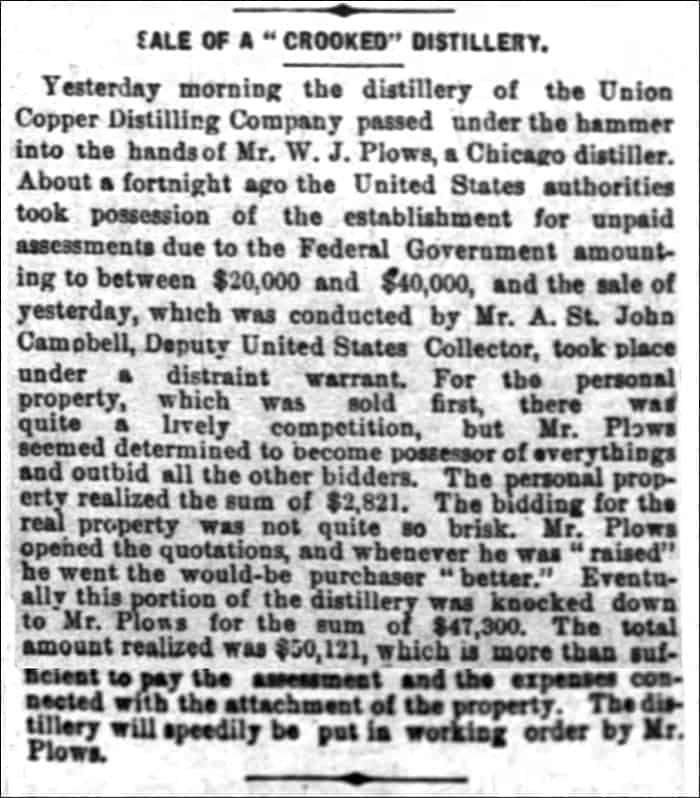