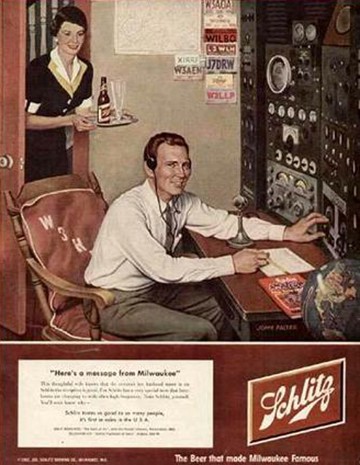 I like this retro Schlitz Beer advertisement of an amateur radio operator. My father used to be a Ham radio operator. I remember his odd equipment with all these illuminated dials and a funny microphone in the basement and how excited he was after making contact with someone in some far off place. This usually happened in the deep hours of the night. 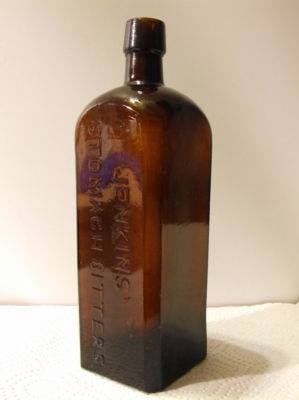 I guess I do the same thing with the internet and all of the things that I monitor and am connected to. Yesterday, I was watching some Facebook bottle collecting cross-traffic chatter between Brian Shultis and Adam Doughty regarding a Jenkin’s Stomach Bitters from Nashville, Tennessee. It seems like Brian, a Tennessee bitters collector, was thanking Adam for a paper receipt (see below) from R. P. Jenkin’s, the proprietor of the bitters. Brian comments that he does not have an example and would very much like one. 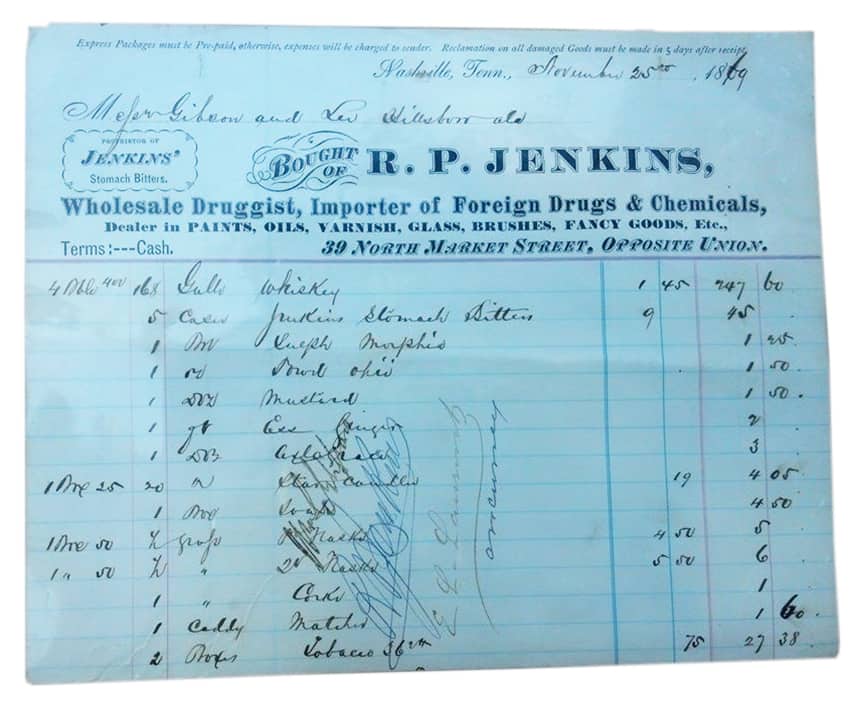 Jenkins’ Stomach Bitters was patented on February 2, 1869 in Nashville, Tennessee. A newspaper clipping and Patent 86,551 are both below confirming this date. If I am not mistaken, the receipt above is from November 25, 1869. The Carlyn Ring and W.C. Ham listing in Bitters Bottles is as follows: 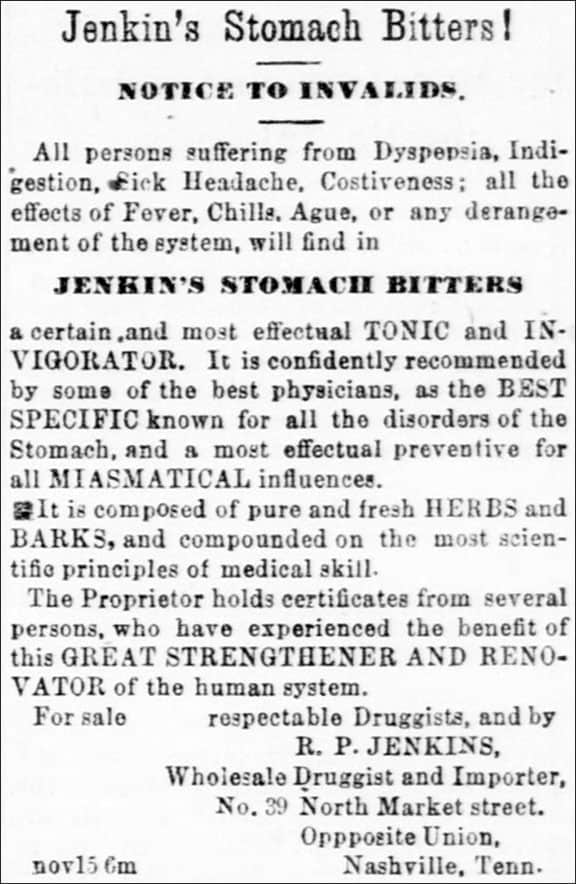 R. P. Jenkins was located at 39 North Market Street in Nashville, Tennessee and operated between 1866 and 1873, at least by looking at advertisements and directory listings during this period. Apparently the business originated with Tom Wells in 1804. Jenkins was announcing he was the successor to Wells in 1867.

Jenkins would die young at 35 years old on August 7, 1874 of liver disease. While his bitters advertisements said it was a “certain, and most effectual Tonic and Invigorator” and a “Great Strengthener and Renovator of the human system”, I suppose his bitters did not work, at least for him.

The branch of business in our city coming under the above caption, is one that has come into notice within the last few years, and has grown to such formidable proportions that we give it prominence in a separate and special chapter. Our manufacturers and dealers in this line have admirably succeeded in introducing their health-giving preparations into all portions of the South; and persons who formerly purchased none but liquids, whose constituents, to say the least, were dubious, are using almost exclusively those manufactured in Nashville. Numerous advertising devices have been resorted to by them to bring their “Bitters” to the attention of the public, some of which are so novel and attractive as to challenge notice, be the observer never so dull and short-sighted. In truth, our “Bitter” men may be called the ” Helmbolds of Nashville.” As we take it, this evidence of enterprise in advertising is pretty good evidence of the same admirable characteristic in the mode of conducting their business, and in this we fully believe Nashville Manufacturers are eclipsed by but few if any. 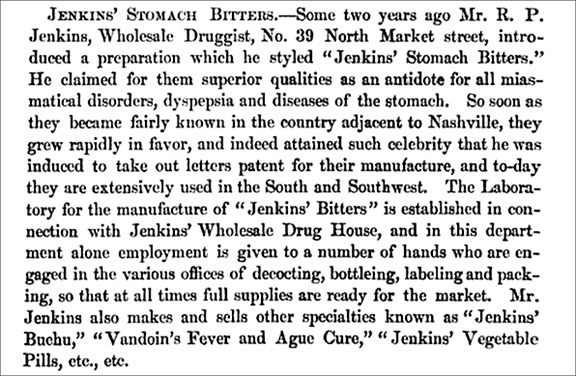 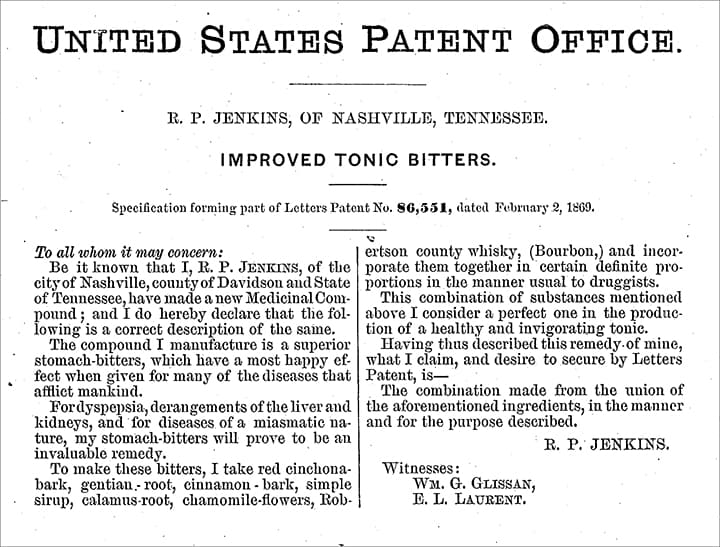 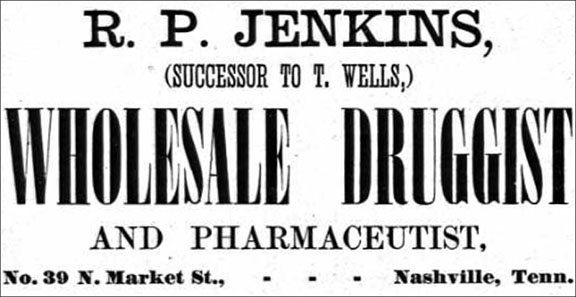 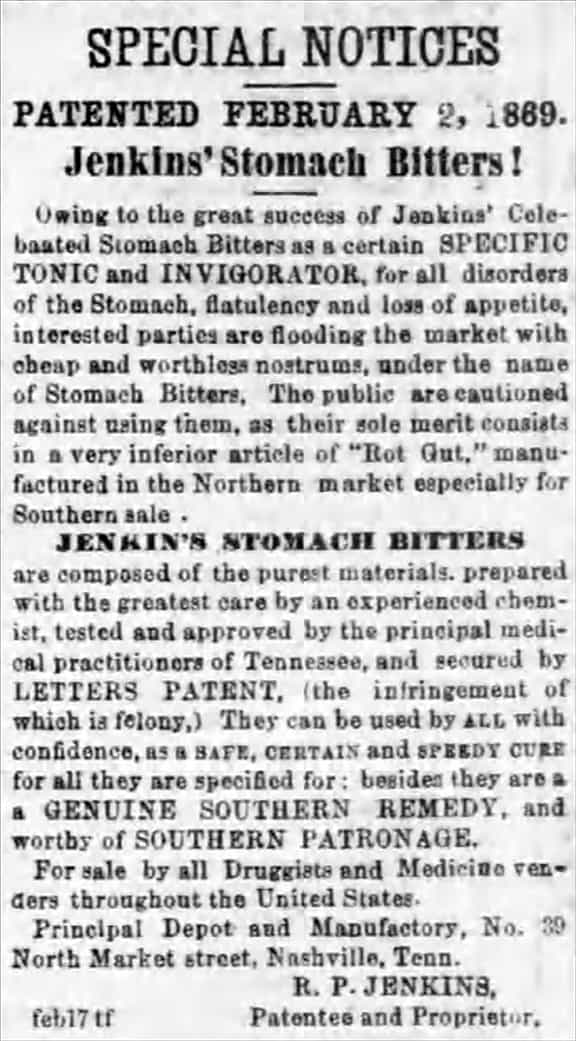 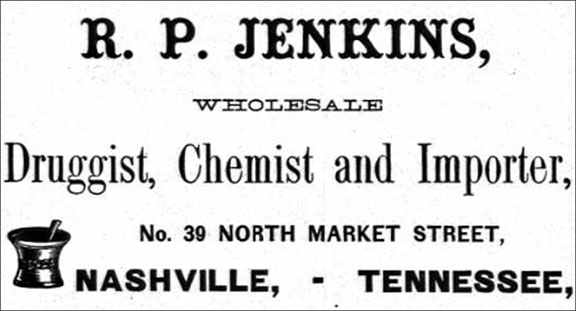 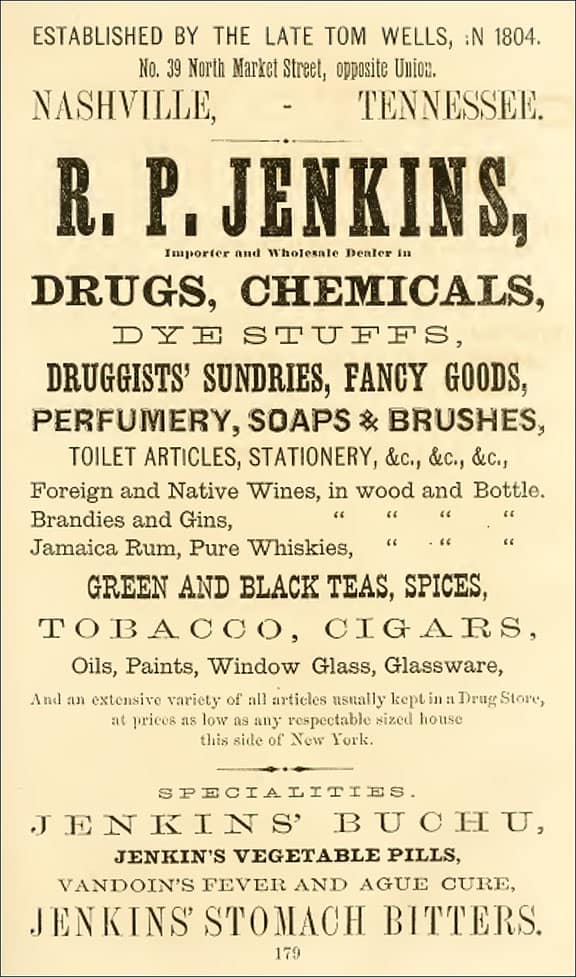 1870 R. P. Jenkin’s advertisement – Nashville and Her Trade for 1870 by Charles Edwin Robert

Ferdinand Meyer V is a native of Baltimore, Maryland and has a BFA in Fine Art and Graphic Design from the Kansas City Art Institute and School of Design. Ferdinand is the founding Principal of FMG Design, a nationally recognized design consultation firm. Ferdinand is a passionate collector of American historical glass specializing in bitters bottles, color runs and related classic figural bottles. He is married to Elizabeth Jane Meyer and lives in Houston, Texas with their daughter and three wonderful grandchildren. The Meyers are also very involved in Quarter Horses, antiques and early United States postage stamps. Ferdinand is the past 6-year President of the Federation of Historical Bottle Collectors and is one of the founding members of the FOHBC Virtual Museum.
View all posts by Ferdinand Meyer V →
This entry was posted in Advertising, Bitters, Druggist & Drugstore, History, Medicines & Cures and tagged Adam Doughty, bitters, Brian Shultis, Druggist & Drugstore, Ham, Jenkins, Nashville, operator, radio, Schlitz, Stomach, Tennessee. Bookmark the permalink.