Reading the most recent Electric Bitters post on PRG got me thinking about this “zapping” thing. With the hundreds of 19th-century patent medicine concoctions that were ineffective and perhaps injurious, why might H.E. Bucklen’s Electric Bitters be any different? And what’s this about an “Electrified Ginger Ale”? Let’s look at Bucklen’s label first (see below). Apparatus and contraptions involving electrical current were being invented by the bushel in the late 19th century and Bucklen’s example looked as much a fantasy as all the rest. Before we call Electric Bitters just another scam, we need to find out about a gas called ozone. Yes, ozone; the same atmospheric layer we have been poking holes in for decades. But our story begins many decades even before Bucklen. 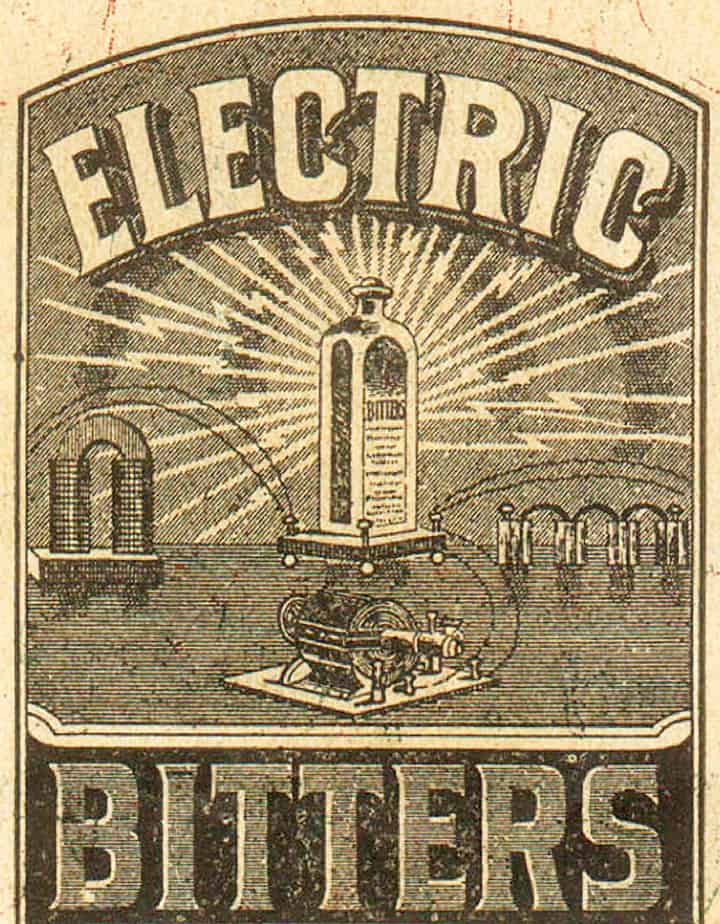 At one time or another, we have all experienced the distinctive scent of ozone when we’ve been too close to a bolt of lightening, had a wall plug short out, or jump-started a car. That quick sensory “zap” is ozone, expressed chemically as 03; that’s oxygen with 3 atoms. As early as 1785 Dutch chemist van Marum noted this smell in the presence of electrical discharge in the air. However, Christian Friedrich Schönbein, a German physicist, is known as the discoverer of ozone. In 1840, he deduced that the odor that Van Marum had described many years earlier was a gas. Schonbein called it “ozone”, a name which he may have derived from the Greek word “osme” for odor. In 1857, Von Siemens, built the first ozone generator which was called an “Induction Pipe”. The ozone was created by passing electrical current through oxygen (see below). 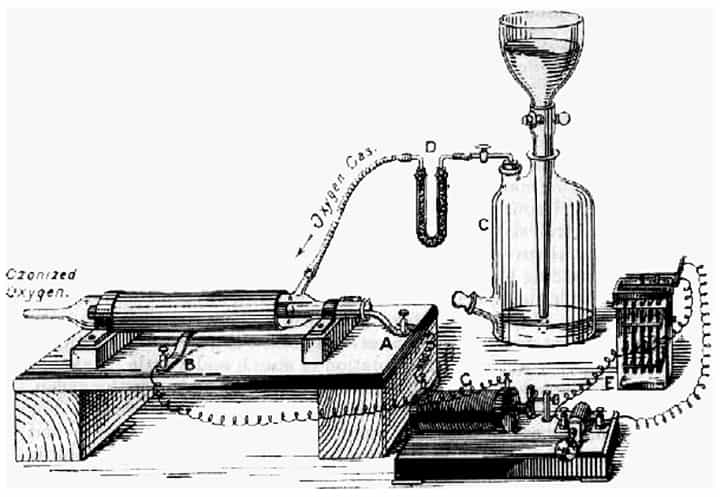 What’s this got to do with Electric Bitters? In the 1870s, European scientists claimed that ozone gas could disinfect water. Not long after that claim, tests in Germany confirmed that ozone did kill bacteria, and very effectively. Ozone water treatment research and development took off, especially with lingering memories of European epidemics caused by waterborne bacteria. Both the Netherlands (1893) and France (1906) built ozone treatment facilities for municipal water sources. Master inventor Nikolas Tesla patented his own version of an ozone generator (1900) which gained him a Nobel prize (see below). 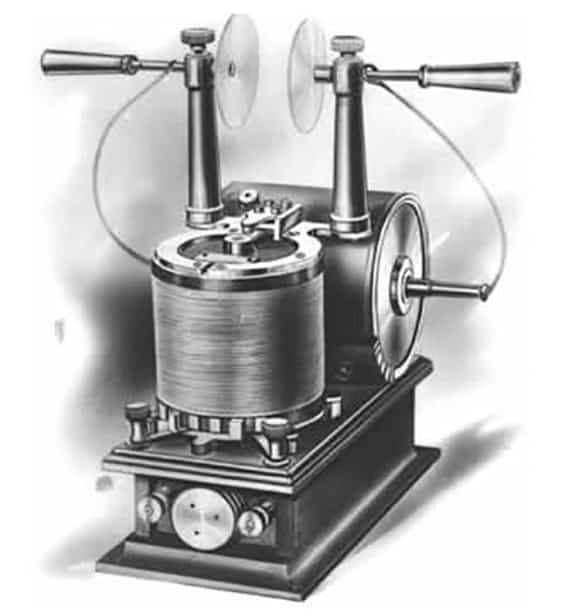 Tesla Machine: “Tesla got a prize for his generator, but others were already ahead of him in Europe.”

Electric Bitters was introduced right in the middle of this new water purification method. If Bucklen did indeed treat his water source with electrically-generated ozone gas, or even ran his whole bitters recipe through it during the bottling process, then his fanciful label illustration was not completely quackery. (The drawing is an advertising gimmick as it is not at all the way it really worked.) Regardless, the label depiction of the “electric” treatment surely contributed to the popularity of his bitters not only because of the current novelty, but also if ozone was truly applied it probably did reduce the amount of bacteria ingested by his many thousands of customers.

Now, the ginger ale connection to all of this: In 1922, the Electrified Water & Machine Company of Dallas, Texas (see listing above) was producing ginger ale with “Electrified” embossed on their bottles (see pictures below). Very little is known about this company and after 1926 there is no record of the business. We can only guess that they used ozone to purify their products, but since by 1915 there were nearly 50 ozone water treatment plants operating in Europe, it is a safe bet that they did. 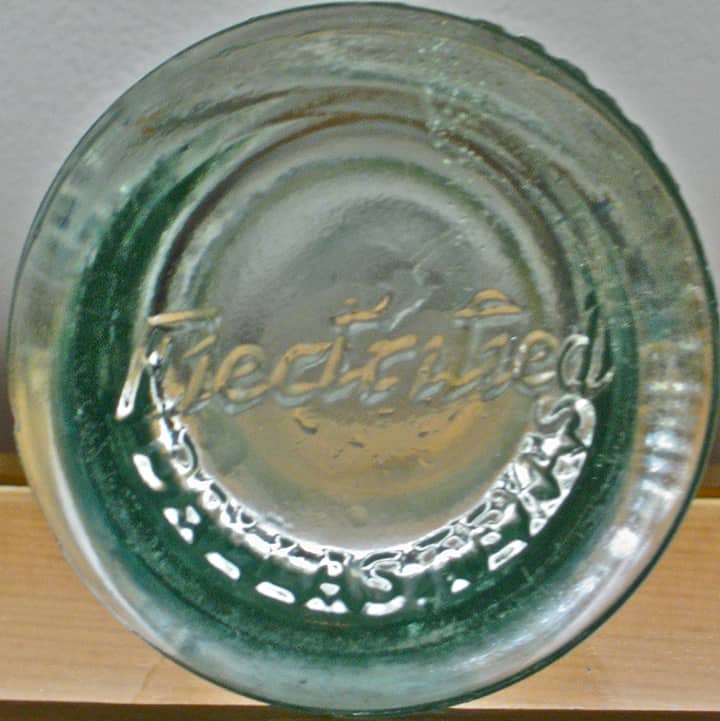 Electrified bottle bottom: “Base with logo and Dallas, Texas.”

A Pittsfield, MA bottling company left no doubt about their use of ozone treatment for their ginger ale. It was “electrified”. Starting out as the Pittsfield Mineral Water Company, the firm merged with the Pittsfield Coca-Cola Bottling Company in 1920 and continued to produce Mohawk brand beverages (see below). The leaflet pictured beneath the advertisement below is probably from the mid-1930s. The ozone treatment equipment on the left looks very similar to modern installations. 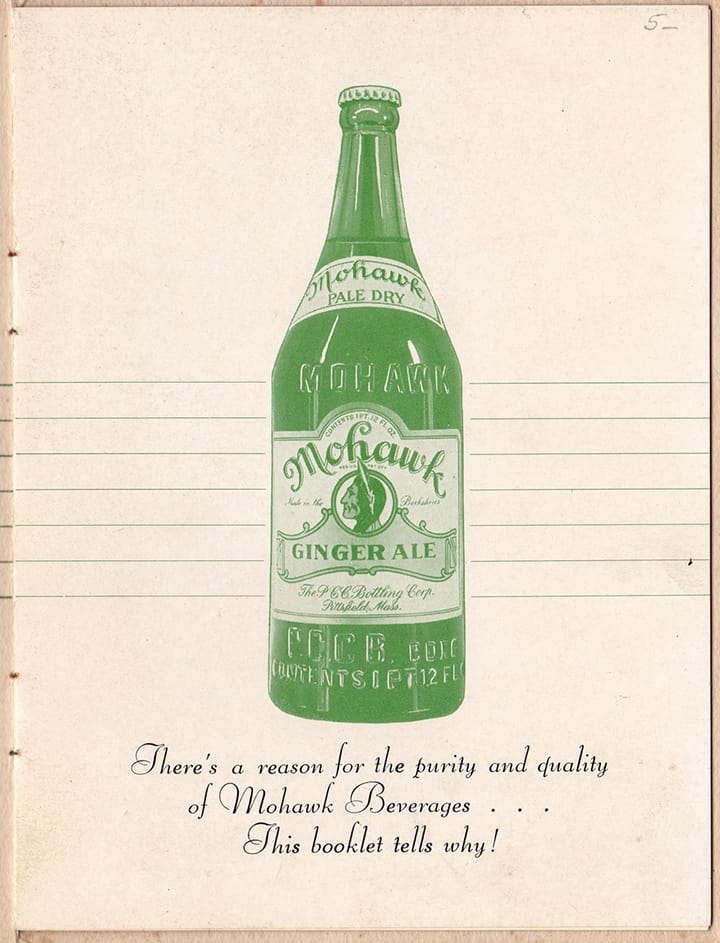 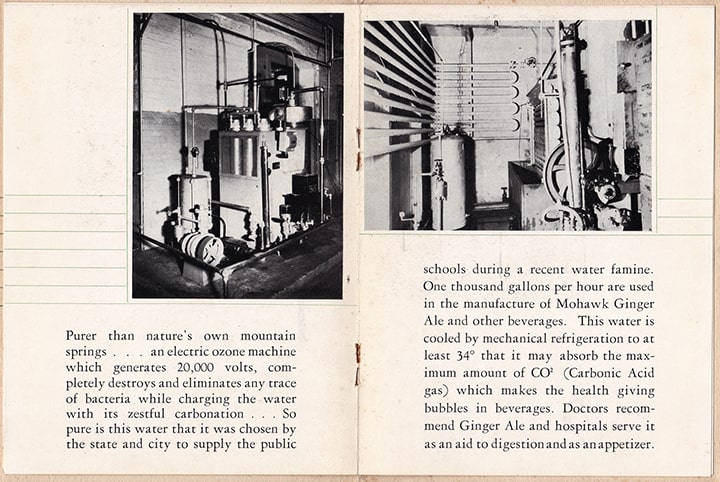 The U.S. lagged behind the rest of the world in adopting ozone water treatment. Even though Whiting, Indiana was using the process in 1940, it was only in 1982 that the “generally recognized as safe” GRAS approval was given for purifying bottled water. (Dallas, Texas, home of Electrified Ginger Ale, only joined the ozone club in 1993.)

The ubiquitous bottle of water everyone seems to be attached to these days was most likely zapped with ozone. But none of them has a dramatic machine on the label or a name like Electric or Electrified to intrigue us.

Ferdinand Meyer V is a native of Baltimore, Maryland and has a BFA in Fine Art and Graphic Design from the Kansas City Art Institute and School of Design. Ferdinand is the founding Principal of FMG Design, a nationally recognized design consultation firm. Ferdinand is a passionate collector of American historical glass specializing in bitters bottles, color runs and related classic figural bottles. He is married to Elizabeth Jane Meyer and lives in Houston, Texas with their daughter and three wonderful grandchildren. The Meyers are also very involved in Quarter Horses, antiques and early United States postage stamps. Ferdinand is the past 6-year President of the Federation of Historical Bottle Collectors and is one of the founding members of the FOHBC Virtual Museum.
View all posts by Ferdinand Meyer V →
This entry was posted in Advertising, Article Publications, Bitters, Ginger Ale, History, Medicines & Cures, Mineral Water, Soda Bottles, Soft Drinks, Technology and tagged Ale, bitters, current, Electric, electrified, Ginger, lightening, Mohawk, Nikolas Tesla, ozone, Pittsfield, Quackery, Von Siemens, zapped. Bookmark the permalink.