The Wiggs Brothers and their Fabulous Figural Cabin Bottle 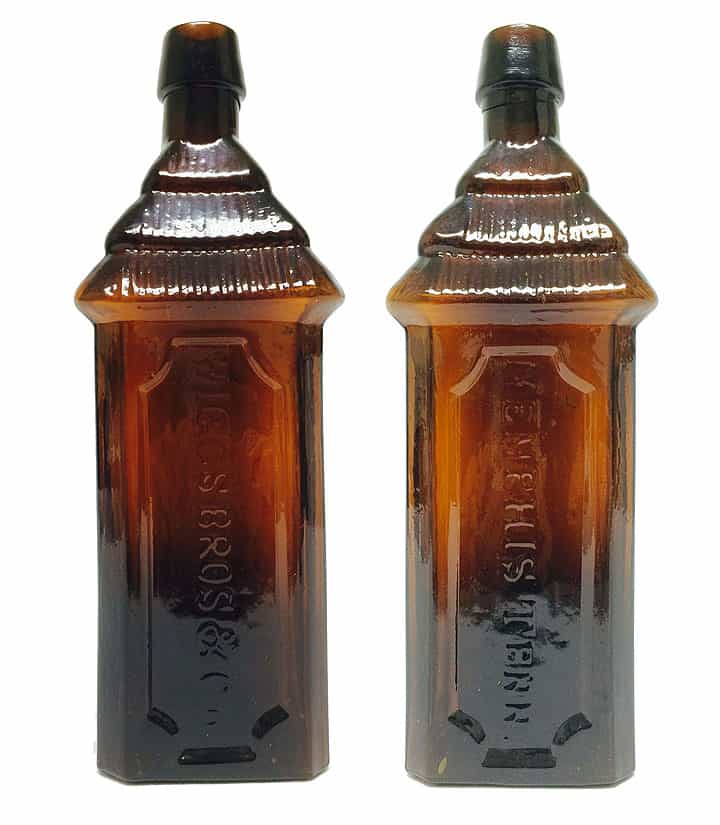 The Wiggs Brothers and their fabulous figural cabin bottle

As you might imagine, I have quite a few bitters in my collection, many being quite rare. It has gotten to the point that when I see a picture of a bitters or a possible bitters that I don’t have or may never have, I get quite excited. Of course there is the desire to possess it, but there is also satisfaction in having the picture and being able to find out about the bottle. This is the case with the the Wiggs Brothers and their fabulous figural cabin from Memphis, Tennessee (pictured above). Is it a bitters bottle? Is is not listed in Ring & Ham.

I think I remember seeing this bottle at the FOHBC 2004 Memphis Expo in a display of rare bottles. My pictures weren’t that great so I was happy to see some incoming pictures of rare southern bottles for use in developing marketing material for the 2015 Southern Region | National Antique Bottle Show in Chattanooga, Tennessee. Two were of the Wiggs Brothers figural cabin (front and back embossing) from the Tom Phillips collection.

The Drug Store on Main Street

The address of the brothers drug store was 317 and 319 Main Street. They advertised quite a few medicinal and other personal care products during their few short years together in business. A short paragraph on 14 August 1860 would be prophetic as to the future of Wiggs Brothers & Company.

Wiggs Bro’s. & Co., druggists, corner of Main and Union, had numerous small stars, representing the seceding States with the names of which they were labeled; that for South Carolina had a Palmetto flag with the surrounding motto: “Southern Independence.” Many smaller stars and a general lighting up from bottom to roof, made this display noticeable.

The Brothers Separate | William B. Wiggs

On 08 November 1861, the Wiggs Brothers partnership was broken between William B. Wiggs, John Joseph Wiggs and W. H. Pickett. James A. Wiggs is not mentioned which makes me wonder if he was a true partner. You have to remember, these guys were pretty young at this time and hostilities between the North and South had happened a few months prior on 12 April 1861, when Confederate forces fired upon Fort Sumter, a key fort held by Union troops in South Carolina.

William entered service on 15 May 1861 becoming a Captain and Chief of Artillery with General M. J. Wright’s staff. He was captured at Jackson, Mississippi and paroled on 12 May 1865. After the war he would go into the cotton mill trade in Memphis.

As noted previously, John Joseph Wiggs was born on 21 January 1836 in Holly Springs, Mississippi and died on 04 January 1904 in Russellville, Arkansas. He found himself in Memphis, Tennessee and at the age of 24 and was listed as a druggist in the 1860 US Federal Census. After the Civil War, he returned to Memphis to run Wiggs & Co., (John J. Wiggs and R. M. Harper) who where planing and box manufacturers on Front Street, north of bayou Goyoso. He was also associated with Page & Wiggs in Memphis. Later he would pull up stakes and relocate to Russellville, Arkansas where he ran a drug store with his son, Dr. Henry Blackwell Wiggs (1874-1923).

James A. Wiggs was born in Holly Springs, Mississippi on 17 May 1837. He joined the Confederate army as a private in the 4th Tennessee Regiment in May 1861 and during the first year of the war he was appointed Assistant Quartermaster General of Tennessee. He soon resigned this position and was appointed captain of artillery in the provisional Confederate army. He was chief of ordinance on the staff of General S. D. Lee when the siege of Vicksburg commenced, but was transferred to the staff of General F. A. Shoup as chief of artillery, and was captured during the siege. After being exchanged he was appointed Chief of Staff for General B. M. Thomas at Mobile. After the evacuation of Mobile he was appointed Chief of Artillery for the district of North Mississippi, West Tennessee, and East Louisiana on the staff of General J. J. Wright at Grenada. He was paroled at Jackson, Mississippi, as Lieutenant Colonel of Artillery on May 23, 1865.

After the war, James would partner with William J. Fowler, who was his mothers brother, in a company called Fowler, Wiggs & Co. They were cotton agents and commission merchants located at 256 Front Street in  Memphis, Tennessee. In 1884, Captain Wiggs married Mary Outlaw, of Mississippi, and they lived happily at their handsome country home, south of Starkville, Mississippi, until his death on 27 Janunary 1911. – reference Capt. James A. Wiggs obituary

Unfortunately, I find no direct listing or advertisement showing this figural cabin to be a bitters. I believe it is though. Maybe one of the Memphis collectors can expand on this post. On the Memphis Diggers web site, they say, “This is the best Memphis bitters and the best Memphis bottle. This bottle has almost the same mold as a Drakes Plantation Bitters. We have found one of these without the embossing – what a terrible shame. There is one of these known with the embossing.” Read: Log Cabin Series – Drake’s Plantation Bitters

*Note: A second un-embossed example is known according to Tom Phillips. 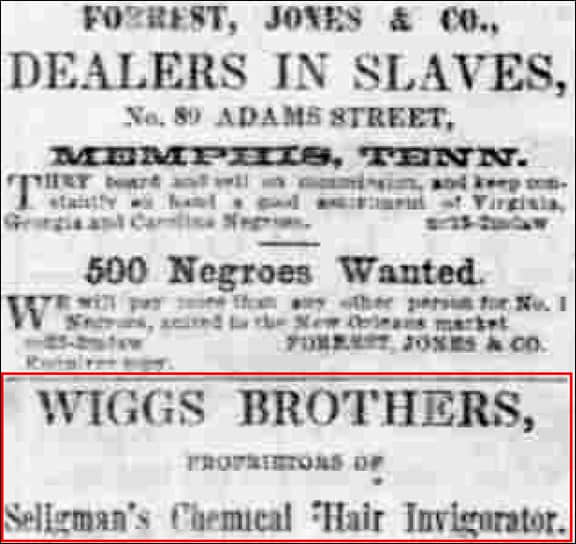 1860: Wiggs Bro’s. & Co., druggists, corner of Main and Union, had numerous small stars, representing the seceding States with the names of which they were labeled; that for South Carolina had a Palmetto flag with the surrounding motto: “Southern Independence.” Many smaller stars and a general lighting up from bottom to roof, made this display noticeable. – Memphis Daily Appeal, August 14, 1860,