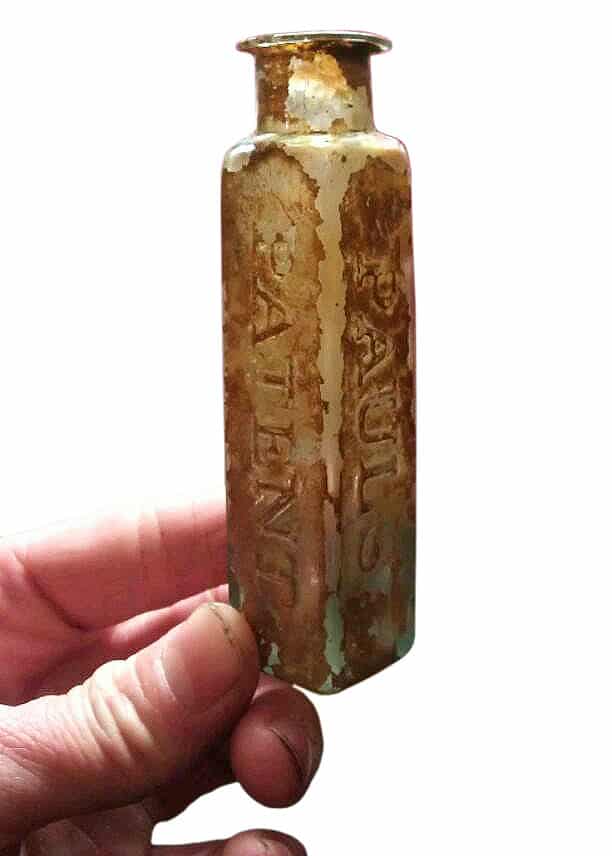 Like many of you, I am really interested in what is being dug and unearthed and love hearing from the people making the finds. Here we have Baltimore collector, Chris Rowell, talking about his latest find. I suspect that is Chris holding the new bottle above. The picture further below is Chris’s first bottle.

So a few months ago a previously unknown early Baltimore medicine comes up on ebay with some lip damage. So I buy it just to have an example thinking what are the odds I’d ever see another one. Well then we dig one Saturday… Go figure… But interestingly it is a completely different mold variation then the one I bought so I will have to keep them both. For consideration Paul’s Patent Columbian Oil circa 1812-1817“

Thomas Paul was the sole inventor and proprietor of Paul’s Patent Columbian Oil which he claimed would cure just about anything. He patented the product in Baltimore on February 23, 1811. Most of the patents prior to 1836 were lost in the December 1836 fire. Only about 2,000 of the almost 10,000 documents were recovered. Little is known about this patent. There are no patent drawings available.

Thomas Paul was originally from Philadelphia and is referenced in advertisements in The Pittsburgh Gazette from September 1812 to June 1813 saying that he has moved to Baltimore city and that the druggist Dr. John Love was going to be his sole agent for the United States of America and dependencies. Dr. Love took it seriously and advertised that all bottles would contain PAUL’S PATENT COLUMBIAN OIL in the glass and that the bottles would be sealed in red wax and stamped with his initials. He would also sign each label in red ink. Now that is pretty cool and would make a nice package. I wonder if a complete example will ever be found?

Dr. Love also authorized J. P. and J. W. Skelton in Pittsburgh to be his eastern representatives and T. C. Barker & Co. in Cincinnati to be the sole agent for the “Western Country”.

Here is another reference to a distributor of the subject medicine:

Less than one month later, having lost the majority of his land holdings, but not all of his liquid assets, George’s father bought a home on three lots for $850 in the town of Brookeville, located nearby in Montgomery County, and relocated his remaining family, including George, who had caused the forced relocation. Shortly after the Gassaway family moved to Brookeville, Brice apparently became a distributor of “Paul’s Patent Columbia Oil.” The oil was described as a cure-all for a variety of different ailments, including whooping cough, rheumatism, consumption, and a variety of aches and pains. Local legend holds that George Gassaway was running the store on the corner of High and Market Streets in the town by 1814, which may indicate that he had placed his father’s name on yet another one of his business plans.

Thomas Paul and Dr. John Love must have moved on because I find little reference about them any later than what is mentioned in this post. It could be just bad record-keeping though. They certainly are not listed in the 1822 Baltimore City Directory which is the earliest I could find.

Typical Paul’s Patent Columbian Oil advertisements from The Pittsburgh Gazette in 1812 and 1813.

Ferdinand Meyer V is a native of Baltimore, Maryland and has a BFA in Fine Art and Graphic Design from the Kansas City Art Institute and School of Design. Ferdinand is the founding Principal of FMG Design, a nationally recognized design consultation firm. Ferdinand is a passionate collector of American historical glass specializing in bitters bottles, color runs and related classic figural bottles. He is married to Elizabeth Jane Meyer and lives in Houston, Texas with their daughter and three wonderful grandchildren. The Meyers are also very involved in Quarter Horses, antiques and early United States postage stamps. Ferdinand is the past 6-year President of the Federation of Historical Bottle Collectors and is one of the founding members of the FOHBC Virtual Museum.
View all posts by Ferdinand Meyer V →
This entry was posted in Advertising, Digging and Finding, Druggist & Drugstore, History, Medicines & Cures, News and tagged Baltimore, Chris Rowell, Cincinnati, Columbian, J. P. Skelton, J. W. Skelton, John Love, oil, Patent, Paul, Philadelphia, T. C. Barker & Co.. Bookmark the permalink.