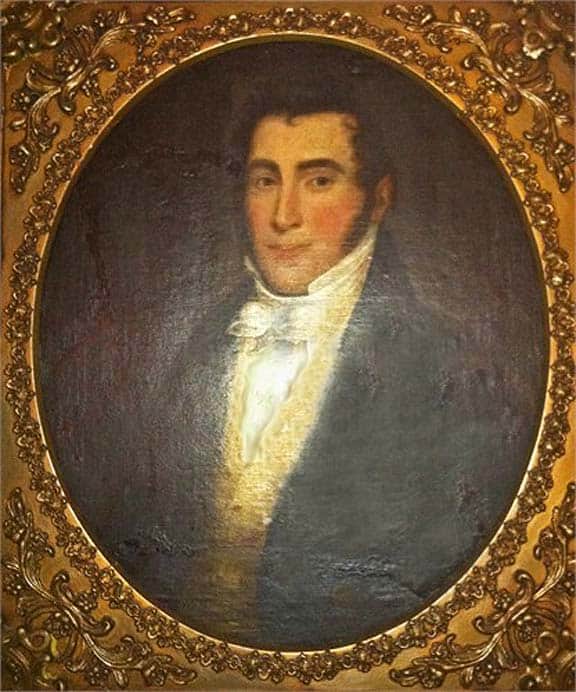 Louis H. Gouley portrait by an unknown artist, estimated to have been painted between 1820 and 1830, when Louis Gouley lived in Philadelphia, Pennsylvania. [Original image, courtesy of George Lewis, Severna Park, Maryland. Repaired version by Michael Tormey.] 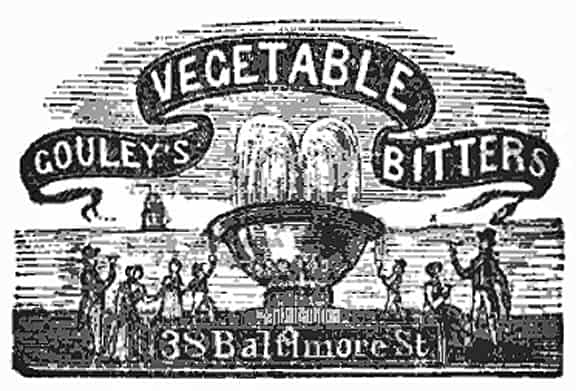 Yep, had to be a Frenchman with that name. I was looking thru some older Baltimore City Directories and was reminded of an advertisement for Louis Gouley’s Vegetable Medicinal Store. It says he made a Gouley’s Vegetable Bitters as you can see in the yellow advertisement below from an 1842 Directory! I also remember a super, Gouley’s Fountain of Health bottle from a past Heckler action. That is also pictured further below. 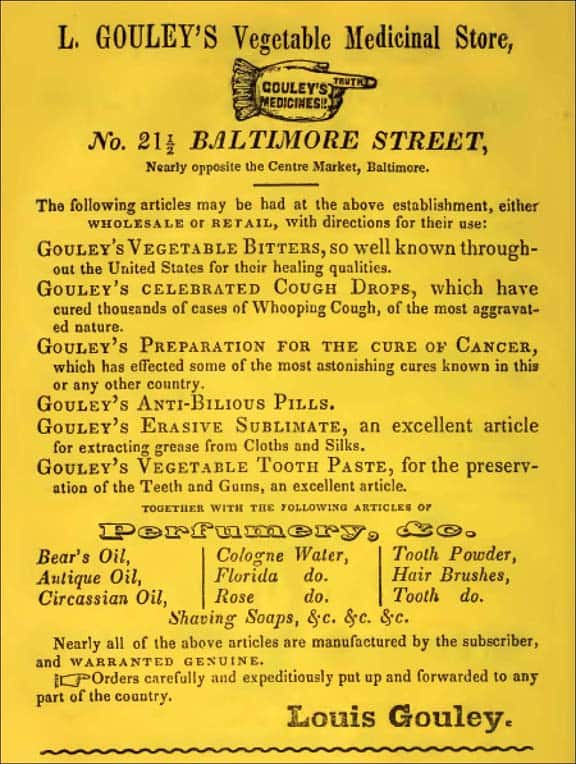 Louis Henry Gouley was born on 25 August 1790 in Sangvilleux, France. Sangvilleux is today known as Saigneville and is located in the Department of Somme, in the region of Picardy, in northern France. He immigrated to America on 12 November 1817, when he arrived at the port of Philadelphia, Pennsylvania. His “Declaration of Intent” to become a U.S. Citizen was dated 20 Sep 1823. There is documentation of his subsequent oath in open court, dated 8 Oct 1827, finalizing his citizenship. While in Philadelphia, Gouley ran a restaurant as evidenced by this newspaper advertisement below for Louis Gouley’s “Exchange Oyster House“, that appeared in the Philadelphia Inquirer on 15 May 1833 (see below). Many of his customers were medical students based on other advertisements so I wonder if this interaction led him to his career in selling medicine? 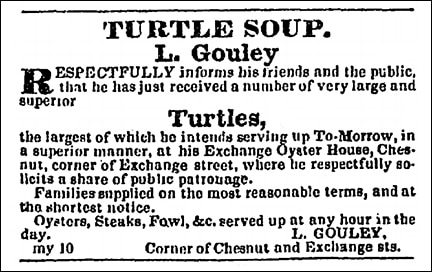 Turtle Soup being served up by L. Gouley at the Exchange Oyster House in Philadelphia – Philadelphia Inquirer, 15 May 1833

I guess making turtle soup was not his destiny and Louis came to Baltimore in 1834 and opened his medicine store at 21 1/2 Balimore street around 1835 and continued until his death on 16 October 1849. The advertisement further below shows that in 1837, he had not started making and marketing his bitters yet as Gouley’s Vegetable Bitters is not mentioned until 1839. The direct picture below represents the time period in discussion. 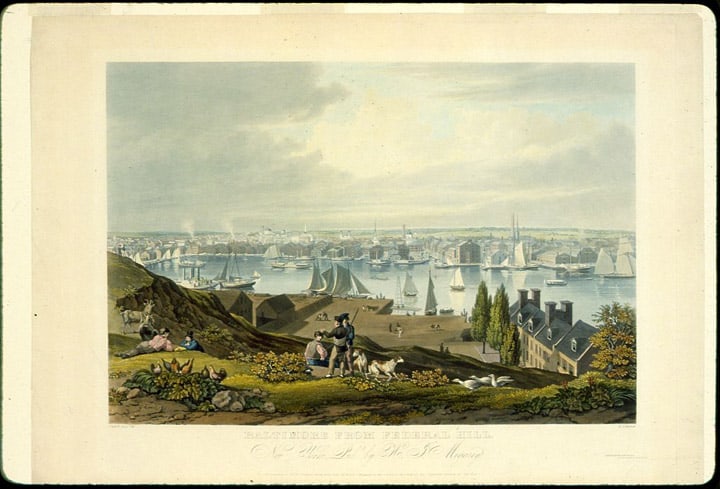 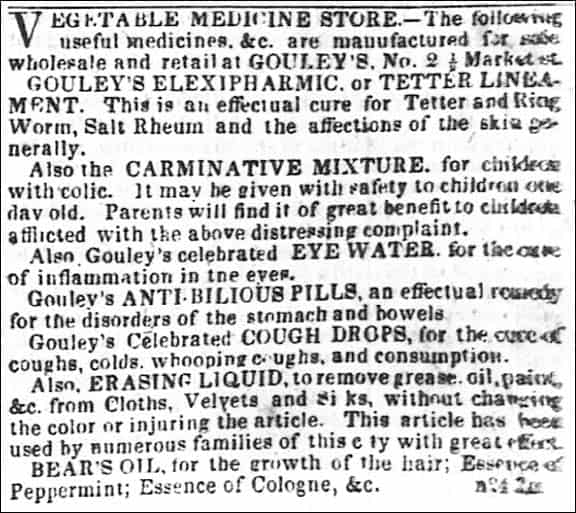 Here is a clipping from the Baltimore Sun on 10 April 1839 that reads:

COMMUNICATED. – I was much pleased in passing along Baltimore street a few days since, to see the great improvements made by Mr. L. Gouley, in the enlargement of his store, No. 21 1/2. It will be remembered by many upon what small scale he commenced operations in this city, some three or four years since, and it is no doubt a source of gratification to his numerous friends, to know that he has been enabled by perseverance and industry, to open one of the handsomest stores in the city. It at the same time goes far to prove that his medicine must be in great demand, and generally used, to authorize him to increase his business to such an extent. The citizens of Baltimore should continue to patronize Mr. G., (especially the ladies) for, in addition to the articles of his own manufacture, he keeps a great many fancy articles, particularly adapted to the ladies’ use. He has also fitted up a private office, where any one willing to consult him in regard to the use of his medicines, can do so with convenience. I would also take this opportunity of calling the attention of the public to a beautiful sign, painted by Mr. Polly, for Mr. Gouley, as an excellent specimen of the beautiful workmanship of our Baltimore artists. – A FRIEND TO MERIT. 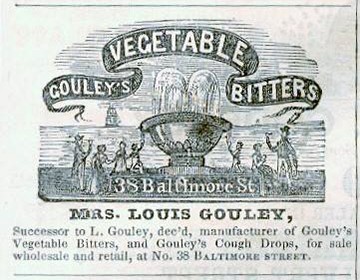 Another clipping from the 27 March 1839 Baltimore Sun dates the bitters to at least 1839:

MR. GOULEY, the well known inventor of the celebrated bitters which are called by his name, has enlarged his establishment by taking the store adjoining his old stand, No. 21 1/2 Baltimore street near Harrison. The establishment is fitted up in a superior manner, and persons wishing a private consultation, will find the accommodation of a handsomely furnished drawing-room. 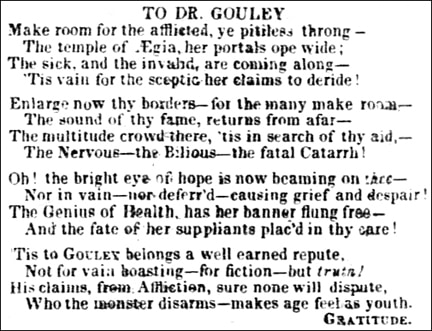 Poem about Louis Gouley’s herbal medicinal products, as appeared in the Baltimore Sun newspaper on 30 April 1839. Note how he is referred to as Dr. Gouley.

Louis Gouley was married first to Mary Ann Washington on 23 December 1824 at the Trinity Episcopal Church in Wilmington, Deleware and they had four children, John L., Elizabeth Washington, George Frank and Mary S. Gouley. They were divorced in 1840. His second marriage was to Charlotte Elizabeth Lynch on 8 July 1841 and they also had four children, Louis Edward Napolean, Charles Lafayette, Charlotte Elizabeth Julie and Adelaide Louise Gouley. His second wife Charlotte, and their son, Louis, Jr. (1842-1870) would later carry the torch for a short time for the Gouley medicines after Louis’s death. 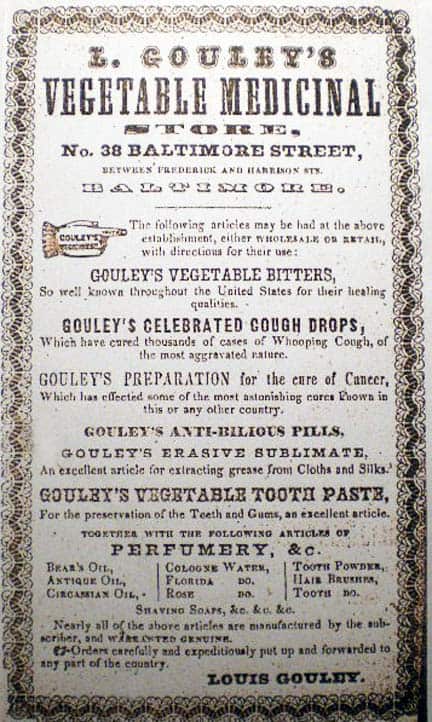 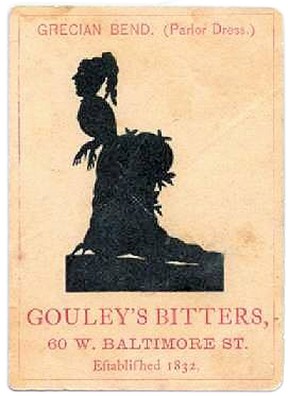 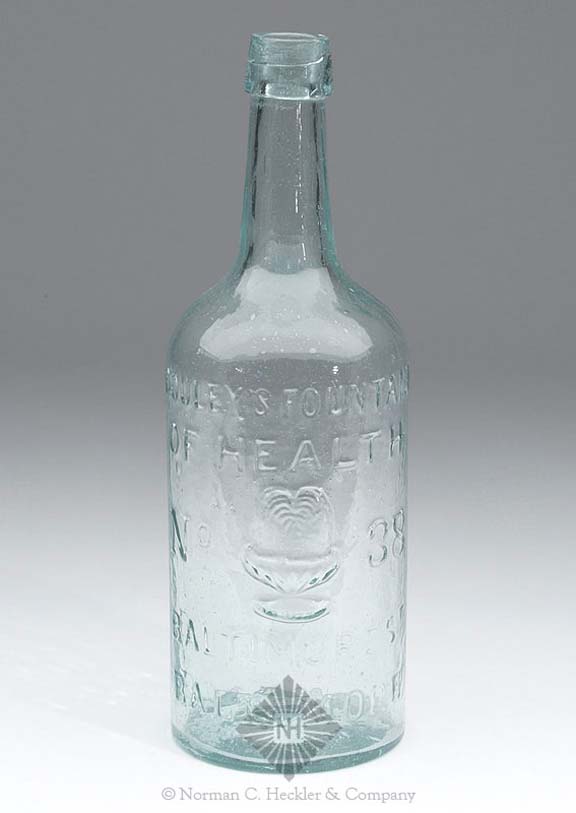 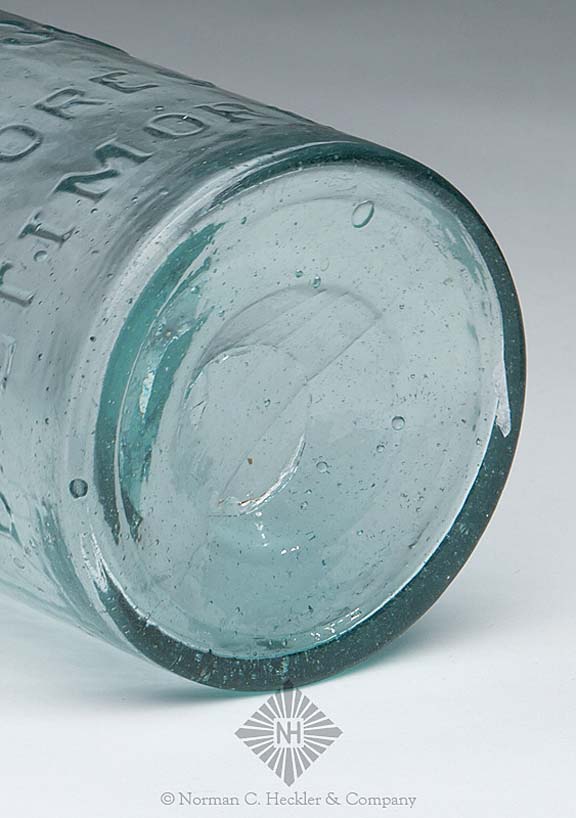 Ferdinand Meyer V is a native of Baltimore, Maryland and has a BFA in Fine Art and Graphic Design from the Kansas City Art Institute and School of Design. Ferdinand is the founding Principal of FMG Design, a nationally recognized design consultation firm. Ferdinand is a passionate collector of American historical glass specializing in bitters bottles, color runs and related classic figural bottles. He is married to Elizabeth Jane Meyer and lives in Houston, Texas with their daughter and three wonderful grandchildren. The Meyers are also very involved in Quarter Horses, antiques and early United States postage stamps. Ferdinand is the past 6-year President of the Federation of Historical Bottle Collectors and is one of the founding members of the FOHBC Virtual Museum.
View all posts by Ferdinand Meyer V →
This entry was posted in Advertising, Bitters, Druggist & Drugstore, History, Medicines & Cures and tagged Baltimore, Exchange, ferdinand meyer, fountain, france, Gouley, health, Heckler, Henry, house, louis, maryland, medicinal, Medicine, Oyster, Pennsylvania, Philadelphia, Saigneville, Sangvilleux, soup, turtle, Vegetable. Bookmark the permalink.