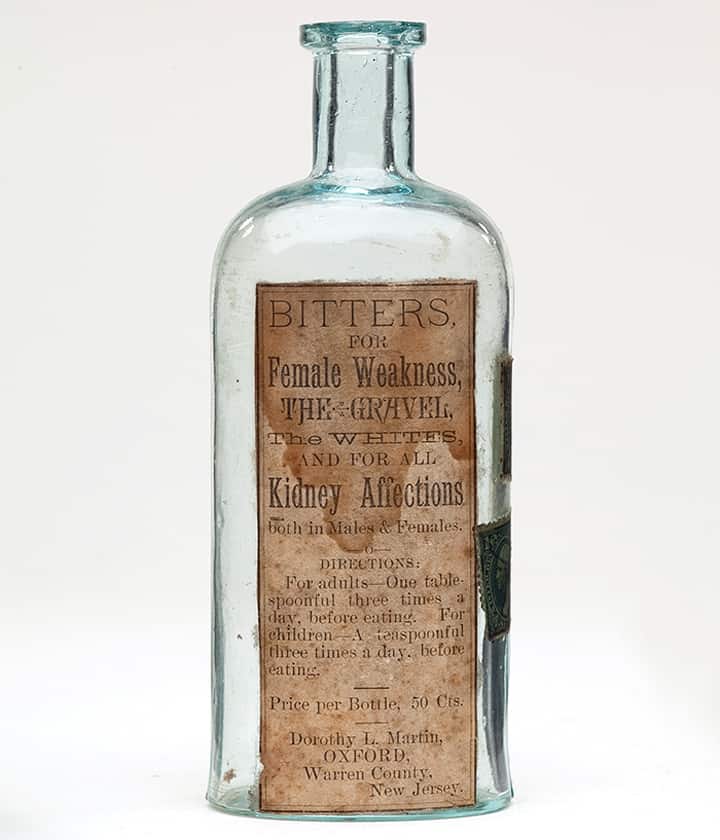 Dorothy L. Martin’s, Bitters for Female Weakness, The Gravel, The Whites and For All Kidney Affections

What an super series of photographs for Dorothy L. Martin’s, Bitters for Female Weakness etc. in the present American Glass Gallery Auction 12. Nice little package here with a label, two proprietary stamps and a great product name. I love it. Not much on Mrs. Martin other than she may have been born about 1826 and died on April 5, 1884 in Oxford, New Jersey. She would have been married to Phillip J. Martin (1823 – 19134). The brand reminds me of Dr. Dromgoole’s English Female Bitters & Yellow Fever. 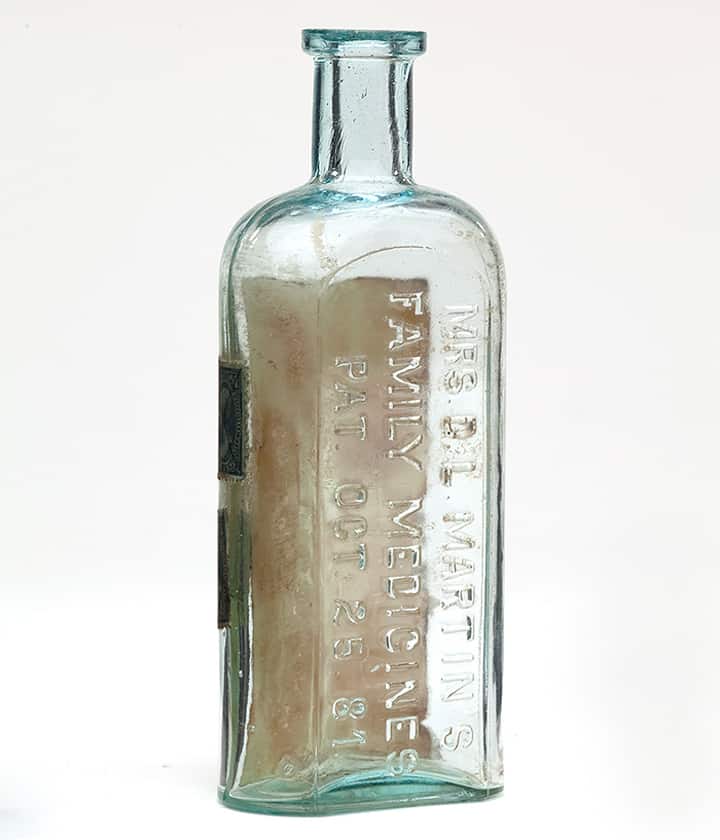 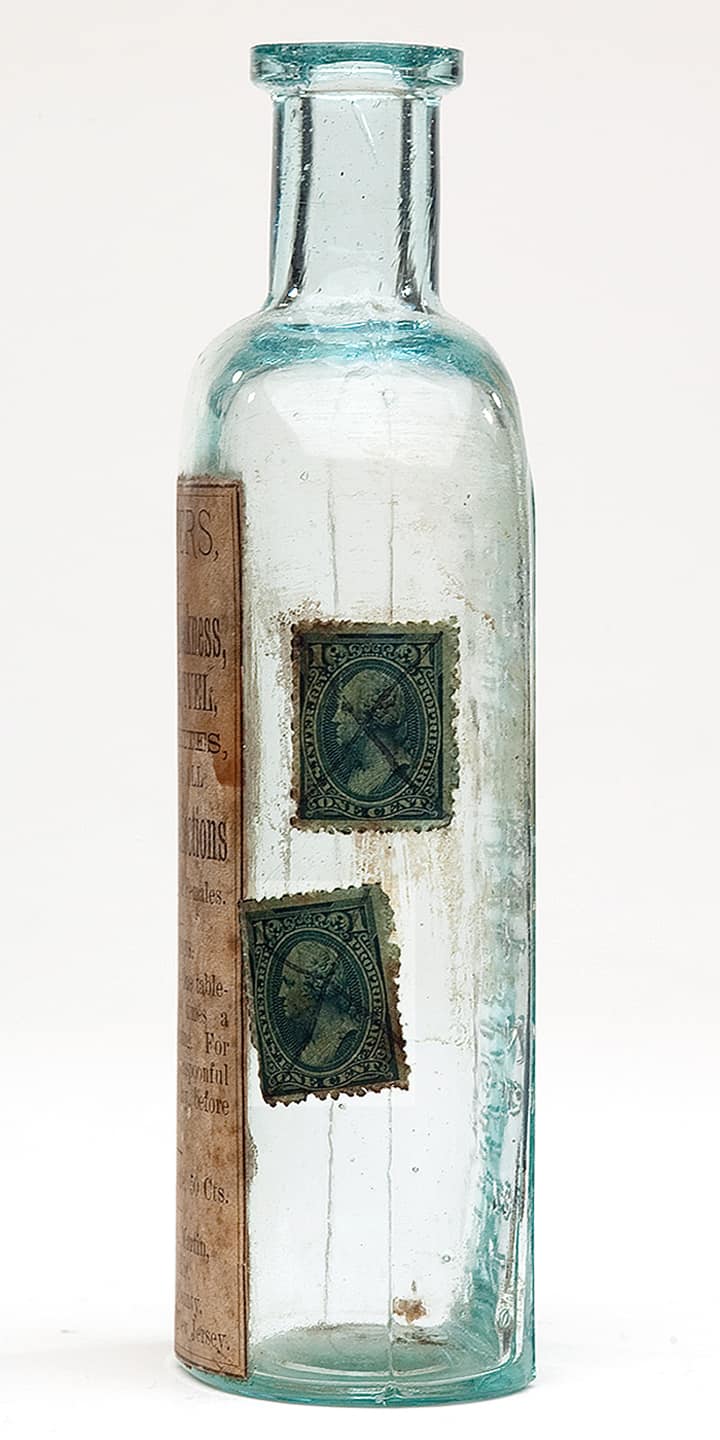 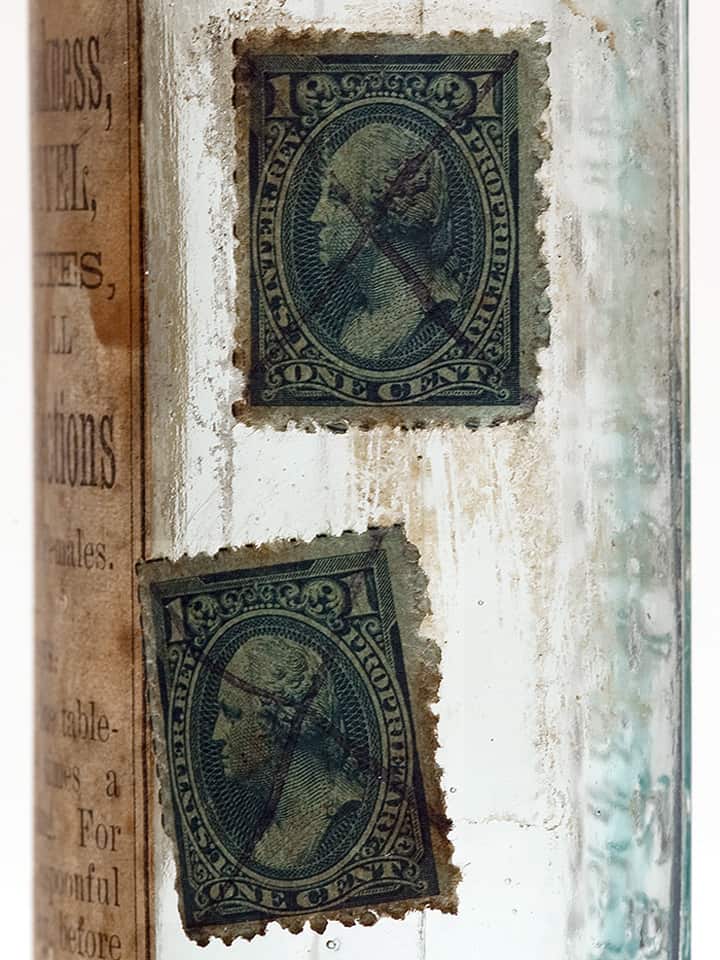 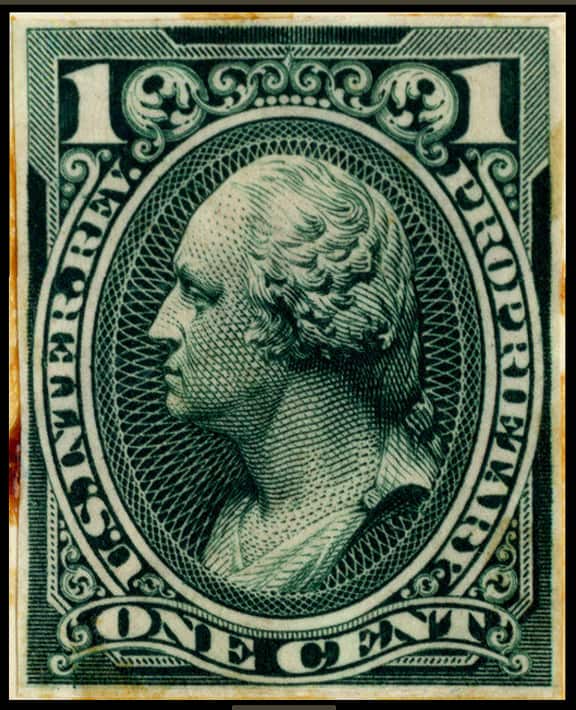 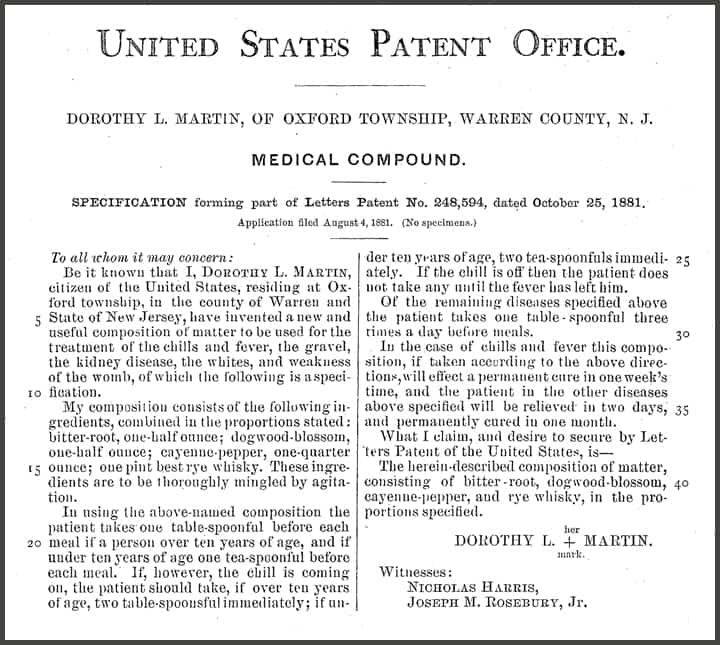 Be it known that I, DOROTHY L. MARTIN, citizen of the United States, residing at Oxford township, in the county of Warren and State of New Jersey, have invented a new and useful composition of matter to be used for the treatment of the chills and fever, the gravel, the kidney disease, the whites, and weakness of the womb, of which the following is a specification.

My composition consists of the following ingredients, combined in the proportions stated: bitter-root, one-half ounce; dogwood-blossom, one-half ounce; cayenne-pepper, one-quarter ounce; one pint the best rye whisky. These ingredients are to be thoroughly mingled by agitation.

Of the remaining diseases specified above the patient takes one tablespoonful three times a day before meals.

In the ease of chills and fever this composition, if taken according to the above directions, will effect a permanent cure in one week’s time, and the patient in the other diseases above specified will be relieved in two days, and permanently cured in one month.

What I claim, and desire to secure by Letters Patent of the United States, is –

The herein-described composition of matter, consisting of bitter-root, dogwood-blossom, cayenne-pepper, and rye whisky, in the proportions specified.

Ferdinand Meyer V is a native of Baltimore, Maryland and has a BFA in Fine Art and Graphic Design from the Kansas City Art Institute and School of Design. Ferdinand is the founding Principal of FMG Design, a nationally recognized design consultation firm. Ferdinand is a passionate collector of American historical glass specializing in bitters bottles, color runs and related classic figural bottles. He is married to Elizabeth Jane Meyer and lives in Houston, Texas with their daughter and three wonderful grandchildren. The Meyers are also very involved in Quarter Horses, antiques and early United States postage stamps. Ferdinand is the past 6-year President of the Federation of Historical Bottle Collectors and is one of the founding members of the FOHBC Virtual Museum.
View all posts by Ferdinand Meyer V →
This entry was posted in Bitters, History, Medicines & Cures, Tax Stamps and tagged bitters, Dorothy, Female, Martin, New Jersey, Oxford, Patent, Whitall-Tatum Co.. Bookmark the permalink.