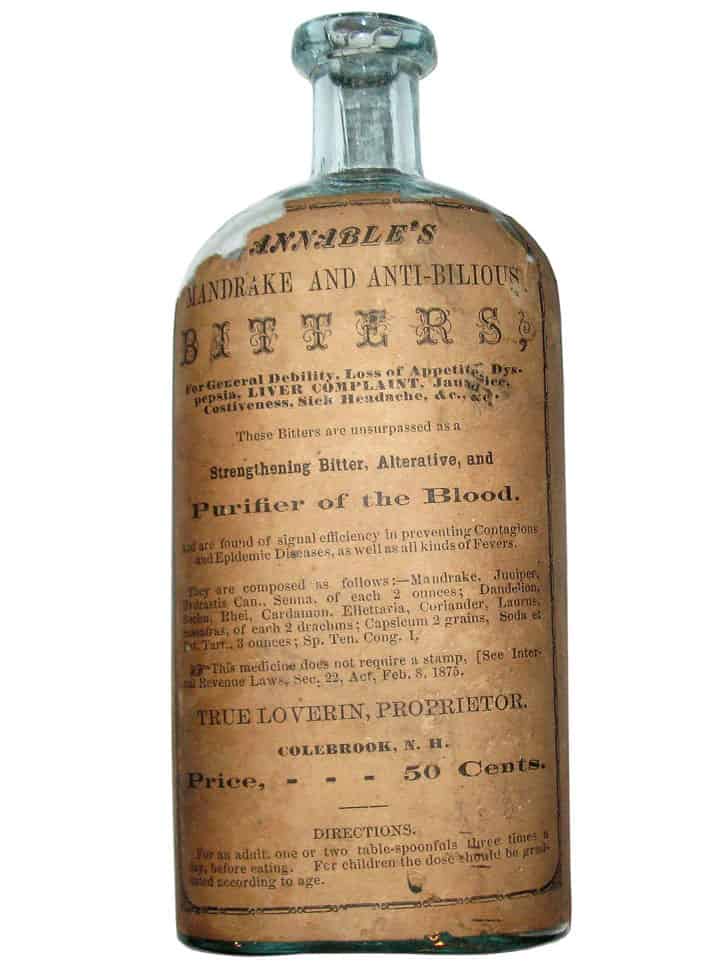 Many of us had the opportunity to attend the great 2013 FOHBC National Antique Bottle Show in Manchester, New Hampshire last year and we look forward to our 2014 National Show in Lexington, Kentucky this year. Today we will revisit New Hampshire, and look at a rather nice example of a labeled, Annable’s Mandrake & Antibilious Bitters made by True Loverin, Proprietor, Colebrook, New Hampshire. Loverin also sold this bitters out of Nashua, New Hampshire.

Brandon DeWolfe (Spring, Texas) sent in the bottle picture in response to him connecting with the recent Russell’s Alterative and Tonic Bitters post which was also made in Nashua. 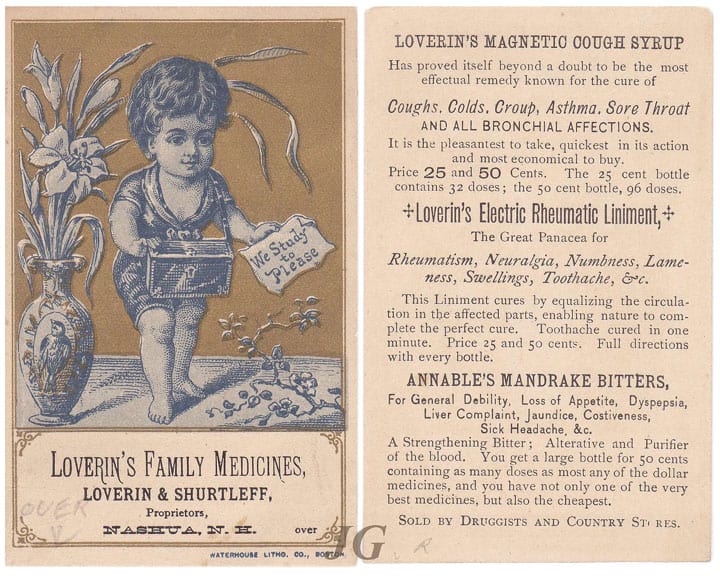 This oval, aqua bottle, is listed as A 71 L in Bitters Bottles meaning it is a labeled bitters. The bottle measures 7 1/2 x 3 1/4 x 1 3/4 (6). Ring & Ham note a sign that reads, “Try Annable’s Mandrake Bitters”. They also note an advertising trade card saying Loverin & Shurtleff, Proprietors, Annable’s Mandrake Bitters. Of course, now I must contact Joe Gourd up in Chicago to see if he has the trade card mended in Ring & Ham. 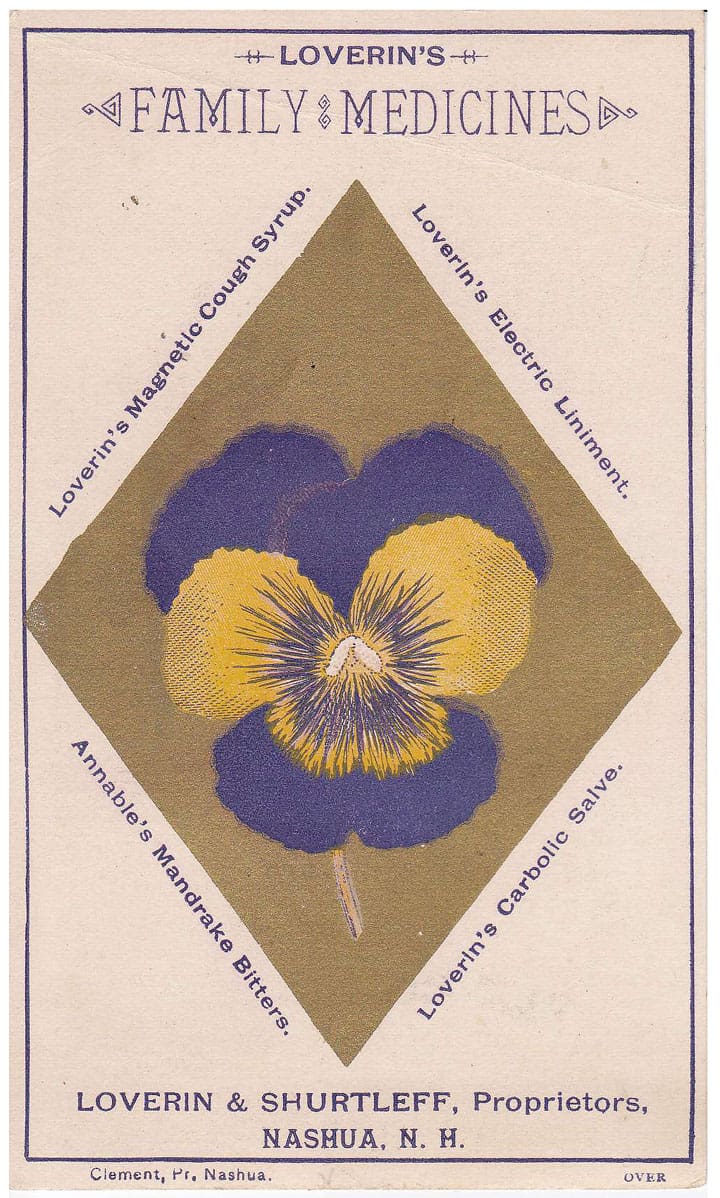 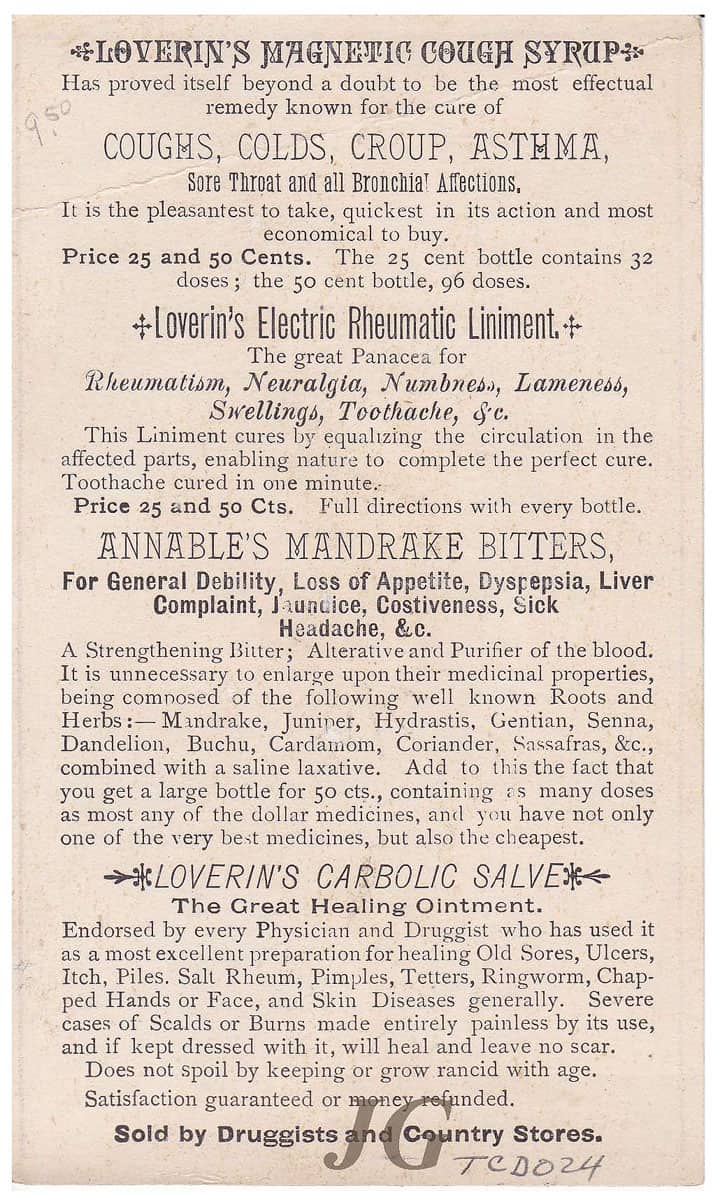 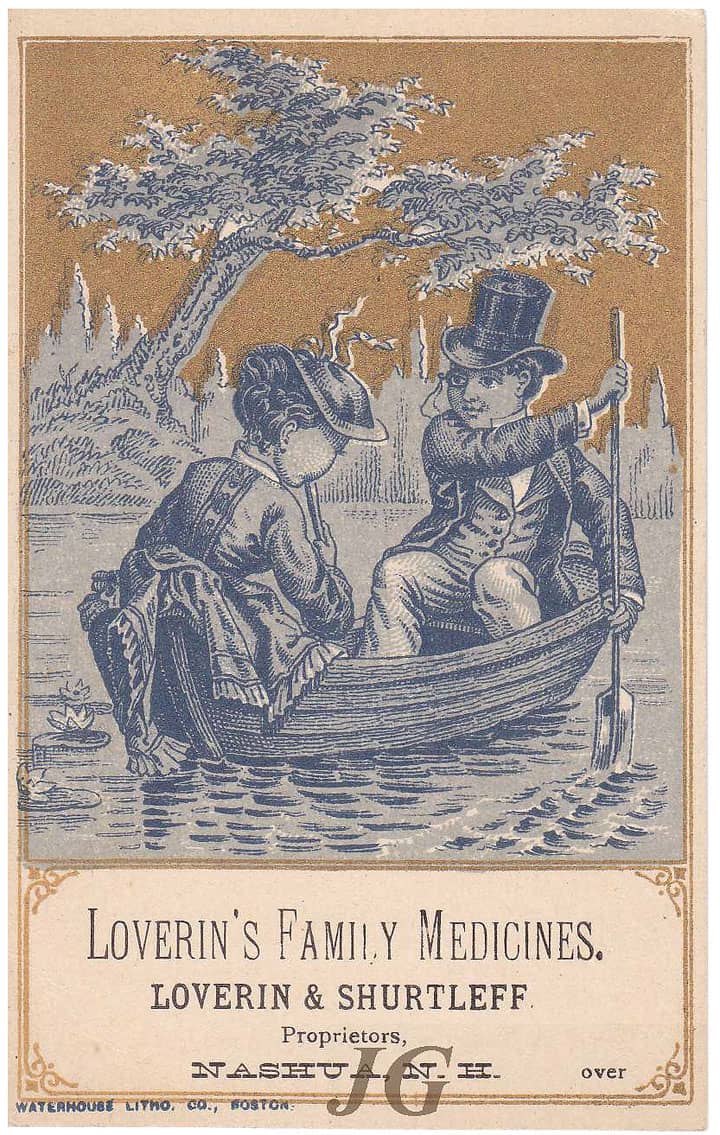 True Loverin certainly has a name that is easy to remember and sounds good.

The story starts with Alfred Loverin who was born in Loudon, New Hampshire on December 11, 1813. Loverin came to Colebrook, New Hampshire, which is at the top of the state and near the Canadian border, with his parents in 1819. His father lived on Harvey Brooks farm. In 1838, Alfred married Lucy Drew, sister of the Honorable Amos W. and Edwin W. Drew, and they settled on the John Gould farm. His wife died in 1842, and he afterward married Susan Fletcher. They had a son, True who was born in 1851. They lived on the farm until 1873, when they moved to Colebrook village, where Alfred died on April 7, 1884. Alfred was a farmer, and during the last twenty years of his life, was largely interested in the starch business, both in Colebrook and in Aroostook County, Maine.

Competition now became general, and a new mill was built by the Merrills at the village, and Alfred Lovering (sic) and D. W. Patrick built another in the Whittemore district. The price of potatoes had advanced from time to time till some years as high as fifty cents per bushel was paid for them; and starch was one year as high as $180 per ton. Colebrook was then one of the great potato-starch centers, one-twentieth of all the starch manufactured in the United States going from this community. After a few years the farmers learned that planting potatoes and selling them all off their farms, leaving nothing to be returned, was the cause of a too rapid depreciation of the soil, and the best farmers planted less and less each year for the starch-mill. Aroostook county, Maine, attracted many of our starch manufacturers, and the starch made in Colebrook has decreased from year to year, till, instead of 1,500 tons, it only sends out about 500 tons yearly. The loss to the starch manufacturers has been gain to the farmer, for he now raises crops that leave his land in better condition, and his potatoes are largely sold to be shipped to market, bringing him such prices that he can purchase the commercial fertilizers, and so keep his farm in a state of fertility. The starch manufacturers of Colebrook and vicinity have become wealthy and have realized fortunes from the industry. – History of Coos County, New Hampshire

True Loverin was born in New Hampshire about 1851. Up until he was 20 years old or so he worked on his families farm. At the age of 22, Lovering became a druggist when he purchases the drug business of Lyman H. Annable in Stewartstown, Coos County in 1869. Annable was a physician from Canada who arrived in town in 1867 and left in 1872.

I had pictured a lovely country woman being the inspiration for Annable’s Mandrake Bitters but alas, I suspect Lyman Annable put out the bitters and True Loverin inherited the brand. 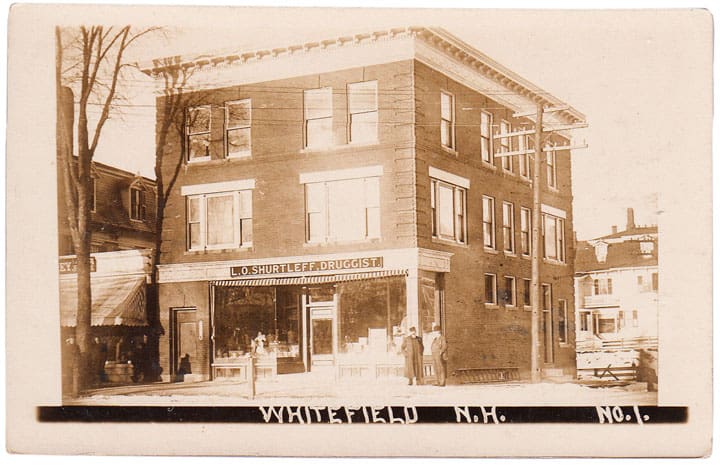 Loverin, thru a string of transactions, sells the drug store to Lyman O. Shurtleff and goes in to business for himself, staying in Colebrook until at least 1880. Shurtleff then sets up shop in Whitefield, New Hampshire (see picture above). Eventually True Loverin moves directly south to Nashua, New Hampshire which is at the bottom of state near the Massachusetts state line and of course the major market of Boston. It is also due south of Manchester. He retains his foothold in Coos County when he takes on Lyman O. Shurtleff as a partner.

True Loverin died on 08 January 1899 of pneumonia when he was 47 years old in Lawrence, Massachusetts. He even had a patent granted to him after his death for a Carriage Wheel. Lyman O. Shurtleff will take over the business and eventually take on his son and the drug business is called Shurtleff & Shurtleff in Whitefield, New Hampshire. 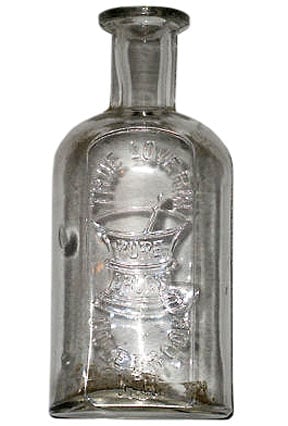 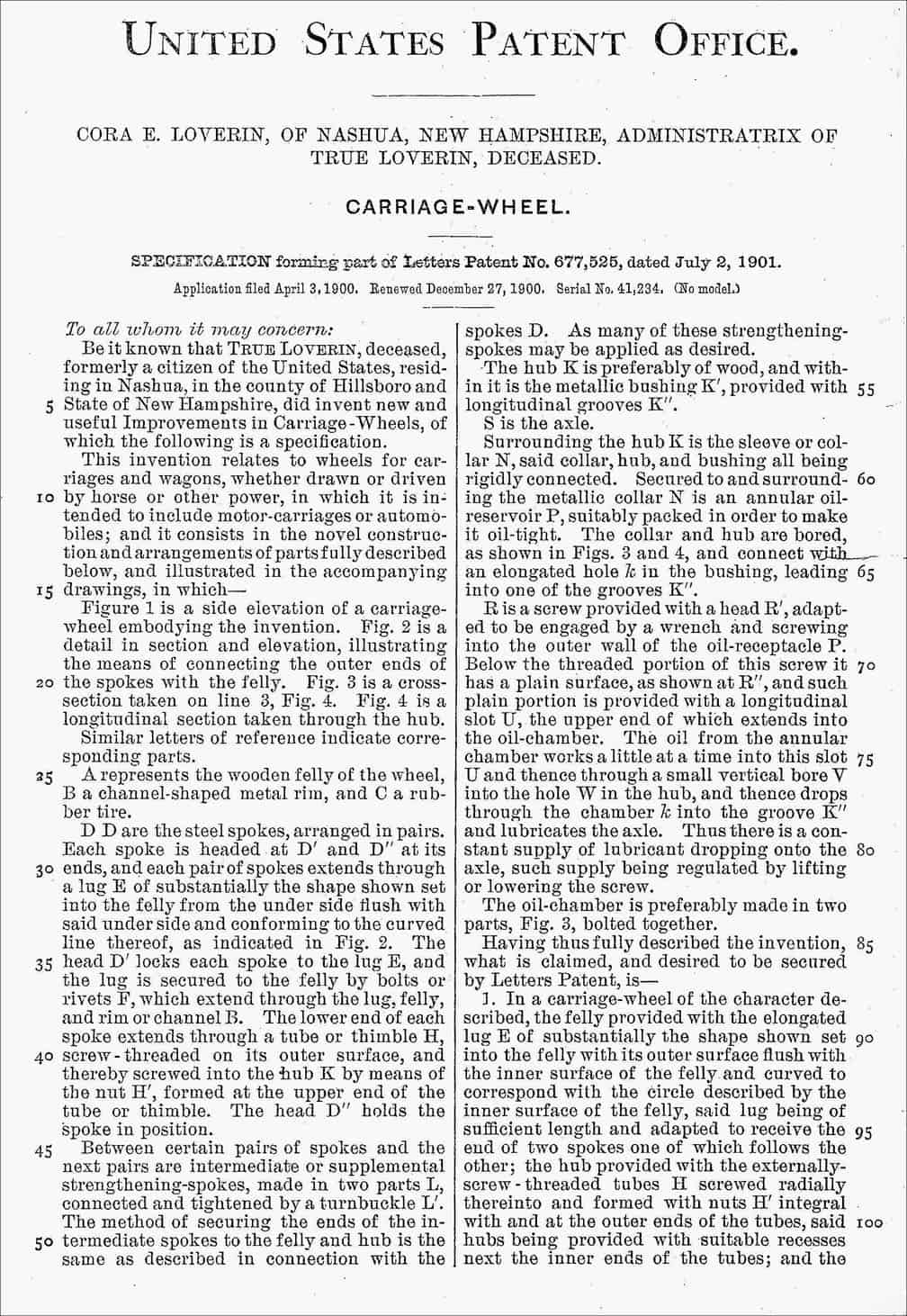 Loverin Patent for a Carriage Wheel 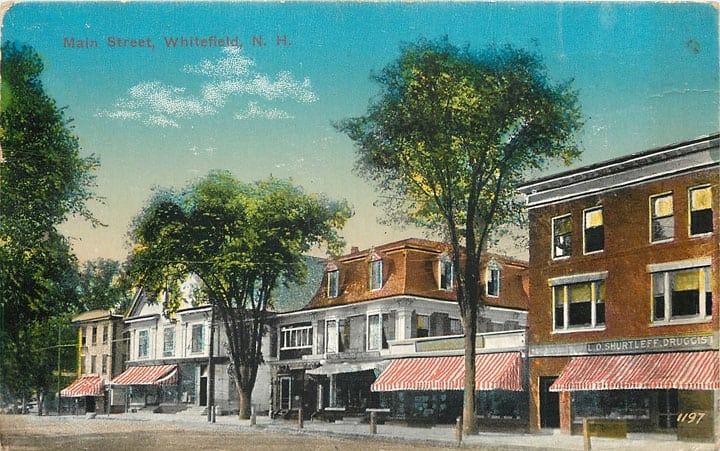