Where is the Jones’ Tonic Bitters from?

Where is the Jones’ Tonic Bitters from?

I have not thought about my extremely rare, Jones’ Tonic Bitters (pictured at the top of post) for some time until I saw that Glass Works Auctions has an outstanding example (see picture below) in its parade of fine bitters in their current auction.

The bottle is somewhat of an enigma as there is not much available information except that one was dug in Mobile, Alabama. Is that my example? Is this current auction bottle the second known example? There is a possible clue in the form of an embossed “1865” date on the bottle. The apostrophe at the end of Jones’ may also be a clue. 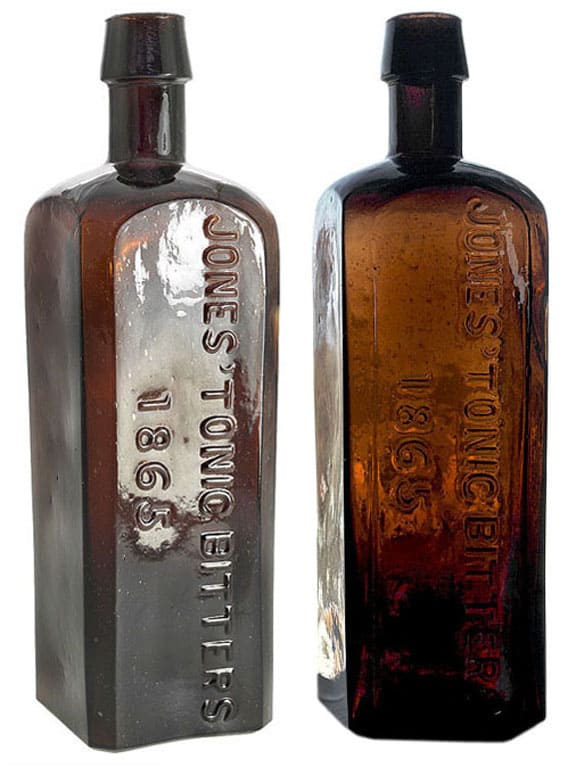 I have been carrying around, in my digital files, an 1866 St. Louis advertisement below for A. Jones & Co. (Amaziah Jones and George C. Wolff) who were the sole manufacturer of Jones’ Celebrated Stomach Bitters. Could this be the same brand? The 1866 advertisement date is right on target though the name is slightly different (tonic vs. stomach bitters). The apostrophe at the end of Jones’ is the same treatment though. Is St. Louis, Missouri and Mobile, Alabama connected? 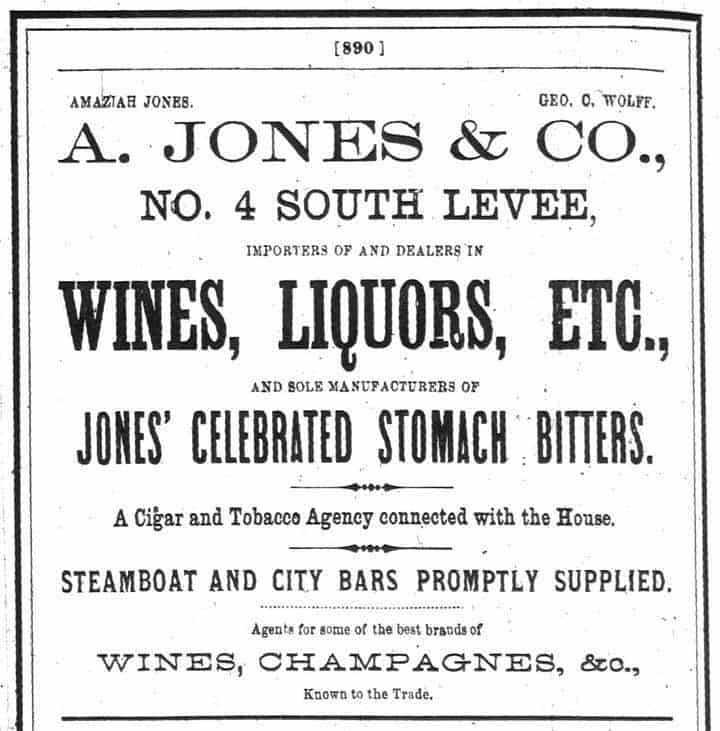 A. Jones & Company selling Jones’ Celebrated Stomach Bitters. Could this be the same brand? The date is certainly right in line – St. Louis newspaper, 1866

Carlyn Ring and Bill Ham indicate the Jones’ Celebrated Stomach Bitters (no bottle examples have been documented) as a separate listing in Bitters Bottles and have cataloged it as: 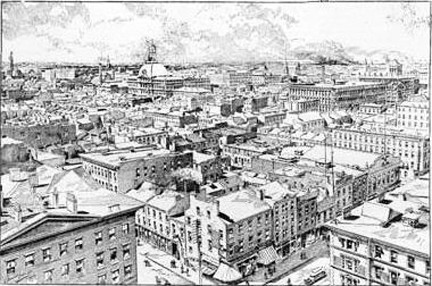 1866: Amaziah Jones and George C. Wolff of A. Jones & Co., liquor merchants, successful bidders for the bars of fourteen steamers.

In the 1860s, Mississippi steamers were departing St. Louis daily for growing American cities both north and south. In 1861, George C. Wolff  formed a co partnership with George A. Hynes, of St. Louis, under the firm name of Wolff & Hynes, liquor dealers.  This house transacted an enormous business at one time, owning the “bars” on thirty boats, including all those of the celebrated Atlantic and Mississippi Steamship Co.’s line. 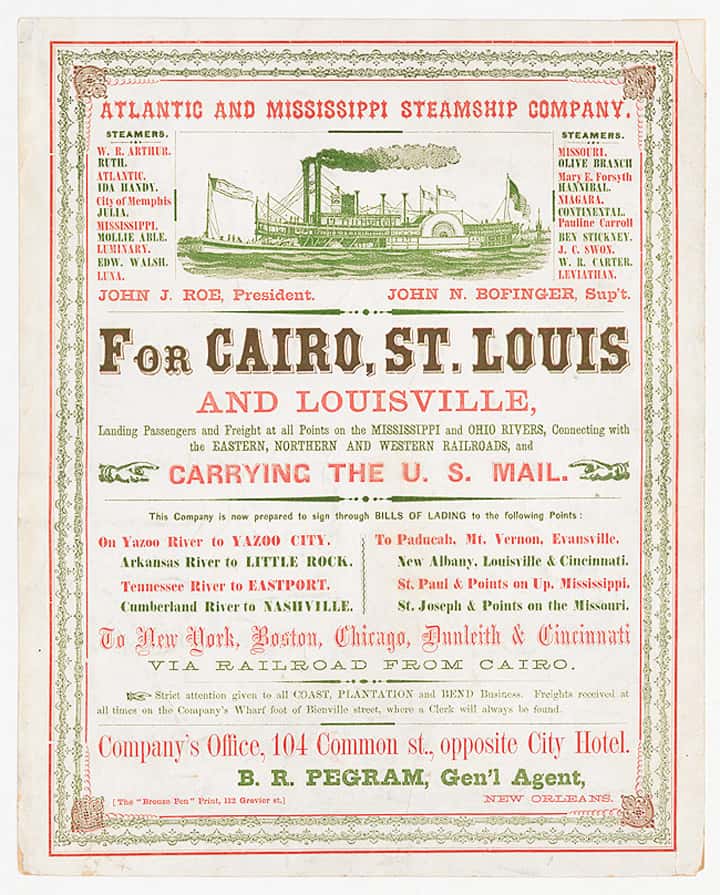 Atlantic and Mississippi Steamship Company broadside. Note the listing of the Olive Branch from Missouri. This was one the the steamers that Amaziah Jones had a bar contract with. – Duke University Library 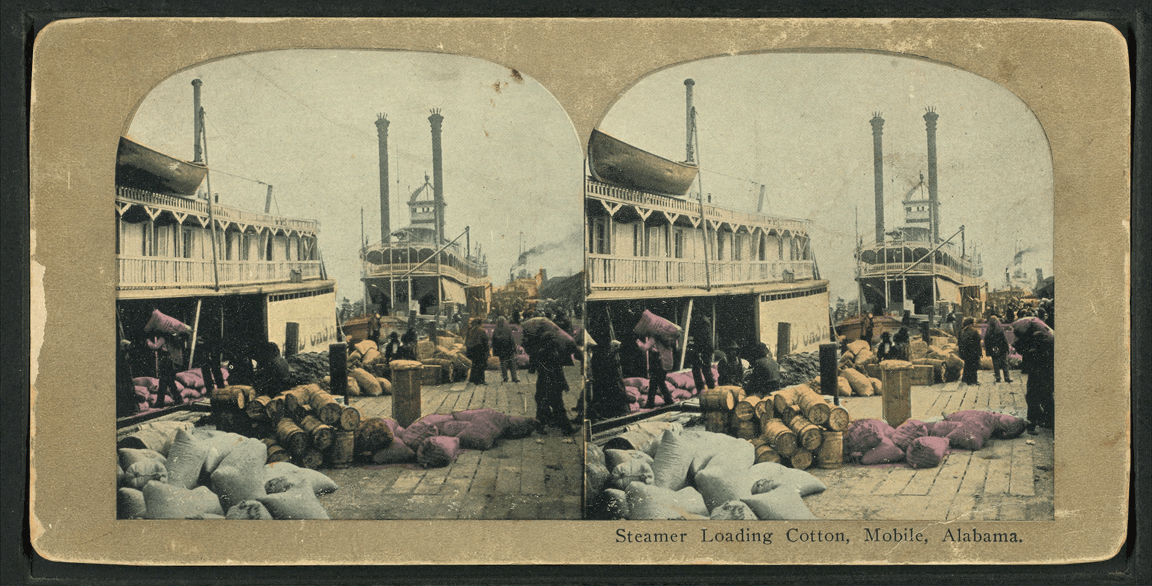 Steamer loading cotton aboard the Hard Cash in Mobile, Alabama, from the Robert N. Dennis collection of stereoscopic views

in 1866, Amaziah Jones and George C. Wolff of A. Jones & Co., liquor merchants, were the successful bidders (see notice below) for supplying and operating the bars on fourteen steamers out of St. Louis. The bars were rented for one year, and six months rent was to be paid in advance. One of the steamers was the Mobile, Alabama. Remember, the Jones’ Tonic Bitters was dug in Mobile, Alabama. These dates fit together nicely and might mean that the Jones’ Tonic Bitters and Jones’ Celeberated Stomach Bitters are related. At this point, more research is required. 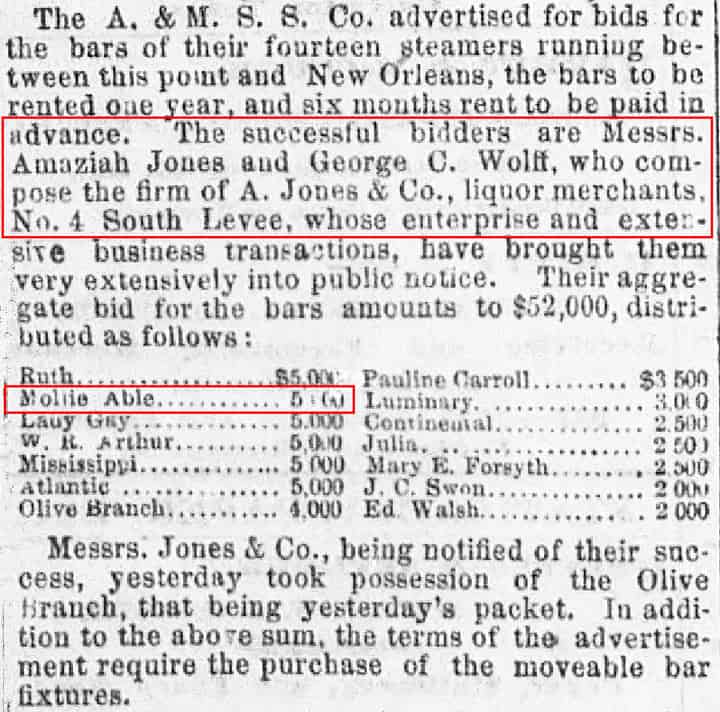 Ferdinand Meyer V is a native of Baltimore, Maryland and has a BFA in Fine Art and Graphic Design from the Kansas City Art Institute and School of Design. Ferdinand is the founding Principal of FMG Design, a nationally recognized design consultation firm. Ferdinand is a passionate collector of American historical glass specializing in bitters bottles, color runs and related classic figural bottles. He is married to Elizabeth Jane Meyer and lives in Houston, Texas with their daughter and three wonderful grandchildren. The Meyers are also very involved in Quarter Horses, antiques and early United States postage stamps. Ferdinand is the past 6-year President of the Federation of Historical Bottle Collectors and is one of the founding members of the FOHBC Virtual Museum.
View all posts by Ferdinand Meyer V →
This entry was posted in Advertising, Auction News, Bitters, Digging and Finding, History, Liquor Merchant, Medicines & Cures, Questions, Tonics and tagged 1865, alabama, Amaziah, apostrophe, Atlantic, bar, bitters, branch, Henry, Hynes, Jones', liquor, Mississippi, Missouri, Mobile, olive, Saloon, St. Louis, Steamship, Stomach, Tonic, Wolff. Bookmark the permalink.