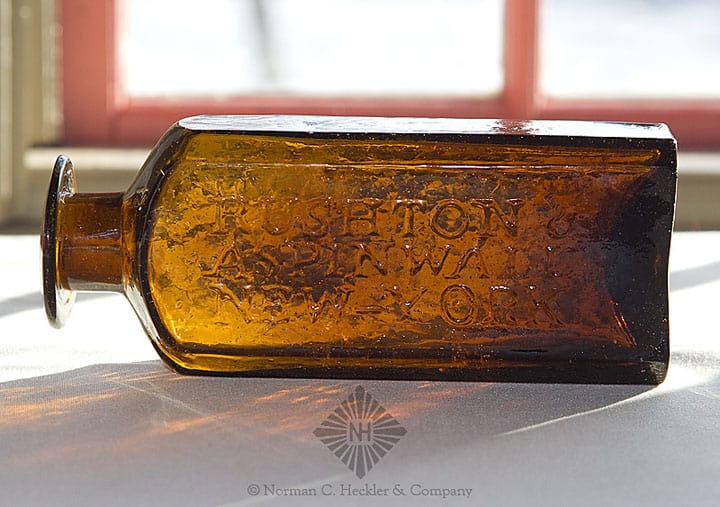 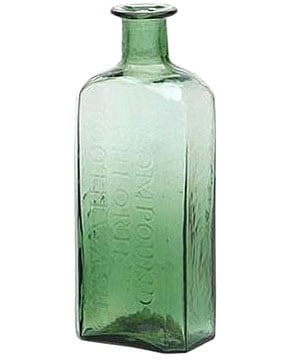 Sandor Fuss (Denver) tipped me off to watch an incredible bottle that is making hay in the latest Norman C. Heckler Auction 108 that is currently on line and accepting bids. Wow, was he right. Look at the form, crudity and mouth treatment of this killer medicine! Let’s take a closer look at the Rushton & Aspinwall Compound Chlorine Toothwash from New York. The Heckler description is as follows. All pictures of the Rushton & Aspinwall are from Heckler including the green example that sold at a previous auction.

Norman Heckler notes that the current yellow amber example is “probably a Stoddard or Keene glasshouse” piece. The gorgeous green example pictured above could be from Willington Glass Works according to Hecker. Their auction description:

If you look carefully, you will see that both molds are represented in this post. 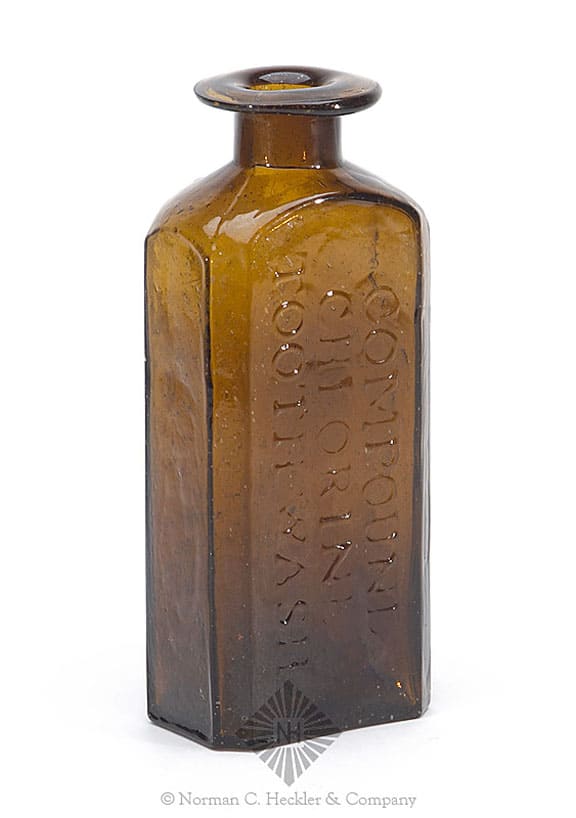 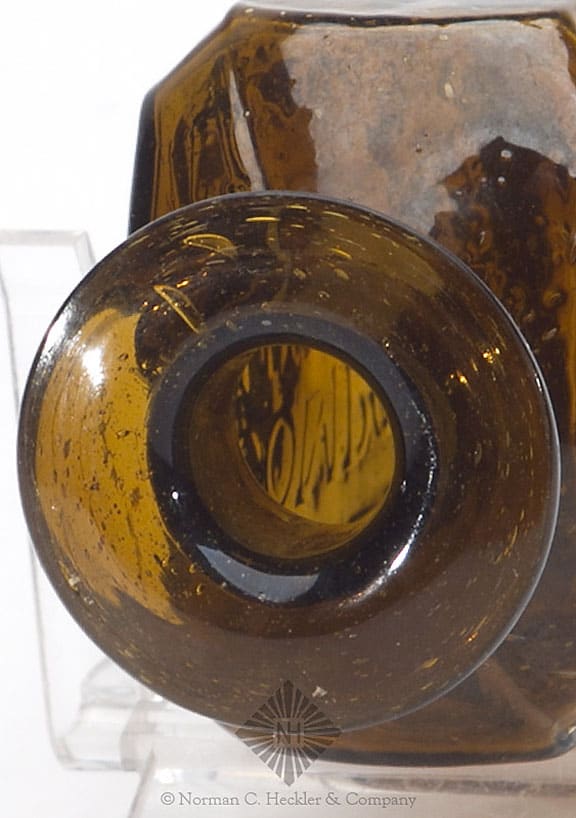 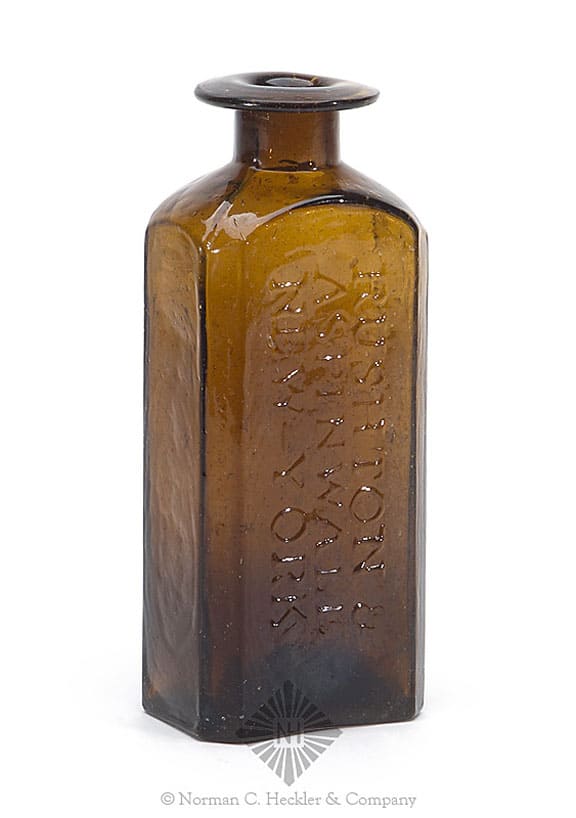 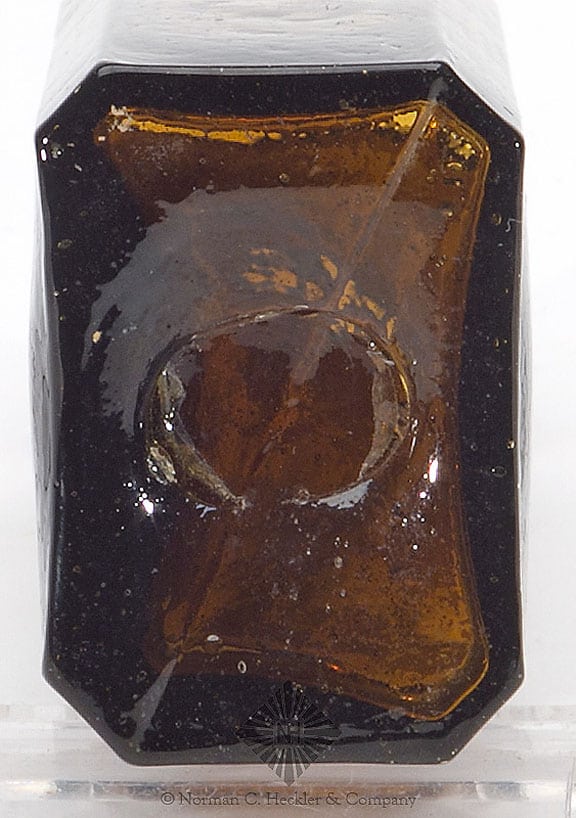 Tod von Mechow, in his excellent and comprehensive web site, Soda and Beer Bottles of North America states that “Rushton & Aspinwall were leading druggist of their time in New York City. In 1827, William L. Rushton opened a drug store at 81 William Street, which was previously the dry goods store of Reuben & Henry M. Sikes. James S. Aspinwall does not appear in the directories prior to the partnership.”

Tod mentions that “Rushton and Aspinwall joined forces in the late 1830s at the 81 William Street location.“ Actually, Rushton and Aspinwall were listed as partners in 1830. Todd further states, “In 1833 they opened a second location at 110 Broadway. It is important to note that they moved their William Street store from 81 to 86 William in 1835 and in 1836 they added a third location at 10 Astor House”.

What is fascinating is how long this product dates back to. This 1833 advertisement below states that Low & Reed’s had the Original and Genuine Compound Chlorine Tooth Wash. It was sold by Rushton & Aspinwall, Druggists on 81 William Street. 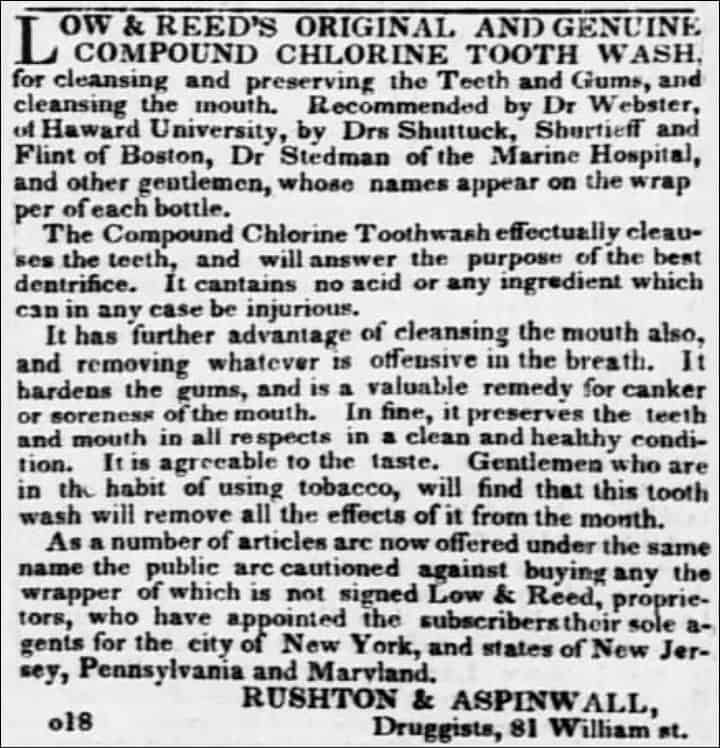 Below is a receipt from James S. Aspinwall in 1862. If you look closely, it says formerly Rushton & Aspinwall, 1830. This partnership was early. It would be interesting to see if any Low & Reed bottles exist. 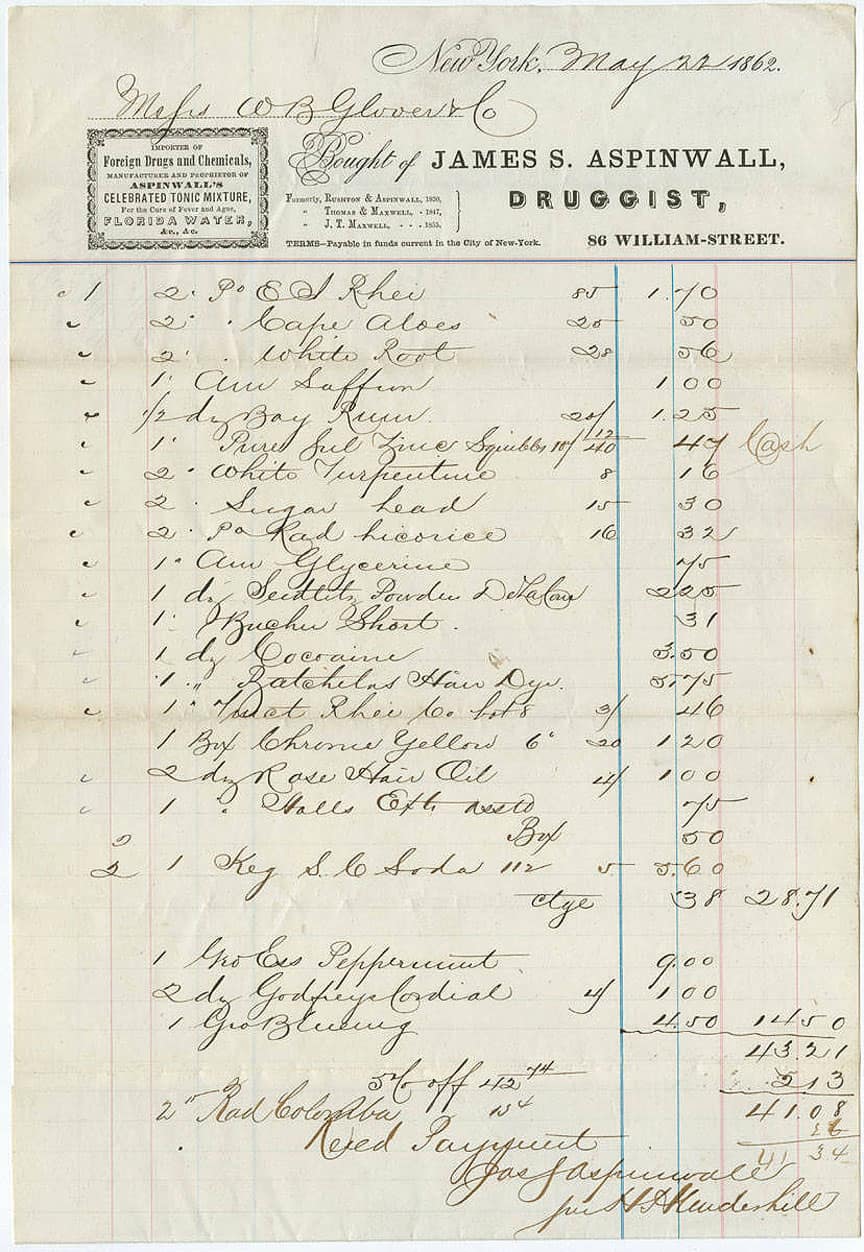 Ferdinand Meyer V is a native of Baltimore, Maryland and has a BFA in Fine Art and Graphic Design from the Kansas City Art Institute and School of Design. Ferdinand is the founding Principal of FMG Design, a nationally recognized design consultation firm. Ferdinand is a passionate collector of American historical glass specializing in bitters bottles, color runs and related classic figural bottles. He is married to Elizabeth Jane Meyer and lives in Houston, Texas with their daughter and three wonderful grandchildren. The Meyers are also very involved in Quarter Horses, antiques and early United States postage stamps. Ferdinand is the past 6-year President of the Federation of Historical Bottle Collectors and is one of the founding members of the FOHBC Virtual Museum.
View all posts by Ferdinand Meyer V →
This entry was posted in Advertising, Auction News, Druggist & Drugstore, Early American Glass, Medicines & Cures, Utility Bottles and tagged Aspinwall, auction, chlorine, Compound, Druggist & Drugstore, Fuss, Heckler, Keene, low, Medicine, New York, Reed, Rushton, Sandor, Stoddard, Tod von Mechow, tooth wash, William, Willington. Bookmark the permalink.