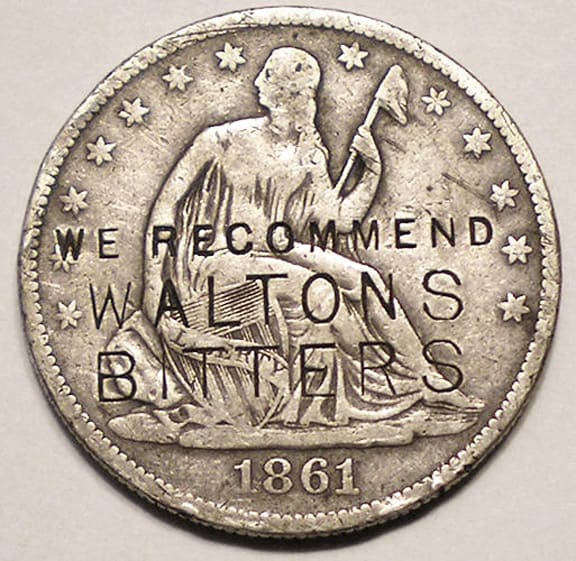 Frank Wicker (bottlepickers.com) alerted me to an interesting counterstamped coin on ebay for Waton’s Bitters. This looks to be for W 22, Walton’s Bitters from Cincinnati, Ohio in the Carlyn Ring and W. C. Ham Bitters Bottles book. The Rulau United States Tokens catalog (see picture below) lists the piece as OH-CI-169. Looks like Cincinnati, Ohio here too. 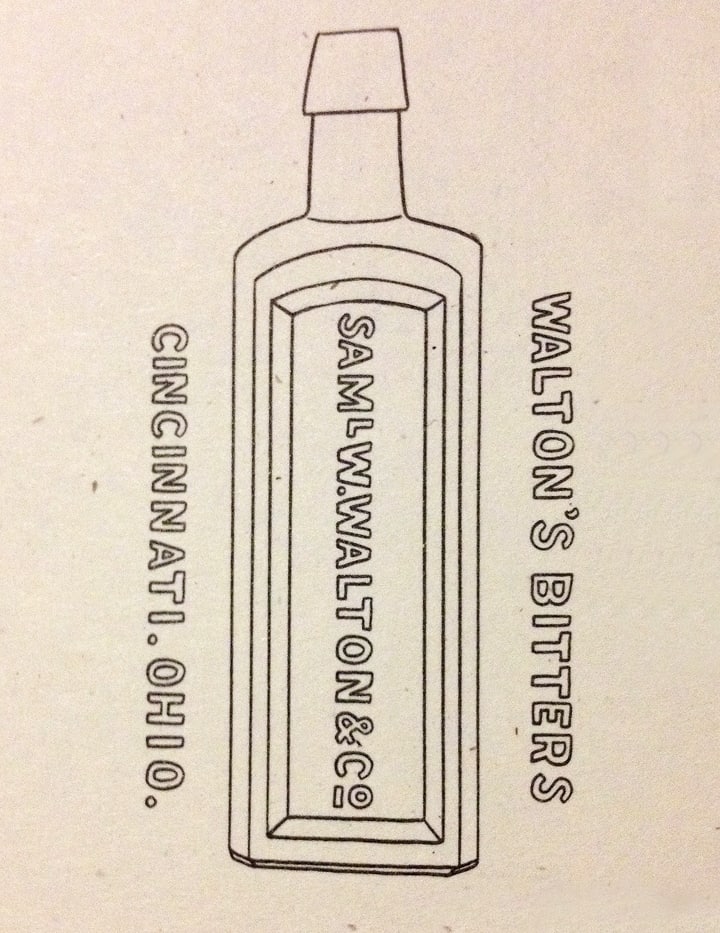 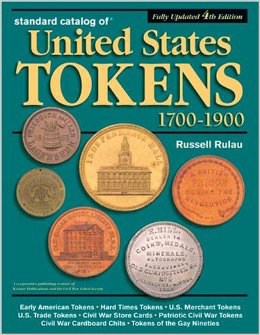 The bottle is listed as extremely rare and not present in my collection. I do have a letterhead though for review. I also have an advertisement from Knoxville, Tennessee mentioning Walton’s Bitters. Must be the same. The ebay listing is as follows:

A Silver U.S. Seated Liberty Half Dollar dated 1861-P with a counterstamp “WE RECOMMEND WALTONS BITTERS”. This contemporary Counterstamp is listed in Rulau U.S. Token catalog as OH-CI-169 and in Gould’s catalog as Gould-43. Coin is in F-VF condition with scratches on the reverse. Many of these counterstamped pieces do have this type of damage and fortunately this piece does not have scratches on the side with the counterstamp!!! Rulau notes that these “bitters” were actually flavored alcohol sold at bitters to avoid the the tax that is normally added to alcoholic beverages! It was a very popular “medicine”!!! mwclarkoldstuff (100% positive) See Listing

Samuel W. Walton had a relatively short run in Cincinnati, Ohio as a distiller and dealer of wines and liquors. He first shows up at Prince & Walton selling Scandinavian Remedies and other spirits in 1866. This lasts until 1871 when he takes over and becomes Samuel W. Walton & Co. This lasts until 1874. During this period he was represented in Texas by W .P. Lovett and in Tennessee by E. J. Sanford & Co. Judging from the letterhead and advertisement, it seems as though Walton’s Bitters and Sam Walton Beech Run Bourbon Whiskey may have been their biggest brands. 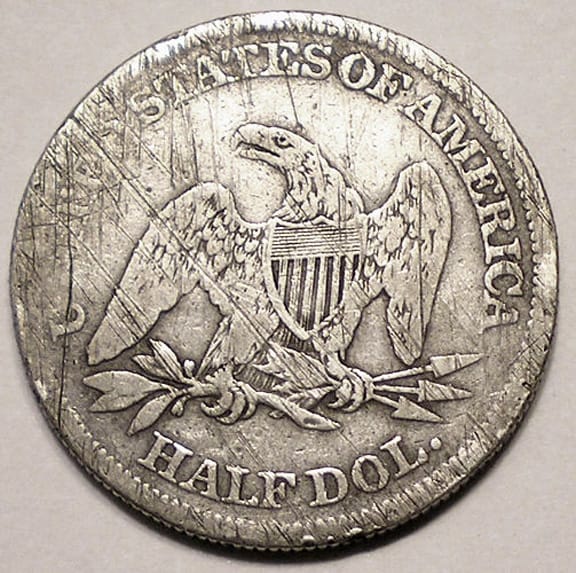 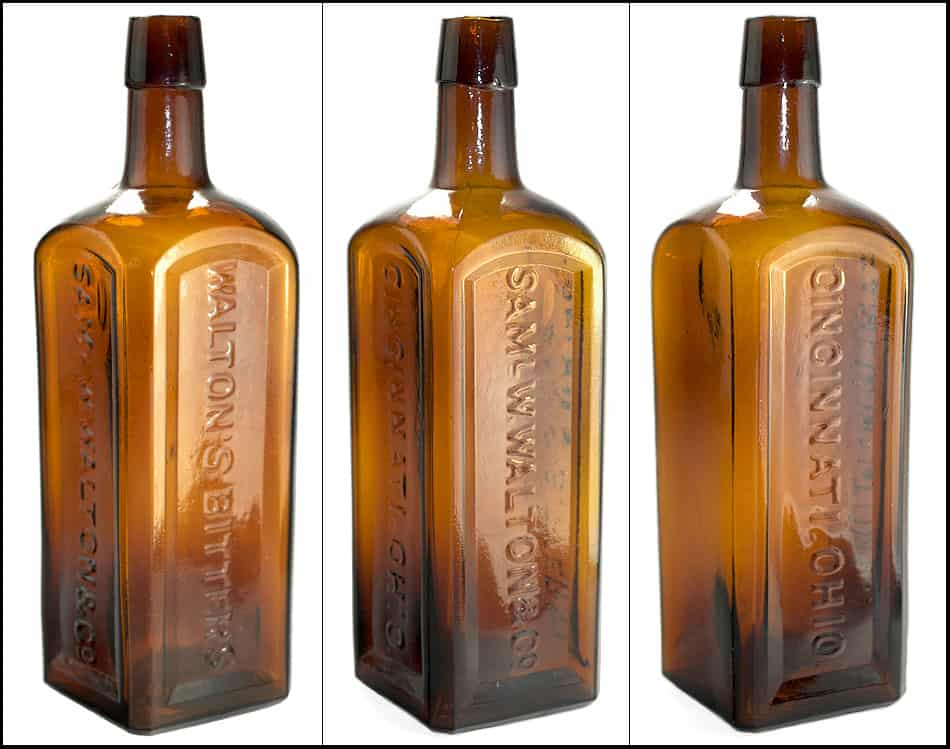 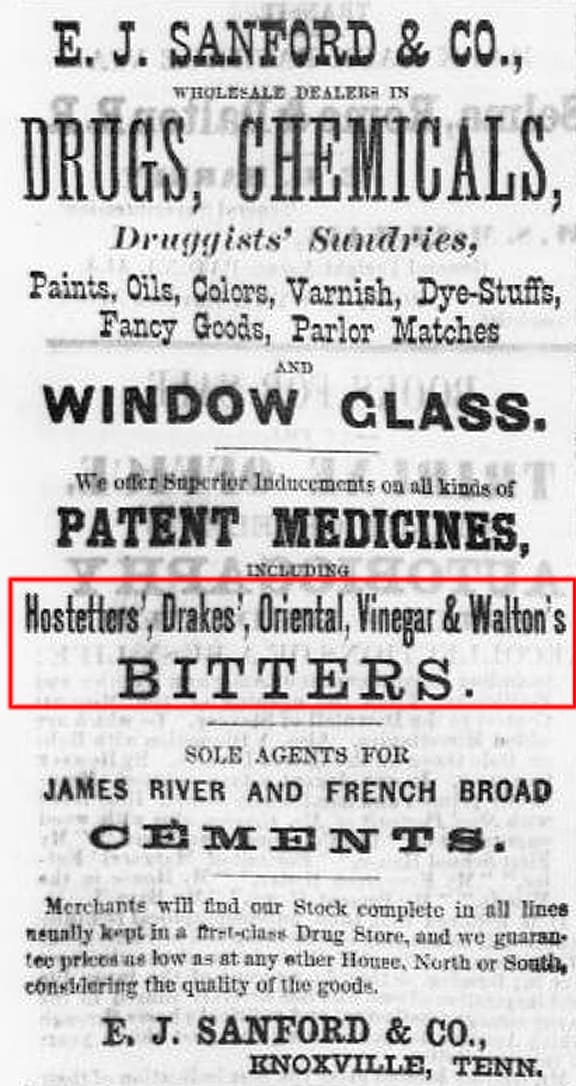 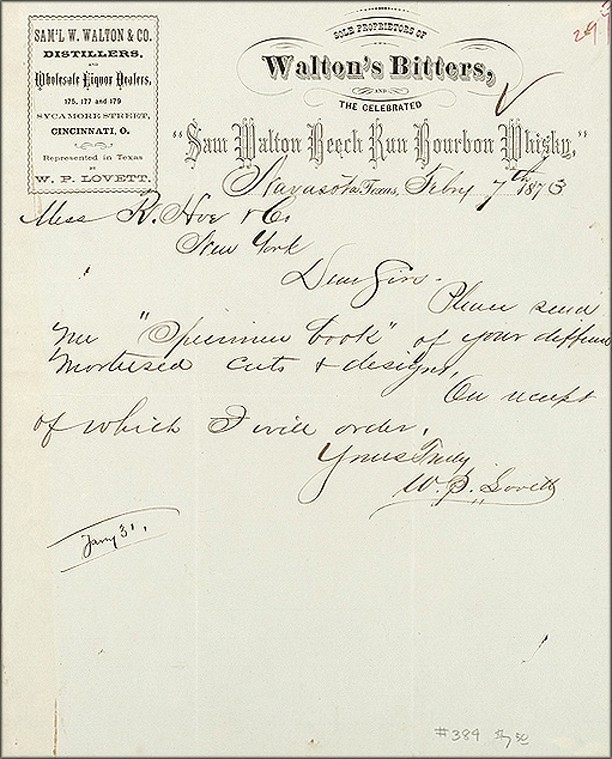 Ferdinand Meyer V is a native of Baltimore, Maryland and has a BFA in Fine Art and Graphic Design from the Kansas City Art Institute and School of Design. Ferdinand is the founding Principal of FMG Design, a nationally recognized design consultation firm. Ferdinand is a passionate collector of American historical glass specializing in bitters bottles, color runs and related classic figural bottles. He is married to Elizabeth Jane Meyer and lives in Houston, Texas with their daughter and three wonderful grandchildren. The Meyers are also very involved in Quarter Horses, antiques and early United States postage stamps. Ferdinand is the past 6-year President of the Federation of Historical Bottle Collectors and is one of the founding members of the FOHBC Virtual Museum.
View all posts by Ferdinand Meyer V →
This entry was posted in Advertising, Bitters, Bourbon, Currency, eBay, Ephemera, History, Liquor Merchant, Spirits, Whiskey and tagged bitters, Cincinnati, coin, counterstamped, Distiller, dollar, eBay, Liberty, liquor, Lovett, Meyer, ohio, Prince, recommend, Rulau, Samuel, sanford, seated, Sycamore, token, Walton, Whiskey, wholesale, wicker, Wine. Bookmark the permalink.