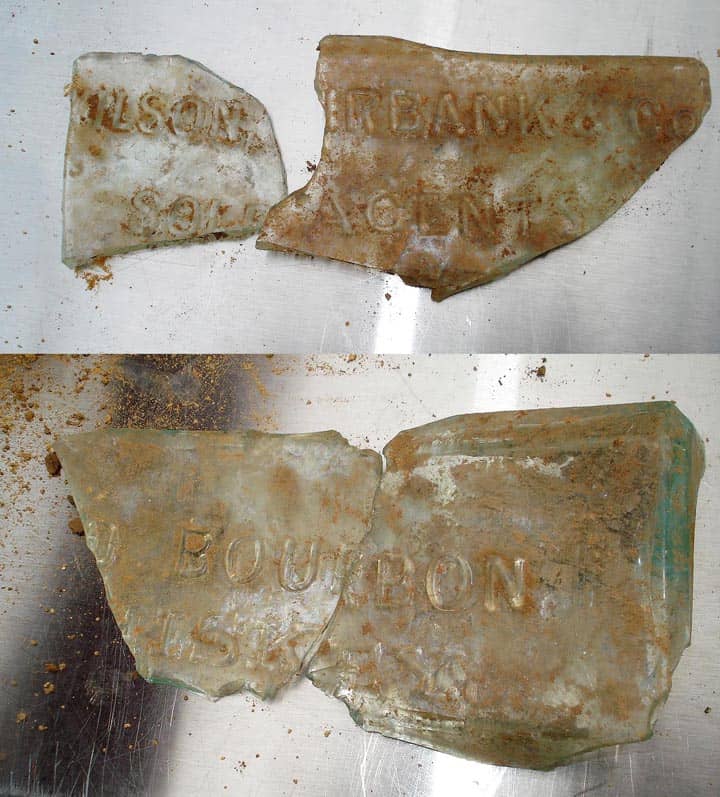 There is a wonderful bottle on ebay now reading “Monk’s Old Bourbon Whiskey Put Up By Wilson, Fairbank & Co. Sole Agents For Medicinal Purposes”. Somewhere, I have seen this bottle before and I bet it was at a past 49er Bottle Club Show in Auburn, California. The bottle shards above are from Western Bitters News which is interesting. This looks to be an eastern bottle. What was it doing out west? The ebay listing with a cropped picture below reads:

Here is a killer and extremely rare Monk’s Old Bourbon Whiskey bottle. I believe it to be a bitters bottle. Nice graphite pontil and some nice whittling. This bottle has no condition issues whatsoever other than being a little dusty inside !!!!!  Measures approx. 9 3/4″ tall and 3″ square. Don’t miss an opportunity like this !!!!  This would be the highlight of any bottle collection !!!!!! hoffa 1 (100% Positive feedback) See ebay listing 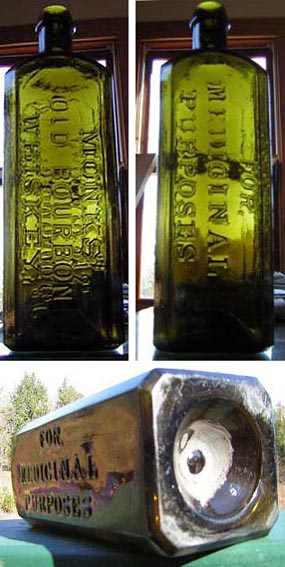 A bitters bottle eh? A ‘medicine’ for sure because it says, “For Medicinal Purposes”, there you go. Apparently, there is a pint version that has the word, “Monk’s” slugged out. Rumor has it that New England collector, Jack Pelletier has a labeled example. I hope see him in Baltimore this weekend and I will ask him.

I found two advertisements dating the Old Bourbon Whiskey brand to 1857 or so in the Rockland County Messenger and Cambridge Chronicle (see below). Wilson, Fairbank & Company (John Wilson, Jr. and  Franklin Dexter Fairbanks then George Edward Fairbanks) were wholesale druggists located at Nos. 43 and 45 Hanover Street in Boston, Massachusetts. The firm originated in 1849 or so from humble beginnings and within ten years, they became the largest and most prominent druggist in Boston. Their medicinal whiskey and other products such as assorted drugs, chemicals, patent medicines, glass ware, shakers’ herbs, fluid extracts, medicine chests, cigars, tobacco, and the purest of liquors, of their own importation (for medicinal purposes they said) were sold in New York and other parts of the country according to the advertisements below. It looks as though the bottle comes in green and aqua colorations. 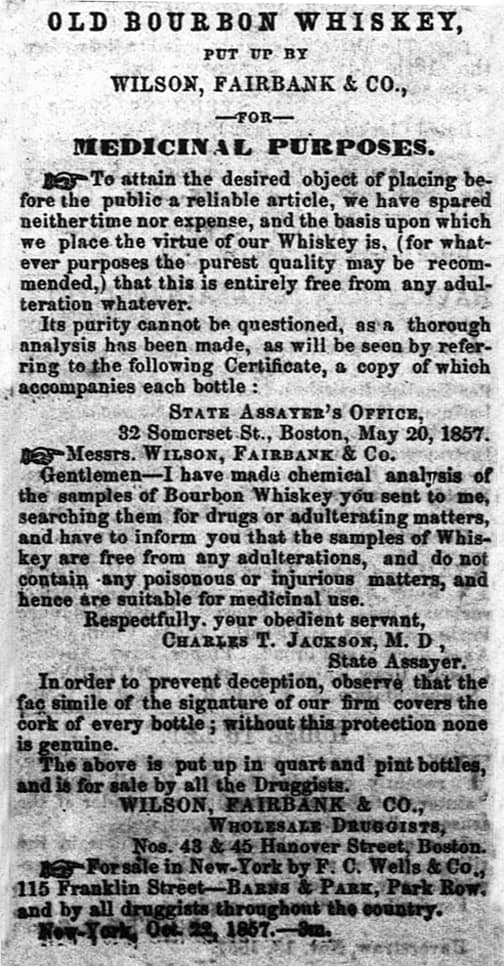 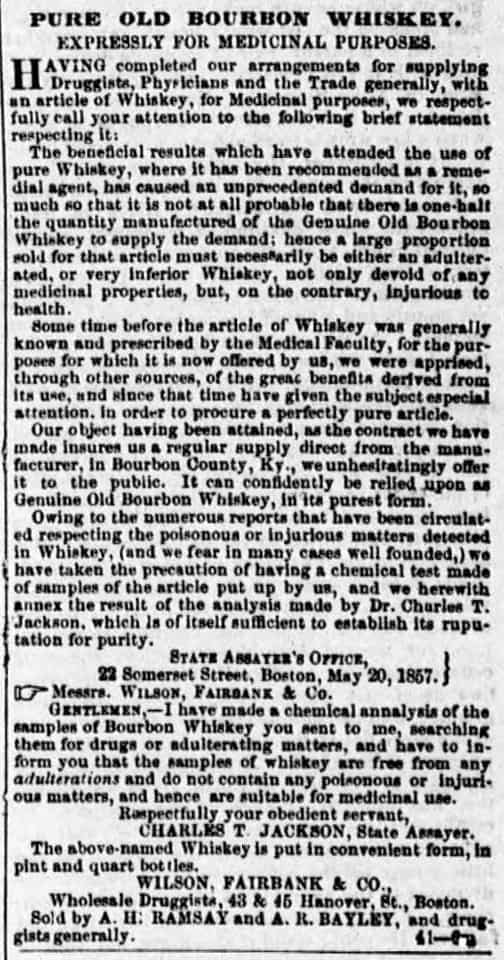 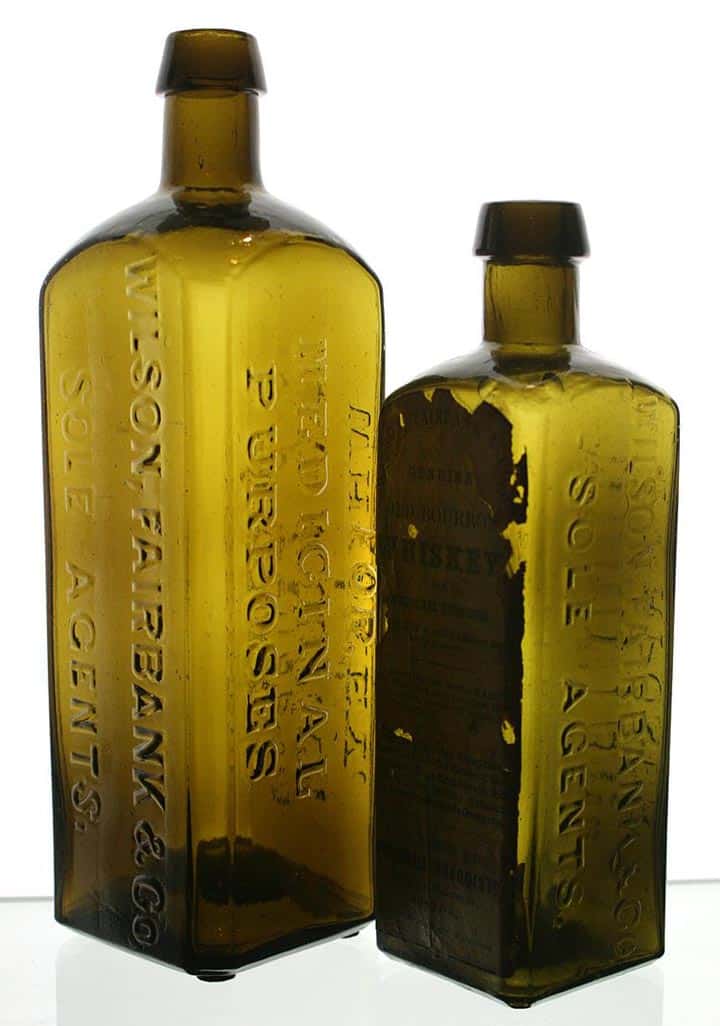 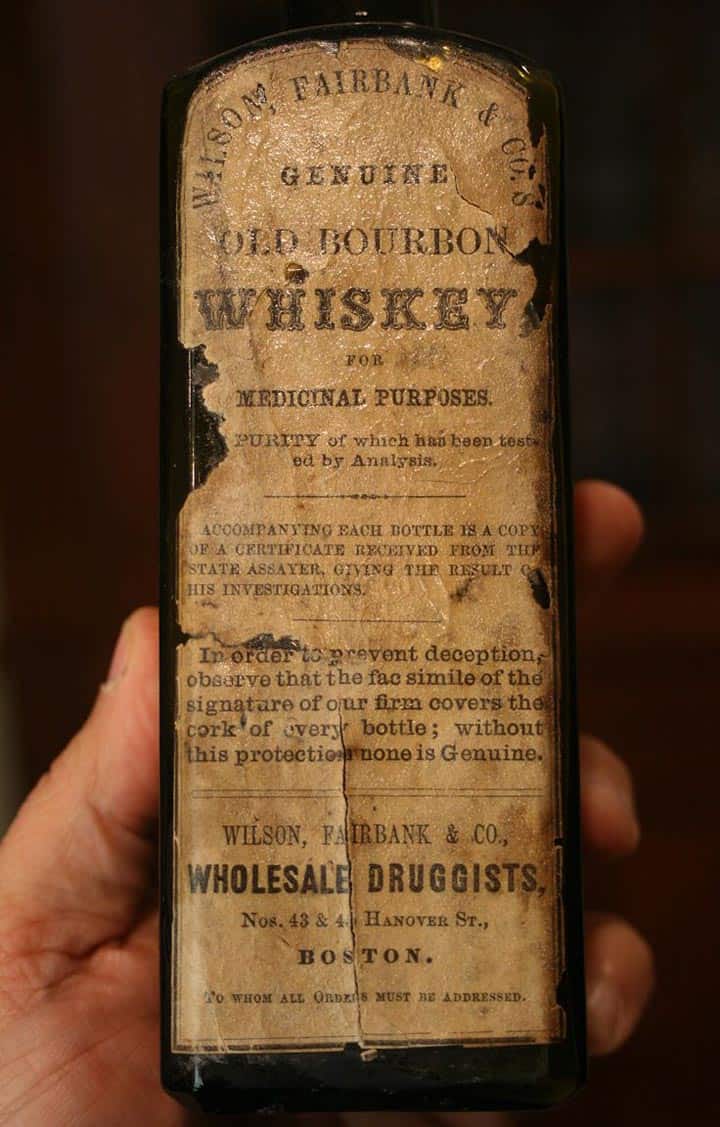 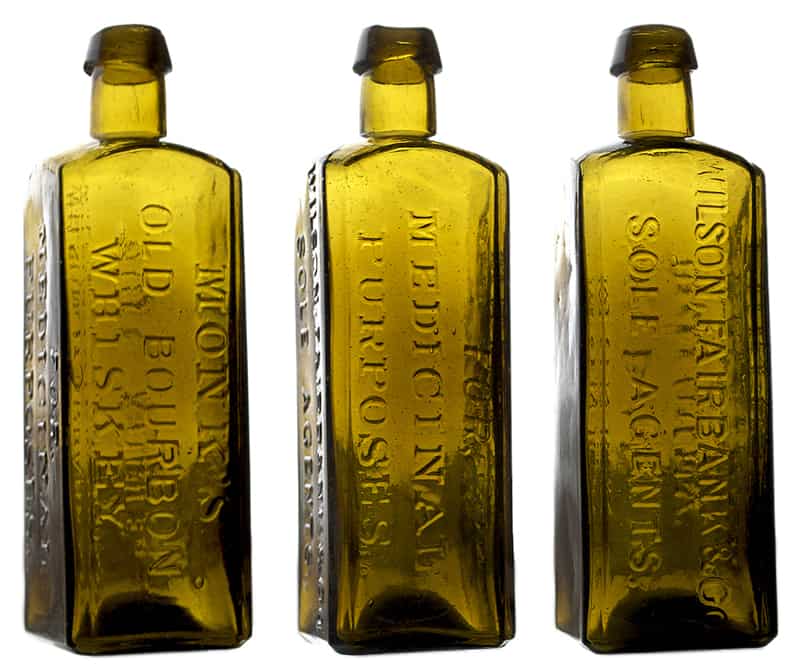 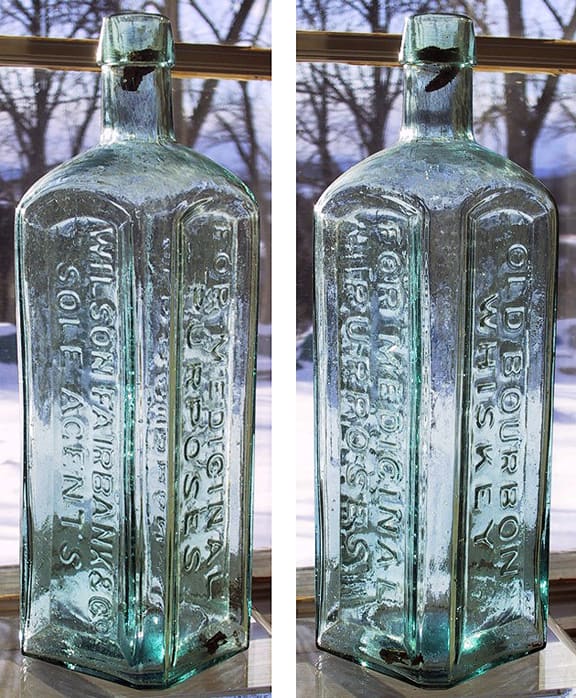 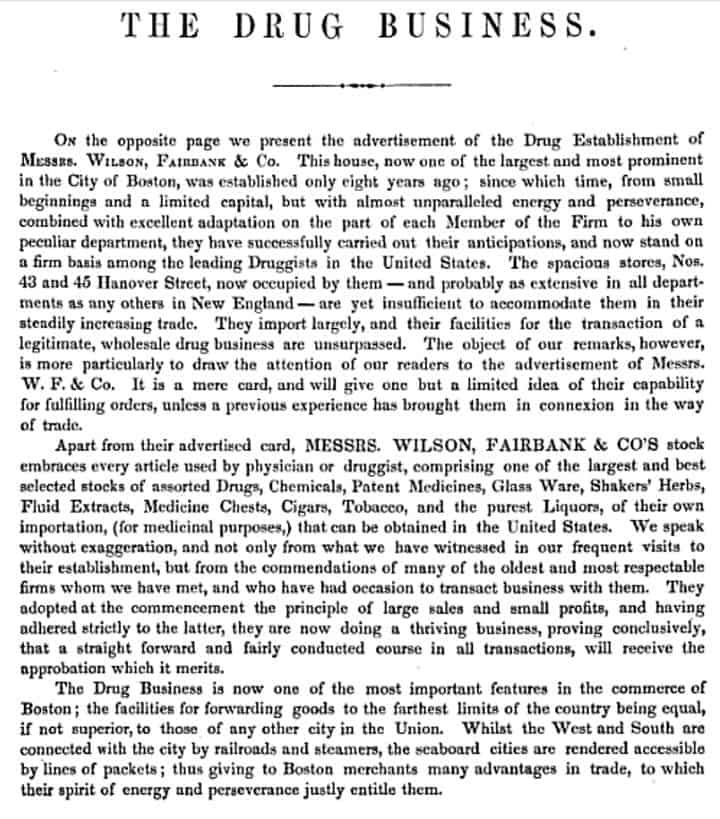 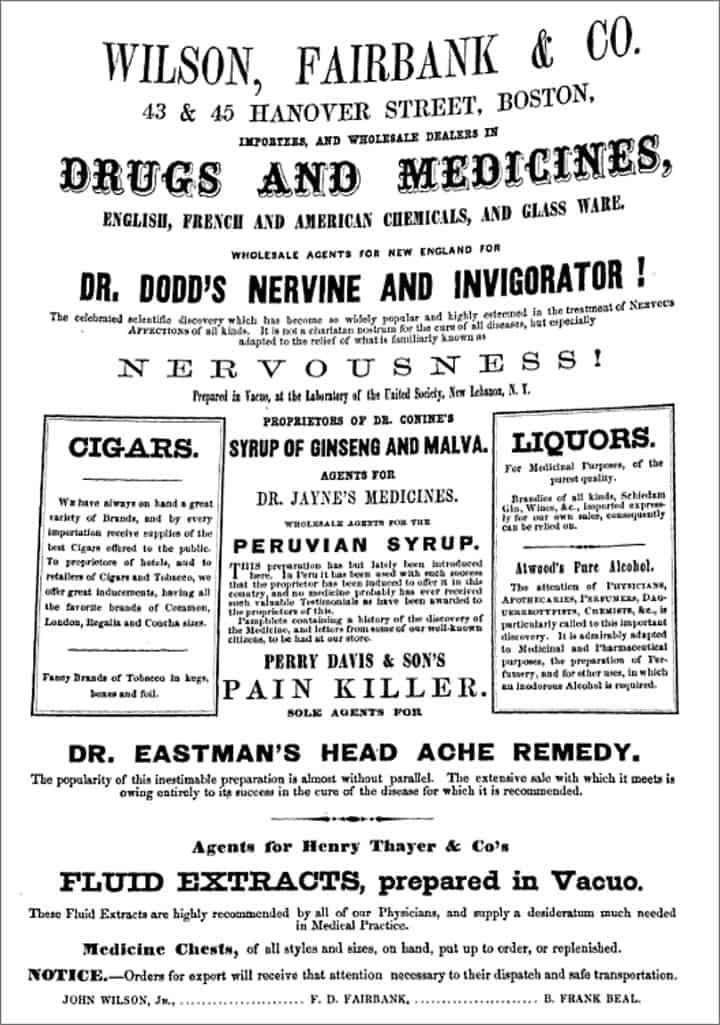 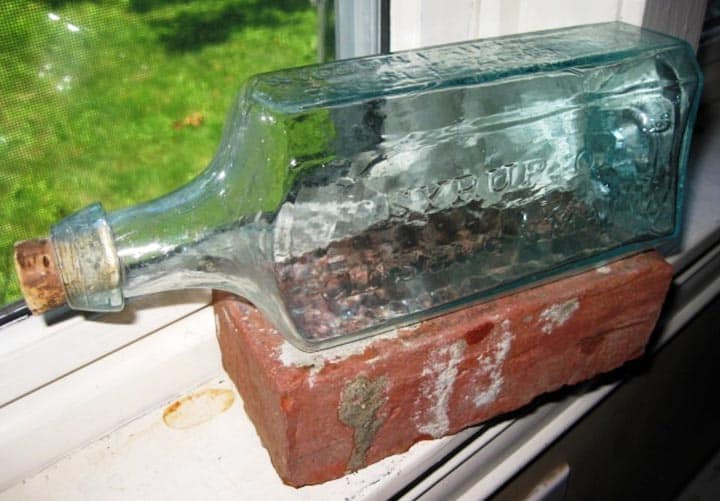 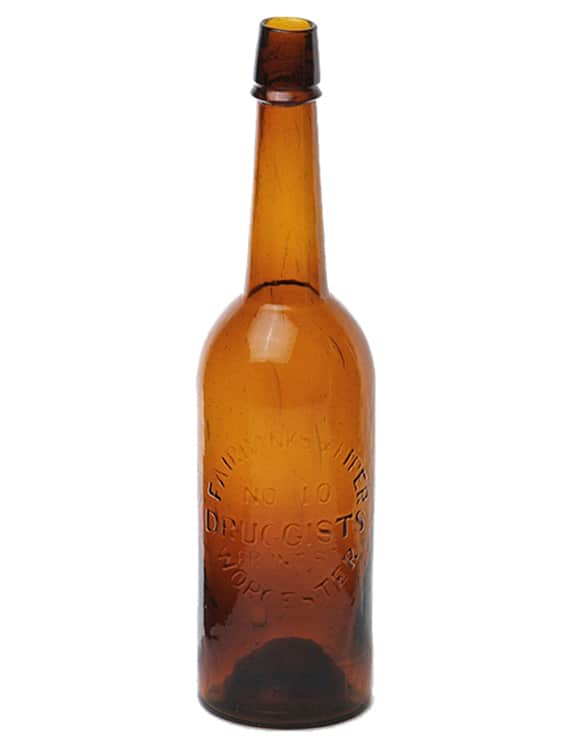 “FAIRBANKS & PIPER / NO 10 / DRUGGISTS / FRONT ST / WORCESTER” Whiskey Fifth, America, 1865 – 1870. Bright golden amber shading to a rich reddish-orange near the base, cylindrical, applied sloping collar with bevel – smooth base, ht. 11 7/8″, perfect! A beautiful and extremely rare eastern whiskey fifth. Much more difficult to find than the Geo. Fairbanks, or Wilson, Fairbanks & Co, this example is in pristine condition, with outstanding character, bubbly, whittled, and having great eye-appeal. Note; Fairbanks & Piper were listed as Agents in the 1869 Directory. – American Glass Gallery | Auction #22

1857: Advertisement (above in post) The Drug Business – Wilson Fairbank & Co. – History of Prominent Mercantile and Manufacturing Firms in the United States, 1857 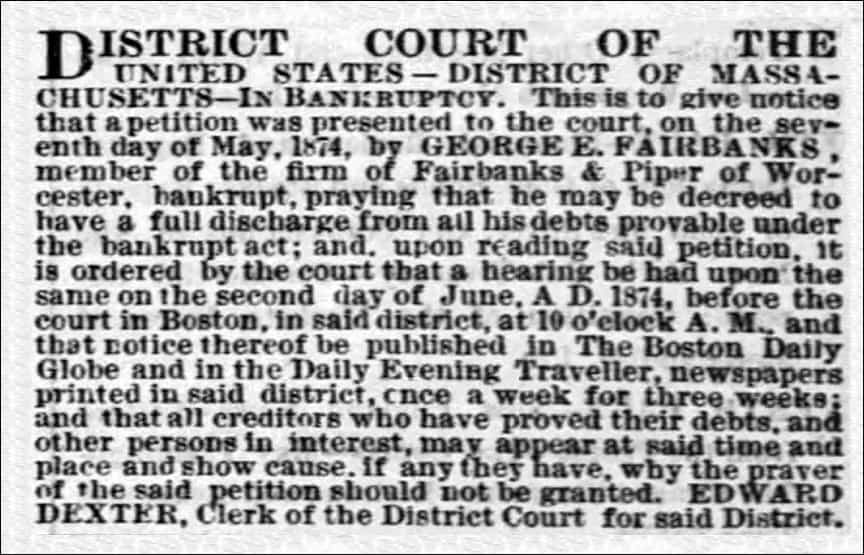 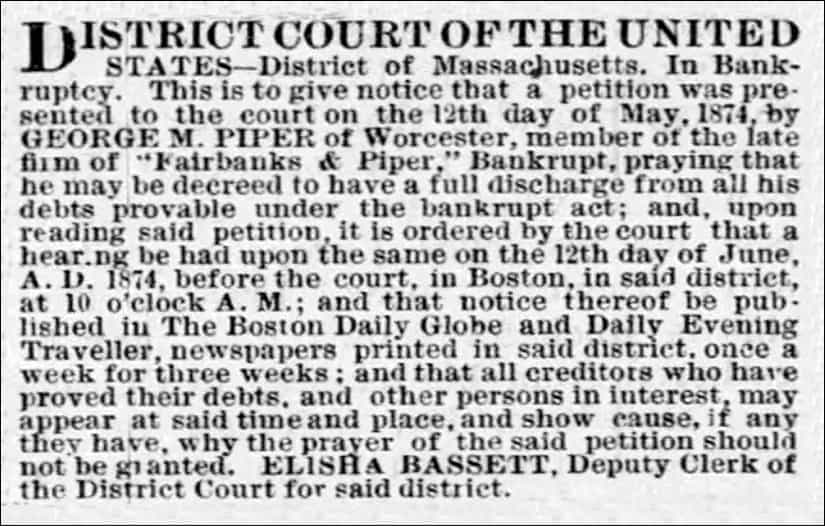 Ferdinand Meyer V is a native of Baltimore, Maryland and has a BFA in Fine Art and Graphic Design from the Kansas City Art Institute and School of Design. Ferdinand is the founding Principal of FMG Design, a nationally recognized design consultation firm. Ferdinand is a passionate collector of American historical glass specializing in bitters bottles, color runs and related classic figural bottles. He is married to Elizabeth Jane Meyer and lives in Houston, Texas with their daughter and three wonderful grandchildren. The Meyers are also very involved in Quarter Horses, antiques and early United States postage stamps. Ferdinand is the past 6-year President of the Federation of Historical Bottle Collectors and is one of the founding members of the FOHBC Virtual Museum.
View all posts by Ferdinand Meyer V →
This entry was posted in Advertising, Bitters, Bourbon, Digging and Finding, Druggist & Drugstore, eBay, History, Medicines & Cures, Questions, Syrup, Whiskey and tagged Boston, Bourbon, eBay, Fairbank, George, Hanover, Massachusetts, medicinal, Monk, New York, Noordsy, Pelletier, Syrup, Whiskey, Wilson. Bookmark the permalink.