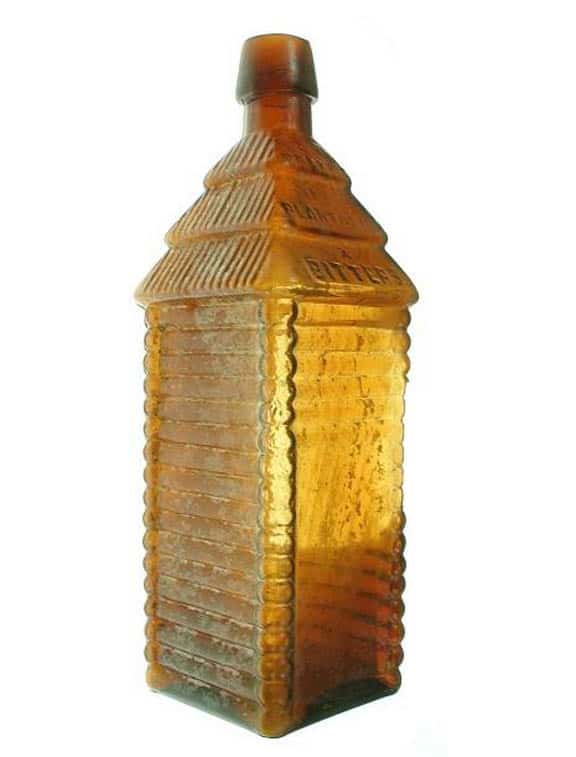 In early 1862, just months after the American Civil War erupted, people predicted the hard times and shortages looming ahead and began hoarding resources, coins included. Many millions of dollars in gold and silver coins and even copper-nickel cents disappeared from the market as a result of this hoarding. Coins consequently commanded a premium over paper money.

The U.S. Mint soon coined copper-nickel cents almost exclusively, but demand exceeded supply. A resourceful public then used postage stamps as currency for small obligations, a situation that forced shopkeepers to accept stamps as change. Envelopes stating the amount of stamps contained within and cards bearing stamps were sometimes used to keep the stamps from sticking and being destroyed, and printers sold advertisements on large numbers of these envelopes. The government authorized the monetizing of postage stamps by July 1862 and soon began printing stamp impressions on bank note paper.
On August 12, 1862, John Gault received a patent for his ‘Design for Encasing Government Stamps’—that is, a design for encasing stamps for use as currency. Gault’s plans called for the corners of a postage stamp to be wrapped around a cardboard circle. A thin, transparent piece of mica covered the stamp, and an outer metal frame held these items secure. A heavier brass backing, suitable for advertising purposes, completed the piece. The size of a quarter but much lighter in weight, the object encased stamps from the 1861 issue-the 1-cent, 3-cent, 5-cent, 10-cent, 12-cent, 24-cent, 30-cent, and 90-cent. Gault sold his encased postage at a small markup over the value of the enclosed stamp and the cost of production.

Gault’s enterprise ended on August 21, 1862, when the government issued postage currency in 5-cent, 10-cent, 25-cent, and 50-cent denominations. The government issued fractional currency the next year. Increased production of brass and copper-nickel coinage in 1863 also undermined Gault. Still, encased postage proved very popular because it solved the major problems of stamp damage and the necessity of opening stamp envelopes to count the contents. At least thirty companies took advantage of the advertising possibilities with ads stamped on the brass backing. Perhaps $50,000 or a little more in encased postage eventually was sold and circulated, not nearly enough by itself to solve the nation’s small change crisis. Of the approximately 750,000 pieces sold, only 3,500-7,000 are believed to have survived. 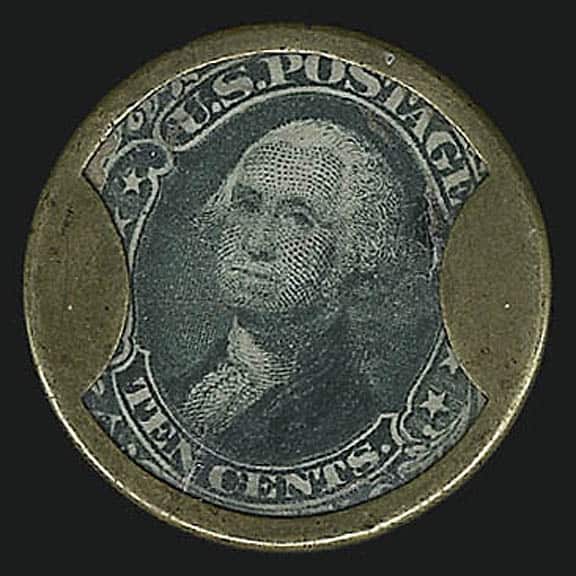 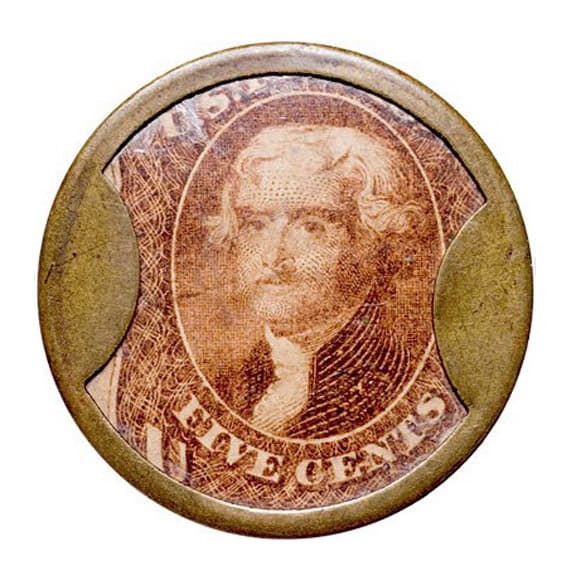 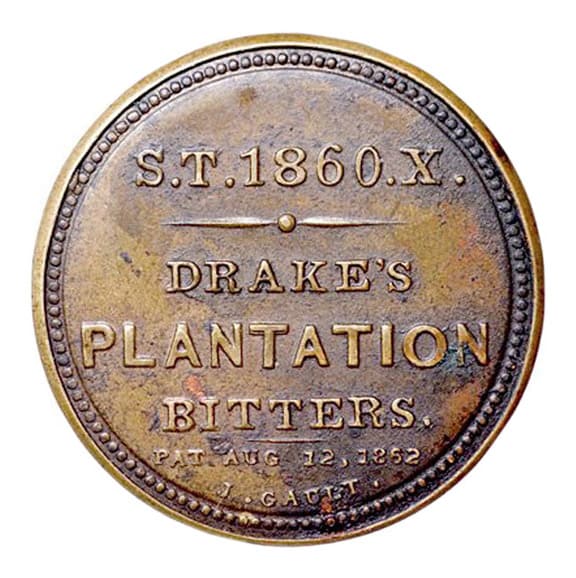 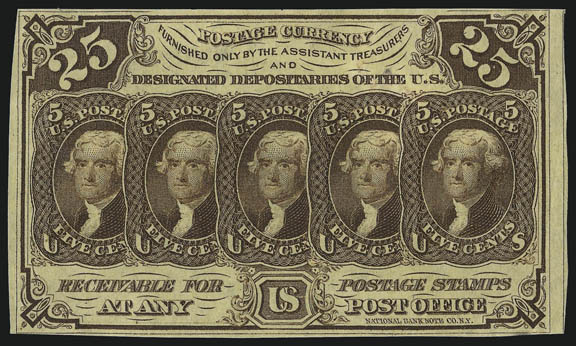 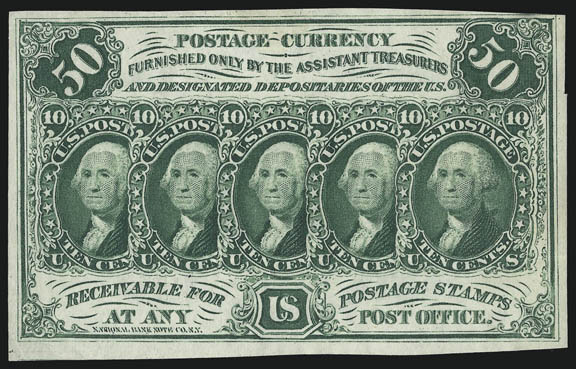 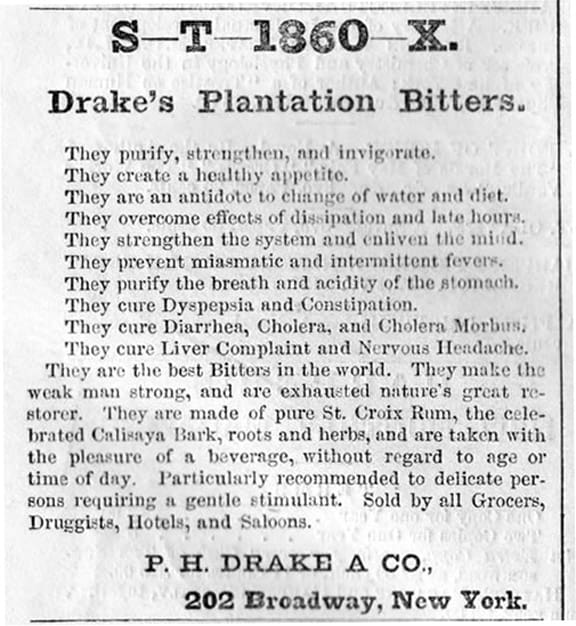 Ferdinand Meyer V is a native of Baltimore, Maryland and has a BFA in Fine Art and Graphic Design from the Kansas City Art Institute and School of Design. Ferdinand is the founding Principal of FMG Design, a nationally recognized design consultation firm. Ferdinand is a passionate collector of American historical glass specializing in bitters bottles, color runs and related classic figural bottles. He is married to Elizabeth Jane Meyer and lives in Houston, Texas with their daughter and three wonderful grandchildren. The Meyers are also very involved in Quarter Horses, antiques and early United States postage stamps. Ferdinand is the past 6-year President of the Federation of Historical Bottle Collectors and is one of the founding members of the FOHBC Virtual Museum.
View all posts by Ferdinand Meyer V →
This entry was posted in Advertising, Bitters, Civil War, Ephemera, Figural Bottles, History, Postage, Tax Stamps and tagged Arago, bitters, Drakes, Encased Postage, James E. Kloetzel, John Gault, Plantation, US Mint. Bookmark the permalink.