The Honorable Stephen Buhrer and his Gentian Bitters 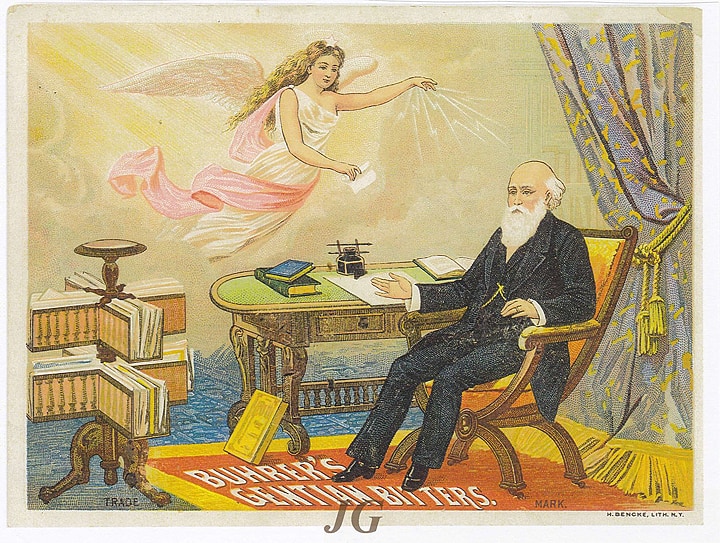 Buhrer’s Gentian Bitters trade card from the extraordinary collection of John Kemler – image Joe Gourd. The man in the chair is most likely the Honorable Stephen Buhrer.

The Honorable Stephen Buhrer and his Gentian Bitters 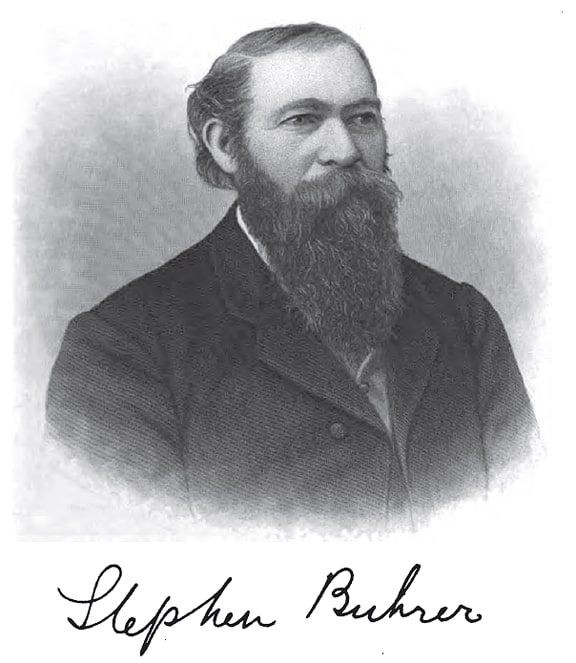 As the trade card above and his advertising depicts, Stephen Buhrer was truly and honorable man, he worked hard and was blessed from above. He also put out Buhrer’s Gentian Bitters. I have three of his bottles in my collection that tell a story.

Stephen Buhrer was born on Christmas day, December 25th, 1825 on the Zoar farm in Tuscarawas County, Ohio to Johann Casper Buhrer who was from a province of Baden, Germany and Anna Maria Miller from Stockach, Germany. Johann and Anna Maria arrived in Philadelphia, with many other Germans, in 1817, and settled in Greensburg, Pennsylvania. They were married in short order and had one daughter, Catherine. Knowing of many other Germans and Anna Maria having friends in Ohio, the Buhrer’s moved to the rich farmlands of Zoar, Ohio.

Zoar was formed by a group of German Separatists who left southeastern Germany to escape persecution for their religious beliefs. The Separatists thought that the church should be simple and bereft of all ceremony and they emphasized a mystical and direct relationship with God. Zoar was one of the most notable experiments in communal living in our nation’s history.

Unfortunately, Buhrer’s father died in 1829 and Buhrer was entrusted to this strict German society of separatists. At a very early age, and without a wage, Buhrer was put to work on the communal farm and at the age of nine was given the task to manage the sheep in the vast pasture ranges of Zoar where he labored for three years. When he was twelve years old, he was placed in a cooper shop in the society. A cooper was someone who made wooden staved vessels, bound together with hoops and possessing flat ends or heads.

Buhrer did not attend traditional school and was educated mainly in Sunday school and by any education he could pick up after a long days work. Buhrer not only learned the trade of coopering, but at different times did almost any kind of work including brewing and slaughtering. He also was a hostler at the Zoar Tavern and drove horses on the Ohio canal. Buhrer finally left the society and farm life and traveled to Cleveland in 1842 and continued work as a cooper. He accepted a position as a traveling salesman in 1846 with his territory at first covering Ohio and later Indiana and Michigan.

With ill health and the prevailing malarial fevers of this era, he cut short his work as a traveling salesman and returned by rail to Detroit. With his funds exhausted, he sold much of his valuables including clothes and purchased deck passage on a steamboat bound for Cleveland, which he regarded his new home. Continued ill health then sent him almost to the poorhouse until a friend revived his spirits and supported him financially until he recovered. With a renewed vigor, Buhrer then returned to coopering and briefly worked at a shipyard in 1847.

In 1848, Buhrer married Eva Maria Schneider and had three children: John, Mary Jane, and Lois Catherine. Eva died in 1889 and after her death, Buhrer married Marguerite Paterson. With a family and responsibilities, Buhrer put his strong work ethic to task and went into the coopering business for three years. He then sold his interest to his partner in 1853, at which time he turned his attention to the business of rectifying and purifying spirits. During this period, he was associated with the Masons and Cleveland City Lodge No. 15. He was also First Junior Deacon of Bigelow Lodge No. 243.

Buhrer eventually became a well-known wholesale distributor of alcoholic beverages and ran Eagle Distilleries. He had only been a resident of Cleveland for eleven years, and was only 29 years old when he was elected a member of the City Council in 1855. He also ran and served on the City Council in 1863 and 1865. He served on the council during the Civil War, as he could not be drafted because of his health, and was a stalwart champion of the Union and Federal government. After his three-terms with the city council, Buhrer was elected mayor of Cleveland in 1867. He served as the Democratic Mayor until 1870.

Buhrer’s Gentian Bitters first appeared around 1865 and remained one of his strongest brands well into the 1880’s. Along with foreign and domestic liquors, he also sold and bottled mineral and other natural table waters. Buhrer was one of the prominent business men of his day and as Mayor, brought forth the project of building a viaduct to connect the east and west sides of Cleveland. The Cleveland House of Correction & Workhouse was also built under his term. After serving two terms, he returned to serve another term on the city council before he died in Cleveland on December 8, 1907. 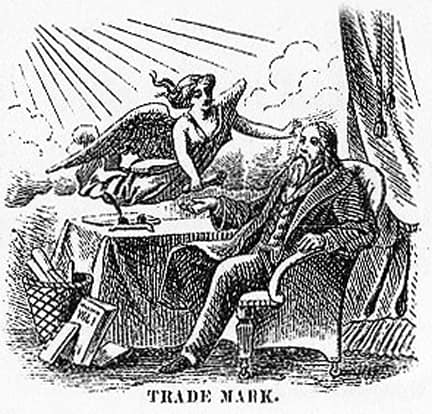 To me, it is truly amazing that this self made man, with no father or older brothers, no money to borrow from relatives, became so successful in America as such a young age. He truly must have had some type of divine intervention as his trade mark depicts. 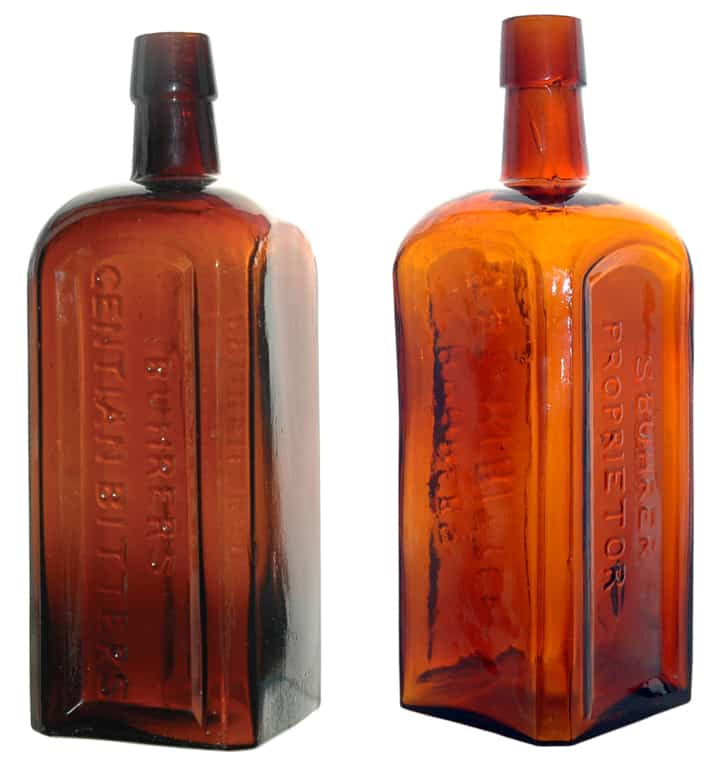 B 252: Two different examples in amber of the Buhrer’s Gentian Bitters – Meyer Collection 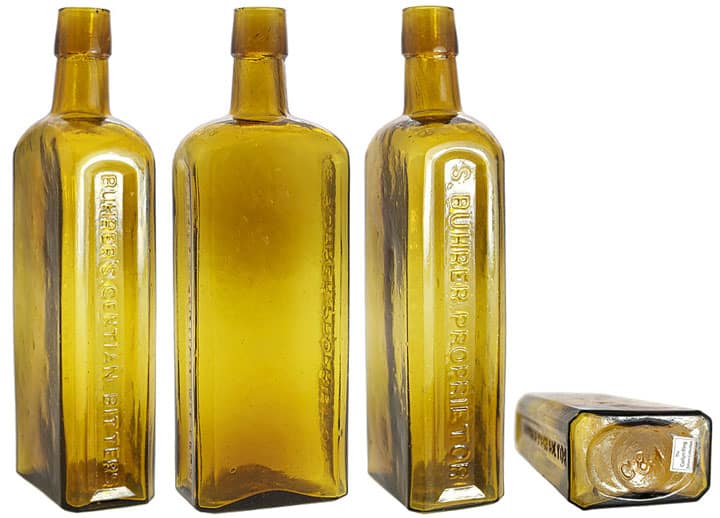 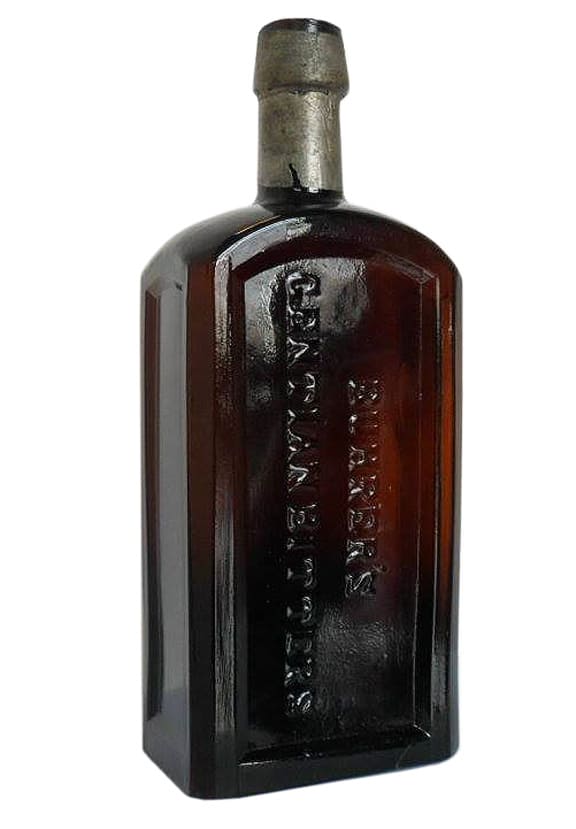 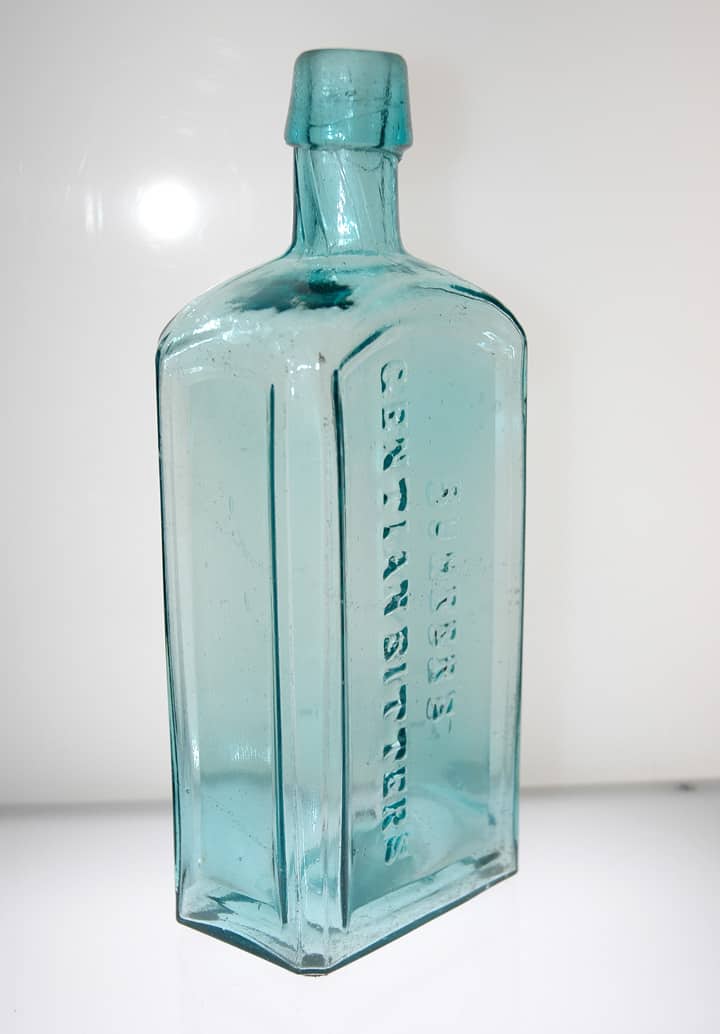 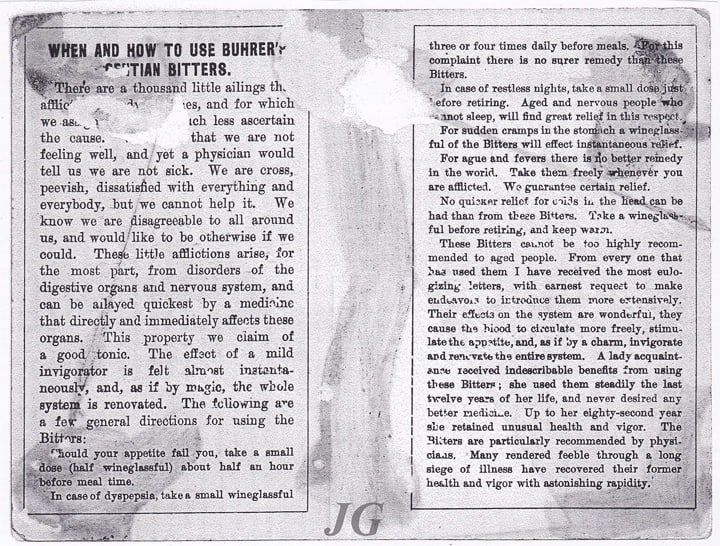 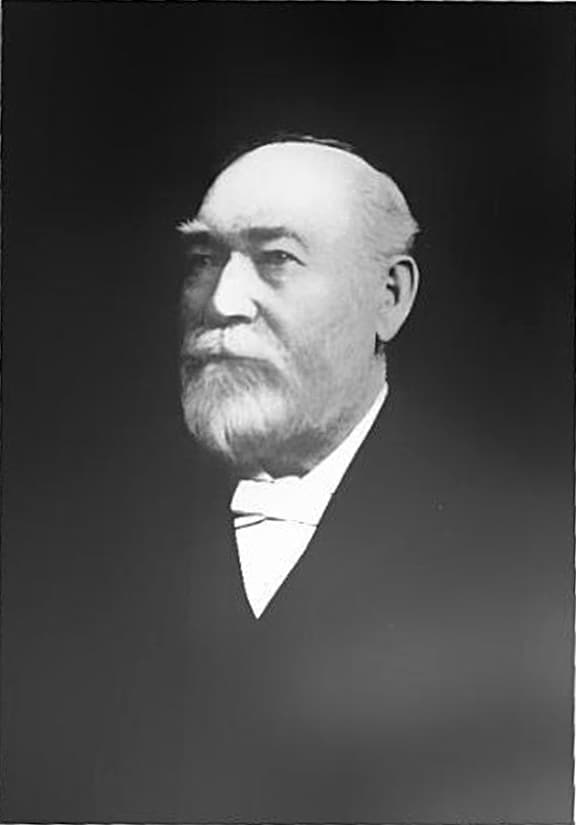 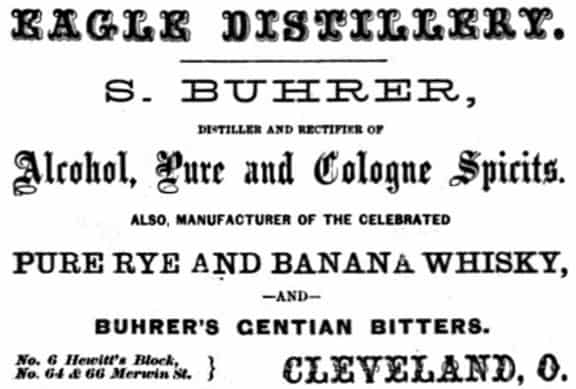 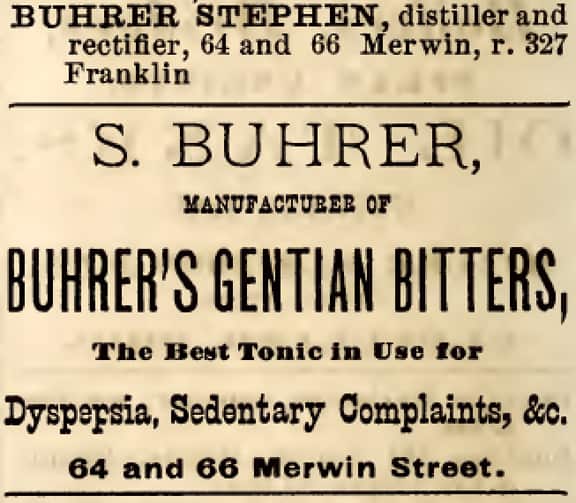 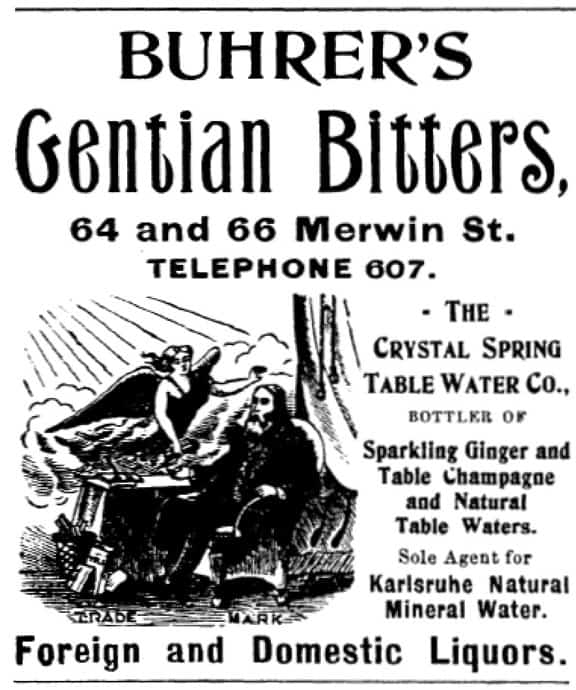 Resources: A History of Cleveland, Ohio: By Samuel Peter Orth, Wikipedia and other online sources.

Ferdinand Meyer V is a native of Baltimore, Maryland and has a BFA in Fine Art and Graphic Design from the Kansas City Art Institute and School of Design. Ferdinand is the founding Principal of FMG Design, a nationally recognized design consultation firm. Ferdinand is a passionate collector of American historical glass specializing in bitters bottles, color runs and related classic figural bottles. He is married to Elizabeth Jane Meyer and lives in Houston, Texas with their daughter and three wonderful grandchildren. The Meyers are also very involved in Quarter Horses, antiques and early United States postage stamps. Ferdinand is the past 6-year President of the Federation of Historical Bottle Collectors and is one of the founding members of the FOHBC Virtual Museum.
View all posts by Ferdinand Meyer V →
This entry was posted in Advertising, Bitters, Collectors & Collections, Ephemera, History, Liquor Merchant, Medicines & Cures, Mineral Water, Spirits, Trade Cards and tagged bitters, Buhrer, Cleveland, cooper, Gentian, Germany, Gourd, Kemler, liquor, Merwin, Meyer, Mineral, ohio, Schneider, spirits, Stephen, Tuscarawas, wicker, Zoar. Bookmark the permalink.