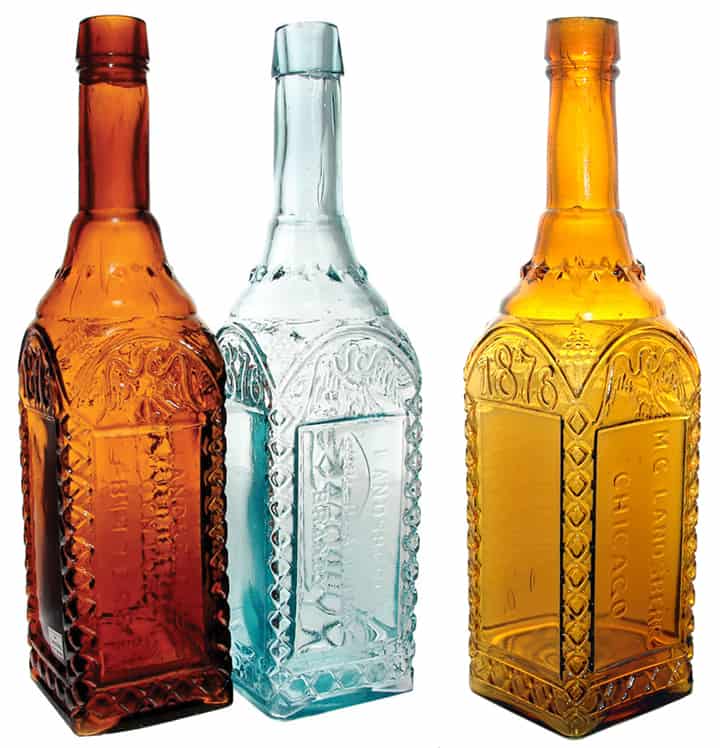 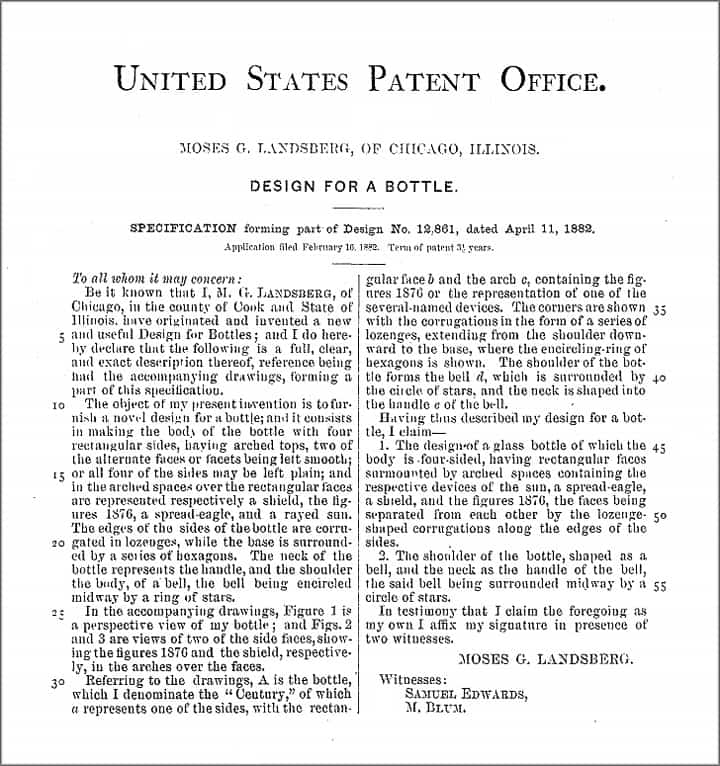 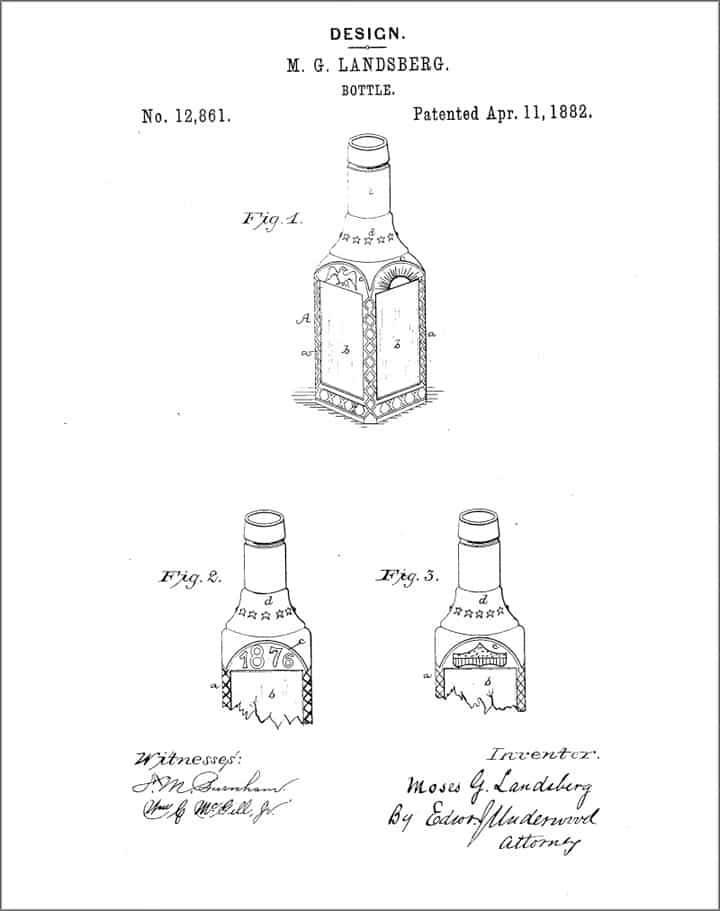 While going through my copies of bitters patents today I thought I had accidentally made two copies of the Landsberg’s patent (see Figs: 1 & 2 above) for the Century Bitters bottle (patent 12,861 – L13, L14 L15 in Bitters Bottles). They are incredible bottles so I could see where I might have wanted two copies, in case I lost one. Upon closer inspection, I noticed that one patent was submitted a year later. At first I thought it was for a subtitle design variation. I know there are Landsberg bottles from Chicago, New York and St. Louis. However, this patent was for a very different bottle design (see Figs: 3 & 4 below). 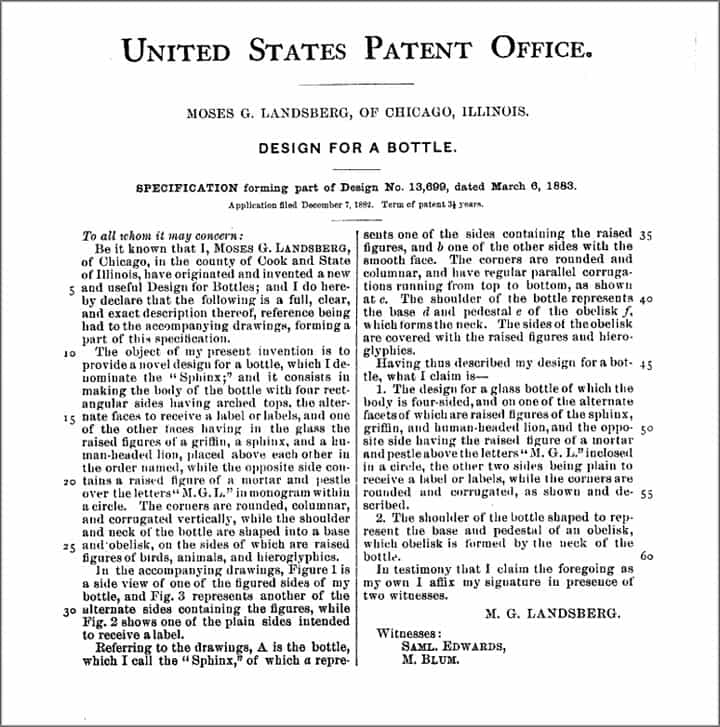 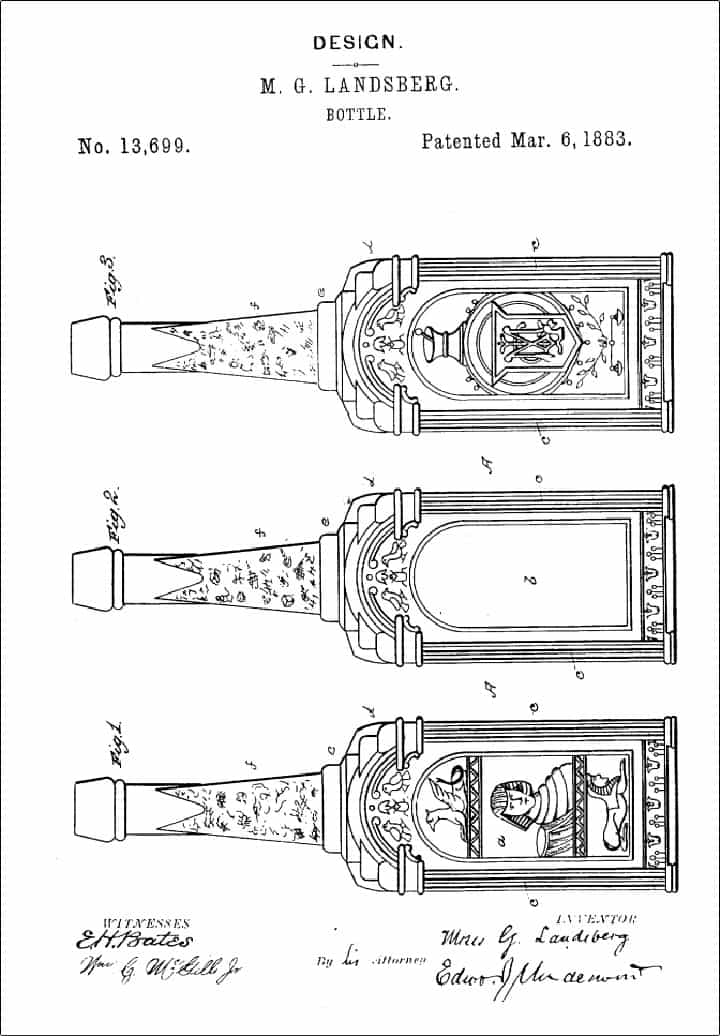 The design on this bottle is incredible. I would very much like to get my hands on one. OK, I would love to own any Landsberg bottle! But this one having a mortar and pestle would make it a good fit for my druggist bottle collection. I do not know what this bottle held. However, it being very similar to the other Landsberg bottles, I would guess bitters.

The earlier bottle, patent 12,861, has a spread eagle, rayed sun, shield, “1876”, beautiful corrugated corners and hexagons at the base (see Figs: 5 & 6 below). The neck of this bottle was meant to represent a handle and the shoulder a bell with stars on it. Truly an exceptional bottle design. 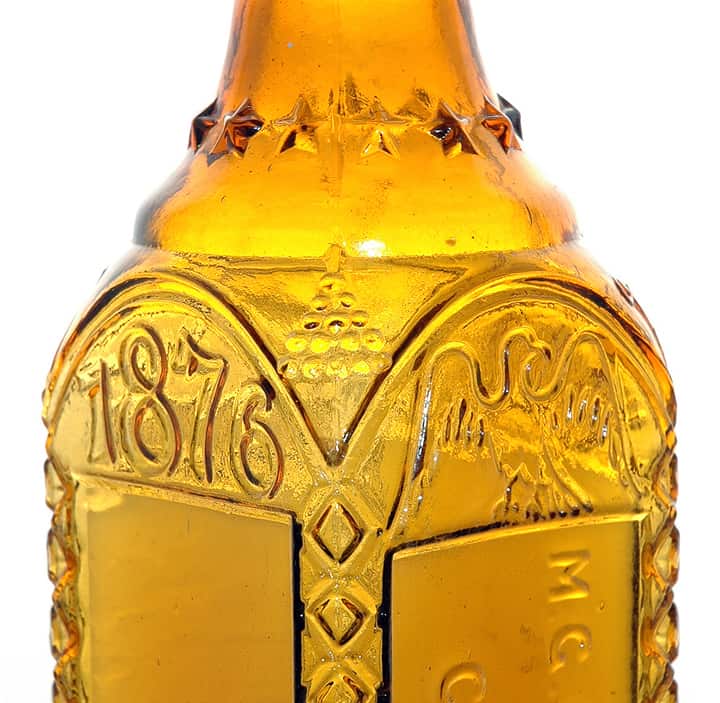 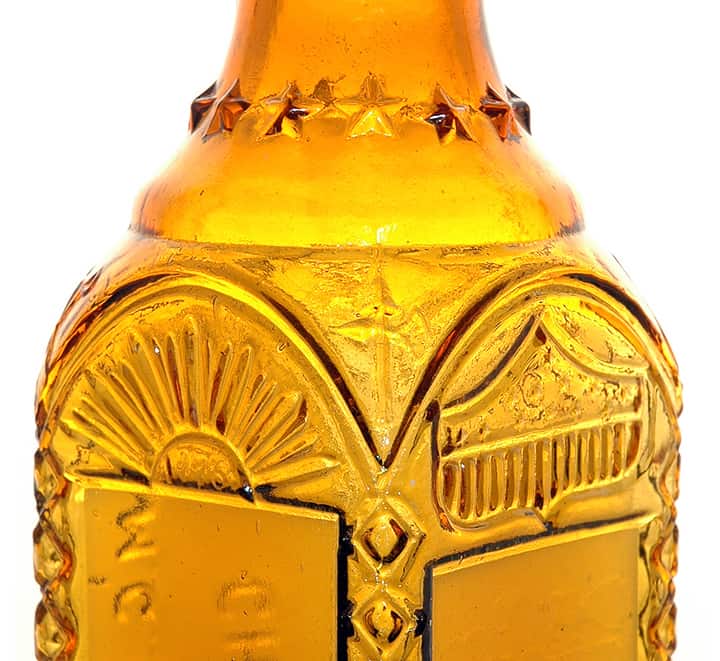 This newer bottle (patent 13,699) equally, was quite ornate, perhaps even more so. The bottle not only has a Sphinx and a mortar and pestle, it has the figure of a griffin, a human headed lion, corrugated columns at the corners, birds, animals, hieroglyphics and the “M.G.L.” monogram. The neck of the bottle is shaped into a base and obelisk. Perhaps he told the craftsman who designed the first bottle to just let his imagination run wild on the second bottle.

Quite a few of the bitters patents I have were for label only bottles. While those can be exciting bottles to have, and very rare, nothing beats a well embossed bottle. It is exciting to think that this bottle was actually made. Nothing in the design looks too hard to have made, considering the other Landsberg bottles. I hope some lucky collector has one sitting on a shelf right now. They can call be when they get bored with it. 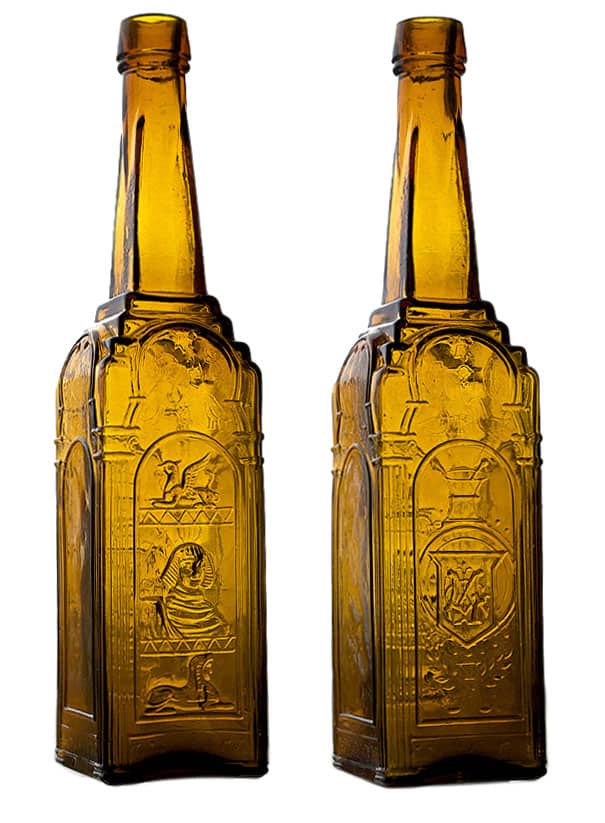 Read: Looking at some Landsberg bottles…

Ferdinand Meyer V is a native of Baltimore, Maryland and has a BFA in Fine Art and Graphic Design from the Kansas City Art Institute and School of Design. Ferdinand is the founding Principal of FMG Design, a nationally recognized design consultation firm. Ferdinand is a passionate collector of American historical glass specializing in bitters bottles, color runs and related classic figural bottles. He is married to Elizabeth Jane Meyer and lives in Houston, Texas with their daughter and three wonderful grandchildren. The Meyers are also very involved in Quarter Horses, antiques and early United States postage stamps. Ferdinand is the past 6-year President of the Federation of Historical Bottle Collectors and is one of the founding members of the FOHBC Virtual Museum.
View all posts by Ferdinand Meyer V →
This entry was posted in Bitters, Collectors & Collections, History and tagged bitters, Bottle, Century, chicago, design, Landsberg, Moses, New York, Patent, sphinx, St. Louis, Viguerie. Bookmark the permalink.