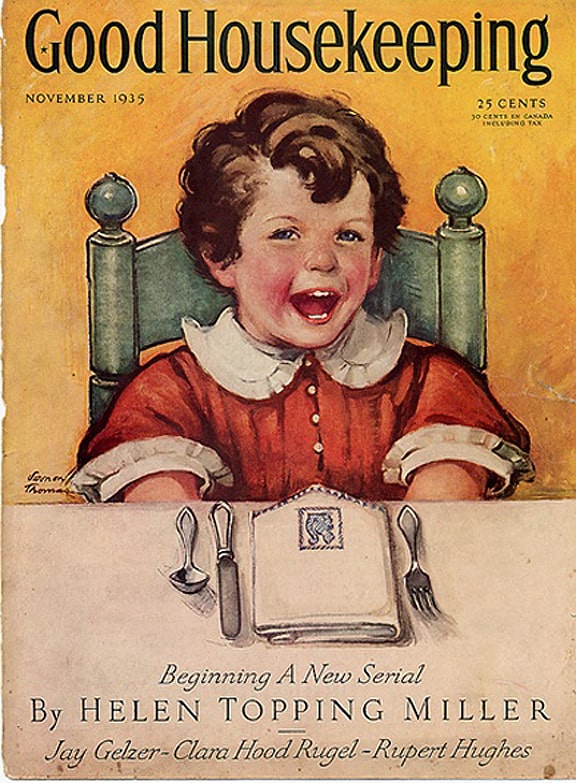 James Viguerie mentioned in a recent e-mail, “For example for B 25 (Dr. Thos. H. Barnes Anti-Dyspeptic & Family Bitters), I have the full patent record (132,233) and see that S. M. Barnes was actually Sarah M. Barnes. I thought it was interesting that a woman had put a bitters out in 1872 (maybe Ferd will do a story on her at Peachridge Glass). 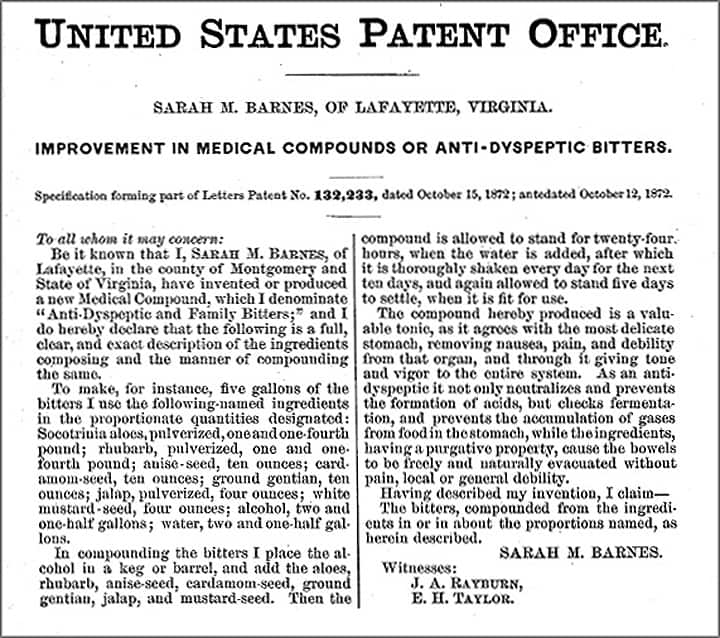 Now this real is interesting as James suggests. What is the story here? Was Sarah Barnes keeping house or selling bitters? Here is the subject patent again:

Be it known that I, SARAH M. BARNES, of LaFayette, in the county of Montgomery and State of Virginia, have invented or produced a new Medical Compound, which I denominate “Anti-Dyspeptic and Family Bitters;” and I do hereby declare that the following is a full, clear, and exact description of the ingredients composing and the manner of compounding the same.

In compounding the bitters I place the alcohol in a keg or barrel, and add the aloes, rhubarb, anise-seed, cardamom-seed, ground gentian, jalap, and mustard-seed. Then the compound is allowed to stand for twenty-four hours, when the water is added, after which it is thoroughly shaken every day for the next ten days, and again allowed to stand five days to settle, when it is fit for use.

The compound hereby produced is a valuable tonic, as it agrees with the most delicate stomach, removing nausea, pain, and debility from that organ, and through it giving tone and vigor to the entire system. As an anti-dyspeptic it not only neutralizes and prevents the formation of acids, but checks fermentation, and prevents the accumulation of gases from food in the stomach, while the ingredients, having a purgative property, cause the bowels to be freely and naturally evacuated without pain, local or general debility.

Having described my invention, I claim – The bitters, compounded from the ingredients in or in about the proportions named, as herein described.

First of all, Sarah M. Barnes was Thomas H. Barnes‘ (b. 1816) wife. They lived in LaFayette, Virginia which is between the cities of Roanoke and Christiansburg in eastern Montgomery County, southwest Virginia. In an 1860 United States Federal Census, Thomas, age 44, was listed as a physician while his wife Sarah, age 36, had no occupation noted. Usually you see something like keeping house as the occupation which was fairly common. Their children were listed as Madora A. (14), Ella C. (12), William M. (8), and Franklin E. Barnes (2). There is a similar listing, as far as their occupations, in the 1850 Federal Census. In the 1880 Census, at 55 years old, Sarah is listed as keeping house.

On 20 June 1862, Thomas Barnes died in LaFayette County, Virginia. I think this might explain why his wife obtained the patent and continued in the bitters business. I used a picture of Good Housekeeping magazine above to illustrate the power and broad appeal of the word ‘housekeeping’ during this period, and even now. The magazine was founded on May 2, 1885 by Clark W. Bryan in Holyoke, Massachusetts. Been around a long time.

Above: This is as-found, other than highlighting letters for photographing. Note that the embossing seems somewhat crude and sloppy and not carefully aligned. A bit on the weak side, too. Found about four feet down in sand, a real accidental find. The spirit moved me to poke into the sand of the drainage trench. No dump, no sign of debris, just one really neat bottle waiting to be pulled from the sand. One of my favorite finds. – Tony Pagano 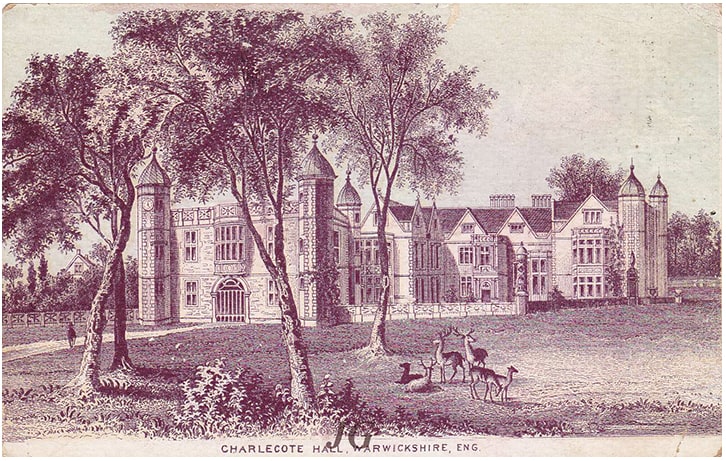 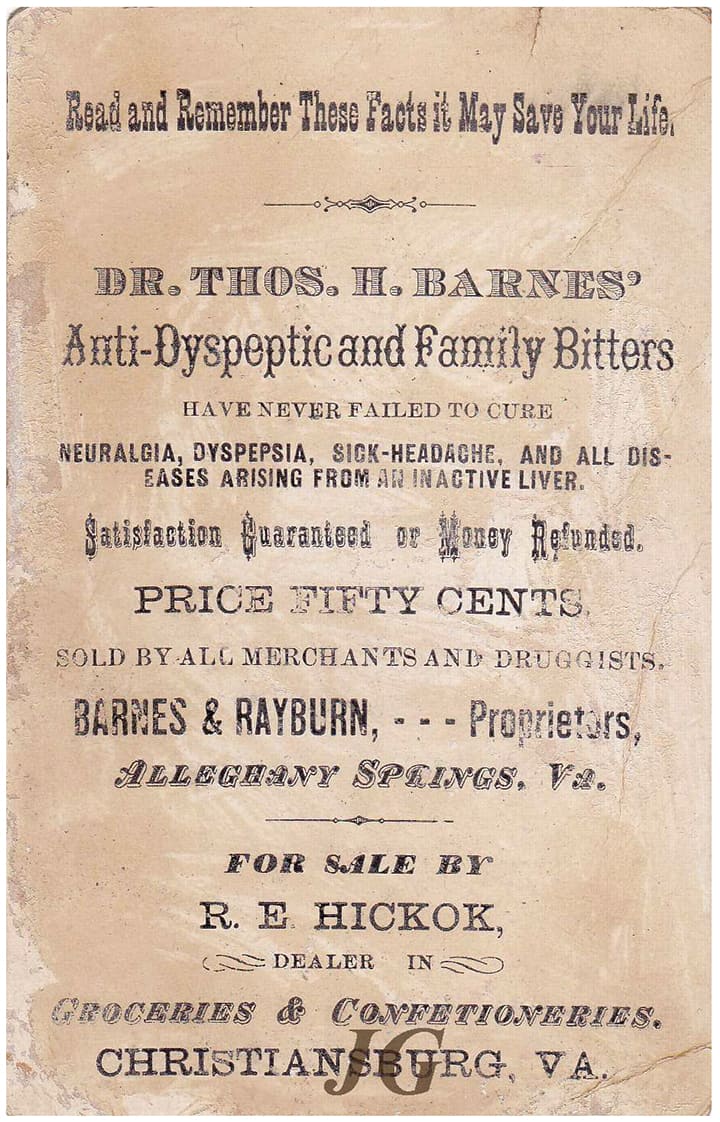 Ferdinand Meyer V is a native of Baltimore, Maryland and has a BFA in Fine Art and Graphic Design from the Kansas City Art Institute and School of Design. Ferdinand is the founding Principal of FMG Design, a nationally recognized design consultation firm. Ferdinand is a passionate collector of American historical glass specializing in bitters bottles, color runs and related classic figural bottles. He is married to Elizabeth Jane Meyer and lives in Houston, Texas with their daughter and three wonderful grandchildren. The Meyers are also very involved in Quarter Horses, antiques and early United States postage stamps. Ferdinand is the past 6-year President of the Federation of Historical Bottle Collectors and is one of the founding members of the FOHBC Virtual Museum.
View all posts by Ferdinand Meyer V →
This entry was posted in Bitters, Digging and Finding, Druggist & Drugstore, History, Medicines & Cures, Publications, Questions, Trade Cards and tagged Barnes, bitters, Dyspeptic, family, Gourd, house, housekeeping, keeping, Lafayette, Medicine, Patent, physician, Sarah, Tony Pagano, Viguerie, Virginia. Bookmark the permalink.