Did Carrie Nation ever smile? 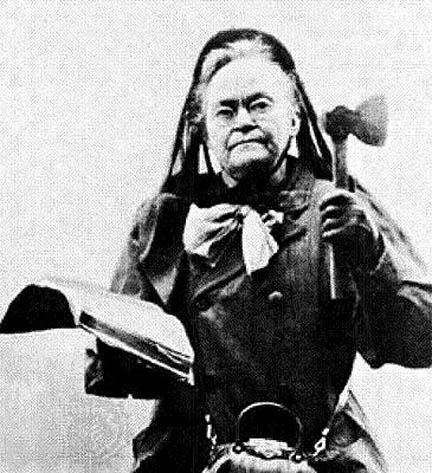 Did Carrie Nation ever smile?

Working on the “Bitters Please” post, I used a picture of Carrie Nation, that adorable leader of the Temperance Movement. It got me thinking, did she ever smile in any of her pictures? Granted, less people smiled back then when posing, with the intimidating photography equipment, by wow, girl, did you ever smile? Maybe when you have an ax in you hand it is difficult to relax those facial muscles.

The next morning I was awakened by a voice which seemed to me speaking in my heart, these words, “GO TO KIOWA,” and my hands were lifted and thrown down and the words, “I’LL STAND BY YOU.” The words, “Go to Kiowa,” were spoken in a murmuring, musical tone, low and soft, but “I’ll stand by you,” was very clear, positive and emphatic. I was impressed with a great inspiration, the interpretation was very plain, it was this: “Take something in your hands, and throw at these places in Kiowa and smash them.”

June 5, 1899, she felt she received her answer in the form of a heavenly vision. 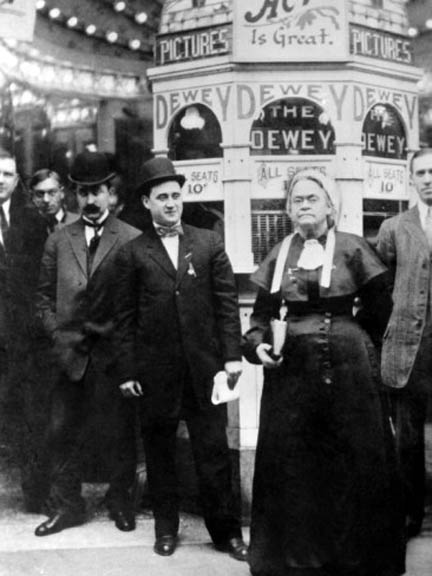 This is not to be confused with a similar but usually involuntary expression of anxiety known as a grimace which is a type of facial expression usually of disgust, disapproval, or pain.

A smile seems to have a favorable appeal to us and makes one likable and more approachable. You relax when someone smiles. Among humans, it is an expression denoting pleasure, sociability, happiness, or amusement. This is not to be confused with a similar but usually involuntary expression of anxiety known as a grimace which is a type of facial expression usually of disgust, disapproval, or pain. Smiling is something that is understood by everyone, regardless of culture, race, or religion; it is internationally known. 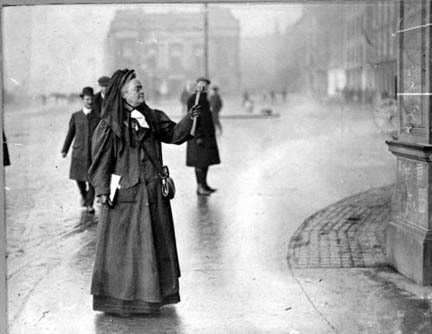 Nation frequently attacked the property of alcohol-serving establishments (most often taverns) with a hatchet.

Carrie Amelia Moore Nation (first name also spelled Carry; November 25, 1846 – June 9, 1911) was an American woman who was a radical member of the temperance movement, which opposed alcohol before the advent of Prohibition. She is particularly noteworthy for promoting her viewpoint through vandalism. Nation frequently attacked the property of alcohol-serving establishments (most often taverns) with a hatchet. 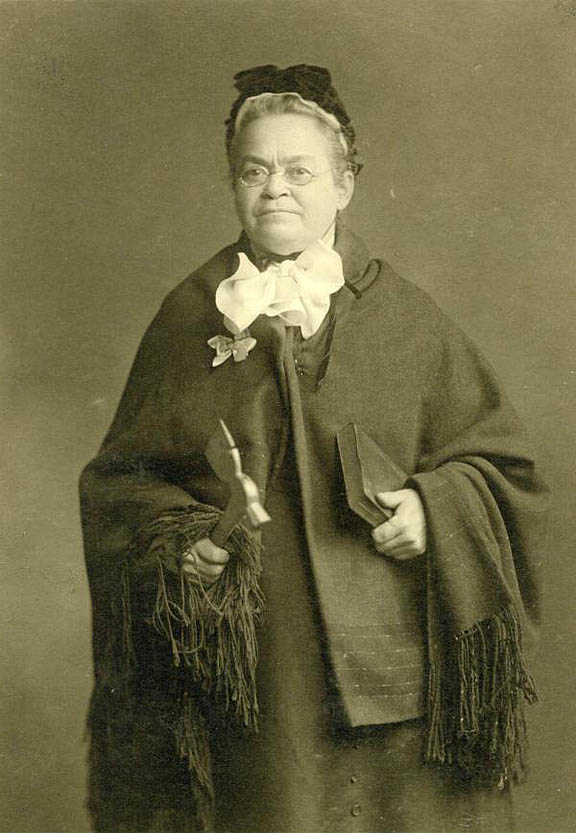 “a bulldog running along at the feet of Jesus, barking at what He doesn’t like”

Nation was a relatively large woman, almost 6 feet tall and weighing 175 pounds with a stern countenance. She described herself as “a bulldog running along at the feet of Jesus, barking at what He doesn’t like” and claimed a divine ordination to promote temperance by destroying bars. 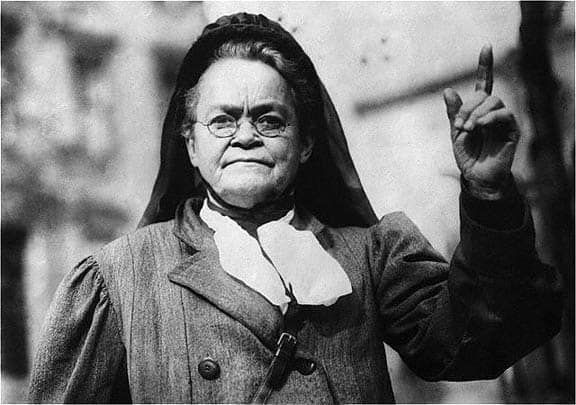 “Men, I have come to save you from a drunkard’s fate“

Responding to the revelation, Nation gathered several rocks – “smashers”, she called them – and proceeded to Dobson’s Saloon on June 7. Announcing “Men, I have come to save you from a drunkard’s fate,” she began to destroy the saloon’s stock with her cache of rocks. After she similarly destroyed two other saloons in Kiowa, a tornado hit eastern Kansas, which she took as divine approval of her actions. 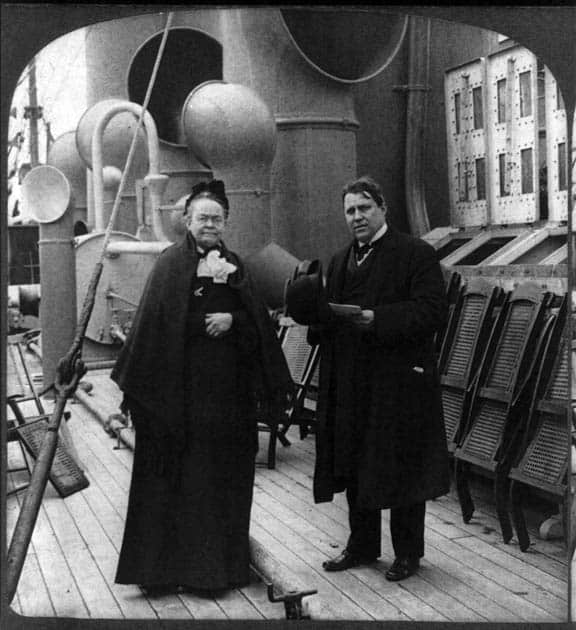 She began her temperance work in Medicine Lodge by starting a local branch of the Woman’s Christian Temperance Union and campaigning for the enforcement of Kansas’ ban on the sales of liquor. Her methods escalated from simple protests to serenading saloon patrons with hymns accompanied by a hand organ, to greeting bartenders with pointed remarks such as, “Good morning, destroyer of men’s souls.” 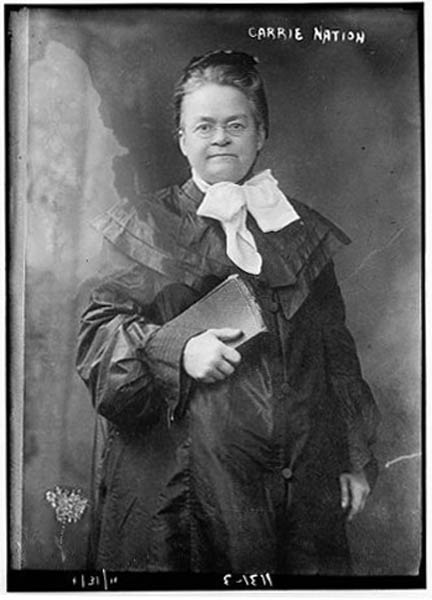 “That is the most sensible thing you have said since I married you.”

Nation continued her destructive ways in Kansas, her fame spreading through her growing arrest record. After she led a raid in Wichita her husband joked that she should use a hatchet next time for maximum damage. Nation replied, “That is the most sensible thing you have said since I married you.” The couple divorced in 1901, not having had any children. Go figure? 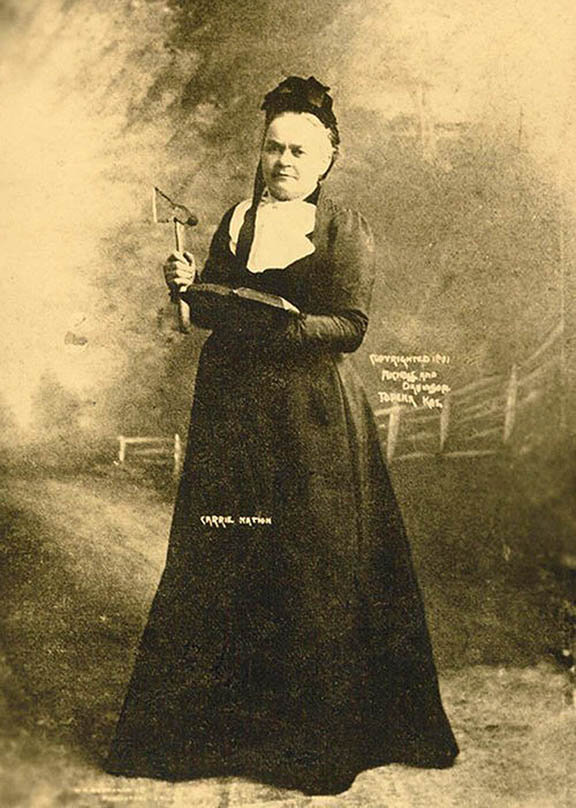 Alone or accompanied by hymn-singing women she would march into a bar, and sing and pray while smashing bar fixtures and stock with a hatchet. Her actions often did not include other people, just herself. Between 1900 and 1910 she was arrested some 30 times for “hatchetations,” as she came to call them. Nation paid her jail fines from lecture-tour fees and sales of souvenir hatchets.

These two pictures are the best I could do without turning one of the top ones upside-down looking for that smile. Like most anyone, I suspect she was warm to some and was different within her photographic shell. I sure would run if she marched into a bar or tavern I was frequenting. 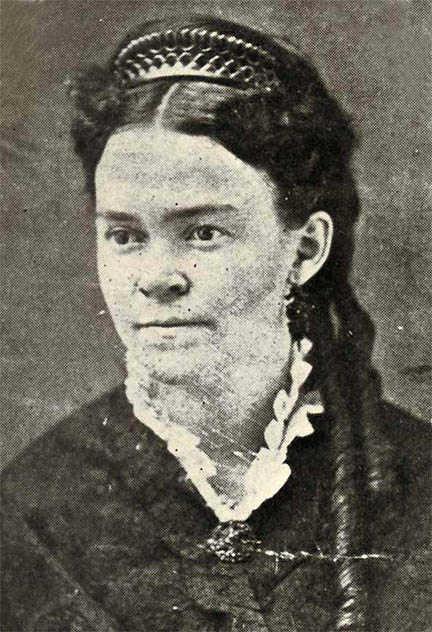 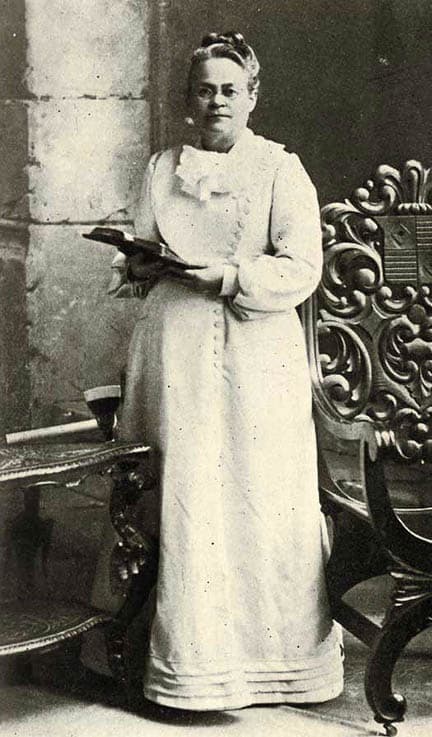 Imagery from various online sources. Much of the text is from Wikipedia.

Ferdinand Meyer V is a native of Baltimore, Maryland and has a BFA in Fine Art and Graphic Design from the Kansas City Art Institute and School of Design. Ferdinand is the founding Principal of FMG Design, a nationally recognized design consultation firm. Ferdinand is a passionate collector of American historical glass specializing in bitters bottles, color runs and related classic figural bottles. He is married to Elizabeth Jane Meyer and lives in Houston, Texas with their daughter and three wonderful grandchildren. The Meyers are also very involved in Quarter Horses, antiques and early United States postage stamps. Ferdinand is the past 6-year President of the Federation of Historical Bottle Collectors and is one of the founding members of the FOHBC Virtual Museum.
View all posts by Ferdinand Meyer V →
This entry was posted in Advice, History, Humor - Lighter Side, Liquor Merchant, Photography, Temperance and tagged alcohol, Amelia, ax, bar, Carrie, Carry, grimace, hatchet, hatchetations, Kansas, Kiowa, Moore, movement, Nation, Prohibition, smile, tavern, Temperance. Bookmark the permalink.