A Bar at the Folies-Bergère Bottle Question

A Bar at the Folies-Bergère Bottle Question

I am writing you in your capacity of president of the Federation of Historical Bottle Collectors. I have a scholarly question. The caveat is that it’s about a bottle in a painting–but it’s a great work of art, so worth looking at. This is Manet’s well-known 1882 painting “A Bar at the Folies-Bergère.” (As you likely know, the Folies-Bergère is a French bar, a famous one at the turn of the century, which may matter to an assessment.) I will include a link to it as it is hung London’s Courtauld Gallery, which allows one to look very closely by zooming in, here: Virtual Tour Courtauld Gallery

My question is this: Do you have an opinion as to the likely contents of the bottle on the farthest left side of the canvas–the one which Manet has signed on its label? Does it look more like a bottle for a wine, an aperitif, a brandy, a cognac, or something else? Any thoughts you have would be appreciated, and you are most welcome to pass the question on to colleagues. Given the painting’s prominence, there may be existing literature on the bottles in this image–I have found none other than that to do with the Bass Ale bottles, and the champagne bottles.

Too, if you have any insights–or references to literature on–its cork, or capsule, or method of sealing (like all the others, this bottle appears unopened)–that would be of great interest. And as I say, if you have any references that deal with how a bottle containing such an alcohol in the late 19th century would be sealed that you can pass on, such a guide would be welcome.

Thank you for your time, and your indulgence. And again, do please feel free to pass this email on.

I set aside entirely the question of the label, but….Thank you again for your time.

Interesting question. Quickly, and without enlarging the bottle or studying the painting, I guessed ‘Absinthe‘ which I understand may not be correct. To help with identification, I isolated and enlarged the subject bottle below.

In a follow-up e-mail, Jessica added “You can add that Bill Lindsey from the SHA/BLM Historic Glass Bottle Identification & Information Website has just proposed red vermouth based on a 1906 USA bottle, and if I could find that the same bottle shape and alcohol was around in Paris in the 1880s, that would be good.”

Can any of you help here?

[From Marianne Dow] Discussions of this painting generally refer to the red bottles as being GRENADINE (red because it’s made from pomegranites) I cannot find a brand referenced. See Manet’s Last Painting 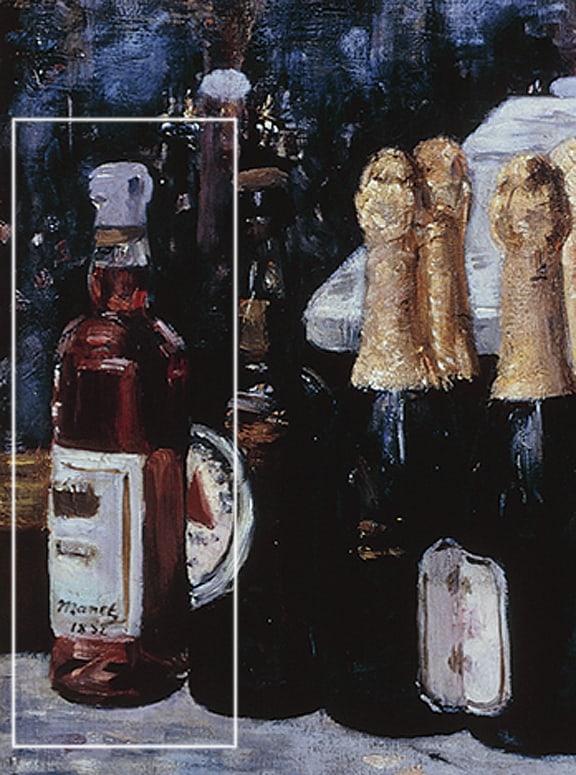 A Bar at the Folies-Bergère

A Bar at the Folies-Bergère (French: Un bar aux Folies Bergère), painted and exhibited at the Paris Salon in 1882, was the last major work by French painter Édouard Manet. It depicts a scene in the Folies Bergère nightclub in Paris. It originally belonged to the composer Emmanuel Chabrier, who was Manet’s neighbor, and hung over his piano.

The painting exemplifies Manet’s commitment to Realism in its detailed representation of a contemporary scene. Many features have puzzled critics but almost all of them have been shown to have a rationale, and the painting has been the subject of numerous popular and scholarly articles.

The central figure stands before a mirror, although critics—accusing Manet of ignorance of perspective and alleging various impossibilities in the painting—have debated this point since the earliest reviews were published. In 2000, however, a photograph taken from a suitable point of view of a staged reconstruction was shown to reproduce the scene as painted by Manet. According to this reconstruction, “the conversation that many have assumed was transpiring between the barmaid and gentleman is revealed to be an optical trick—the man stands outside the painter’s field of vision, to the left, and looks away from the barmaid, rather than standing right in front of her.” As it appears, the observer should be standing to the right and closer to the bar than the man whose reflection appears at the right edge of the picture. This is an unusual departure from the central point of view usually assumed when viewing pictures drawn according to perspective.

Asserting the presence of the mirror has been crucial for many modern interpreters.  It provides a meaningful parallel with Las Meninas, a masterpiece by an artist Manet admired, Diego Velázquez. There has been a considerable development of this topic since Michel Foucault broached it in his book The Order of Things (1966).

The art historian Jeffrey Meyers describes the intentional play on perspective and the apparent violation of the operations of mirrors: “Behind her, and extending for the entire length of the four-and-a-quarter-foot painting, is the gold frame of an enormous mirror. The French philosopher Maurice Merleau-Ponty has called a mirror ‘the instrument of a universal magic that changes things into spectacles, spectacles into things, me into others, and others into me.’ We, the viewers, stand opposite the barmaid on the other side of the counter and, looking at the reflection in the mirror, see exactly what she sees… A critic has noted that Manet’s ‘preliminary study shows her placed off to the right, whereas in the finished canvas she is very much the centre of attention.’ Though Manet shifted her from the right to the center, he kept her reflection on the right. Seen in the mirror, she seems engaged with a customer; in full face, she’s self-protectively withdrawn and remote.”

The painting is rich in details which provide clues to social class and milieu. The woman at the bar is a real person, known as Suzon, who worked at the Folies-Bergère in the early 1880s. For his painting, Manet posed her in his studio. By including a dish of oranges in the foreground, Manet identifies the barmaid as a prostitute, according to art historian Larry L. Ligo, who says that Manet habitually associated oranges with prostitution in his paintings. T.J. Clark says that the barmaid is “intended to represent one of the prostitutes for which the Folies-Bergère was well-known”, who is represented “as both a salesperson and a commodity—something to be purchased along with a drink.”

Other notable details include the pair of green feet in the upper left-hand corner, which belong to a trapeze artist who is performing above the restaurant’s patrons. The beer bottles depicted are easily identified by the red triangle on the label as Bass Pale Ale, and the conspicuous presence of this English brand instead of German beer has been interpreted as documentation of anti-German sentiment in France in the decade after the Franco-Prussian War. [Wikipedia]

Ferdinand Meyer V is a native of Baltimore, Maryland and has a BFA in Fine Art and Graphic Design from the Kansas City Art Institute and School of Design. Ferdinand is the founding Principal of FMG Design, a nationally recognized design consultation firm. Ferdinand is a passionate collector of American historical glass specializing in bitters bottles, color runs and related classic figural bottles. He is married to Elizabeth Jane Meyer and lives in Houston, Texas with their daughter and three wonderful grandchildren. The Meyers are also very involved in Quarter Horses, antiques and early United States postage stamps. Ferdinand is the past 6-year President of the Federation of Historical Bottle Collectors and is one of the founding members of the FOHBC Virtual Museum.
View all posts by Ferdinand Meyer V →
This entry was posted in Art & Architecture, Museums, Questions, Spirits, Wine & Champagne and tagged bar, Bergère, Burstein, Courtauld, Dow, Folies, gallery, Lindsey, Manet, Marianne, question, Vermouth. Bookmark the permalink.

1 Response to A Bar at the Folies-Bergère Bottle Question