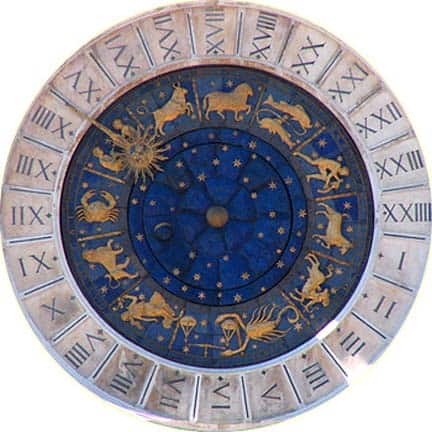 “Madame Ross, doctress and astrologist, was born with a natural gift and was never known to fail. She can tell your very thoughts, cause speedy marriages and bring those together and those long separated”.

Shoulder-straps: A Novel of New York and the Army, 1862

I had fun today tracking down an interesting woman related to the bitters trade named Madame (also spelled Madam) Ross. She was a Doctress, Healing Medium and Astrologist and must have really moved around as people figured out her game. I found advertisements for her saying she was from Europe (yes, that is vague) and then she shows up living in New York (1868) and traveling to Chicago (1869), New Orleans (1872 and 1873), Galveston (1873), Staunton, Virginia (late 1873), Dallas (1874) and Charleston, South Carolina (1879). I’m sure there are many more locations. I picture her traveling by rail to each of these cities, doing her trade and maybe having a private Pullman rail car similar to the old television series Wild Wild West.

What surprised me in one of her advertisements was the mention of an Australian Bitters (see below) which she was hawking. This appears to be unlisted. Of course there is the Melbourne Australian Hop Bitters but that is an Aussie product.

Newspaper Advertisement
A 139.3 AUSTRALIAN BITTERS, Austrailian Bitters, the permanent cure of Female Complaint. Madam Doctress Ross. – Times Picayune (New Orleans, Louisiana), 1872
Madame Ross said she was from Europe and advertised in U.S. newspapers as an Astrologist, Doctress and Healing Medium. She traveled the country and pitched her powers and products. 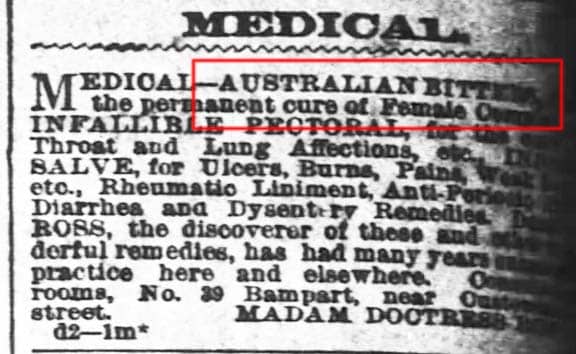 Madame Ross offers $5,000 to any one who can equal her. She has astonished thousands of people who have witnessed her. She is the only lady that is really endowed with the natural gift of revealing the past and present, and foretelling the future. This lady has travelled throughout Europe and America, and wherever she has visited has never failed to give unbounded satisfaction. She has been pronounced by the most scientific phrenologist to be tho most wonderful in her profession. Her advice on business is invaluable. She respectfully invites all to call and be convinced.

She can bring the Separated Together!

And convert misery and dissension into pleasure and contentment. Happiness, health, long life, good luck and success in all undertakings, by water or land, to all who visit her. The Madam has been endowed with wonderful natural gifts from infancy. All that visit her are satisfied.

I thought this was also pretty cool talking about a nest of  astrologists and clairvoyants in New York City:

About Twentieth street and Seventh avenue are clustered a galaxy of astrologists and clairvoyants, among whom are the following:

Some of her advertisements that were placed in local newspapers to let customers know she was on the way or already in town.

Look Here! – Are You in Trouble? Madame Ross lives and works in New York – Three years among the working-classes in the United States during the war, 1865

A Sure Cure, With or Without Medicine by Doctress Ross. – New York Herald, August 7, 1868 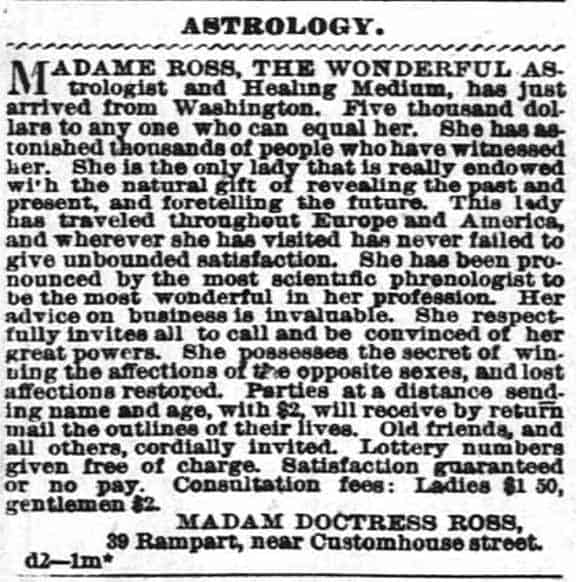 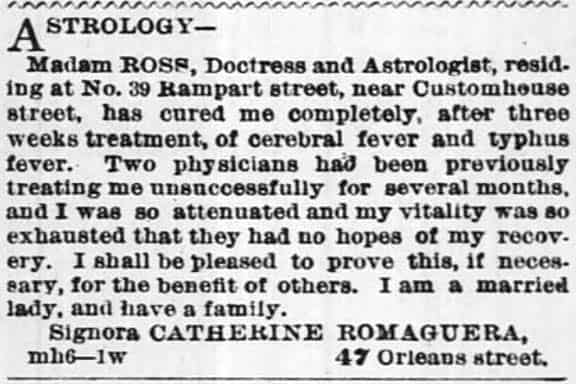 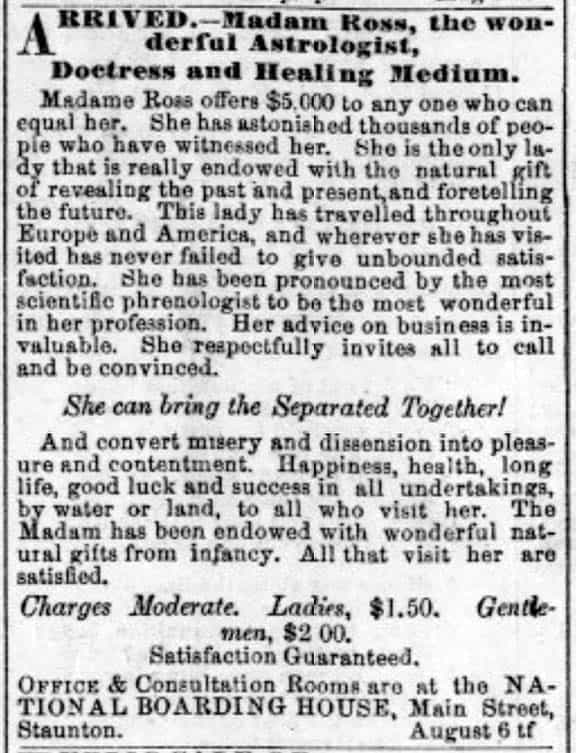 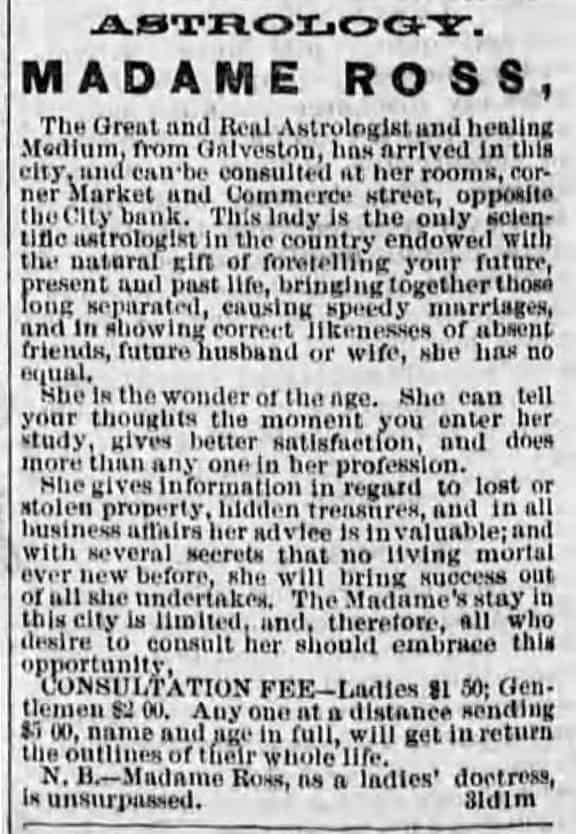 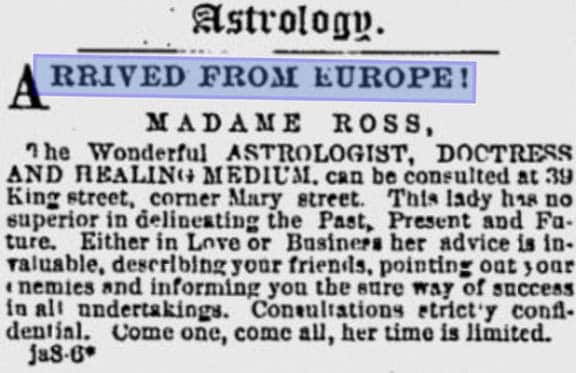 Ferdinand Meyer V is a native of Baltimore, Maryland and has a BFA in Fine Art and Graphic Design from the Kansas City Art Institute and School of Design. Ferdinand is the founding Principal of FMG Design, a nationally recognized design consultation firm. Ferdinand is a passionate collector of American historical glass specializing in bitters bottles, color runs and related classic figural bottles. He is married to Elizabeth Jane Meyer and lives in Houston, Texas with their daughter and three wonderful grandchildren. The Meyers are also very involved in Quarter Horses, antiques and early United States postage stamps. Ferdinand is the past 6-year President of the Federation of Historical Bottle Collectors and is one of the founding members of the FOHBC Virtual Museum.
View all posts by Ferdinand Meyer V →
This entry was posted in Advice, Bitters, History, Medicines & Cures and tagged Astrologist, Australian, bitters, Doctress, Healing, Madam, Madame, Medium, New York, Ross. Bookmark the permalink.