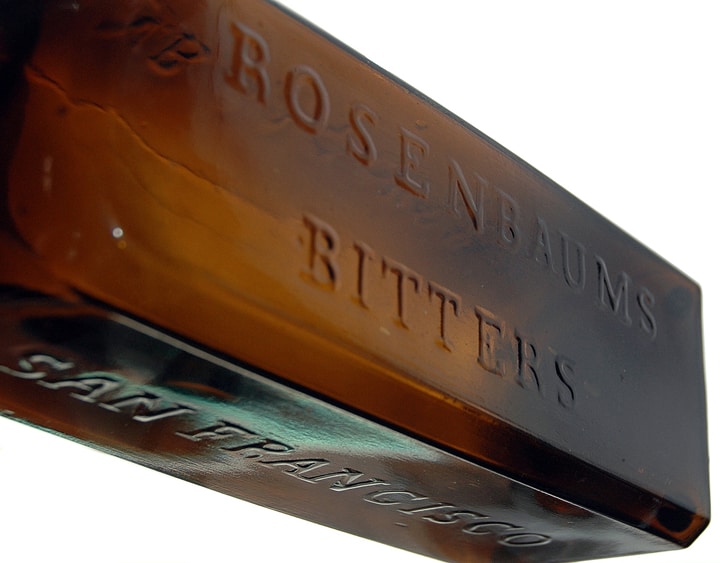 Who was this Dr. Rosenbaum?

Quite a bit has been written about N. B. Jacob’s & Co. and Dr. Rosenbaum’s Celebrated Stomach Bitters from San Francisco. Periodically, I try to reach back and find the earliest advertising and directory listings for Dr. Rosenbaum hoping to land on evidence to further support that the brand started in Philadelphia and prospered in the west. There is a copy of a Rosenbaum’s Bitters advertisement within Early Glassworks of California by Warren B. Friedrich that says,”Prepared by Dr. Rosenbaum, Manufacturer and Proprietor, South Front Street, Philadelphia.”

The western ads can be found and are numerous. A few are included in this post dating from 1858 to 1868. As far as finding any eastern advertising or directory listings, I am still coming up short. Who was this Dr. Rosenbaum?

Philadelphia: G. Rosenbaum, N. Front Street – Journal of the Common Council, of the City of Philadelphia, 1886

Kentucky: It certainly was not the Rosenbaum Brothers who were whiskey dealers from Louisville, Kentucky who were listed in directories from 1886-1905 selling Buchu Gin, Glee Club and Kentucky Home among other items.

San Francisco: It is not A. S. Rosenbaum & Co., Importers and Jobbers in Foreign and Domestic Cigars and Tobacco. S.E. corner California and Battery streets, San Francisc0, around 1878

Philadelphia: Seeking information on my GGGG Grandparents, Charles Casper Rosenbaum of Coblenz, Germany and Christinia Hunter of Holland. They arrived in Philadelphia and had nine children before settling in Indiana. 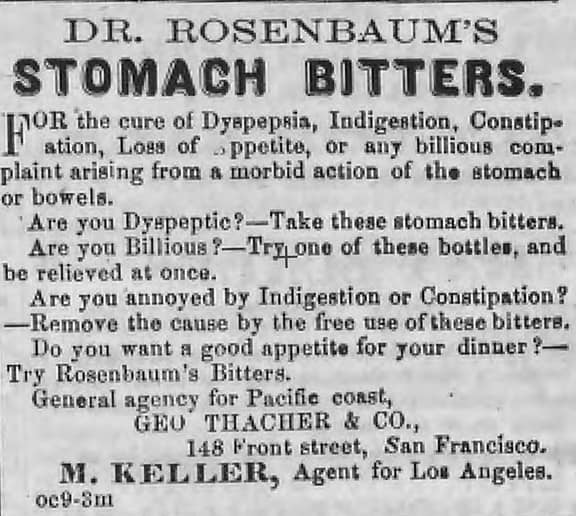 Note: This bottle was probably blown first in an Eastern glass house and then the mold was taken to San Francisco where more bottles were blown at the Pacific Glass Works. Bottles dug from the early 1860’s site in San Francisco have characteristics of bottles blown at eastern glasshouses and bottles from the late 1860’s sites have characteristics of Western blown bottles. 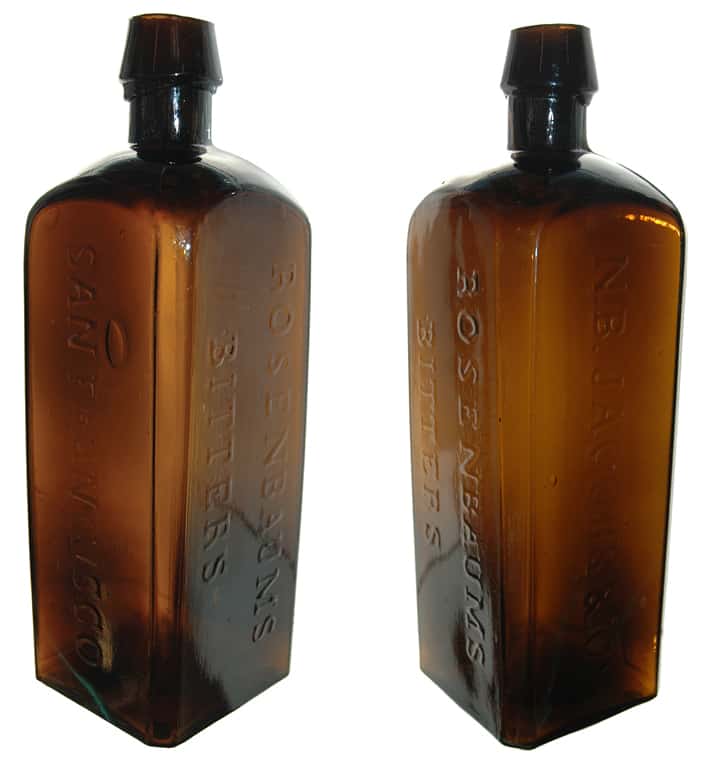 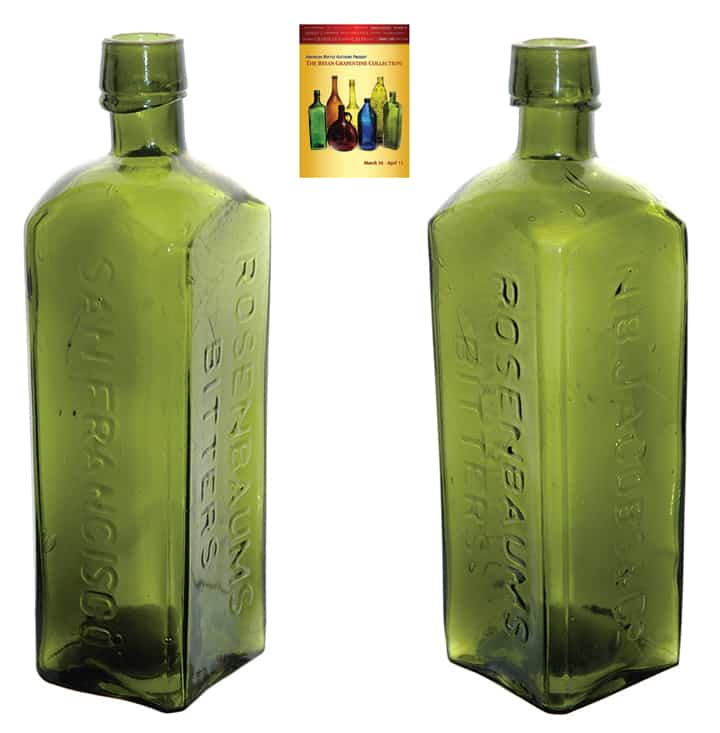 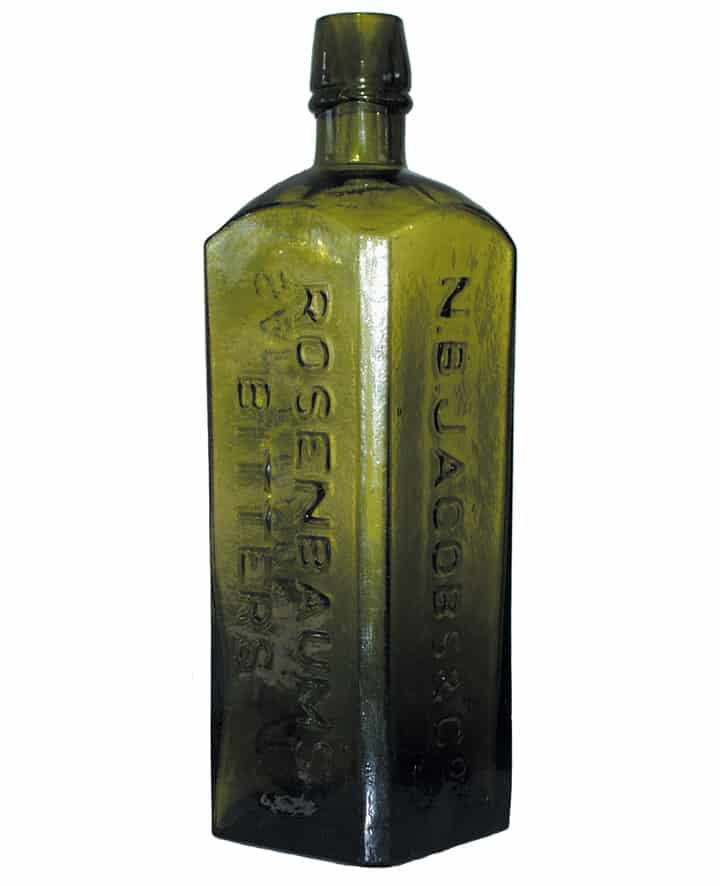 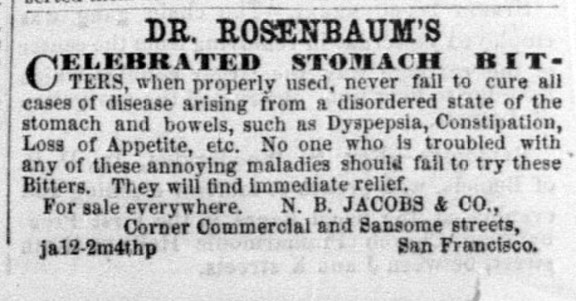 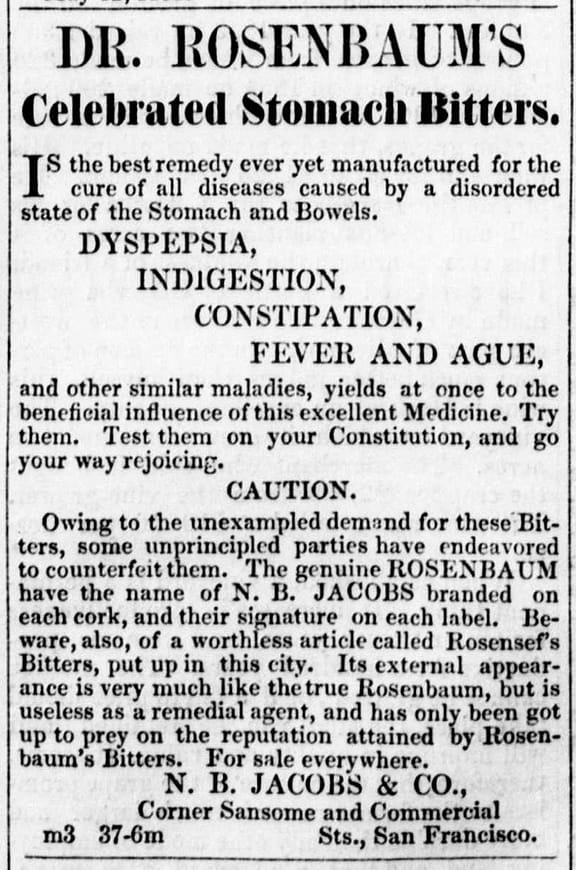 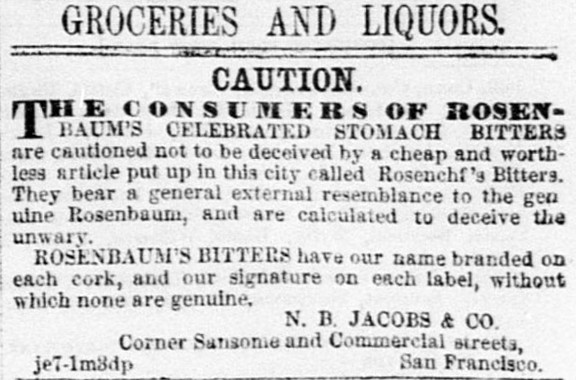 25 cases of Rosenbaum’s Bitters. This make’s me think there were coming in from the East Coast. – 1860 San Francisco advertisement 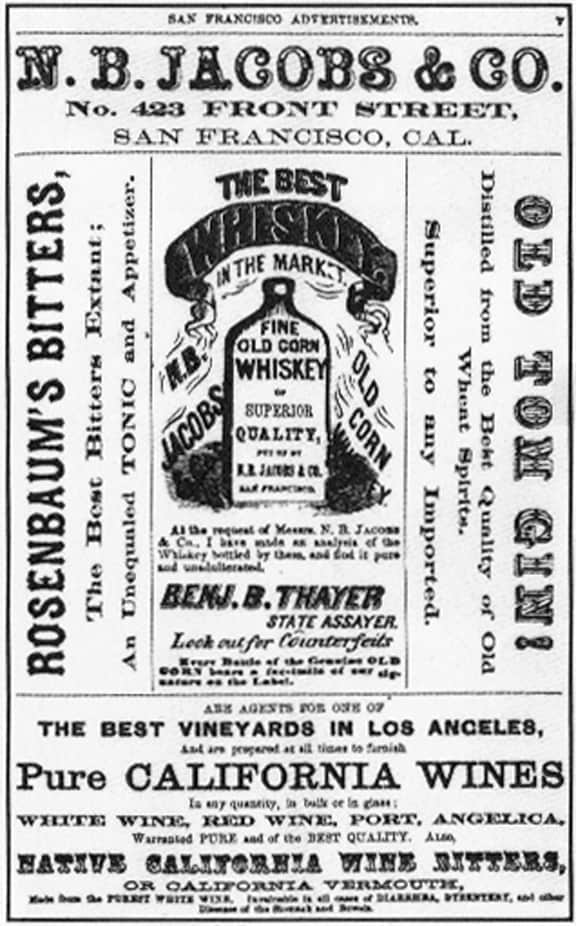 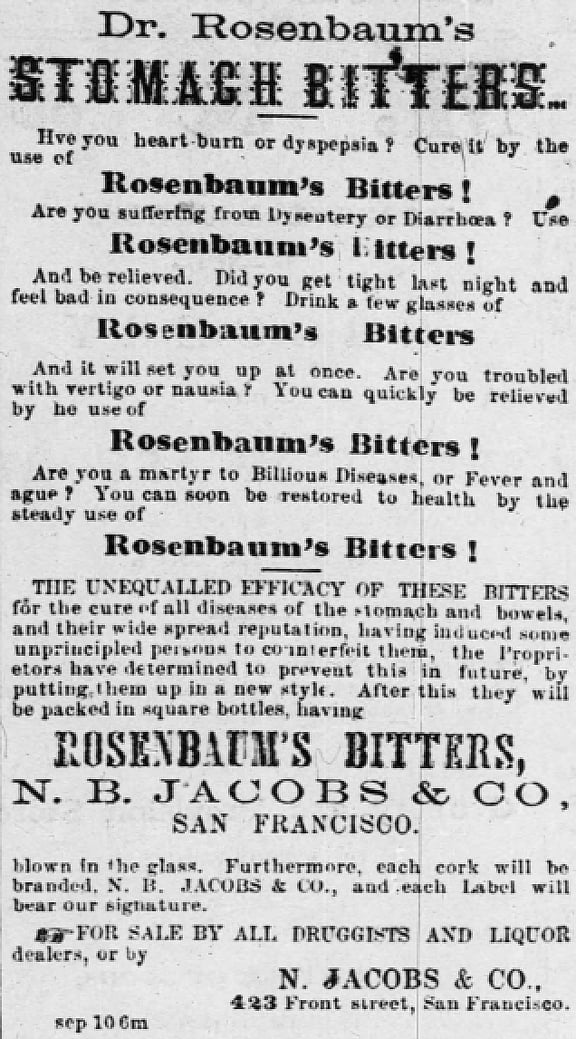 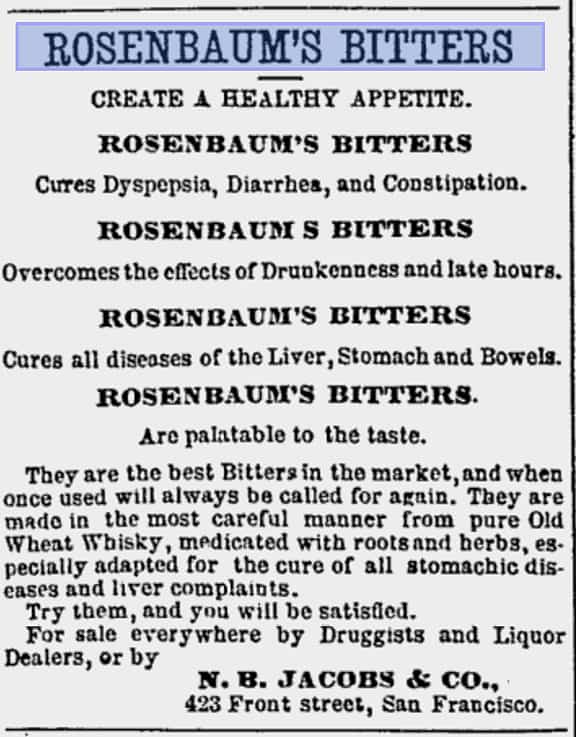 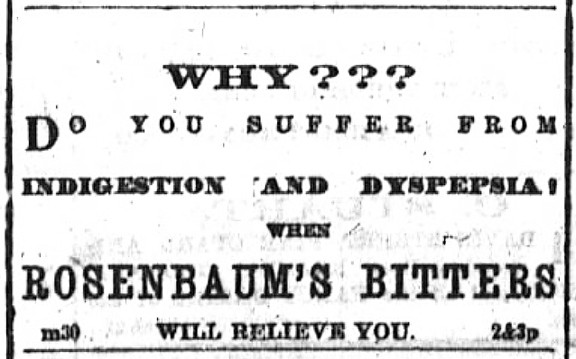 Simple posting for Rosenbaum’s Bitters in the San Francisco Chronicle, 1868 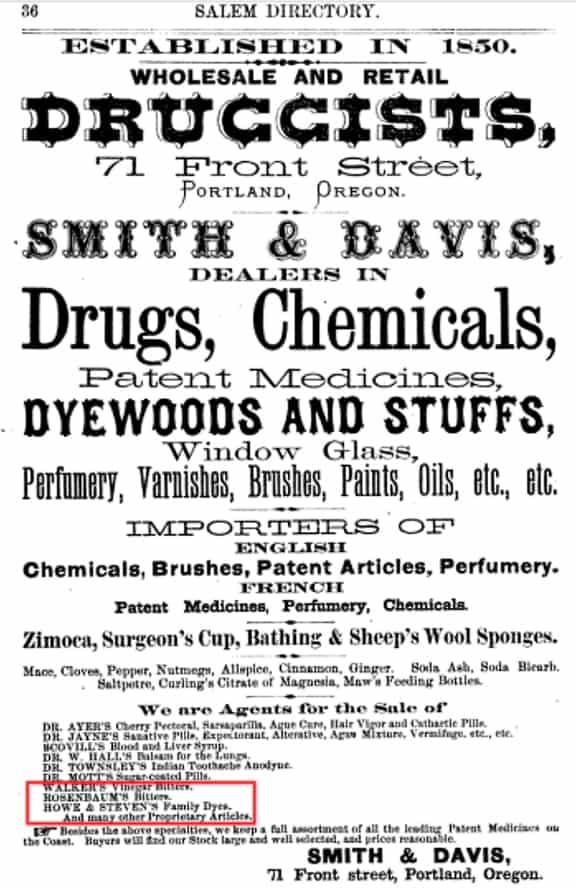 Ferdinand Meyer V is a native of Baltimore, Maryland and has a BFA in Fine Art and Graphic Design from the Kansas City Art Institute and School of Design. Ferdinand is the founding Principal of FMG Design, a nationally recognized design consultation firm. Ferdinand is a passionate collector of American historical glass specializing in bitters bottles, color runs and related classic figural bottles. He is married to Elizabeth Jane Meyer and lives in Houston, Texas with their daughter and three wonderful grandchildren. The Meyers are also very involved in Quarter Horses, antiques and early United States postage stamps. Ferdinand is the past 6-year President of the Federation of Historical Bottle Collectors and is one of the founding members of the FOHBC Virtual Museum.
View all posts by Ferdinand Meyer V →
This entry was posted in Advertising, Bitters, History, Liquor Merchant, Questions, Remedy and tagged bitters, George Thatcher & Co., N. B. Jacob's & Co., Philadelphia, Rosenbaum, San Francisco, Simi, Western. Bookmark the permalink.