Is there really a Swindle’s Texarkana Bitters?

Is there really a Swindle’s Texarkana Bitters? 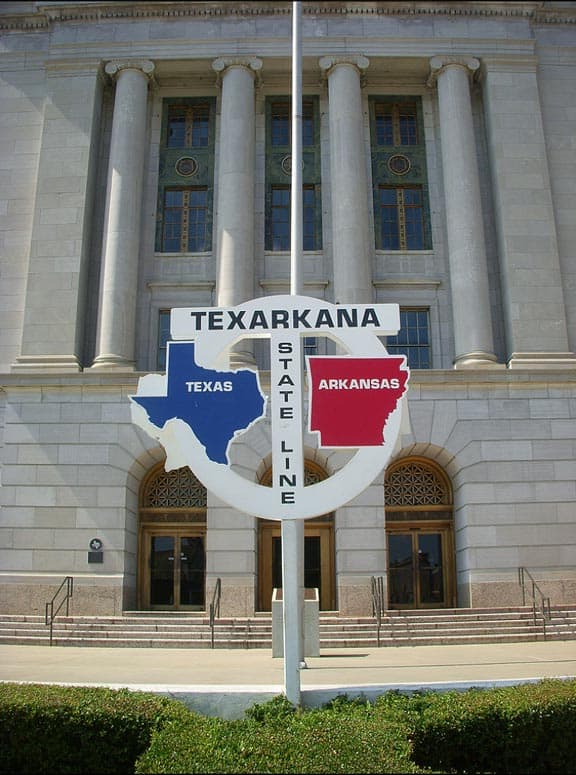 TEXas, ARKansas, and nearby LouisiANA

Is there really a Swindle’s Texarkana Bitters? Is somebody pulling our leg here? And a man named Swindle selling this concoction? It reminds me of the old Three Stooges episode where they visited some lawyers. The sign on the door read, “Dewey, Cheatem & Howe”. Yuk Yuk.

Texarkana was founded in 1873 on the junction of two railroads. The name is a portmanteau of TEXas, ARKansas, and nearby LouisiANA. There are three stories on how this name was derived.

One tradition tells of a Red River steamboat named the Texarkana which plied the water of the Red River as early as 1860.

A third account, and most popular, claims that when the St. Louis, Iron Mountain and Southern Railroad was building its line through the area, Col. Gus Knobel, who made the survey, coined the name and erected a large sign at the site. He allegedly painted “TEX-ARK-ANA” on a plank and nailed it to a tree, saying, “This is the name of a town which is to be built here.” 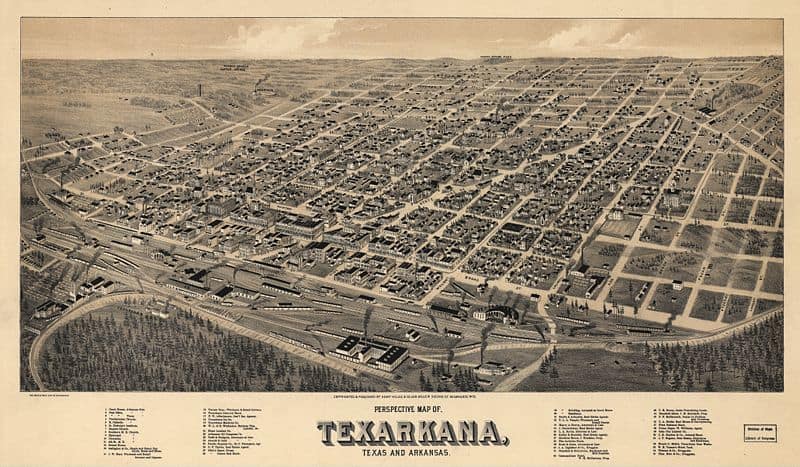 In 1876, Texarkana, Texas, was granted a charter under an act of the Texas legislature, and a Texarkana, Texas, post office operated from 1886 to 1892. Later, Congressman John Morris Sheppard secured a postal order officially changing the name to “Texarkana, Arkansas-Texas”

Typically, Scott Joplin joined the spastic circle of musicians spilling out into the dirt road in front of 618 Hazel Street. He played alongside Swindle, the fast talking singer from Plain Dealing, Louisiana who sold “Texarkana Bitters” to the colored folks in town, and with Professor Johnson, a music teacher, barber, real estate investor, and widely respected shaman in both Miller and Bowie Counties.

Railroads were quick to see the possibilities of this vast area, and in the late 1850s the builders of the Cairo and Fulton Railroad were pushing their line steadily across Arkansas. By 1874, they had crossed the Red River and had reached the Texas state line. Between February 16 and March 19, 1874, trains ran between the Texas border and Red River, whence passengers and freight were ferried to Fulton to continue by rail. The Red River Bridge opened on March 20, 1874, and since then trains have run directly from Texarkana to St. Louis. 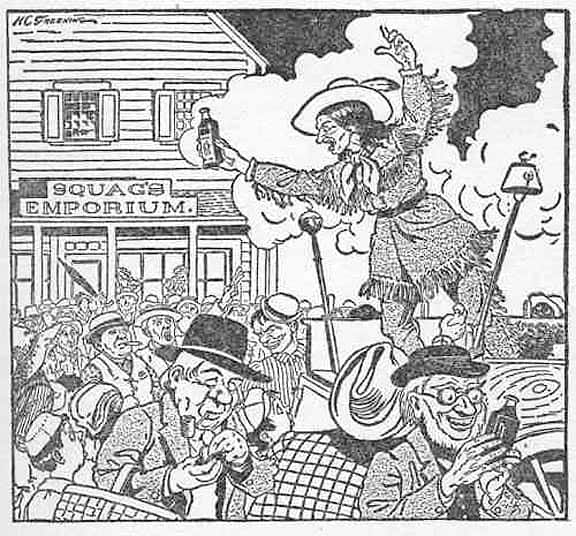 “I … commenced selling the bitters on Main Street.” – from The Gentle Grafter, by O. Henry, Illustrated by H. C. Greening and May Wilson Preston

There was keen rivalry between the 1870s railroad builders. The Texas and Pacific reached across Texas to the Arkansas state line. The border was the logical place for the different railways to connect. On December 8, 1873, the Texas and Pacific Railroad sold the first town lots for the future city. First to buy was J. W. Davis, who purchased the land where today’s Hotel McCartney now stands, opposite Union Station.

Miller County is probably the only county in the United States which was abolished, only to be reestablished later. Miller County was formed in 1820 to honor James Miller who was Arkansas’ first governor. Miller County was formed with a large degree of uncertainty as to the location of the line dividing the county and the Mexican boundary. Consequently, settlers felt that Arkansas levied and collected taxes on land which eventually might be held by Mexico. Moreover, many who resented the oppression of Texans by the Mexicans were openly declaring allegiance to the Texans. 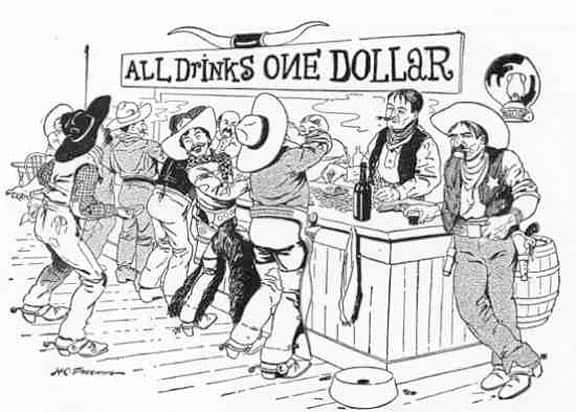 “They began to cuss, amiable, and throw down dollars.” – from The Gentle Grafter, by O. Henry, Illustrated by H. C. Greening and May Wilson Preston

This led to general unrest, and after the Texas Republic was created, it grew worse. So, in 1838, Governor James Conway proposed that the “easiest and most effective remedy is the abolition of Miller County to an area which is more patriotic.” From that year until 1874, it was a part of Lafayette County. Its re-establishment sprung only from the sale of town lots in Texarkana in 1873. Efforts of the young town to be incorporated were not realized until October 17, 1880, nearly seven years after Texarkana, Texas (June 12, 1874) was formed. December 8, 1873, is generally recognized by both cities as the date of organization. [Wikipedia and other sources] 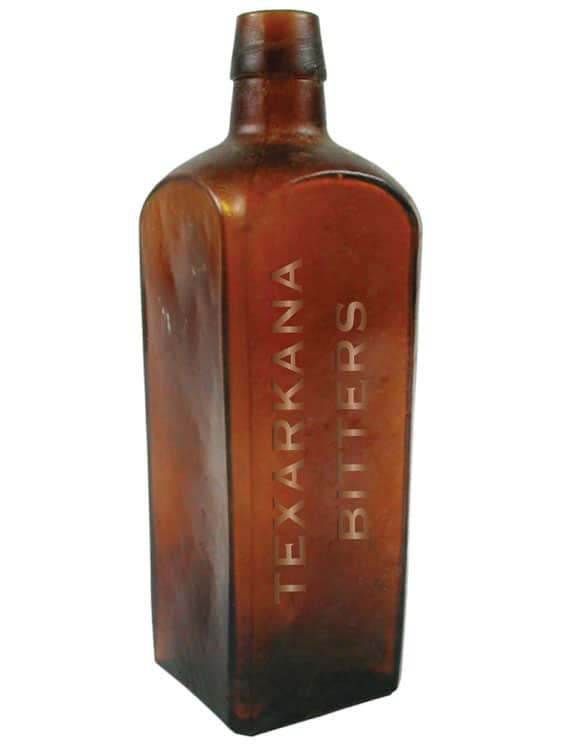 So is there really a Swindle’s Texarkana Bitters? I doubt it. But I am looking!

There is a Texarkana Bitters! 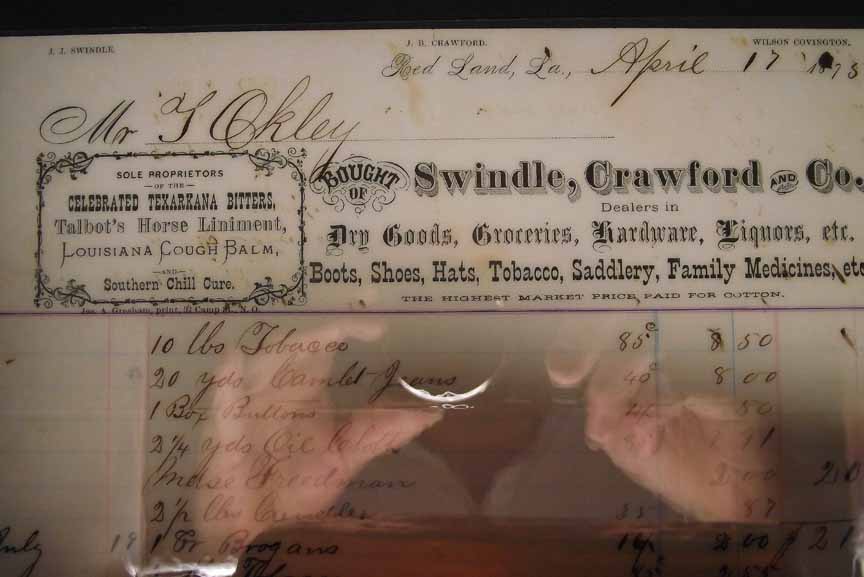 Ferdinand, Hello again, my name is Wayne Loschen and I sent you the picture of the Malakoff Bitters from New Orleans a while back. I have a little info on the Texarkana Bitters you wrote the article on yesterday. I have an actual receipt or bill of sale from the store in Redland you referenced. At the moment it is on display at the Spring Street Museum in Shreveport, where my son is director. He is going to take a photo of the receipt and will try to get it to you.

The receipt dates from around 1871 and it states at the top of the letterhead that Swindle, Crawford Co. is the sole proprietor of the celebrated Texarkana Bitters, Louisiana Cough Balm, and Talbots Horse Liniment. I believe this was probably a backroom concoction and was put up with a plain bottle and paper label. So your question is answered, there was a Texarkana Bitters. I live around 10 miles from Redland and have always dreamed of finding that bottle, but there are no signs of the old store anywhere to be found.

Here is the sales receipt from Swindle’s store dated, April 17th 1875  from Redland Louisiana. I have it on display at the Spring Street Historical Museum in Shreveport. I’m sure you know that Redland is an old ghost town just east of Plain Dealing. I hope this answers your question.

I have taken the liberty to look further at this wonderful information provided by Wayne and Marty Loschen related to the April 17, 1875 Swindle, Crawford and Company receipt from Red Land, Louisiana that is held by the Spring Street Historical Museum in Shreveport, Louisiana. I have isolated the graphics and clearly see the Celebrated Texarkana Bitters product name along with Talbot’s Horse Liniment, Louisiana Cough Balm and Southern Chill Cure. I also see three persons listed on the receipt; J. J. Swindle, J. B. Crawford and Wilson Covington.

“the receipt was given to me back in the 70’s by the great niece of the man whose name is on the receipt. Timothy Okley died in 1911 and is buried in a small country cemetery not far from my house here in Springhill” 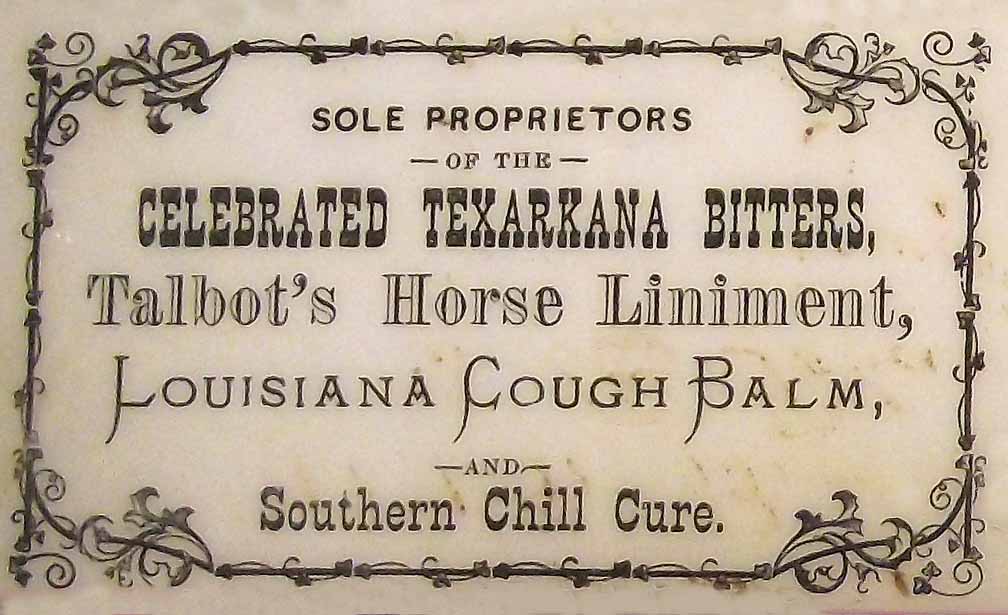 John Jones Swindle, partner, Swindle, Crawford and Company, was Caleb Swindles son. Caleb Swindle was born on September 20, 1800 in North Carolina. He resided in 1842 in Red Land, Bossier Parrish, Louisiana. He died on January 15, 1880 in Bossier Parrish, Louisiana. Caleb had eight children with four wives. John Jones Swindle was born on April 25, 1840 and died in 1897. J. J. Swindle had 9 children. In May, 1862, J. J. Swindle joined the Bosier Cavalry. He was married to Mattie E. Eden on January 1, 1861. He was also married later to Mary Graham.

J. B. Crawford, partner, Swindle, Crawford and Company, was born about 1838 in Alabama. His wife was named Elizabeth Holloway. He is mentioned in several instances in Court Documents as being in attendance at family meetings in regards to minor children, in 1879.

Wiliam Wilson Covington, partner, Swindle, Crawford and Company, was born in Tippah County, North Carolina on March 1, 1832, and was as son of Miles and Margaret (Weeks) Covington. They came to Bossier Parish, Louisiana in 1841, locating near Red Land. When Wilson was 21 years he began farming, like his father before him, and had a good farm of 380 acres that had a considerable portion under cultivation and was well improved with excellent buildings. He raised stock but specialized in cotton and corn. In March 1862, he joined the Company C, 6th Louisiana Cavalry C.S.A., “Bossier Cavalry” and was a Proud Confederate Soldier (inscribed on his grave marker) and remained there until the end of the Civil War. In May 1865, he left the command at Alexandria, Louisiana and came home, and here, in 1870, opened a dry goods store at Red Land, being a member of the firm of Swindle, Crawford & Co.. This firm was afterward dissolved, and Mr. Covington and Mr. Crawford became associated in business for another five years. Mr. Covington died on May 24, 1895.

Ferdinand Meyer V is a native of Baltimore, Maryland and has a BFA in Fine Art and Graphic Design from the Kansas City Art Institute and School of Design. Ferdinand is the founding Principal of FMG Design, a nationally recognized design consultation firm. Ferdinand is a passionate collector of American historical glass specializing in bitters bottles, color runs and related classic figural bottles. He is married to Elizabeth Jane Meyer and lives in Houston, Texas with their daughter and three wonderful grandchildren. The Meyers are also very involved in Quarter Horses, antiques and early United States postage stamps. Ferdinand is the past 6-year President of the Federation of Historical Bottle Collectors and is one of the founding members of the FOHBC Virtual Museum.
View all posts by Ferdinand Meyer V →
This entry was posted in Bitters, History, Humor - Lighter Side, Museums, Questions and tagged Arkansas, bitters, Cheatem, Covington, Crawford, Dewey, Howe, Land, line, Loschen, Louisiana, Okley, Railroad, Red, state, swindle, Texarkana, texas. Bookmark the permalink.