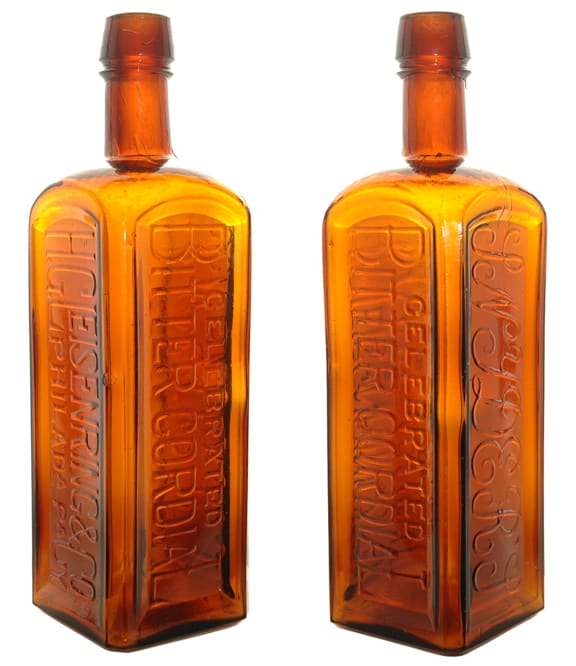 I spotted a dug, Snyder’s Celebrated Bitter Cordial on eBay and it lead me to thinking about the bottle, the fancy “Snyder’s” script and H. G. Leisenring. This bitters product appears only momentary in time, in a blink of an eye, and vanishes just like the fancy proprietor, Harry G. Leisenring did when he disappeared after his wax show failed at the Centennial International Exposition. It seems that old Harry had been afflicted with “Centennial enterprise fever” and used company funds and other investors money to create life-size and life-like wax models of the signers of the Declaration of Independence. When this exhibit failed, the money and Harry disappeared.

The Centennial International Exhibition of 1876, the first official World’s Fair in the United States, was held in Philadelphia, Pennsylvania, from May 10 to November 10, 1876, to celebrate the 100th anniversary of the signing of the Declaration of Independence in Philadelphia. Officially named the International Exhibition of Arts, Manufactures and Products of the Soil and Mine, it was held in Fairmount Park along the Schuylkill River on fairgrounds. About 10 million visitors attended, equivalent to about 20% of the population of the United States at the time. [Wikipedia] 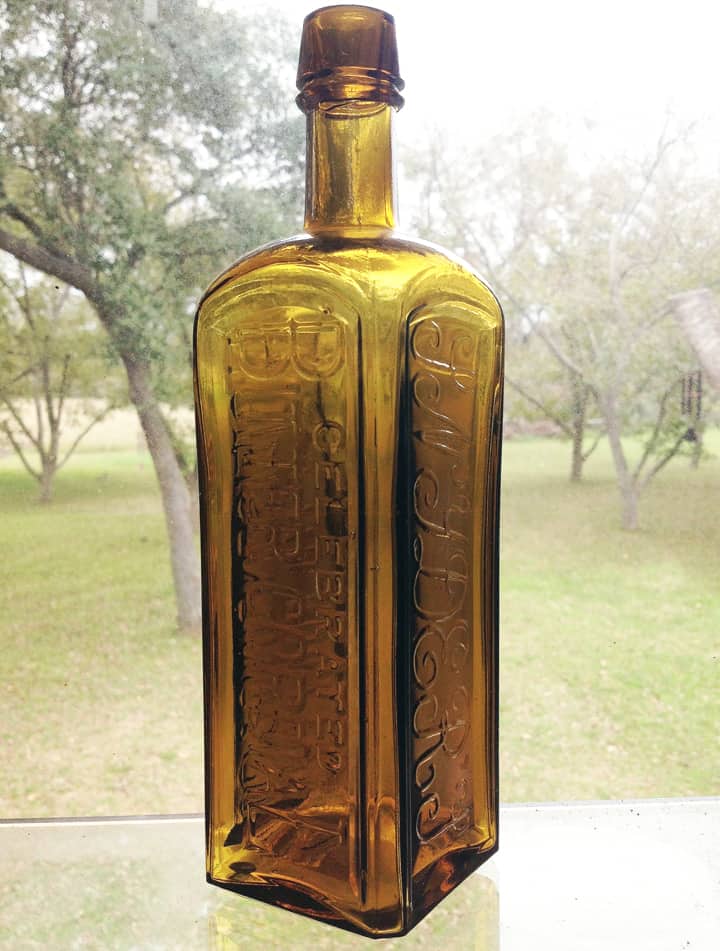 This is also a post that finds three (3) H. G. Leisenrings co-existing in the latter part of the 19th century. Unfortunately, I can not link the three, though it seems to be more than just a coincidence. The three Leisenrings include: 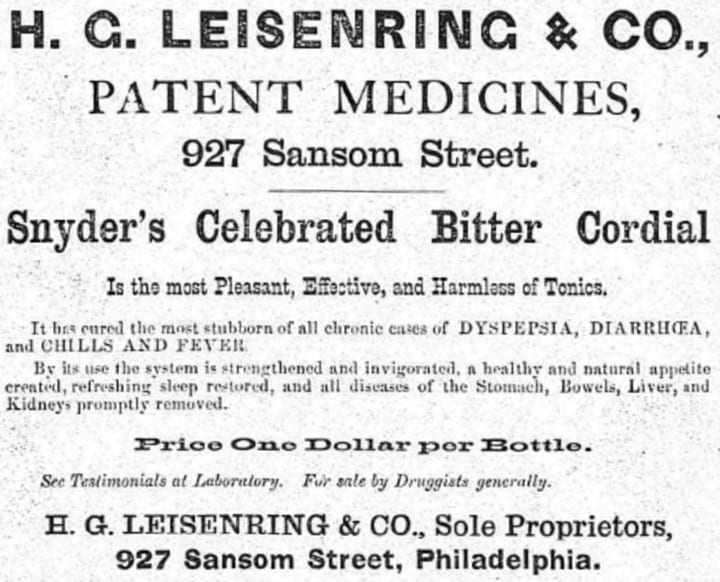 Harry was the sole proprietor of this product and operated as H. G. Leisenring & Co., patent medicines, 927 Sansom Street in Philadelphia. He marketed heavily during 1875 and 1876 in Philadelphia, New York and Indianapolis which surprised me. I believe the Snyder name came from Indianapolis as you will see from a few of the advertisements below. The Ring and Ham Bitters Bottles book notes the Philadelphia Public Ledger mentioning the product in 1869, which seems too early as absolutely nothing can be found prior to 1875. I am still looking. The book also notes a pontiled example. Somebody must have an example and I would love to add a picture to this post and quite frankly, have it in my collection. 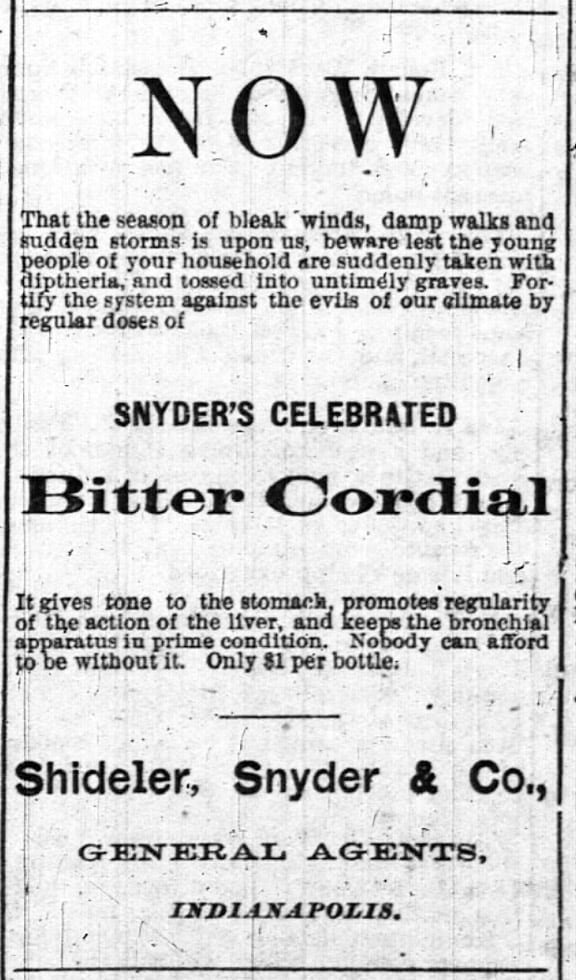 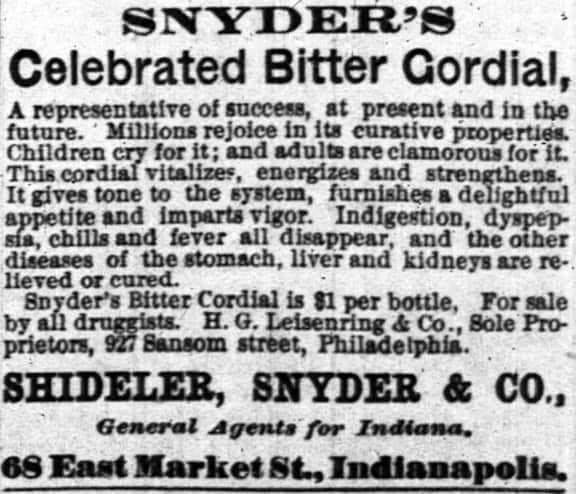 Another Outlet for Snyder – The Times (Philadelphia) 15 May 1875 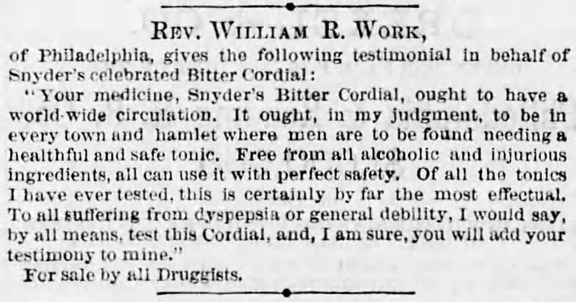 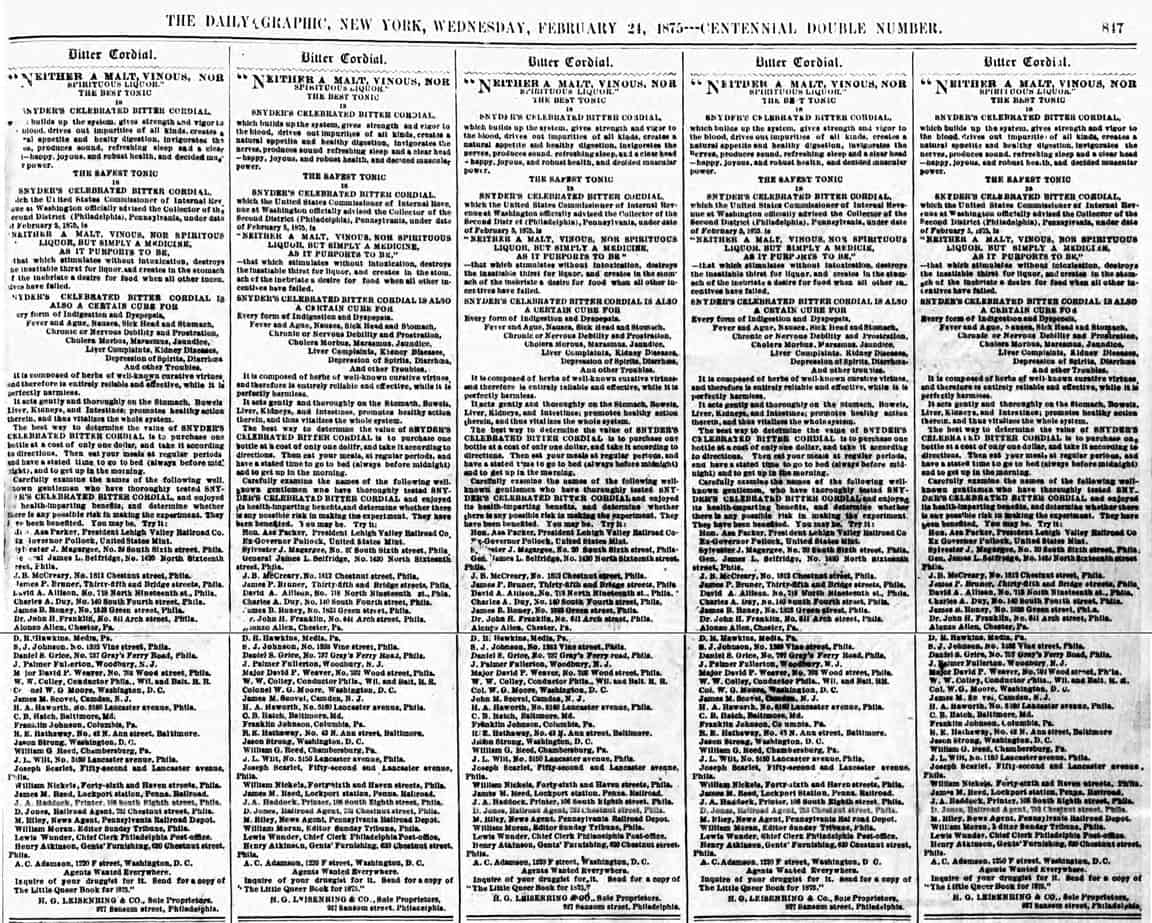 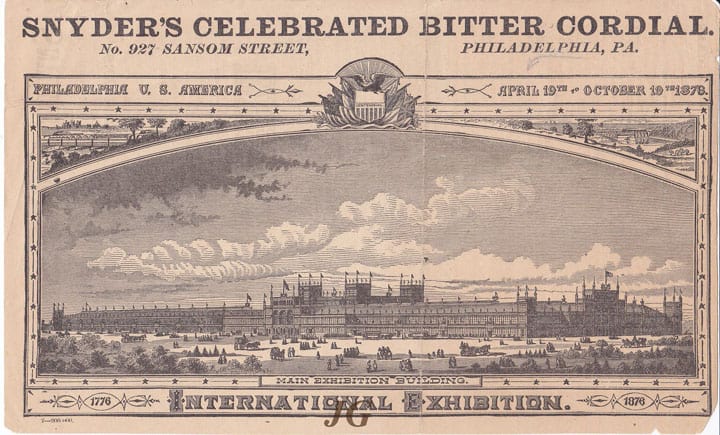 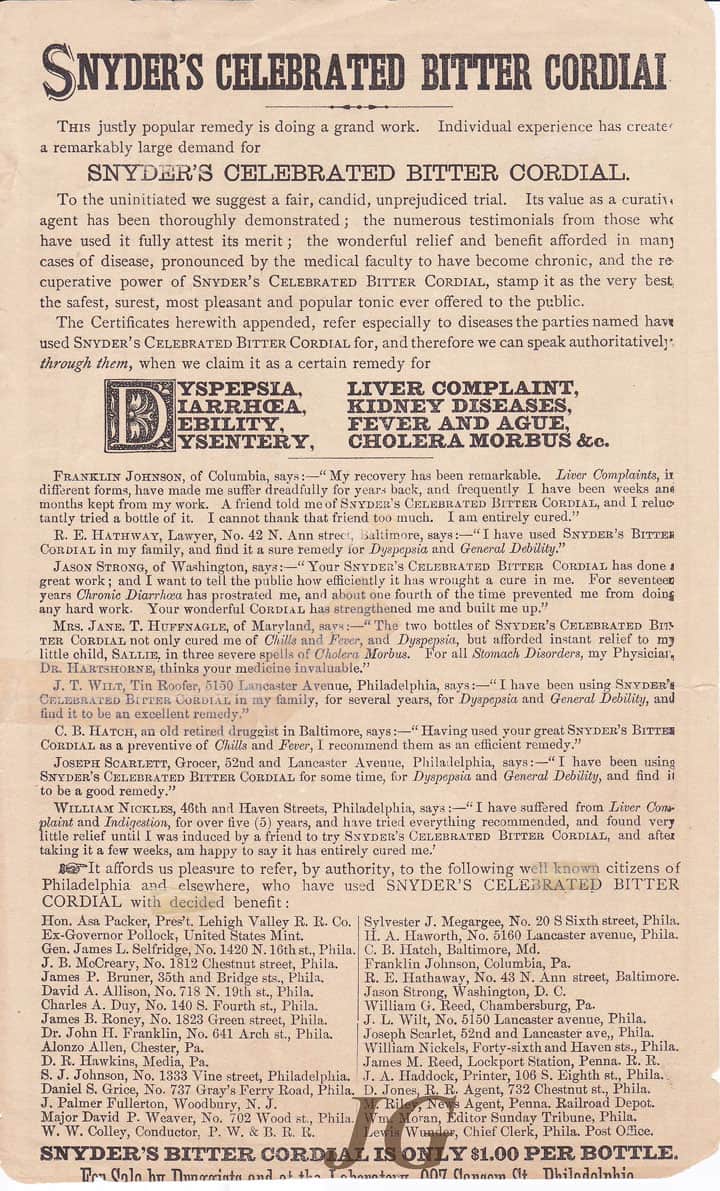 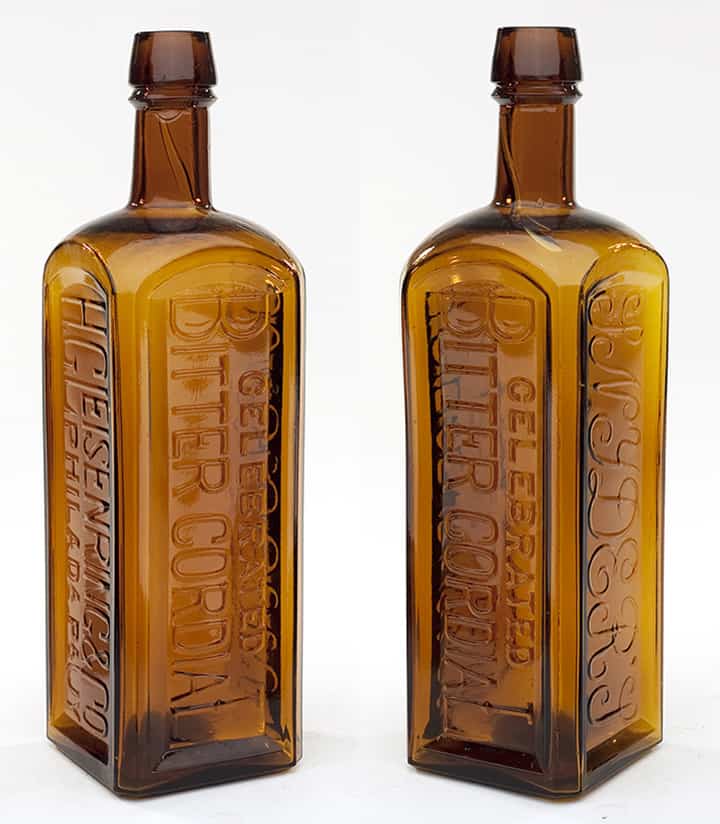 The Carlyn Ring and W.C Ham listing in Bitters Bottles is as follows:

1875: book, The Results of Snyder’s Celebrated Bitter Cordial Have Been Incalculable …

Read: In collecting Bitters, do you need the ‘S’? 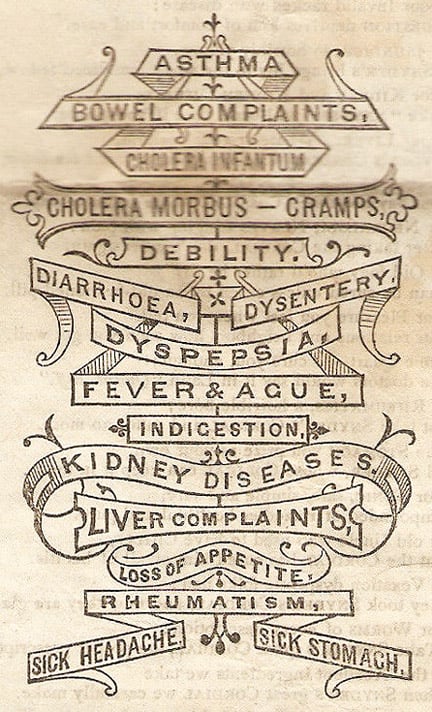 Harry priced his product at $1 a bottle and said it cured just about everything under the sun including asthma, bowel complaints, cholera infantum, cholera morbus, cramps, debility, diarrhea, dysentery, dyspepsia, fever & ague, indigestion. kidney disease, liver complaints, loss of appetite, rheumatism, sick headache and sick stomach. The product sold quite well during this period and had acquired a considerable reputation. Harry Leisenring even issued an almanac with the odd name, “The Little Queer Book for 1876“, “Snyder’s Celebrated Bitter Cordial” (see below). Go figure. 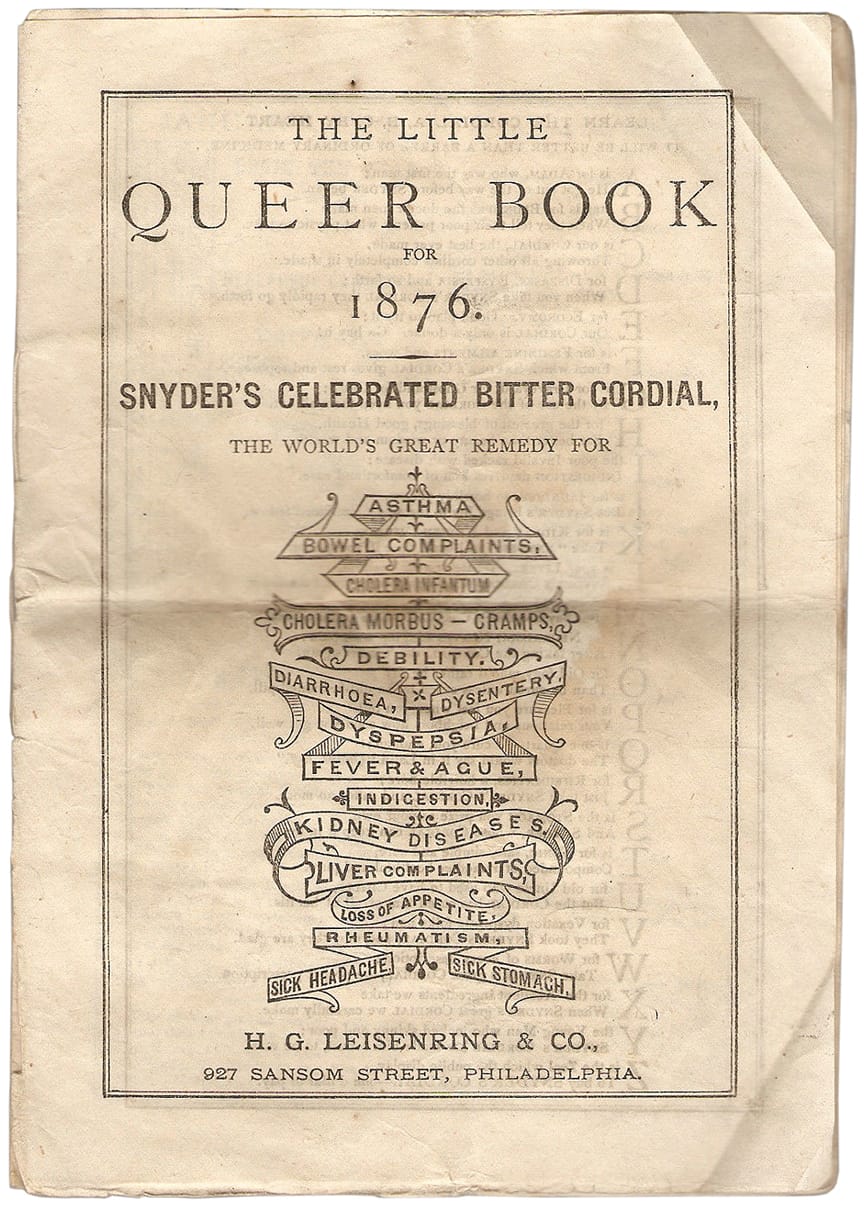 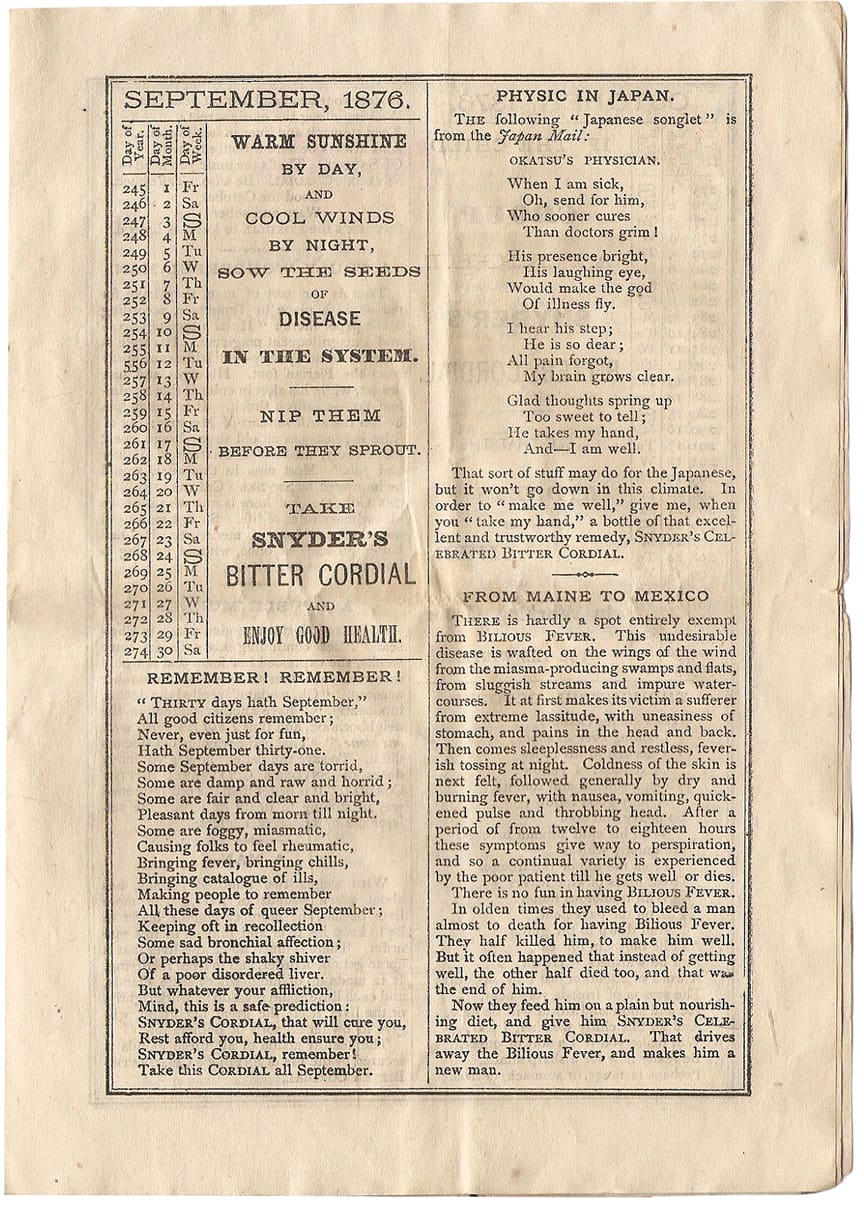 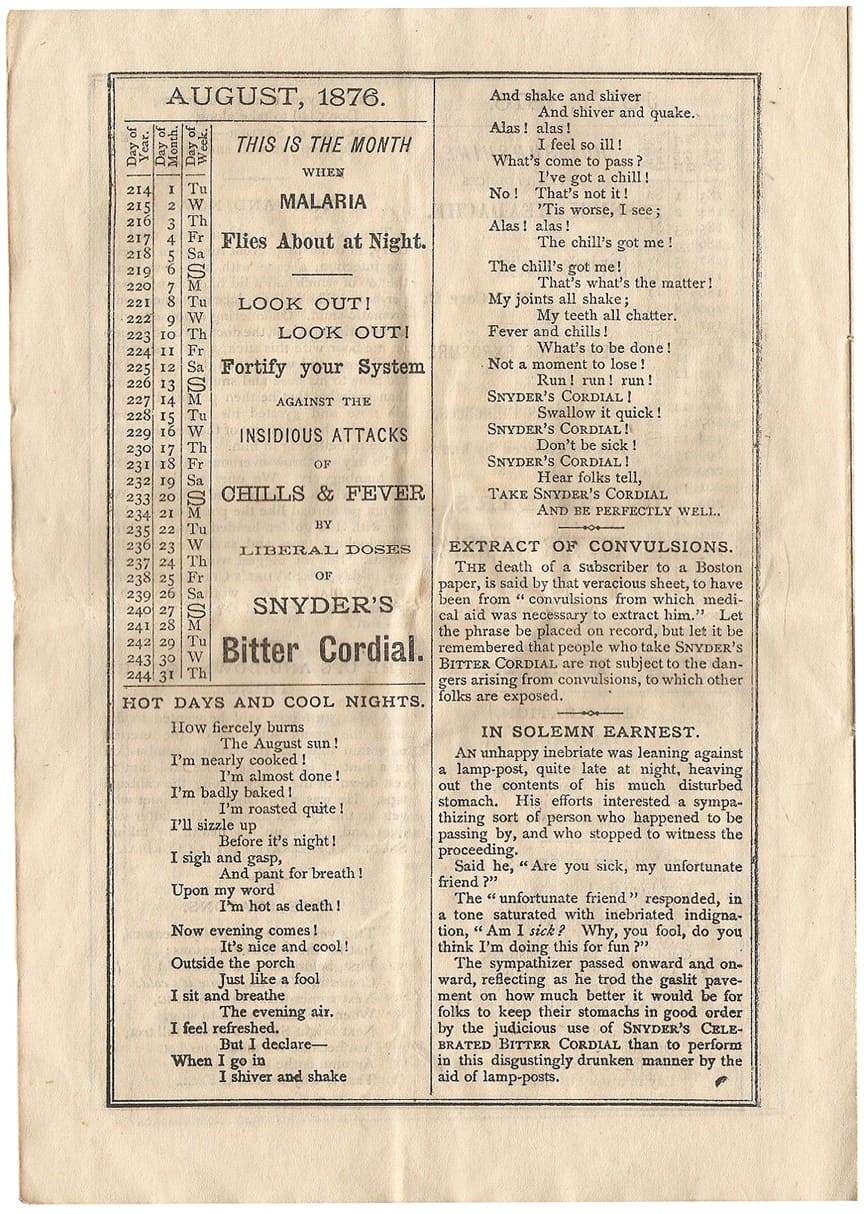 Also on May 23, H. G. Leisenring, Philadelphia, addressed USG. “The honor of your company is respectfully requested on the evening of May the 29th at 8 o’clock at the Hall 609 Chestnut St. north side, at the unveiling of the life-like representations of the Signers of the Declaration of Independence executed in wax full size, by distinguished artists…”

Harry then disappears when the financial component of the exhibit fails. I can not find but scarce information after this odd episode. Read article below.

This H. G. Leisenring (Henry) owned a very well established printing company located at 237 and 239 Dock Street in Philadelphia. Many important prints, on a national basis, can be traced back to Henry G. Leisenring. The time period seems to center around 1865. 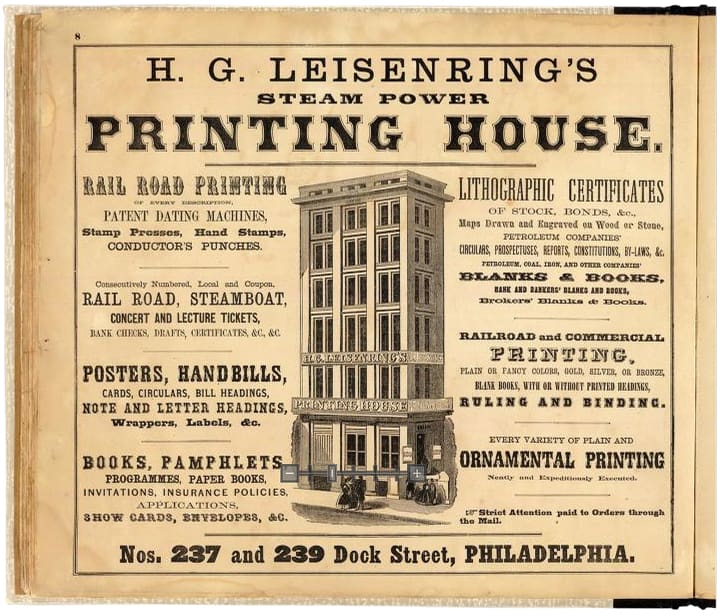 This H. G. Leisenring (also a Henry) was a physician practicing around 1900 in Wayne, Nebraska. He once tried using Carrier Pigeons to alert him of ailing patients that needed house calls (see advertisement below). He also had a number of patents including one for a surgical chair (see below), horse bridle-bit and Trap net.

P. S. LEISENRING, M. D., (Peter Shindel Leisenring) physician and surgeon, came to Omaha June 1, 1878, and has been in active practice ever since. He is a member of the State Medical Society and the Omaha Pathological Society. He was born in Sunbury, Pa., May 22, 1829, and educated at the Pennsylvania College, at Gettysburg, Pa. In March, 1852, he graduated from the Pennsylvania Medical College at Philadelphia and practiced at Altoona, Pa., before coming to Omaha.

He has been City Physician for the past three years and Secretary of the Board of Health. He was married at Hampton Furnace, Lehigh Co., Pa., January 31, 1856, to Emma E. Sigmund, a native of Berks County, Pa. They have ten children, Louisa S., Frederick G., Harry G. (could this be the Harry G. of the Snyder’s Bitter Cordial? Probably not.), Albert M., Lizzie N., Matilda, Bertha, Frank, Martin Luther and Sadie Bell. The Doctor is a professor of obstetrics and diseases of women in the Omaha Medical College. He is a Royal Arch Mason, K. of P., Medical Examiner for the U. B. of Pennsylvania, A. O. U. W., Northwestern A., F. & A. M. and Mutual Aid Society of Ohio. He is also a member of the Home Circle and Secretary of the Board of Health, director of the Y. M. C. A. and Douglas County Bible Society. 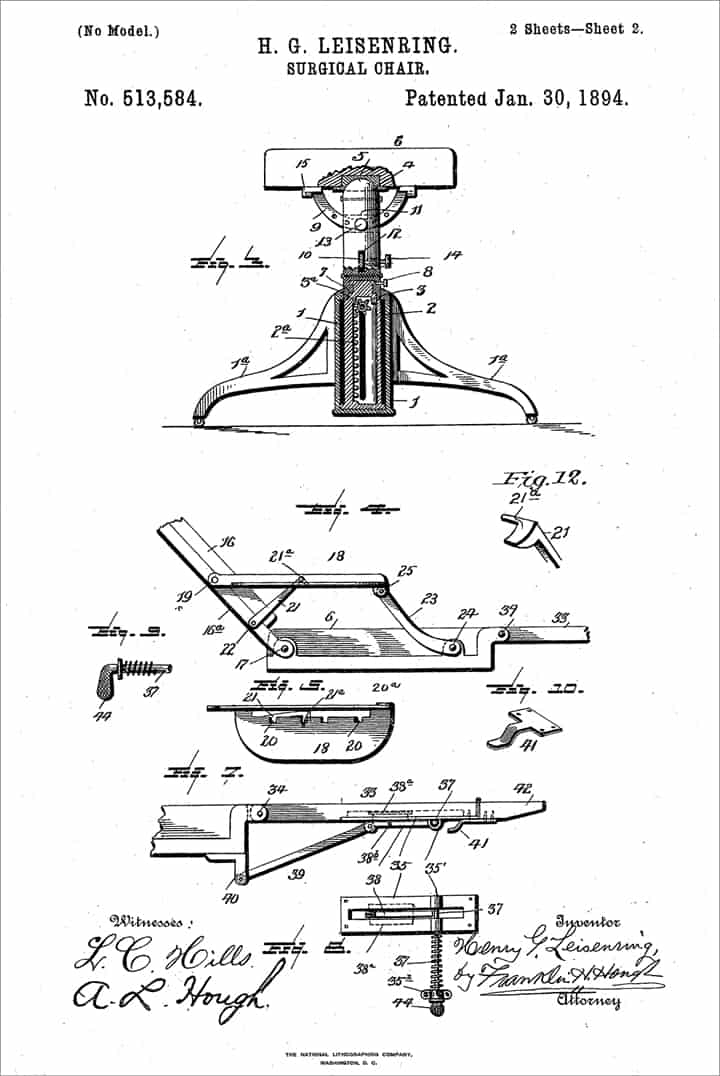 Ferdinand Meyer V is a native of Baltimore, Maryland and has a BFA in Fine Art and Graphic Design from the Kansas City Art Institute and School of Design. Ferdinand is the founding Principal of FMG Design, a nationally recognized design consultation firm. Ferdinand is a passionate collector of American historical glass specializing in bitters bottles, color runs and related classic figural bottles. He is married to Elizabeth Jane Meyer and lives in Houston, Texas with their daughter and three wonderful grandchildren. The Meyers are also very involved in Quarter Horses, antiques and early United States postage stamps. Ferdinand is the past 6-year President of the Federation of Historical Bottle Collectors and is one of the founding members of the FOHBC Virtual Museum.
View all posts by Ferdinand Meyer V →
This entry was posted in Advertising, Bitters, Cordial, eBay, History, Medicines & Cures, Questions, Technology and tagged bitter, centennial, Cordial, exposition, Harry, Henry, Indianapolis, Joe Gourd, Lehigh, Leisenring, Meyer, nebraska, omaha, Pennsylvania, Philadelphia, queer, Shideler, Snyder, Snyder's, wax. Bookmark the permalink.