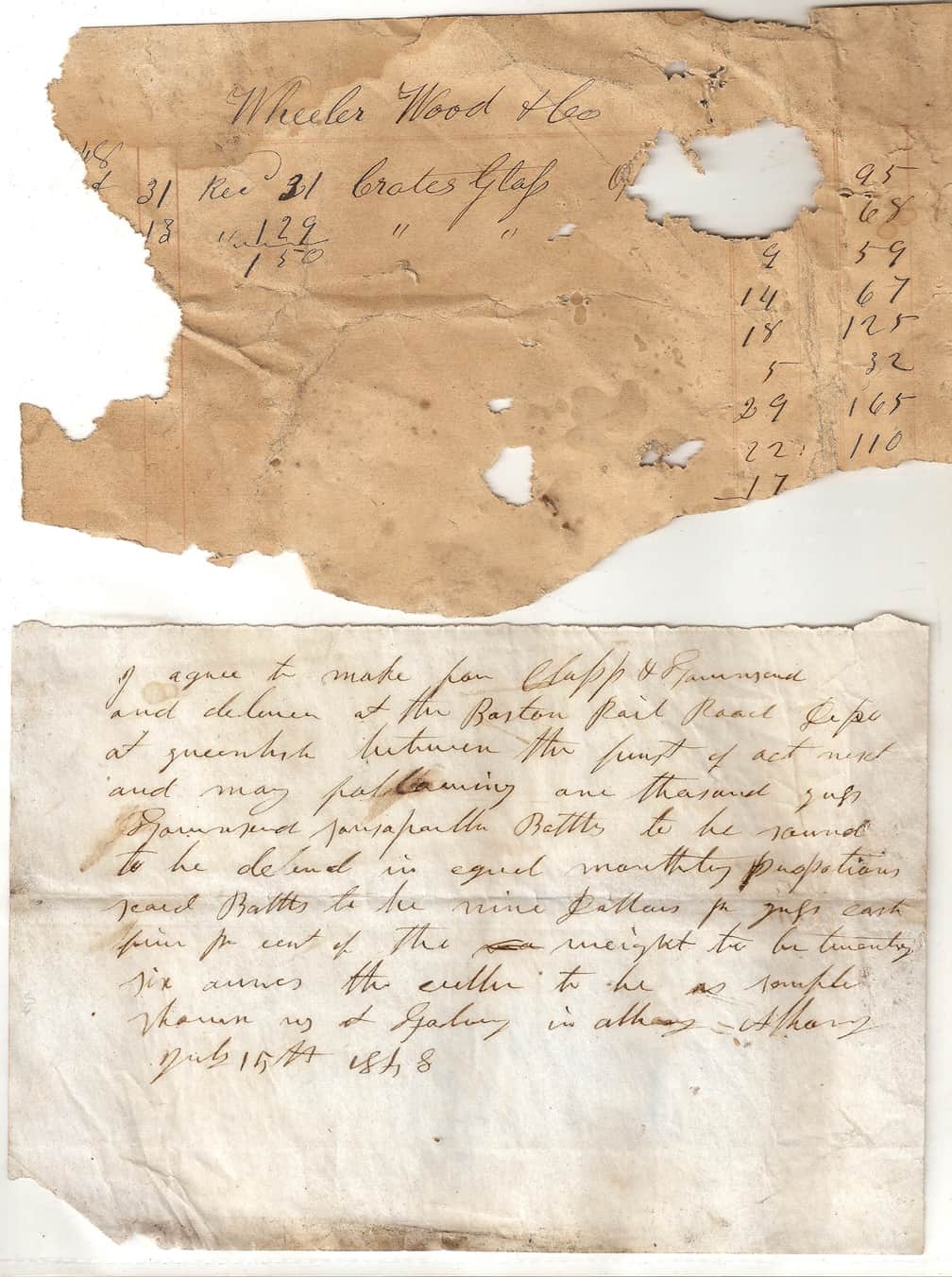 I agree to make for Clapp & Townsend and deliver at the Boston Rail Road Depot at Greenbush (NY) between the first of October next and May following. One thousand gross (of) Townsend Sarsaparilla Bottles to be sound, to be delivered in equal monthly proportions.

Hello, my name is Don Carpentier and I love your site!!! I live just outside of Albany, New York and I have been collecting bottles since I was 14 in 1966. In 1980, I stumbled over a dumpster behind 95 Herkimer Street in Albany’s ‘Pastures’ District. The house had been built by and was the home of Ruell Clapp of Clapp & Townsend Sarsaparilla fame.

The city had taken the roof off the house to repair it, and as part of the project, they shoveled the contents of the attic into the dumpster. It was a 3-story drop so some of the material was on the ground around the dumpster. That’s what I noticed first. After collecting every shred of material I ended up with over 1,000 documents from Ruell Clapp’s business’s including a huge pile of documents from Clapp & Townsend. I have kept them safe for all these years and recently started to clean the dirt and dust off and put them in archival sleeves.

There are letters from Dr. Dyott asking for 1,000 boxes of Sarsaparilla for his store in Philadelphia, Dr. Clark in Boston, all his suppliers of material for the medicine, an actual handwritten copy of the recipe and notations about how many boxes it takes to ship a batch and how many board feet it takes to make them, and lists of anyone who was selling the product anywhere in the world. Just about everything they did to run the business is in the papers.

There is some really important information in them that I have started to go through. I found 2 documents recently that I need help with and your readers might be just the ones to help. One is a contract for making 144,000 thousand bottles over a 6 month period from October 1848 to May 1849. Everything is there except the name of the glass company in New England. The other scrap of mouse chewed paper is from Wheeler, Wood and Co. For creates of glass shipped to Townsend in 1848. As there were many factories making glass for them it isn’t an easy task to sort out. I am sending you a scan of the originals and a typed page of the text as best I can read it. If this is of any interest to you let me know,

I found 2 documents recently that I need help with and your readers might be just the ones to help. 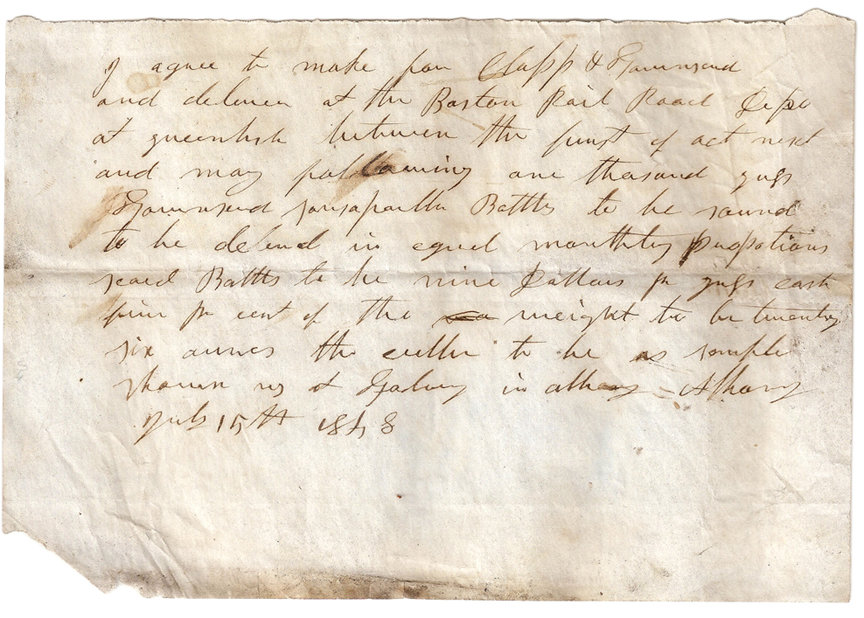 I agree to make for Clapp & Townsend and deliver at the Boston Rail Road Depot at Greenbush (NY) between the first of October next and May following. One thousand gross (of) Townsend Sarsaparilla Bottles to be sound, to be delivered in equal monthly proportions. Said bottles to be nine Dollars pr gross, cash. Five pr cent of the weight to be twenty six ounces. The culls to be a sample shown (?) at Factory in albany–Albany 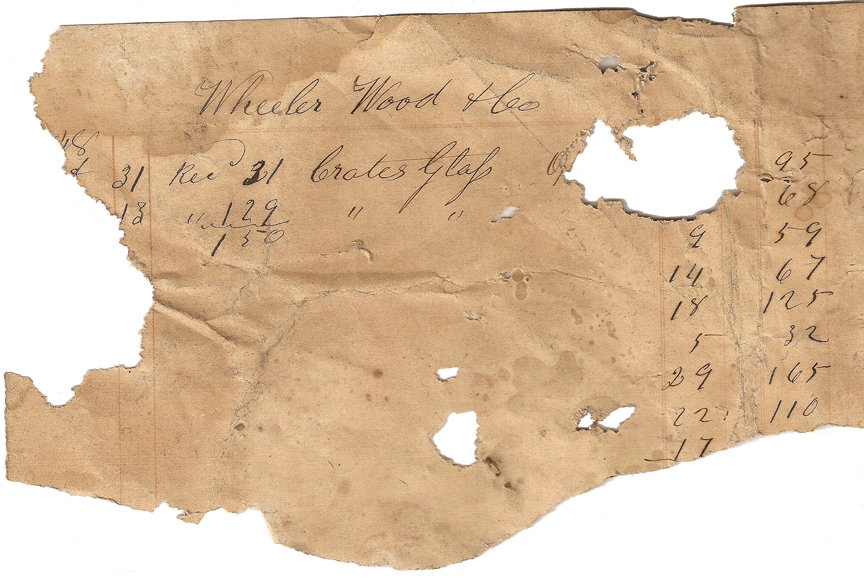 Here’s some information regarding the Clapp & Townsend post:  f

This MAY indicate the Albany Glass Works as the maker. The date is correct for this works. I can’t substantiate this based on the information given however.

To confuse things, Wheeler, Wood & Co. were NYC purveyors of stationary and paper goods. Advertisements below. 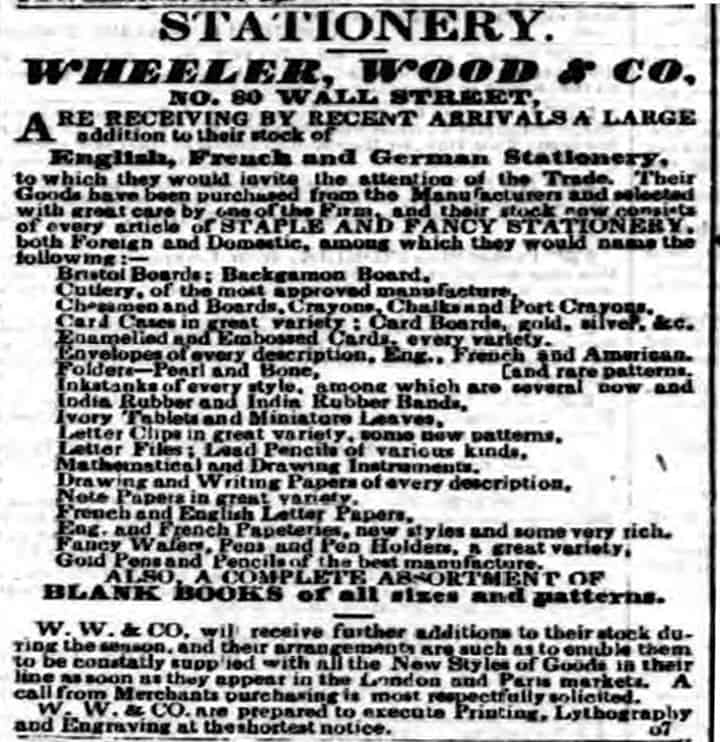 Ferdinand Meyer V is a native of Baltimore, Maryland and has a BFA in Fine Art and Graphic Design from the Kansas City Art Institute and School of Design. Ferdinand is the founding Principal of FMG Design, a nationally recognized design consultation firm. Ferdinand is a passionate collector of American historical glass specializing in bitters bottles, color runs and related classic figural bottles. He is married to Elizabeth Jane Meyer and lives in Houston, Texas with their daughter and three wonderful grandchildren. The Meyers are also very involved in Quarter Horses, antiques and early United States postage stamps. Ferdinand is the past 6-year President of the Federation of Historical Bottle Collectors and is one of the founding members of the FOHBC Virtual Museum.
View all posts by Ferdinand Meyer V →
This entry was posted in Digging and Finding, Early American Glass, Ephemera, Glass Companies & Works, Glass Makers, History, Questions, Sarsaparilla and tagged Albany, Clapp & Townsend, Don Carpentier, Dr. Dyott, dumpster, Greenbush, New England, New York, Ruell Clapp, Sarsaparilla, Townsend, Wheeler, Wolff, Wood and Co.. Bookmark the permalink.