Christian Xander and his Melliston Bitters

He was a member of the Lutheran Church, and for many years led the singing in the congregation. He had an excellent voice and was very fond of singing; yea, he was proud of his musical talents. When quite a boy I recollect of hearing him tell how he used to take his “bitters,” a common thing in those days, before going to church, “to clear out his throat,”- and that then his voice would sound clear and soft as the tones of a little organ.

History of the Eberharts in Germany and the United States

Well, it happened again. I was off looking through New York Directories for Wheat Bitters and up pops a link leading to an advertisement for German Aromatic Bitters (see below) from Washington, D.C. That sure didn’t ring a bell so I went off on a tangent looking for more information. I certainly had not heard of Christian Xander.

As it turns out, there is quite a bit of good information available. We will include a digging article called Bottles from our Nation’s Capital by Andy Goldfrank and follow up with an article called Wine Made From Manassas Grapes Wins Bronze Metal at the 1900 Paris Exposition by Ray Olszewski. Both are represented further below.

The only reference I can find in the Ring & Ham Bitters Bottles book is as follows:

There are some nice advertisements starting as early as 1878 in Washington, D.C. where Christian Xander was selling his Melliston Bitters and German Aromatic Bitters which is probable the same product. 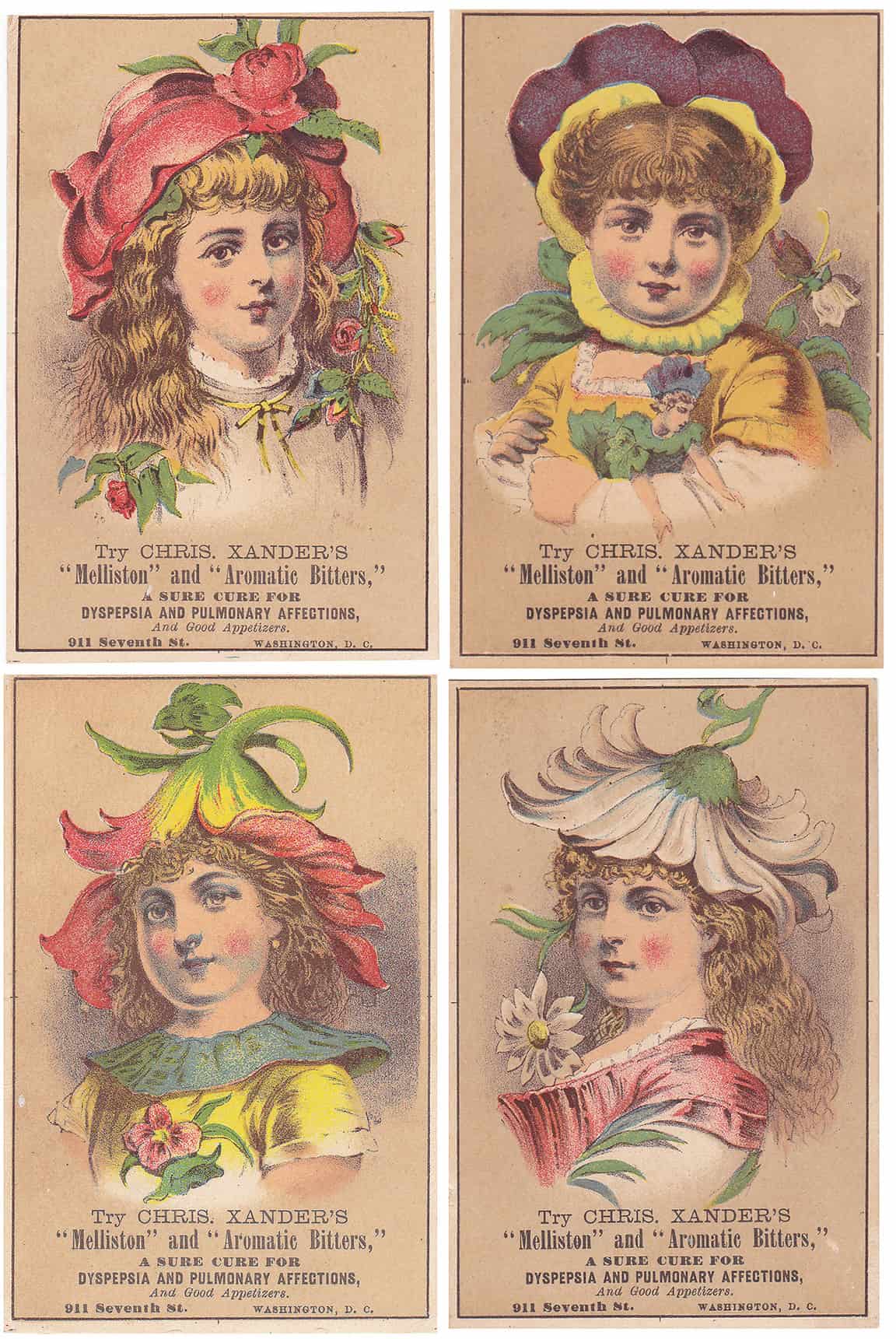 1864 – Xander emigrated to the District of Columbia.

1872 – Xander listed himself as a wholesale liquor dealer in 1872 census, but as early as 1872, he was sufficiently established as a merchant to act as an incorporator for the Boundary & Silver Springs Railway Co, a trolley system for the District of Columbia, one of a group of visionary businessmen willing to invest to build the latest transportation improvement for the city of Washington.

1896 – As a wholesaler, Xander gave a plug to one of his domestic champagne manufacturers in 1896, by issuing a hearty recommendation of its product as equal to the more expensive imported champagnes.

1900 – Xander was willing to carry the challenge to foreign imports even further by displaying his own quality wines at the Paris Exposition of 1900.

1905 – Xander was regarded as a significant enough citizen to serve on one of the committees charged with organizing the Inauguration of President Theodore Roosevelt which took place on March 4th of that year.

1908 – Xander died apparently suddenly on March 7, 1908 at age 71 and was buried on March 10, 1908. His widow continued to make donations of wine to one of the local charity hospitals for years after his death.

Ads proclaiming the excellence of products of local German businesses, such as Christian Xander’s “Wild Cherry Bitters (for the stomach)” and ads from non-German establishments like the “5 Cents Savings Bank”

Read Below: Bottles from our Nation’s Capital by Andy Goldfrank 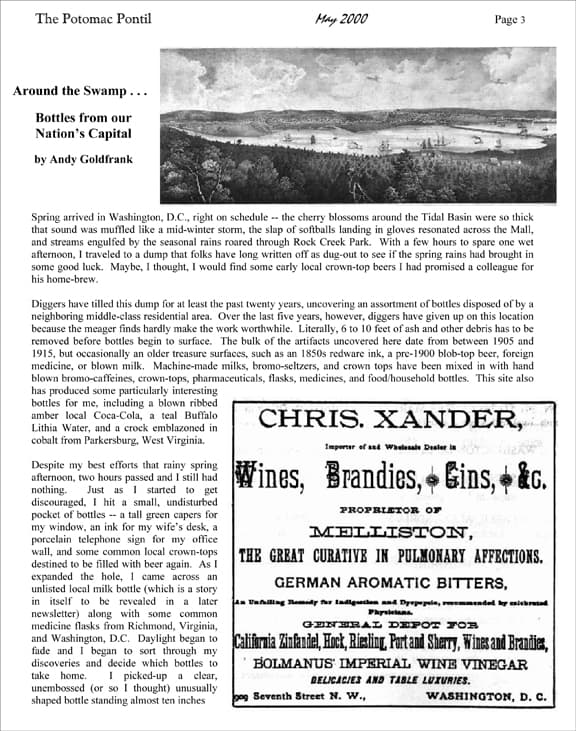 Read Below: Wine Made From Manassas Grapes Wins Bronze Metal at the 1900 Paris Exposition by Ray Olszewski 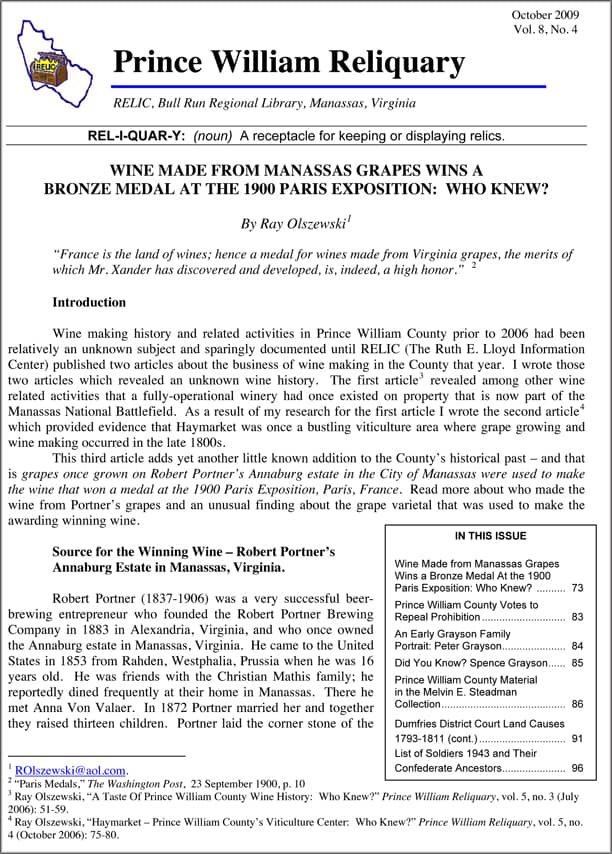 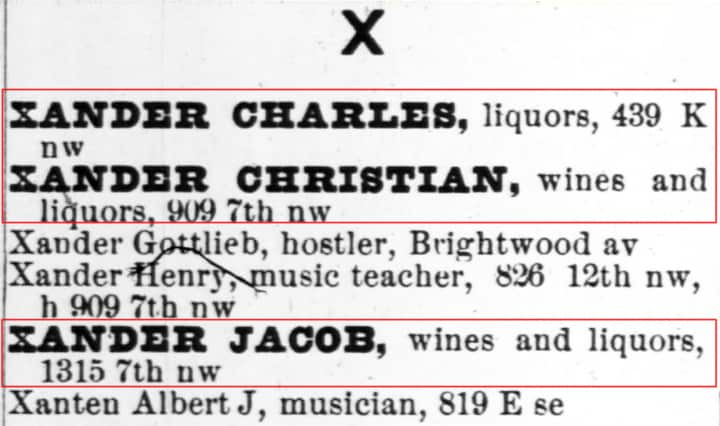 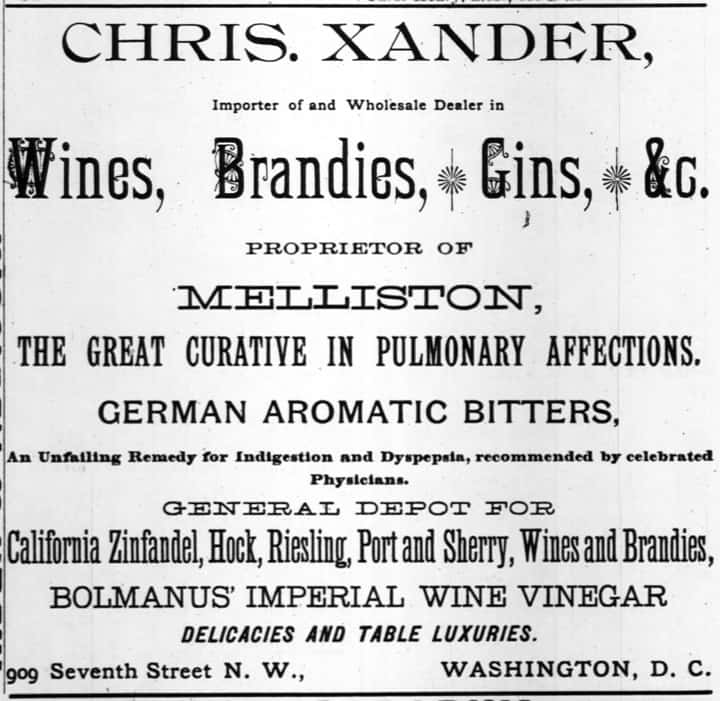 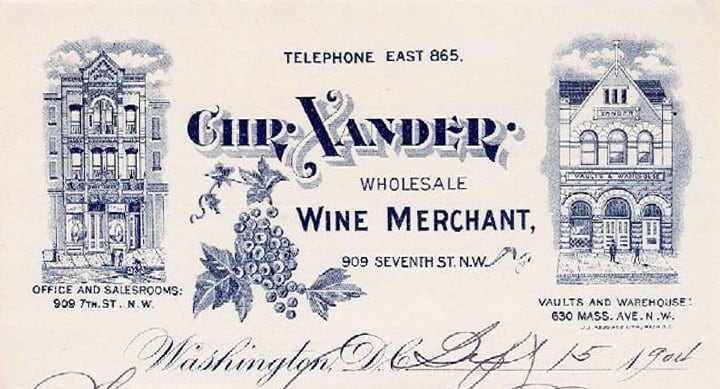 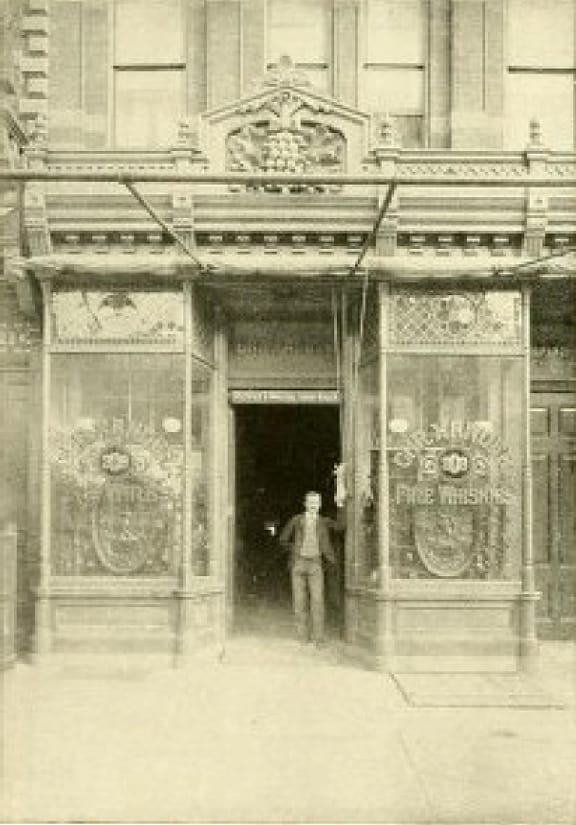 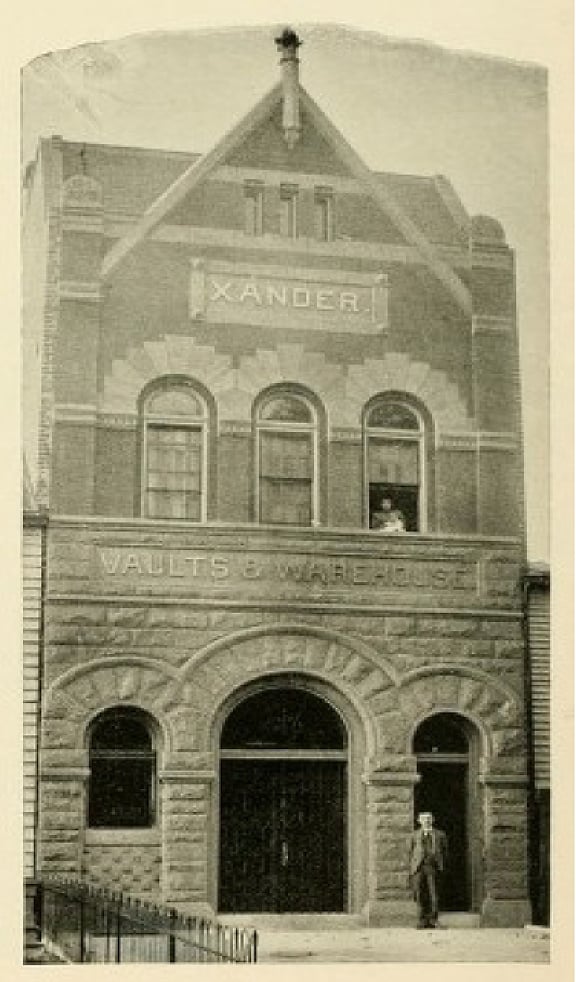 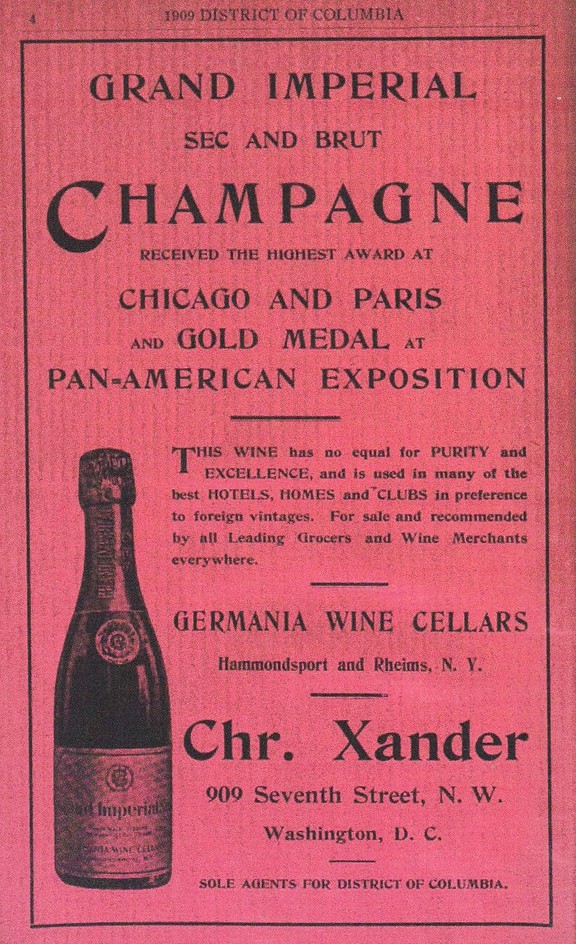 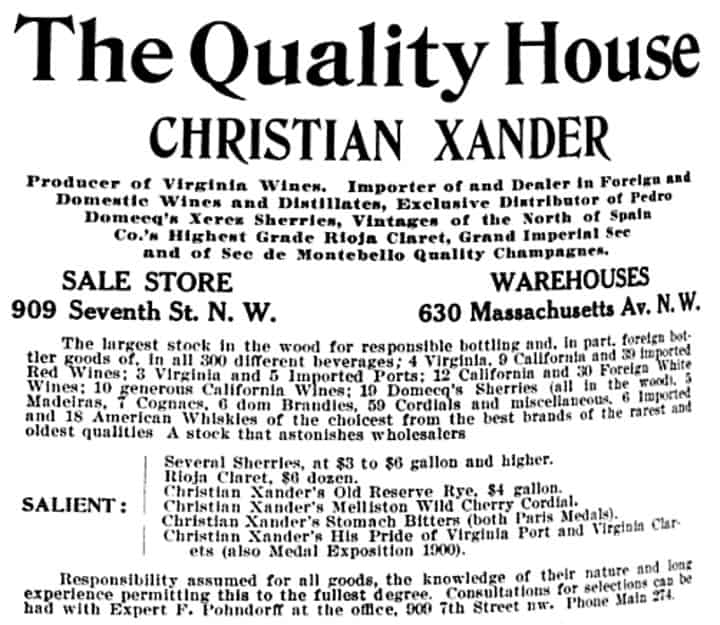 The Quality House, Christian Xander advertisement – Boyd’s Directory of the District of Columbia – 1909

Ferdinand Meyer V is a native of Baltimore, Maryland and has a BFA in Fine Art and Graphic Design from the Kansas City Art Institute and School of Design. Ferdinand is the founding Principal of FMG Design, a nationally recognized design consultation firm. Ferdinand is a passionate collector of American historical glass specializing in bitters bottles, color runs and related classic figural bottles. He is married to Elizabeth Jane Meyer and lives in Houston, Texas with their daughter and three wonderful grandchildren. The Meyers are also very involved in Quarter Horses, antiques and early United States postage stamps. Ferdinand is the past 6-year President of the Federation of Historical Bottle Collectors and is one of the founding members of the FOHBC Virtual Museum.
View all posts by Ferdinand Meyer V →
This entry was posted in Advertising, Article Publications, Bitters, Cordial, History, Liquor Merchant, Medicines & Cures, Wine & Champagne and tagged Andy Goldfrank, Aromatic, bitters, Champagne, Christian, German, grapes, liquor, Melliston, Washington D.C., Wine, Xander. Bookmark the permalink.