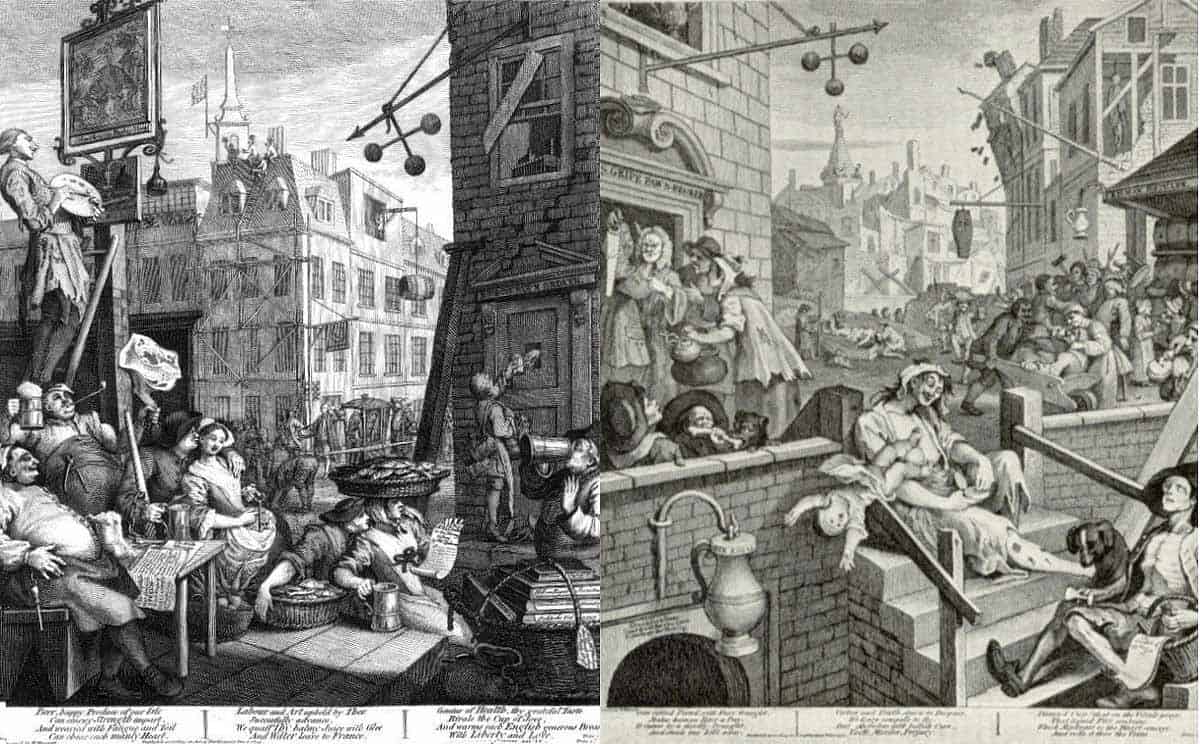 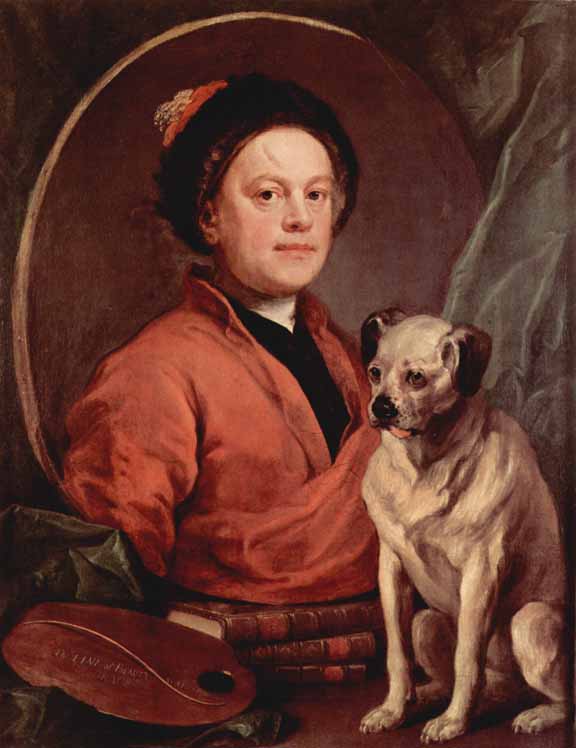 Beer Street and Gin Lane are two prints issued in 1751 by English artist William Hogarth in support of what would become the Gin Act.

Designed to be viewed alongside each other, they depict the evils of the consumption of gin as a contrast to the merits of drinking beer. At almost the same time and on the same subject, Hogarth’s friend Henry Fielding published An Inquiry into the Late Increase in Robbers. Issued together with The Four Stages of Cruelty, the prints continued a movement started in Industry and Idleness, away from depicting the laughable foibles of fashionable society (as he had done with Marriage à-la-mode) and towards a more cutting satire on the problems of poverty and crime.

On the simplest level, Hogarth portrays the inhabitants of Beer Street as happy and healthy, nourished by the native English ale, and those who live in Gin Lane as destroyed by their addiction to the foreign spirit of gin; but, as with so many of Hogarth’s works, closer inspection uncovers other targets of his satire, and reveals that the poverty of Gin Lane and the prosperity of Beer Street are more intimately connected than they at first appear. Gin Lane shows shocking scenes of infanticide, starvation, madness, decay and suicide, while Beer Street depicts industry, health, bonhomie and thriving commerce, but there are contrasts and subtle details that some critics believe allude to the prosperity of Beer Street as the cause of the misery found in Gin Lane. [Wikipedia]

Listen to NPR: ‘The Book Of Gin’ Distills A Spirited History 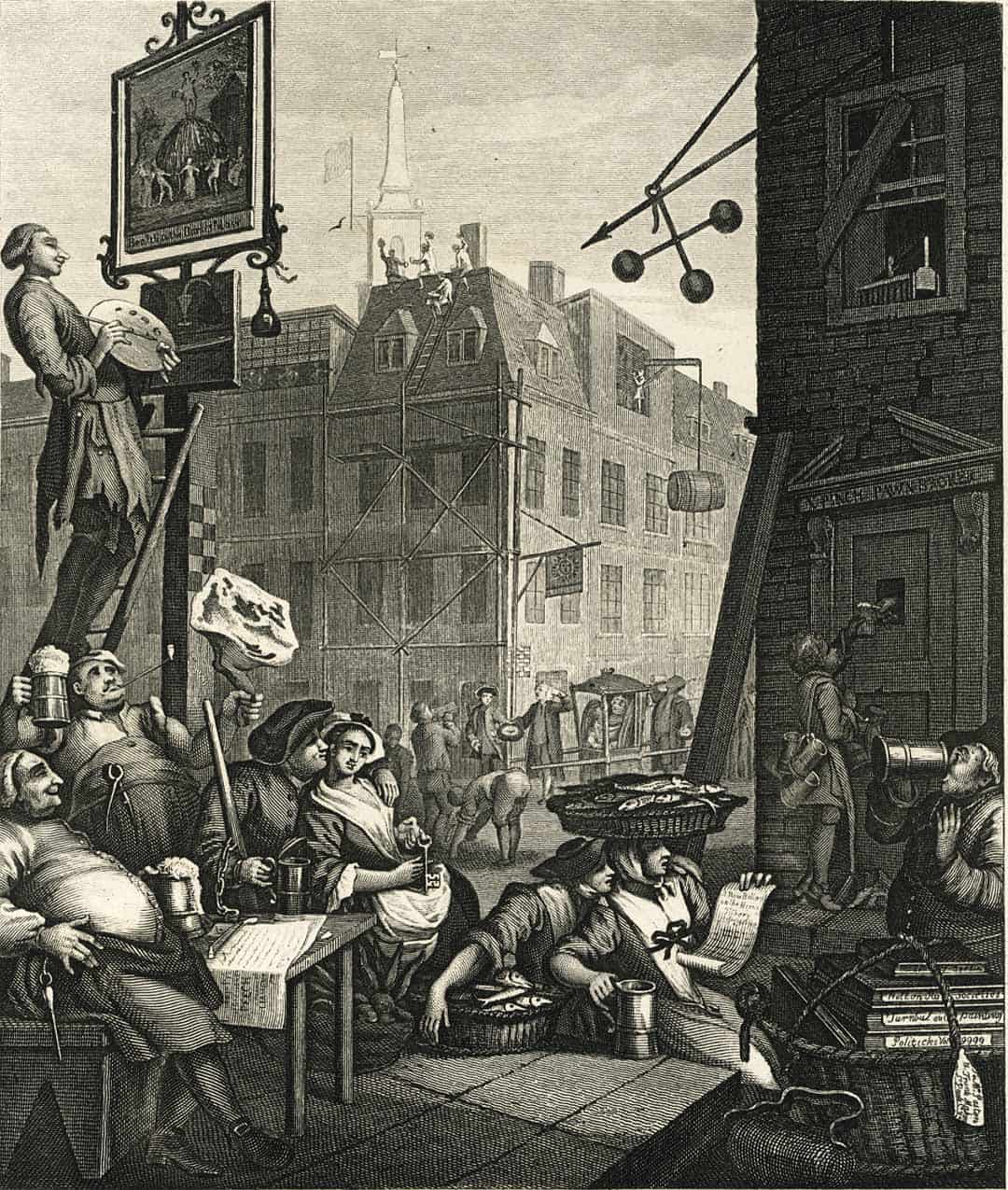 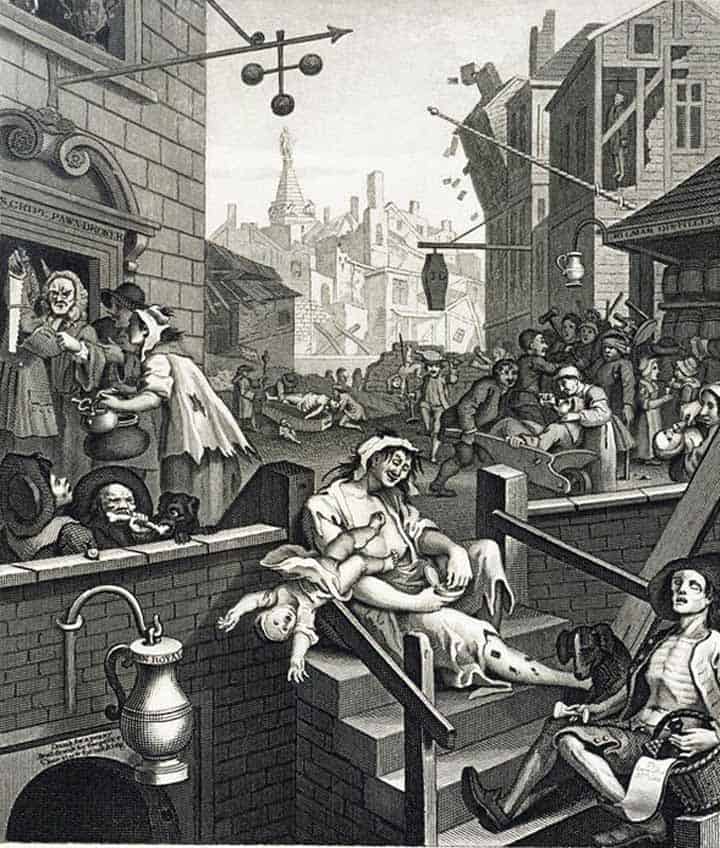 Ferdinand Meyer V is a native of Baltimore, Maryland and has a BFA in Fine Art and Graphic Design from the Kansas City Art Institute and School of Design. Ferdinand is the founding Principal of FMG Design, a nationally recognized design consultation firm. Ferdinand is a passionate collector of American historical glass specializing in bitters bottles, color runs and related classic figural bottles. He is married to Elizabeth Jane Meyer and lives in Houston, Texas with their daughter and three wonderful grandchildren. The Meyers are also very involved in Quarter Horses, antiques and early United States postage stamps. Ferdinand is the past 6-year President of the Federation of Historical Bottle Collectors and is one of the founding members of the FOHBC Virtual Museum.
View all posts by Ferdinand Meyer V →
This entry was posted in Advice, Ales & Ciders, Art & Architecture, Breweriana, Gin, History, Spirits and tagged Beer, Gin, William Hogarth. Bookmark the permalink.