The S & W or W & S or whatever Monogram Bottle 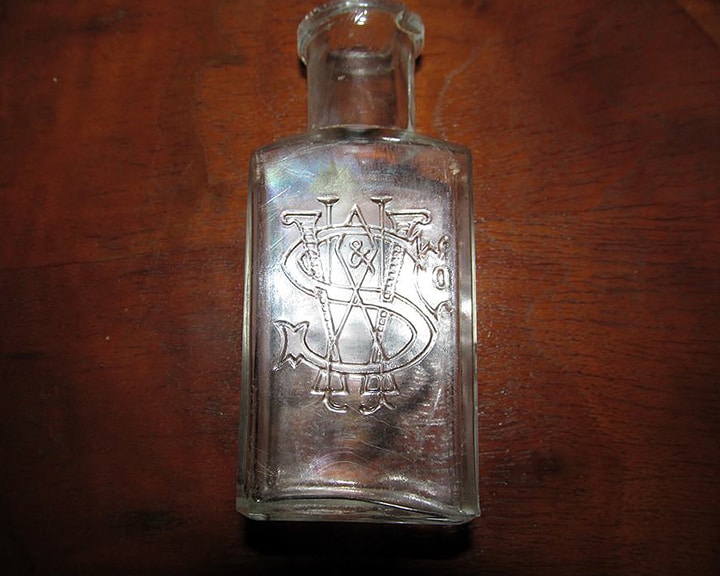 Brenda Dacus Crosby posted this picture on Peachridge asking for help identifying a bottle. She said she was new at bottle collecting but had been led to believe this was a Smith & Wesson gun oil bottle,

The S & W or W & S or whatever Monogram Bottle

Brenda Dacus Crosby posted the above photograph of a bottle on the PRG facebook page asking for help identifying the monogram. A monogram is a motif made by overlapping or combining two or more letters or other graphemes to form one symbol.

She said she was new to bottle collecting but had been led to believe that this was a Smith & Wesson gun oil bottle. I felt compelled to help her out as I suspected this was not a Smith & Wesson logo on the bottle. Their logo is quite different (see below). 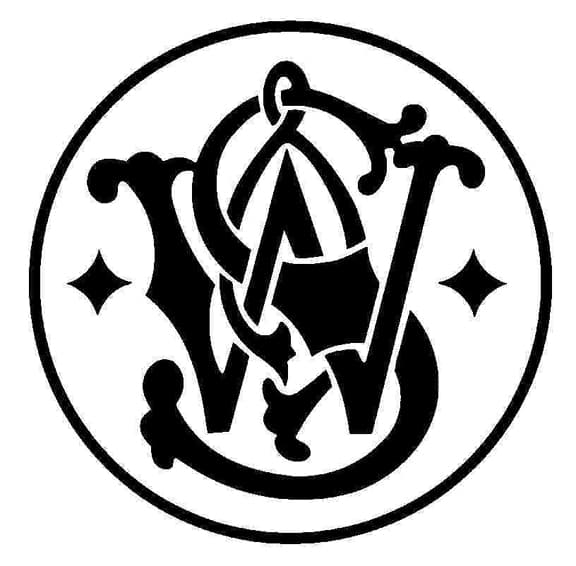 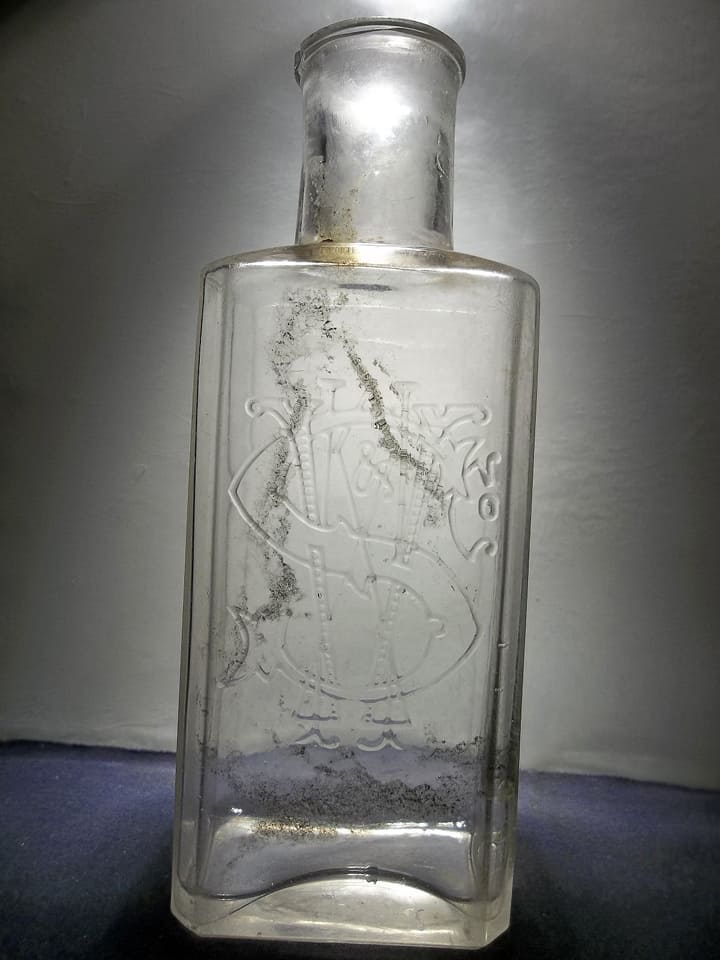 I’m not buying the Smith & Wesson theory until a labeled example shows up. If you look closely, the logos are just too different. I am in the brand identity business and when you have a logo like Smith & Wesson, and you stick with it for over a hundred years, then why would you use something similar on your bottle? That’s just it, you don’t. Sure it could be an error, there are spelling errors on lots of bottles. Again, why go to all the trouple of putting the wrong, albeit similar mark on your bottle? 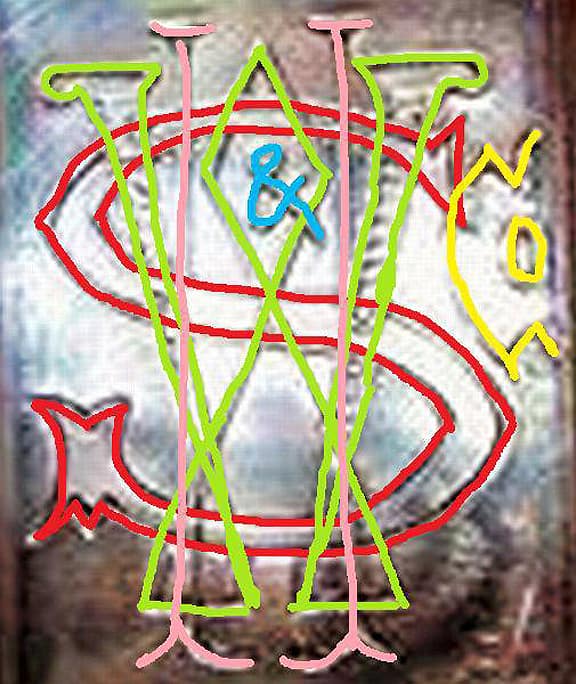 I was impressed with the Jim Eifler quick study of the bottle monogram (see above). This helps isolate the typographic forms. As I mentioned to Brenda, I see equine forms like a horses head (yellow lines) and a riding crops (pink). Maybe this is a horse med? Others think a local druggist bottle with the initials of the maker. This sounds good too. 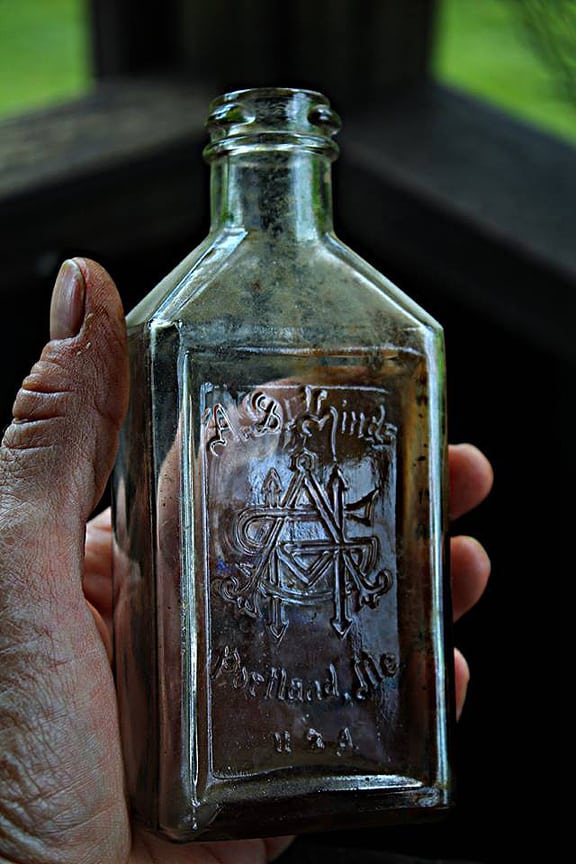 I dug three of them. same logo I think but earlier? It’s A.S. HINDS and it is a lady’s almond lotion. Also says Portland and Maine – Keefert Peggy

Another similar bottle was posted with yet another similar mark (see above). This being an A. S. Hinds almond lotion from Portland, Maine. Almost since the beginning of typography and symbology, people have been overlapping and intertwining letter forms. No telling what this mark is.

Can one of you identify the mark and bottle?

Smith and Wesson just emailed me this, I thought I would share with you all…..

It seems that I have seen one of those before, and that it wasn’t connected to the Smith & Wesson firearms people at all. Since I cannot remember the particulars about it, I have sent contact to some people that I believe can explain it for you (and me). As soon as I get answers, I will send the info along to you. It looks like a neat piece of history that you have there.

Ferdinand Meyer V is a native of Baltimore, Maryland and has a BFA in Fine Art and Graphic Design from the Kansas City Art Institute and School of Design. Ferdinand is the founding Principal of FMG Design, a nationally recognized design consultation firm. Ferdinand is a passionate collector of American historical glass specializing in bitters bottles, color runs and related classic figural bottles. He is married to Elizabeth Jane Meyer and lives in Houston, Texas with their daughter and three wonderful grandchildren. The Meyers are also very involved in Quarter Horses, antiques and early United States postage stamps. Ferdinand is the past 6-year President of the Federation of Historical Bottle Collectors and is one of the founding members of the FOHBC Virtual Museum.
View all posts by Ferdinand Meyer V →
This entry was posted in Druggist & Drugstore, Questions and tagged A. S. Hinds, Brenda Dacus Crosby, Jim Eifler, Logo, Michael Urbansky, monogram, Smith & Wesson. Bookmark the permalink.