In my quest to better understand Texas medicine and bitters history, Texas medicine collector Brad Seigler sent me this picture of a cobalt blue E. C. PATTON / OAK CLIFF / DALLAS, TEXAS bottle saying it was somewhat akin to the Holy Grail (with the exception of the cobalt blue Dog and Cat Hospital bottle. That comment prompted a little research on Dr. Patton.

What I find interesting here is the abundant information on Dr. E. G. Patton, his brother J. C. G. R. Patton, his influence in the founding of Oak Cliff in Dallas and a fire that once destroyed six buildings of Dr. Patton’s. No wonder one can not find many examples of his bottles.

where he studied medicine under Dr. Phillips and afterward under Dr. Clopton of Douglasville; worked in a drug store in Jefferson.

PATTON, Dr. E. G. – Age 77 years, for many years a citizen of Dallas, died at his home at Cockrell Hill station on the Fort Worth inter urban, from a stroke he had last December. He came to Dallas from Sulphur Springs. He was born in Troup County, Georgia, in 1838. His father was a Presbyterian preacher. When a lad of 16, he came to Texas and made his home with his brother, Rev. J. C. G. R. Patton, at Linden, Texas, where he studied medicine under Dr. Phillips and afterward under Dr. Clopton of Douglasville; worked in a drug store in Jefferson. With the assistance of his brother, J. C. G. R. Patton, he attended the University of Louisiana, graduating in 1858.

He was an army surgeon during the entire time of the Civil War.

He began practice of medicine in Hopkins County, Texas, and remained in the general practice for 18 years, afterward establishing a drug store at Sulphur Springs where he accumulated considerable property. He was an army surgeon during the entire time of the Civil War. In 1888 he came to Dallas where he established the Patton-Worsham Drug Co., leading wholesale drug house. He established the Patton’s Institute in Oak Cliff, a school for boys and girls. He was married in Hopkins County to Miss
Texana Boyd who was born and reared in that county and who died in 1901 in Dallas county. He never had children. Funeral services will be held at his home at Cockrell Hill; burial beside his wife in Oak Cliff cemetery. (S. S. Gazette, Fri., Nov. 19, 1915) – [USGenWeb Archives]

Attached is a photograph of the Reverand James C G R Patton with wife Sarah and Dr. Edward G. Patton. Presumed that this photo was taken in Johnson County, Texas. This photograph was found in the Johnson County Century Re-Call, 1854-1954 program, page 19.

The unidentified man noted in the caption in the photo above is the brother of Rev. Patton (holding Bible on the left). His name is Dr. Edward G. Patton. There is a photo of Dr. Patton with his obituary in the archives of the Dallas Morning News dated Nov. 12, 1915. Below is information concerning Dr. Patton who lived in Cass County when he and his brother first came to Texas.

Dr. E. G. Patton dies after long illness. Well-known in Dallas and Sulphur Springs as Druggist, Charity worker and Educator. Dr. E. G. Patton, 77 years old, for many years a prominent citizen of Dallas, died late yesterday afternoon at 5:20 o’clock in his home at Cockrell Hill station on the Fort Worth interurban. He had a stroke last December, from which he never recovered.

he attended the University of Louisiana, graduating with the class of 1858.

Dr. Patton came to Dallas from Sulphur Springs. He was born in Troup County, Georgia in 1838. His father was a distinguished Presbyterian preacher and educator. When a lad of 16 years he came to Texas and made his home with his brother, the Rev. J. C. G. R. Patton, at Linden, Texas, where he studied medicine under Dr. Phillip, and afterward under Dr. Clopton of Douglasville, and subsequently worked in a drug store at Jefferson. With the assistance of his brother, the Rev. J. C. G. R. Patton, he attended the University of Louisiana, graduating with the class of 1858. Next he began the practice of Medicine in Hokpins County, Texas, and remained in the general practice for eighteen years, afterward establishing a drug store at Sulphur Springs, where he accumulated considerable property. He was an army surgeon during the entire time of the Civil War.

In 1888 he came to Dallas. Here he established the Patton-Worsham Drug company.

In 1888 he came to Dallas. Here he established the Patton-Worsham Drug company. For many years one of the leading wholesale drug houses of Dallas. Two other medical companies were established by him. He also established Patton’s Institute in Oak Cliff, a school for boys and girls.

He was married in Hopkins County to Miss Texana Boyd, who was born and reared in that county, and who died in 1901 in Dallas County. He never had any children. He was known as a philanthropist and on numerous occasions contributed liberally to worthy causes, such education, religion, and charity. He often said nothing gave him more pleasure than to help the deserving, He is survived by many relatives, including nieces and nephews in Dallas and in other places.

The funeral will be held in his late home at Cockrell Hill this afternoon at 2:30 o’clock. The Rev, J. W. Hill, former pastor of the First Methodist Church, and for thirty-five years his warm personal friend, will conduct the services. He will be buried by the side of his wife in the Oak Cliff Cemetery.

The following will be pallbearers:

He had a hotel and bank in the Oak Cliff area. Mentioned in the Handbook of Texas under the history of Oak Cliff.

Was one of the first millionaires in Dallas helping in the development of Oak Cliff.

Even paid to have an oil well dug in his back yard during the days of the oil boom in Texas. (Dallas Morning News stories)

Will was contested by a cousin of Texana Boyd Patton which ultimately failed. Was a major news story for a while in the Dallas Morning News.

Donated $25,000 for the establishment of Southwest University in Dallas. 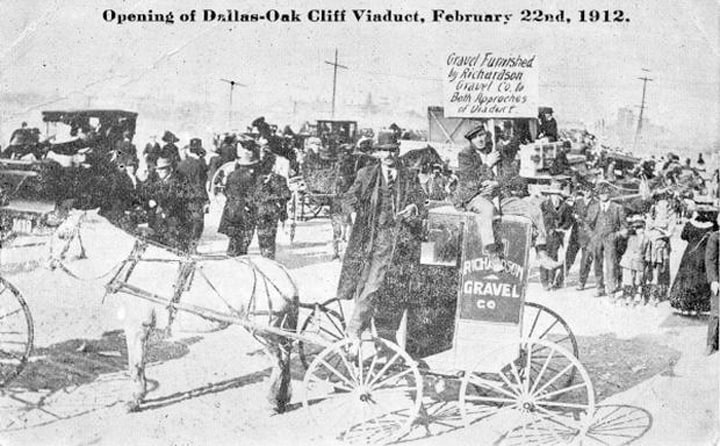 Horse-drawn buggies as well as automobiles were part of the parade that celebrated the opening of the Dallas-Oak Cliff Viaduct, known today as the Houston Street bridge, on Feb. 22, 1912. – Dallas Historical Society

Oak Cliff is a district in Dallas, Texas, United States that was formerly a separate town located in Dallas County; Dallas annexed Oak Cliff in 1903. It has since retained a distinct neighborhood identity as one of Dallas’ older established neighborhoods. Oak Cliff has turn-of-the-twentieth-century and mid-20th century housing, many parks, and proximity to the central business district of downtown Dallas. [Wikipedia]

The boundaries of Oak Cliff are roughly Interstate 30 and the Trinity River on the north, Interstate 45 on the east, Interstate 20 on the south, and Cockrell Hill Road on the west. [Wikipedia]

The Fire Stopped With Difficulty–Account of the Losses.

Oak Cliff was visited by another disastrous fire at 1 o’clock this morning. The flames were first seen in W. H. Graves’ harness shop on the east side of Tenth street, almost at the station. In a few minutes, they had communicated with the building, in which W. J. Parchman & Co. did a drug business and an explosion soon followed, which awoke everyone living near. As soon as the fire was discovered, the alarm was given and the inhabitants aroused from their dreams by the explosion, dressed hurriedly and rushed to the scene of the fire.

In a short time, the flames had crossed the street and secured a hold upon the new brick buildings just in the rear of the post office.

The flames continued to leap from one building to another until nearly every building near the station on the west side were burning down with no possible means of saving them. Many of them were occupied by families and scores of people were seen in dishabille endeavoring to save their furniture. Every one present lent a helping hand saving furniture and buildings, but it was soon apparent that a number of good buildings were bound to go. Thirteen were destroyed and a number of others barely escaped. Dr. E. G. Patton and Rosser Thomas were the heaviest losers.

The following is a list of the property destroyed:

W. L. Nolen, proprietor of the Oak Cliff China Hall, stock valued at $1200, and insured for $500 in the North British & Mercantile. Total loss.

This is the third fire at the Tenth street station in which several of the principal business houses of Oak Cliff were destroyed. Like the other, the origin of last night’s fire is unknown. Such destructive fires as these are forcible arguments for a fire department in Oak Cliff.

Among the heaviest losers is Rosser Thomas, editor and proprietor of the Oak Cliff Journal. He had just bought his partner out and was going ahead building up a good paper.

It is said that it was with difficulty that the postoffice was prevented from burning, as the burning buildings were all around it. 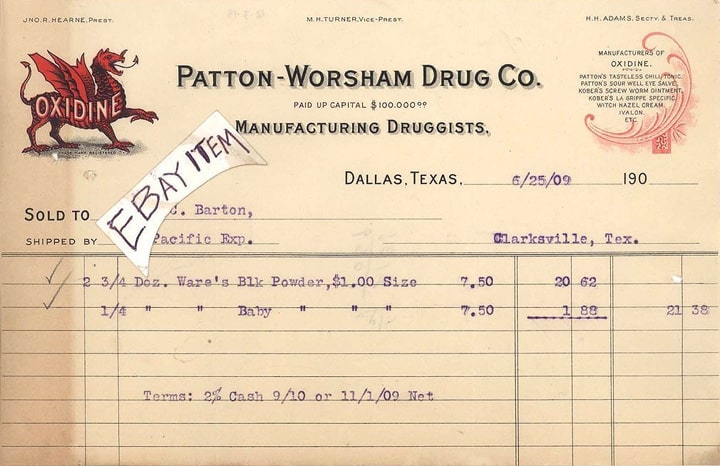 Ferdinand Meyer V is a native of Baltimore, Maryland and has a BFA in Fine Art and Graphic Design from the Kansas City Art Institute and School of Design. Ferdinand is the founding Principal of FMG Design, a nationally recognized design consultation firm. Ferdinand is a passionate collector of American historical glass specializing in bitters bottles, color runs and related classic figural bottles. He is married to Elizabeth Jane Meyer and lives in Houston, Texas with their daughter and three wonderful grandchildren. The Meyers are also very involved in Quarter Horses, antiques and early United States postage stamps. Ferdinand is the past 6-year President of the Federation of Historical Bottle Collectors and is one of the founding members of the FOHBC Virtual Museum.
View all posts by Ferdinand Meyer V →
This entry was posted in Article Publications, Civil War, Druggist & Drugstore, History, Medicines & Cures and tagged Brad Seigler, Dallas, Dr. E. G. Patton, J. C. G. R. Patton, Oak Cliff, Patton-Worsham Drug Co., texas. Bookmark the permalink.