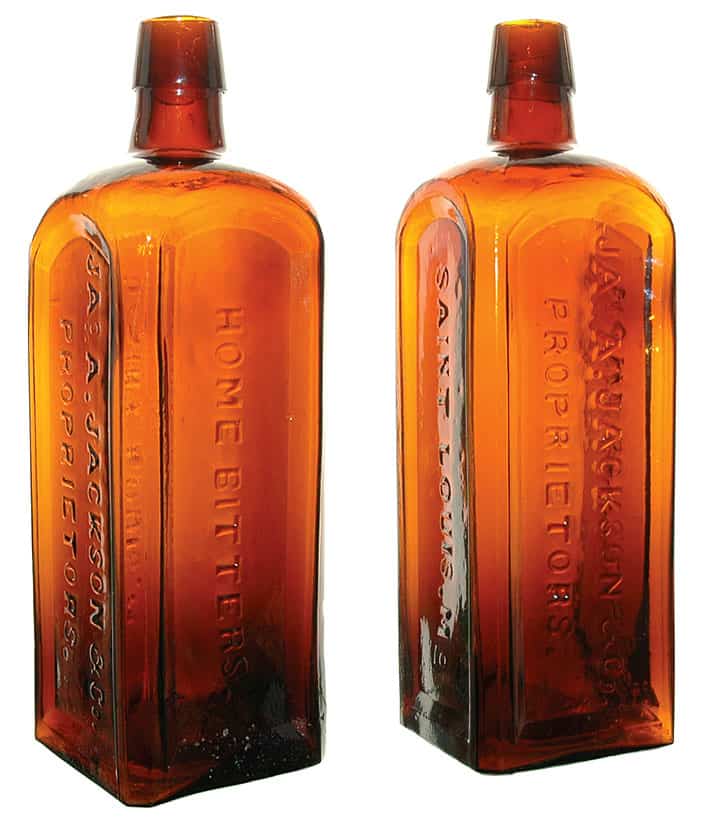 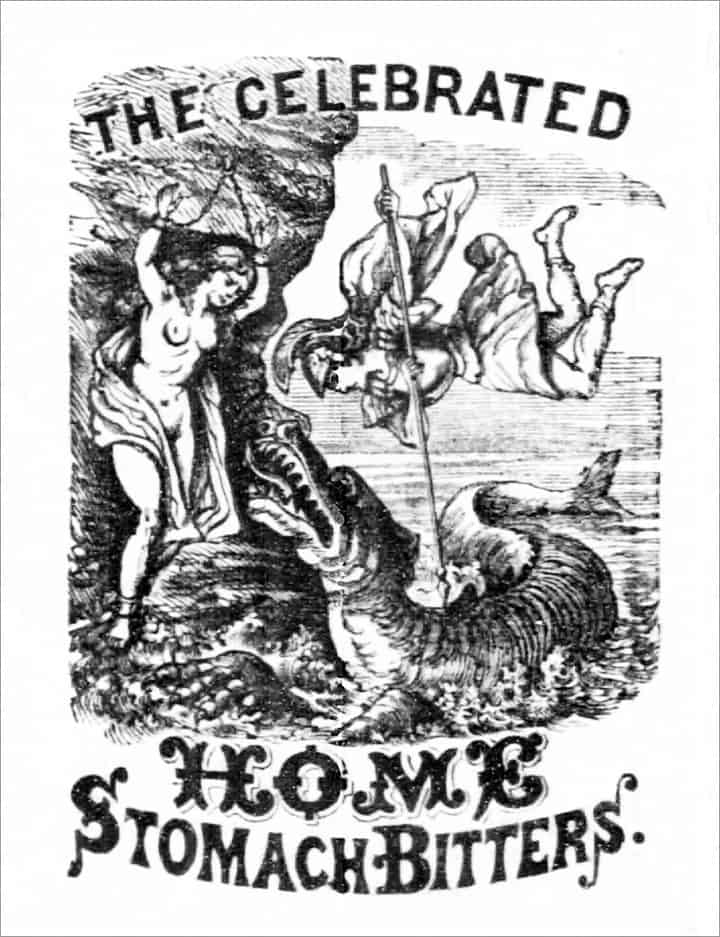 Today, I have reason to quickly educate myself with The Home Bitters of St. Louis. I need to review the variants, the history and find out the rest of the story. First of all, let us not confuse this bottle with the Wheeling, West Virginia Old Home Bitters or Old Homestead Bitters.

James A. Jackson initially developed The Home Bitters in 1870 and took on partners James McQ. Douglas and Paris S. Pfouts in 1874. They were selling wholesale groceries and liquors in Saint Louis when The Celebrated Home Stomach Bitters was introduced. It may well have been an offshoot of the liquor business, as a number of patent medicines were at that time. There is an abundance of support material on this brand and it is refreshing to get history, patent, label, advertising, postal, tax and other information on a brand that was relatively short lived. 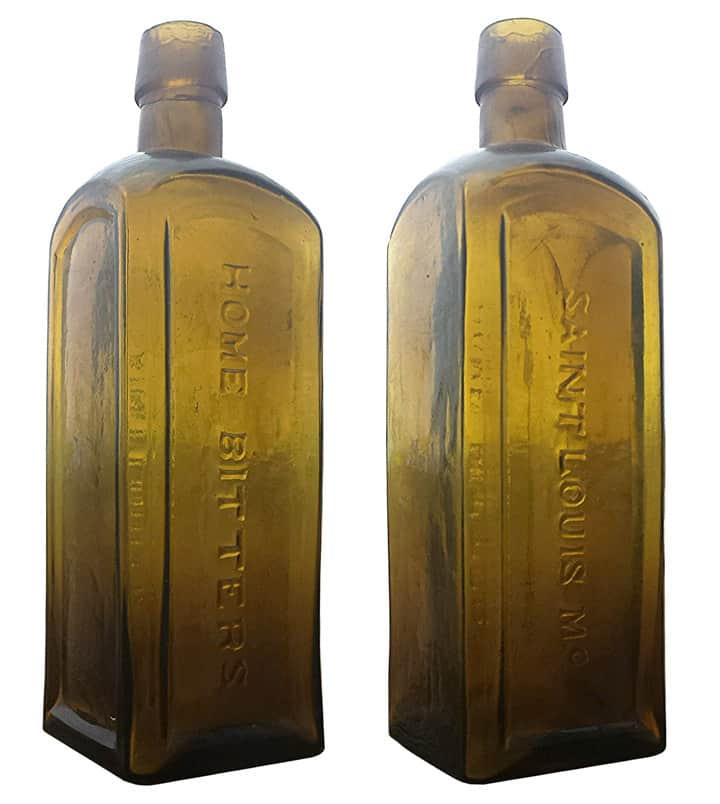 A nicely colored Home Bitters I recently picked up. These are most often seen in straight amber so finding a lighter off colored example is pretty sweet. I always like it when they spell out Saint Louis. – Tim Henson (see special post dedicated to this specific bottle)

HOME BITTERS // JACKSON. PFOUTS / & DOUGLAS / PROPRIETORS / ST. LOUIS, MO. // f //
L… The Celebrated Home Bitters
9 x 2 3/4 x 1 1/4 (7 1/4) 1/4
Square, Amber, LTC, Applied mouth, 3 sp, Common
North Second Street
Label: Any physician or chemist in the United States is invited to call and examine the formula and manner of combining the ingredients. The best tonic stimulant known to the medical faculty. Indorsed by every physician who has examined them, among whom are some of the most eminent in the country, as being the best and purist made. These bitters are prepared from the most valuable roots, barks and herbs known to medical science, and are unequalled as a preventative for all summer disorders, biliousness, fever and ague, intermit tents, indigestion, dyspepsia.
The Home Stomach Bitters are no patent medicine, nor is the formula kept secret from the honorable members of the medical fraternity, and we ask a thorough investigation of their component parts from the scientific gentlemen.
Jackson became partners with Pfouts and Douglas in 1874.
Drug Catalog: 1872 Mellier, 1878 CB & Co. 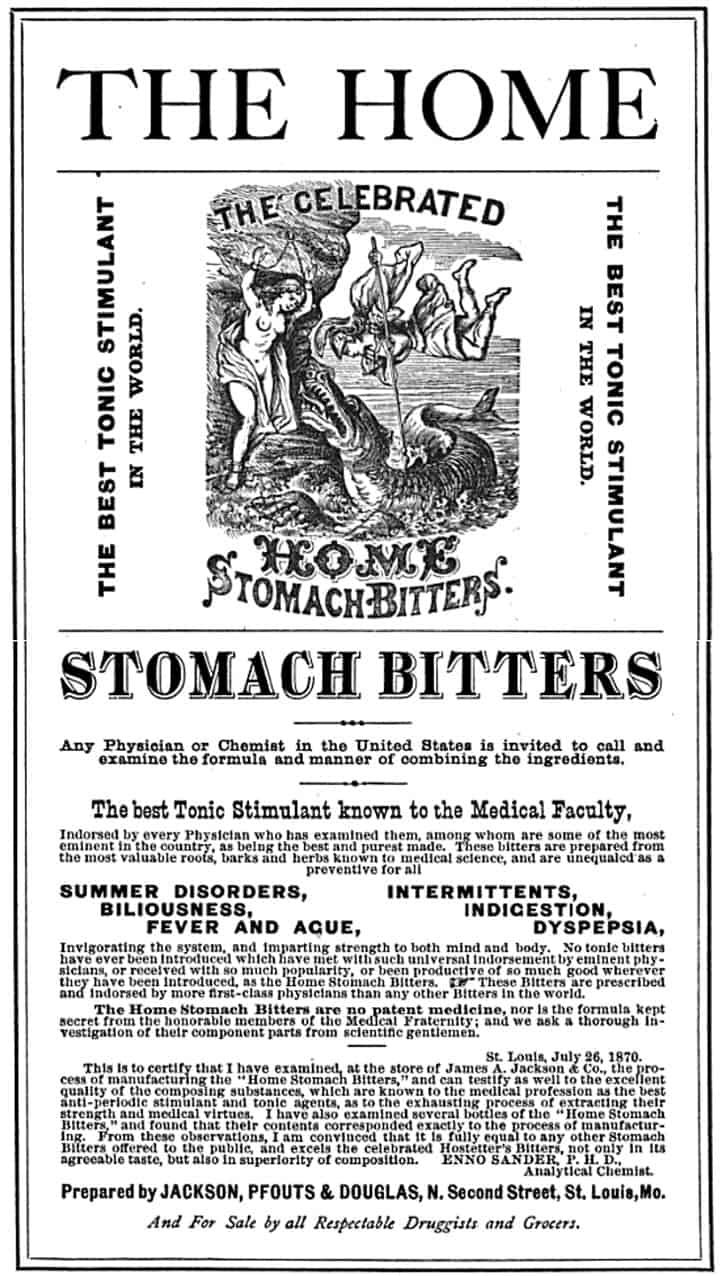 Advertisement for The HOME – The Celebrated Home Bitters – Gazeteer of Utah and Salt Lake City Directory, 1874 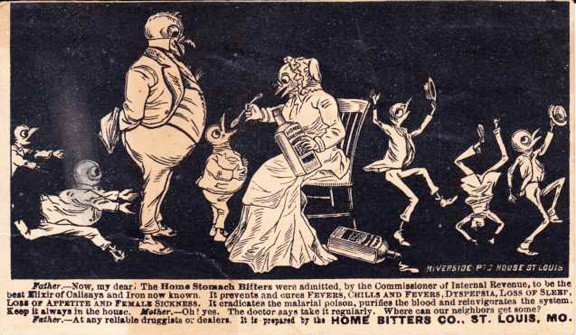 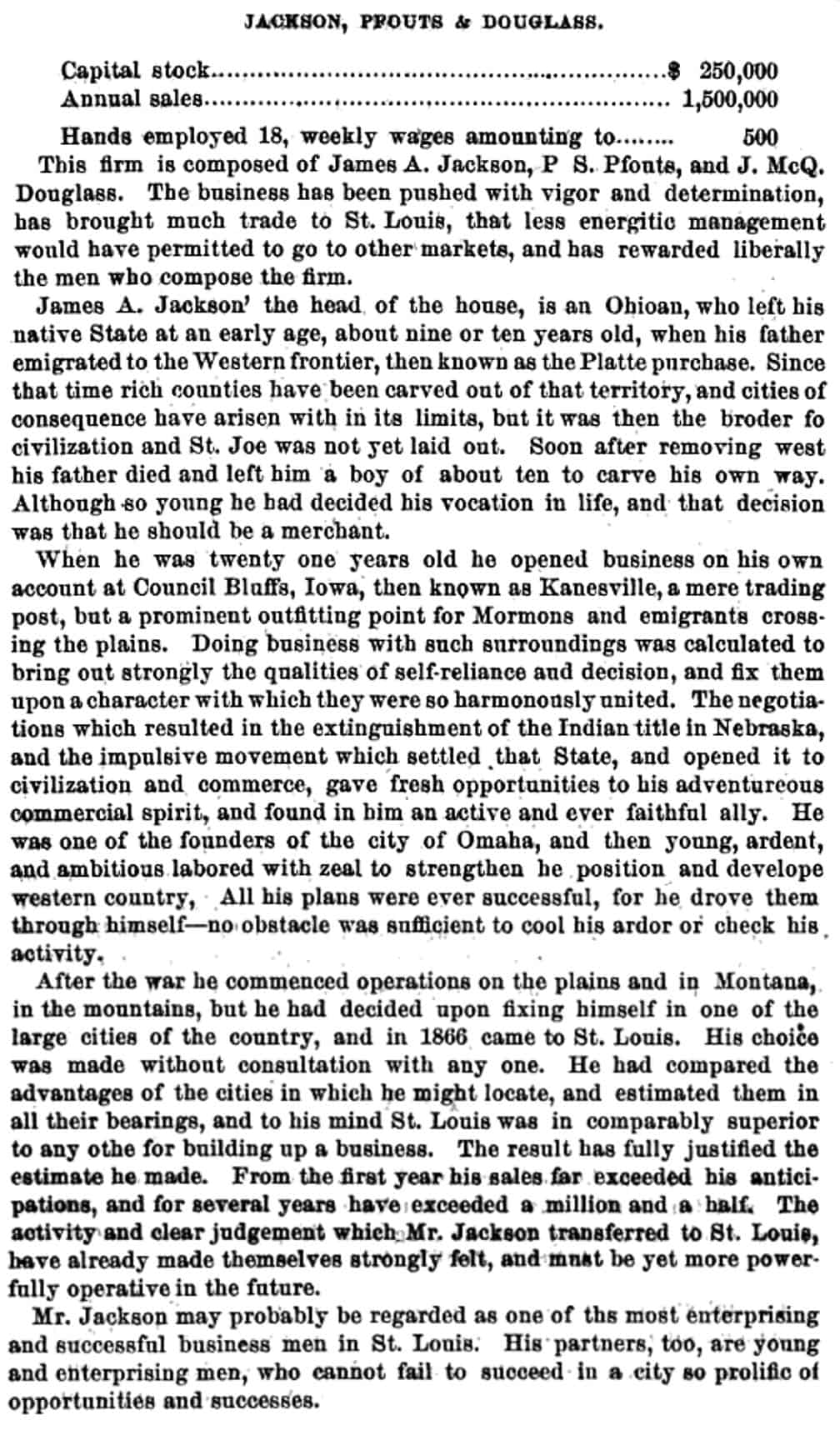 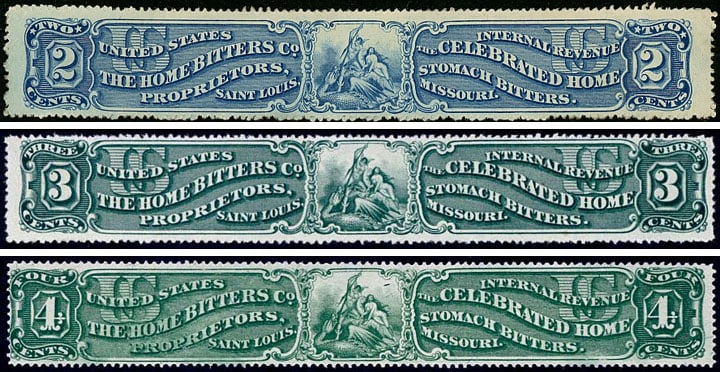 In April of 1875 The Home Bitters Company took over from Jackson, Pfouts & Douglas. They had stamps printed in three denominations beginning with the four-cent green, first issued in June of 1875 and last issued March 3,1883. 271,514 were released on silk paper and 213,617 on watermarked paper. The copy above is on silk paper.
The three-cent green stamp was printed next, from 1876 until February 12, 1883. 482,130 were issued on silk, pink and watermarked papers. The one above is on watermarked paper. – rdhinstl.com 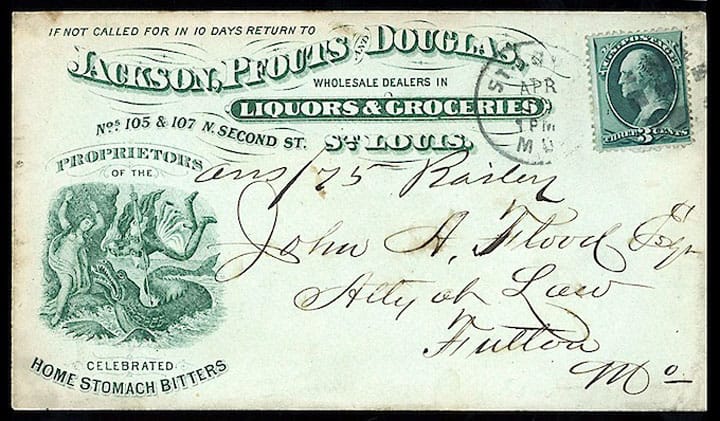 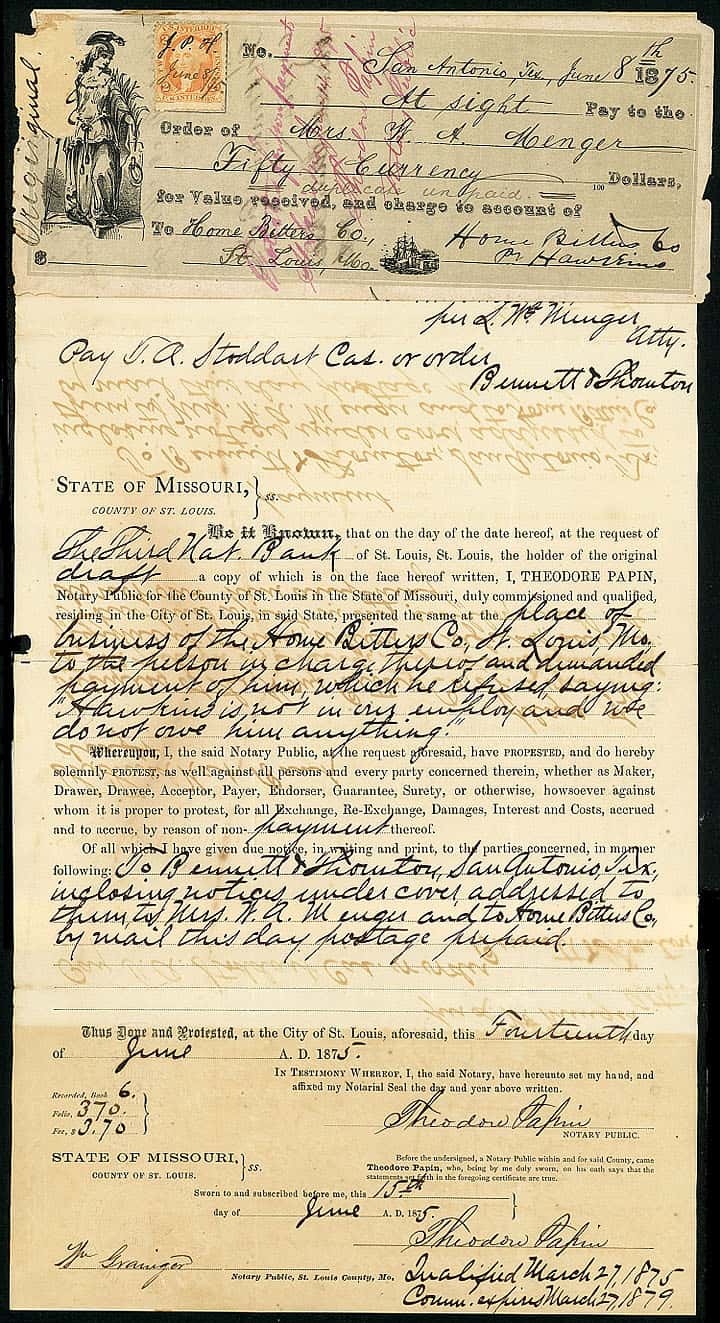 It appears that someone in Texas was passing himself off as a representative of the Home Bitters Company and writing merchant’s drafts on the company to obtain money. When this one came back to the company to be approved they denied it, which led to a protest filed in 1875. – rdhinstl.com 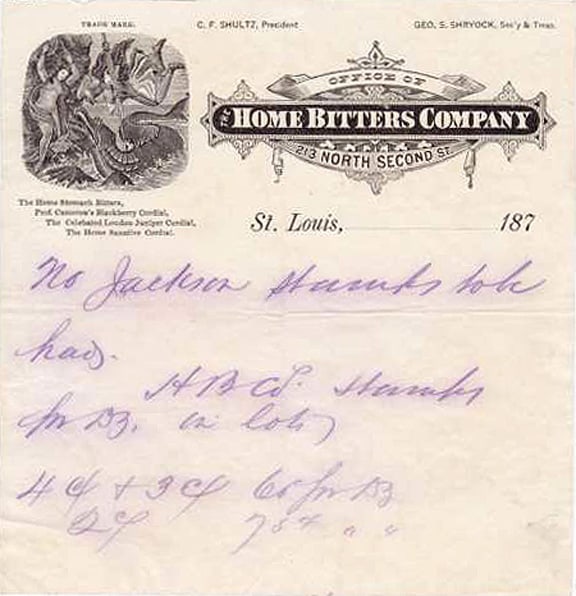 Ferdinand Meyer V is a native of Baltimore, Maryland and has a BFA in Fine Art and Graphic Design from the Kansas City Art Institute and School of Design. Ferdinand is the founding Principal of FMG Design, a nationally recognized design consultation firm. Ferdinand is a passionate collector of American historical glass specializing in bitters bottles, color runs and related classic figural bottles. He is married to Elizabeth Jane Meyer and lives in Houston, Texas with their daughter and three wonderful grandchildren. The Meyers are also very involved in Quarter Horses, antiques and early United States postage stamps. Ferdinand is the past 6-year President of the Federation of Historical Bottle Collectors and is one of the founding members of the FOHBC Virtual Museum.
View all posts by Ferdinand Meyer V →
This entry was posted in Advertising, Bitters, History, Liquor Merchant, Medicines & Cures, Postage, Tax Stamps, Tonics and tagged Henson, home, Home Bitters, James A. Jackson, James McQ. Douglas, Joe Gourd, Missouri, Paris S. Pfouts, Saint Louis, St. Louis. Bookmark the permalink.