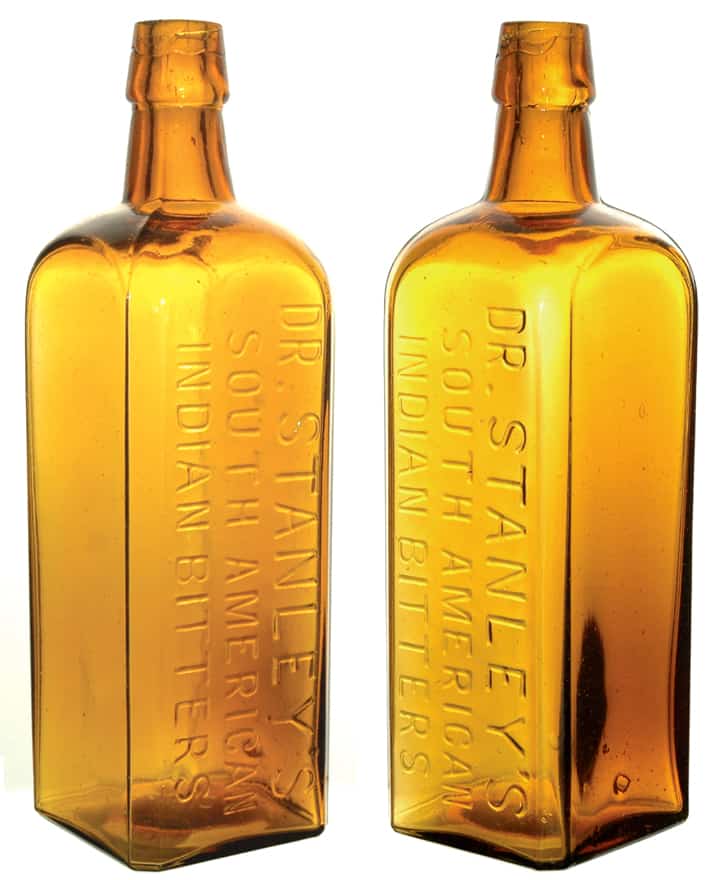 Currently on ebay there is a nice example of a Dr. Stanley’s South American Indian Bitters (see listing below). Yet another Indian name for a bitters product. The color of the ebay example reminded me of my example which is pictured below. There are actually two molds for the name.

The Carlyn Ring and W.C. Ham listings in Bitters Bottles Supplement is as follows:

S 174 DR. STANLEY’S / SOUTH AMERICAN / INDIAN BITTERS // f // f // f // // b / 400
L … A. G. S. Stanley’s South American Indian Bitters, Prepared only by Dr. A. G. Stanley, Pharmaceutical Chemist, 280 Main Street, Lykens, Pennsylvania, USA
9 x 2 5/8 (6 3/8) 3/8
Square, Amber and Aqua, LTC, Tooled lip, Scarce
There are also amber examples with no base embossing.
Dr. Alfred Stanley was born in Salisbury, England in 1845. He learned the drug business working at several firms in London. In 1869, Dr. Stanley emigrated to the United States, landing in New York and then moving on to Philadelphia where he worked for Ellis & Co. In 1871 he moved to Lykens, Pennsylvania establishing a drug business on West Main Street.

Dr. Stanley put out a number of medicinal products from his drugstore including the South American Indian Bitters. He continued in business until 1904 when he sold his business to Dr. W. H. Uhler. Dr. Stanley died in 1917. Uhler continued producing the bitters until at least 1906 because they are labeled examples with the wording Guaranteed by A. G. Stanley under The Pure Food and Drug Act of June 30, 1906. 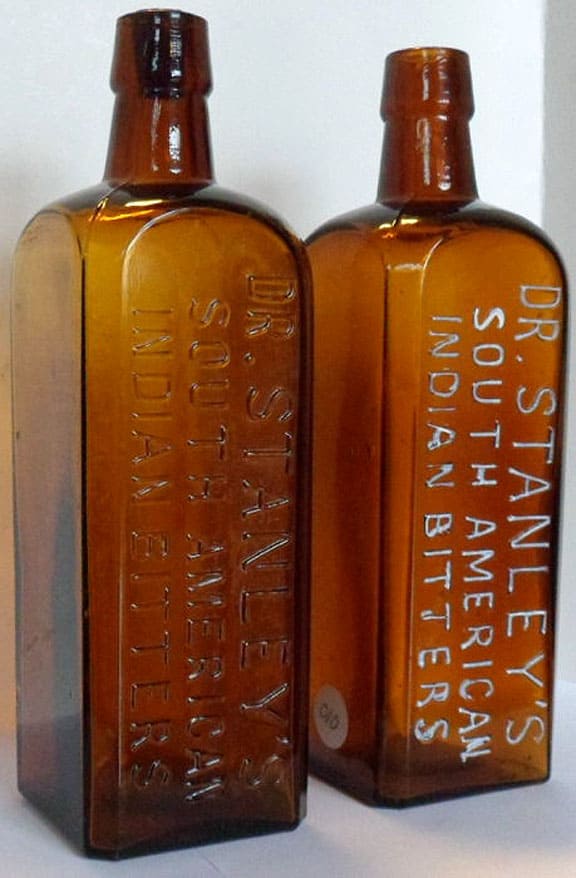 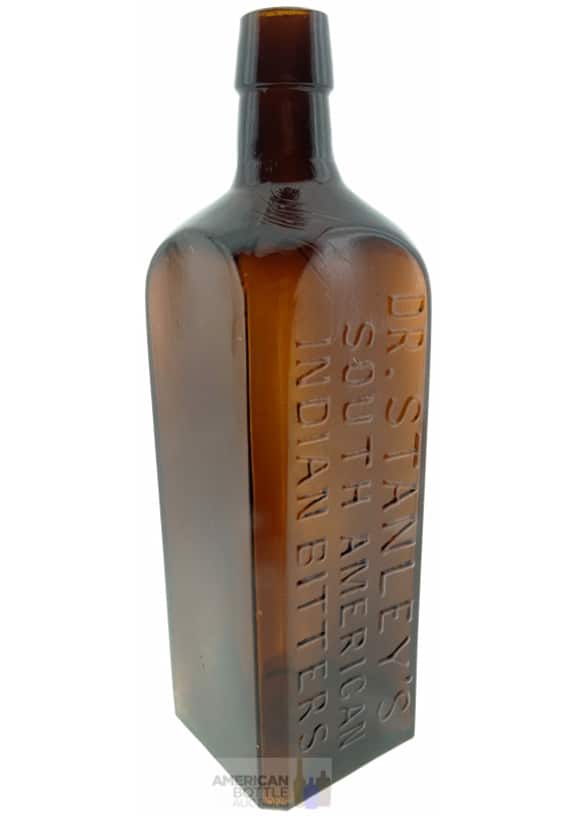 DR STANLEY’S SOUTH AMERICAN INDIAN BITTERS. S-174 Applied top. According to Ring, Dr. Alfred Stanley made this bitters from 1878-1913. His drugstore sold it in a five county area of Pennsylvania. What most interesting is how a guy named Stanley made a South American Indian Bitters in a rural area of Pennsylvania. Dr. Livingston, I presume, talked him into it. At any rate, it’s an exotic sounding bitters, which was probably just a similar alcohol concoction to the multitudes of other competitors. These also come in aqua. This example is a deep amber with some light overall character. Grades a 9.5. – American Bottle Auctions | Auction #62 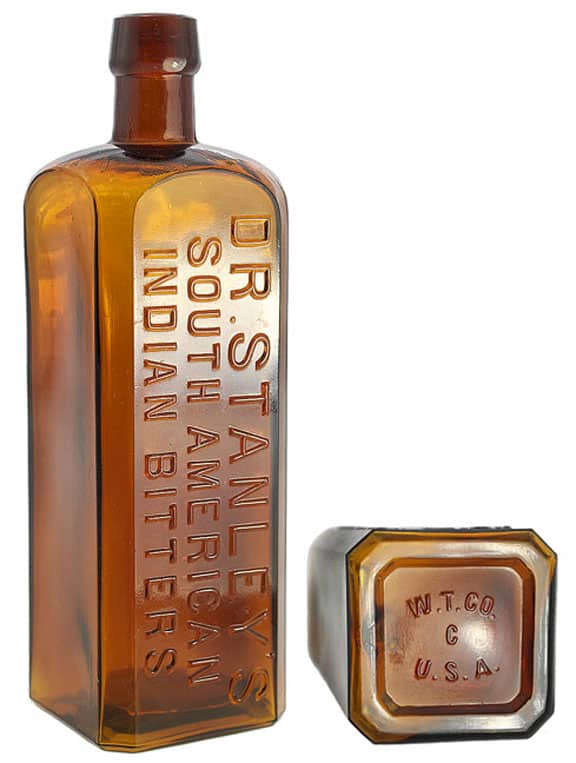 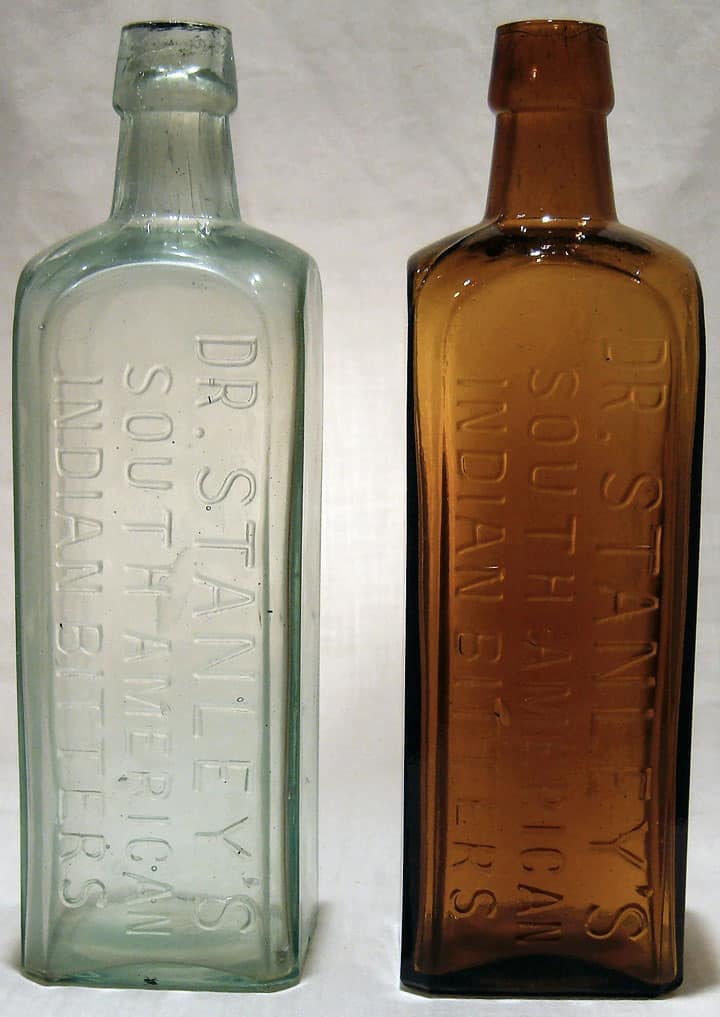 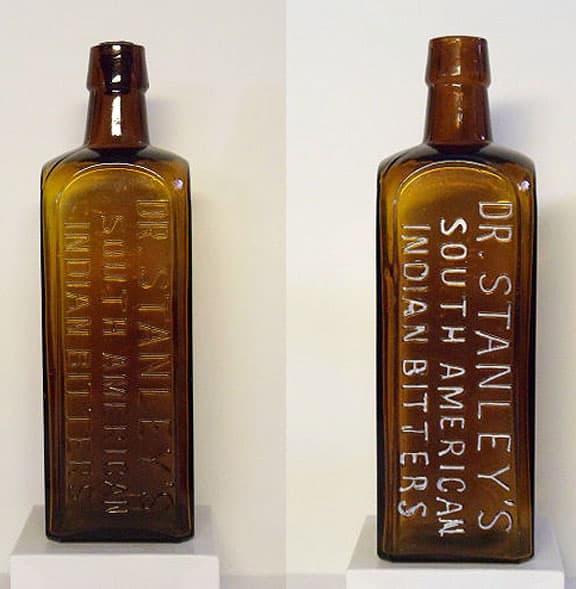 Stanley attended the College of Salisbury. He would learn the drug business with Roberts & Son, who he spent four and one half years with. Then he went to London and worked for the well known firm Peter Boully, retail druggists of London.

1869: Dr. Stanley moved to America in 1869 and for a short time he lived in New York. He would move to Philadelphia were he would work for Ellis Sons & Co.

1871: In 1871 Dr. Stanley relocated to the corner of Main St. and Market St. in Lykens, Pennsylvania. Here he would open up his own drug business and general supply of all kinds of drugs. He acquired a reputation of being one of the most reliable druggist in the county along with the surrounding counties.

1873: In 1873, Stanley was listed as one of the original Directors of the Gratz Driving Park and Horticultural Society. He was also the president of this long lived organization that is now known as the Gratz Fair Association. Dr. Stanley was President of Lykens Agricultural Society for three years. Stanley was a collector of rare stuffed birds from various parts of the world, which he had in his possession.

1873: Dr. Stanley was married in 1873 to Mary Spoeri in Lyken’s. They would have six children (Frederick A. Stanley, Chas J. Stanley, Wellington S. Stanley, Kate M. Stanley, Ray S. Stanley, Mabel B. Stanley. His son Frederick would became a druggist and work with him.

1878: Dr. Stanley put out a number of medicinal products from his drugstore including the South American Indian Bitters, which was produced from 1878 to 1906.

Advertisement: “Itch, Prairie Mange, and Scratches of every kind cured in 30 minutes by Woolford’s Sanitary Lotion. Use no other. This never fails. Sold by A. G. STANLEY, Druggist, Lykens.

1880: The American Journal of Pharmacy listed Dr. Stanley in the graduating class of 1880 from the Philadelphia College of Pharmacy. 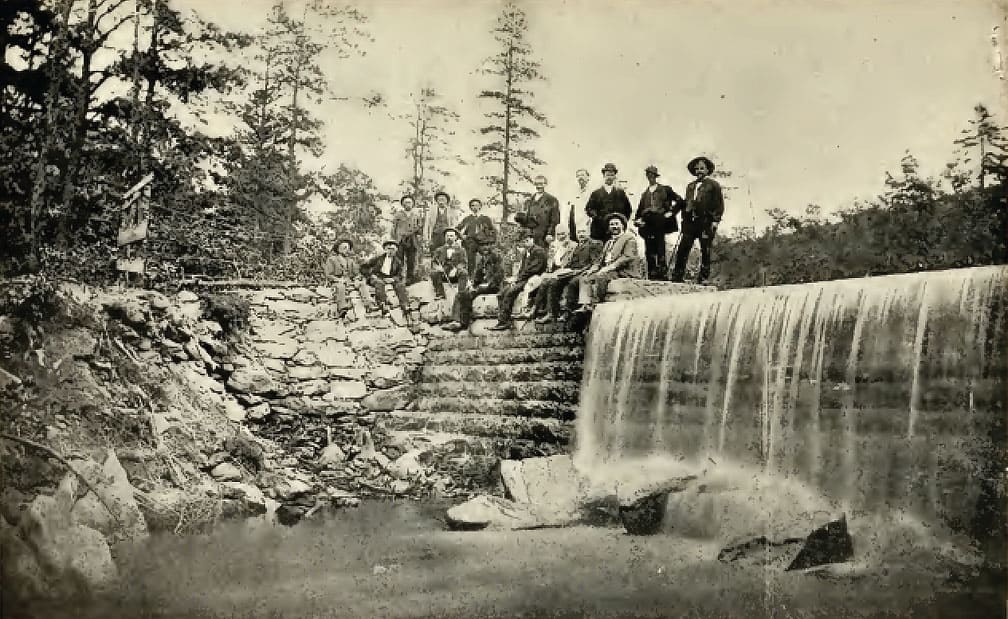 Posing on Lykens Resevoir in 1887. Dr. Stanley is sitting on the far right. From Lykens-Williams Valley history – directory and pictorial review. Embracing the entire Lykens and Williams Valley, in the effort to preserve the past and perpetuate the present. (1922) – Barrett, J. Allen

1904: Dr. Stanley continued in business until 1904 when he sold his business to Dr. W. H. Uhler. Uhler continued producing the bitters until at least 1906 because they are labeled examples with the wording Guaranteed by A. G. Stanley under The Pure Food and Drug Act of June 30, 1906.