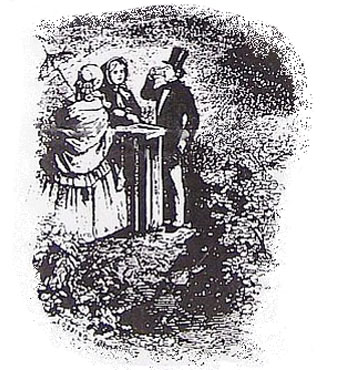 the “Saratoga” of Western N.Y. 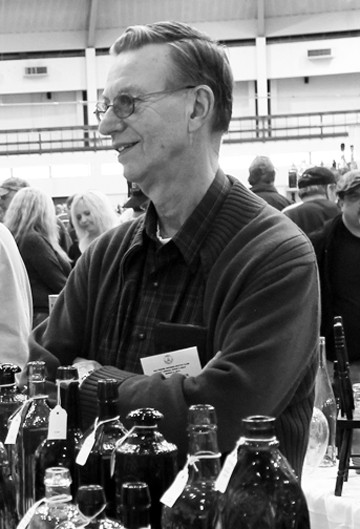 Back in 2005 I published an article on the Avon Mineral Springs in the Antique Bottle & Glass Collector magazine (AB&GC). Prior to that, Les Buell, East Williamson, New York published an informative article in the Old Bottle Magazine (OBX, 1975), entitled Avon Mineral Springs. It pictured several early photos including the bathhouse, “Spring house”, Lower Spring, and the (uncapped) spring well, as viewed at that time. Recently talking with Don Tucker, we decided it might be time to do an update on the springs along with some newer color photos.

Although I had visited the site of the springs years ago, before giving a short talk to the Saratoga BCS meeting in 1997 and publishing the aforementioned article in 2005, I set off for yet another visit and some new photos. Currently the site is called Avon Park and locals refer to it as Avon Springs Downs, where a present day harness track and public park exists.

I set off for yet another visit and some new photos. 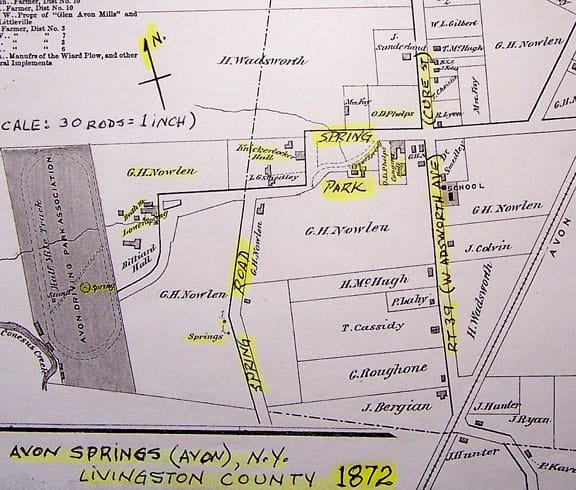 Much to my surprise, several ducks were observed swimming leisurely, unaffected by the aromatic waters.

I found only one spring there today as evidenced behind the harness track barns. On the map, this site is southeast of the village of Avon, off Route 39. I also located the site of the lower spring, but the well has been capped and surrounded by a wooden gazebo. This is easily found in the center of the park; the well no longer bubbles the mineral waters. Of course, even a blind man could easily identify its odoriferous source. Capping was necessary in years past due to vandalism, but at least today its still a monument to the past. The lower spring is piped underneath the harness track to a swampy looking pond about 200 yards from its origin. One can easily locate its egress by its sulfurous odor and white residue. No aquatic life there, I thought. Much to my surprise, several ducks were observed swimming leisurely, unaffected by the aromatic waters. 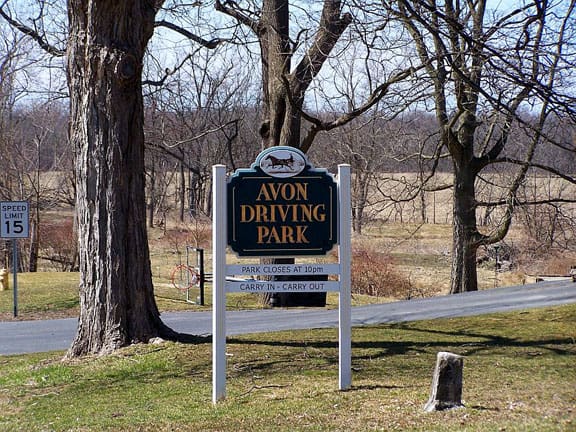 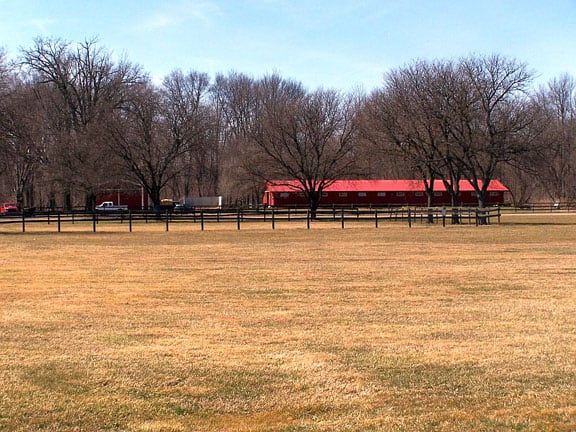 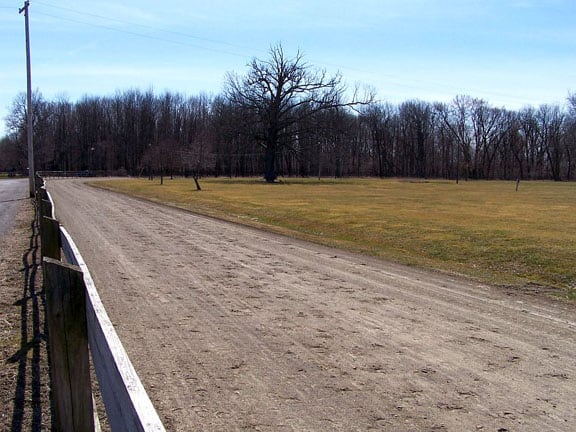 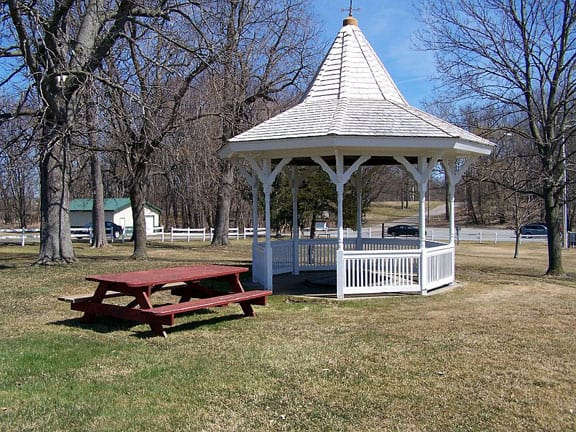 The town historian, Maureen Kingston, told me the village property actually contained several springs, bordered by Conesus Creek on the south and the Genesee River on the west. The major springs were called the “Upper” and “Lower”. The Upper spring is located just east of the Lower spring, on the south side of Spring Street. A third spring, known as “Magnesia” spring is purported to be near the harness track and was considered to be the most beneficial, due to medicinal properties. I spent much of the day combing the woods behind the stables in search of that spring, all to no avail. Historical records evidence a fourth spring called “Longs”, and was said to be located about a mile southwest of lower spring. This spring was first used in 1834 and was considered to be the “strongest” of all the springs in the vicinity. It was said it could only be reached from the road to the present community called Fowlerville. I again found no evidence of it. Records tell of a fifth spring called “Bath” or “New Spring”. This was most likely the two spring wells located on the property of the Avon Cure, a 4-story hotel located on Cure Street (more on this later).

In all my hiking around the grounds, I never found even the slightest evidence of a glass shard for an Avon mineral springs bottle.

Circling back to Spring Street, toward Route 39 or Wadsworth Avenue, it didn’t take me long to locate the site of the Upper spring, situated in another swampy area between some modern day houses. Just follow your nose! Near the Upper spring location, I could only visualize the remnants of an old stone foundation of the famous “Congress Hall” (still evidenced by stone pilings in the back yard of a ranch style house). In all my hiking around the grounds, I never found even the slightest evidence of a glass shard for an Avon mineral springs bottle. I have been told that even the town museum has no example on display of any of the Avon mineral water bottles. 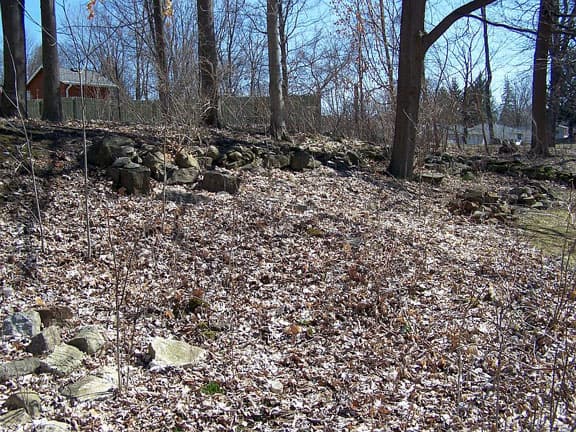 Since researching back in the 1990s and again today, I can only speculate why the embossed Avon Mineral Spring bottles are so scarce. History points to Avon’s bottled water products being shipped mostly south, to Pennsylvania and beyond. Strong competition of other New York springs (particularly “Saratogas), up to and after the Civil War, was also a major factor. A declining interest in the curative properties of mineral waters as well as prominent local hostelry being destroyed by fires also contributed to the demise of the Avon spring waters after 1876.

Prior to the first white settlers to the area in 1797, the nearest Indian village at that time was located near Indian Pond, across the Genesee River in the present town of Caledonia. The Seneca’s named their village Canawaugus, meaning “the place of bad smelling waters” because of its proximity to the mineral springs on Avon’s east side of the river. It was said, “Grimace was the prevailing feature on the face of the new-comer when swallowing the beverage of the fountain”.

The Seneca’s named their village Canawaugus, meaning “the place of bad smelling waters” because of its proximity to the mineral springs on Avon’s east side of the river.

Originally settled and called Hartford, its name was changed to Avon in 1808. Avon was referred to as the “New Haven” of the west in 1853, as the spa became famous and several large hotels emerged. A large depot was built for the railroad. Hotels boasted billiards, bowling alleys, music and dancing, sports for the “fowler”, and bathhouses. 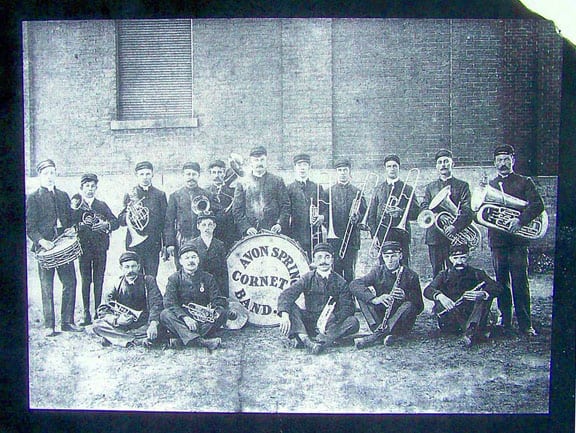 Water at the Lower spring was first to be used medicinally. Wadsworth erected a building on his farm in 1821, near the spring, housing a crudely constructed “shower box”, for those wishing to use the spring for bathing. 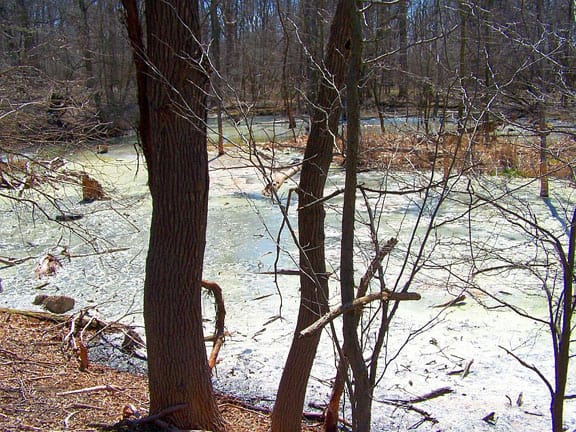 This was followed two years later by an enlarged and new bathhouse. Capt. Asa Nowlen purchased the Lower spring area in 1836, later passing in on to George Nowlen who in turn sold it to Dr. O. D. Phelps in 1859. (Both Nowlen and Phelps names appear on several of the Avon bottles. The racetrack, planned by Nowlen in 1836, remains today). The Upper spring waters were first used in 1827 after Nehemiah Houghton built an Inn nearby. It was known as the American Hotel, later called Congress Hall. Its height of popularity was in 1859. 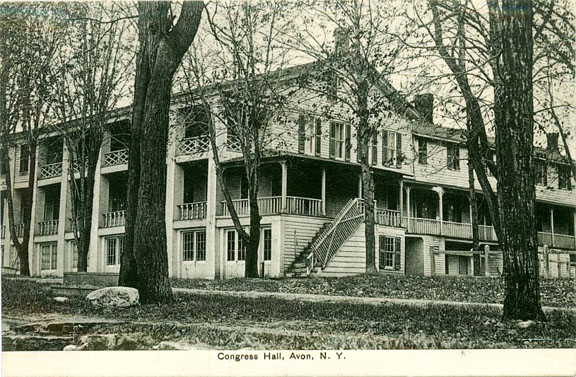 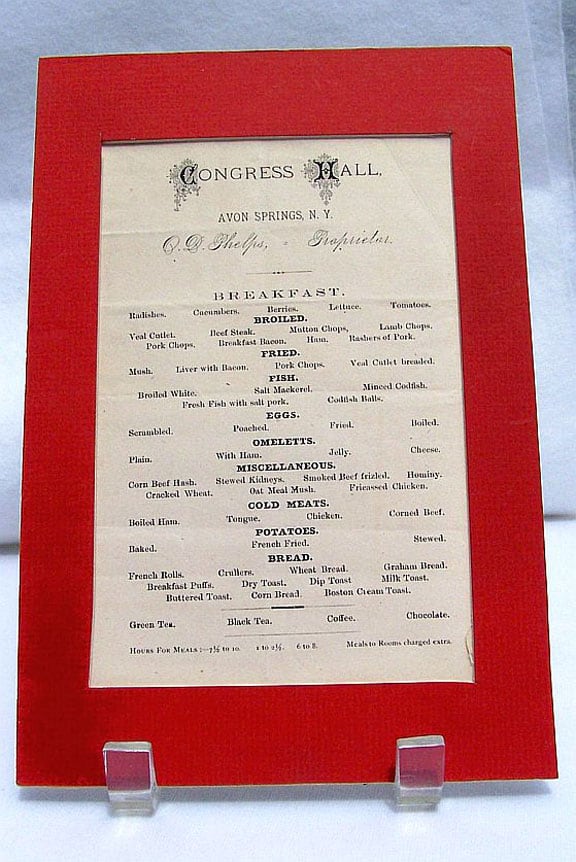 Magnesia spring, near the racetrack and Conesus Creek, was not used until the glory of the spa began to fade in later years.

The gay and fashionable preferred the U.S. Hotel and Congress Hall while the invalids chose the Knickerbocker.

In 1829, Dr. Derick Knickerbocker purchased land between two dark marshes out of which the Upper and Lower springs bubbled forth and built the Knickerbocker Hall on site. The gay and fashionable preferred the United States Hotel and Congress Hall while the invalids chose the Knickerbocker. Dr. Knickerbocker was given much credit for having built up the popularity of Avon Springs as a health resort. There were several successive owners before it was destroyed by fire in 1886. 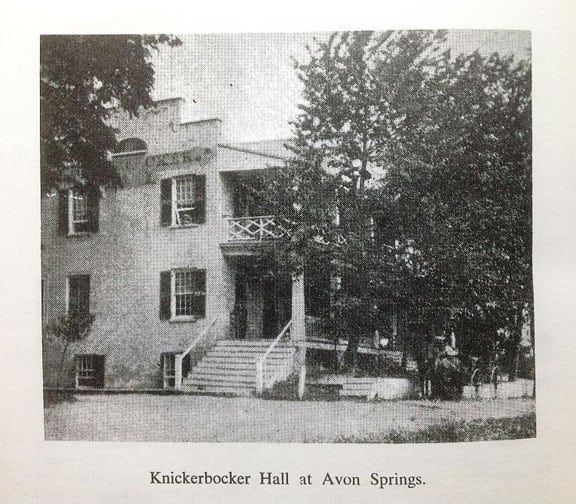 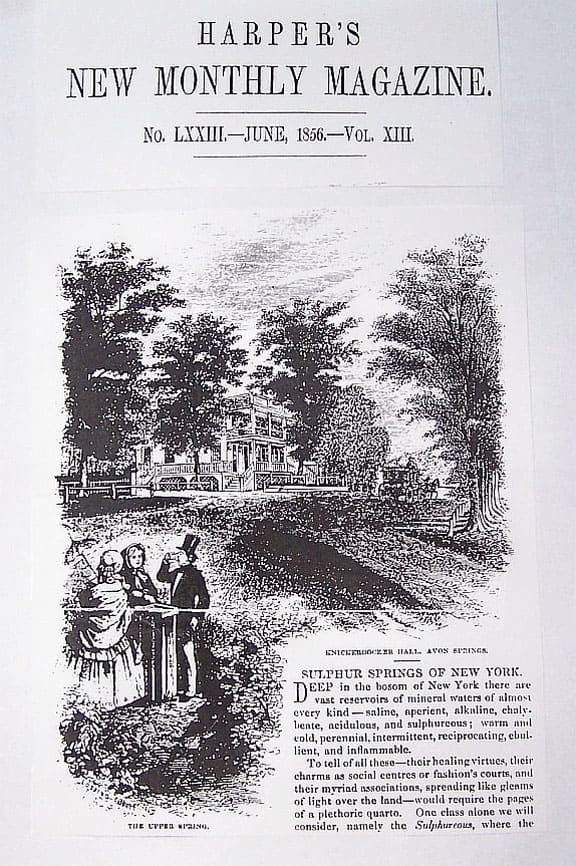 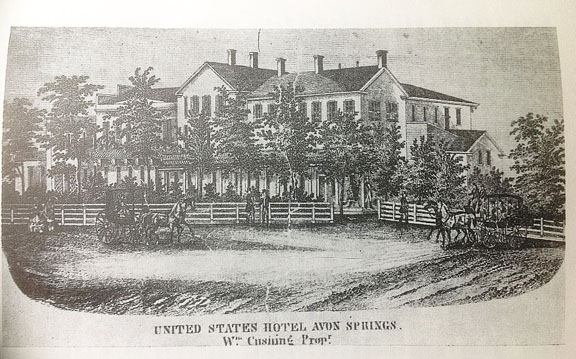 Dr. Phelps expanded the land around Congress Hall to be named Congress Park. Today, only stately trees mark the site on lower Spring Street; garden and landscapes of the Upper spring are no more.

Charles Whalley built the Avon Cure, a four-story hotel, in 1866. It was located on Cure Street (now Route 39, just before Spring Street) and could accommodate over 100 guests. Mineral water for the baths was supplied from two springs located on the property. In 1871 it was renamed The Sanitarium. In 1904 it was taken down, moved to Conesus Lake and is currently known as the Livingston Inn. 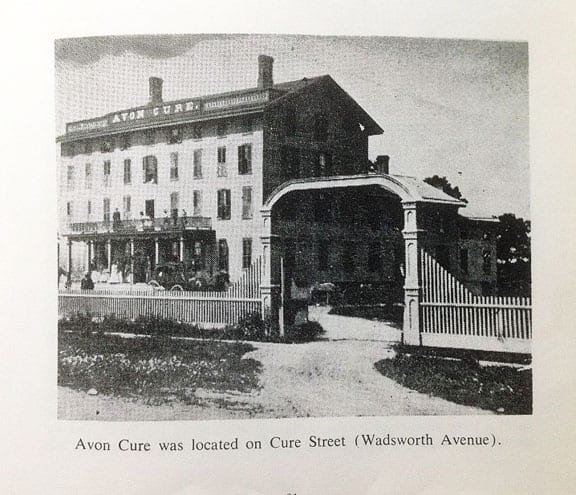 Area adjacent to the Lower spring and racetrack has been known by several names, Congress Park, Avon Springs Driving Park and presently Avon Springs Downs. After its popularity began to fade, the Erie Railroad ran excursions from Rochester to Avon on holidays during summer months. Picnics near the Lower Spring and horse races on the historic old track were popular pastimes.

To the best of my knowledge, only the mineral waters from the Upper and Lower springs were bottled. Five different embossments were used. 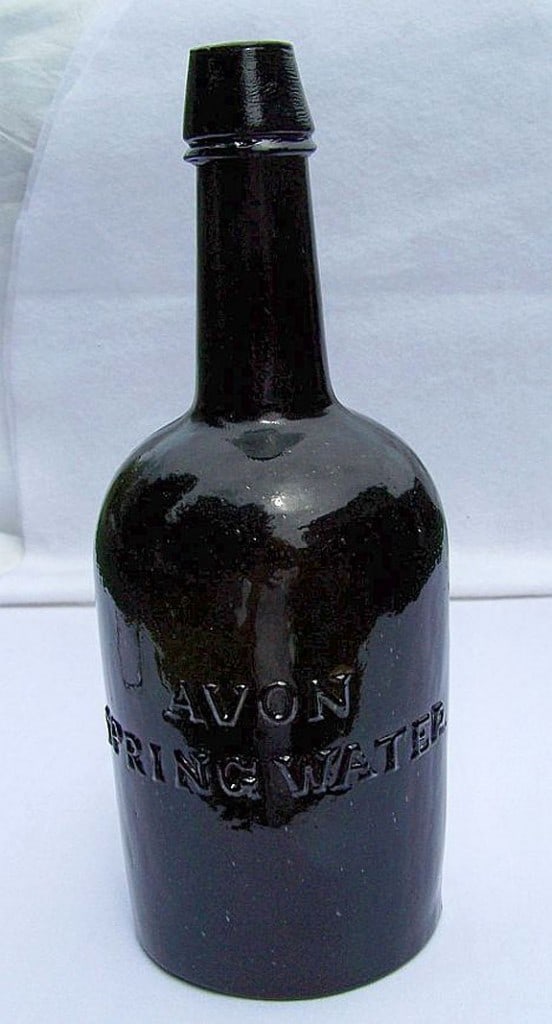 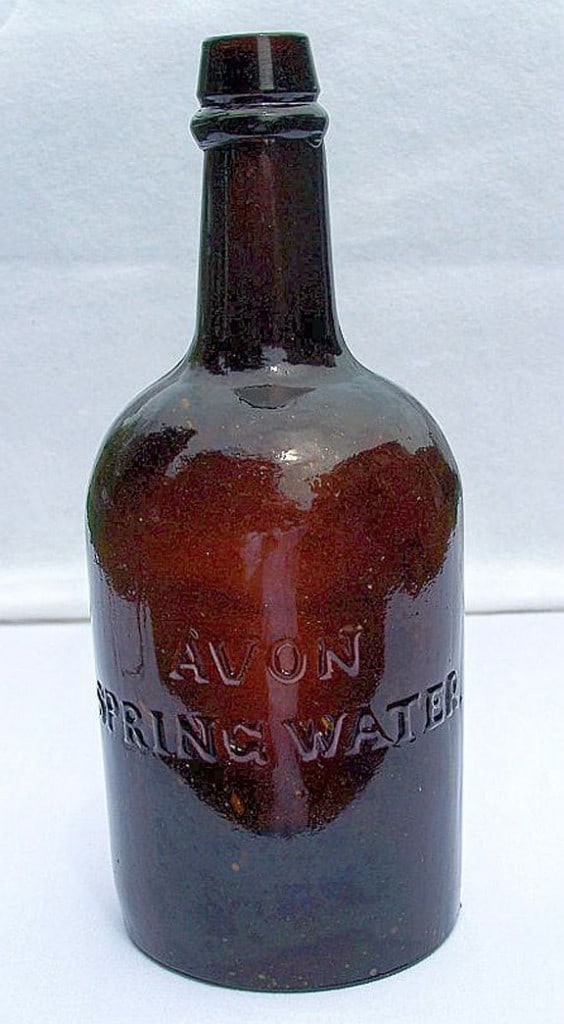 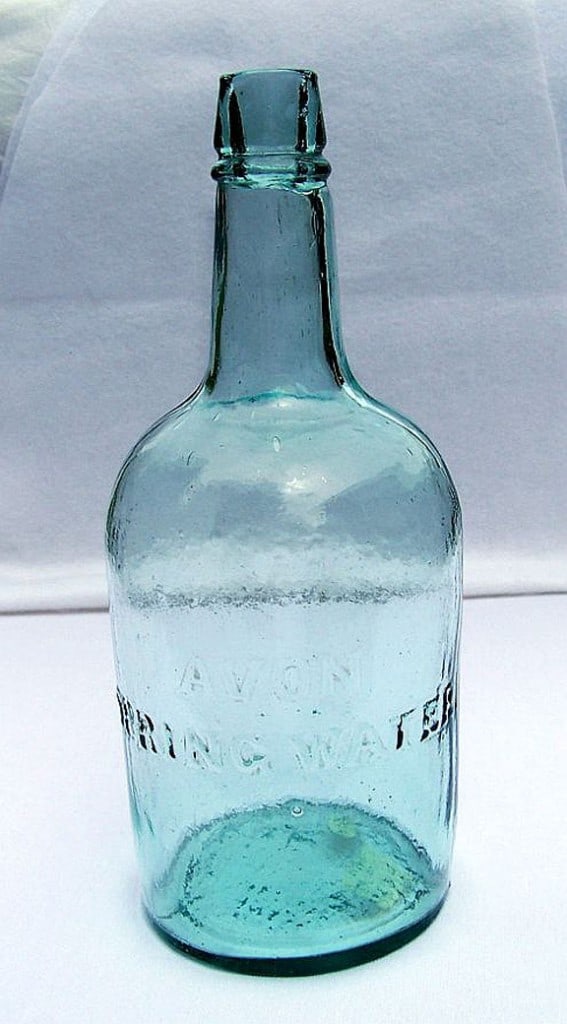 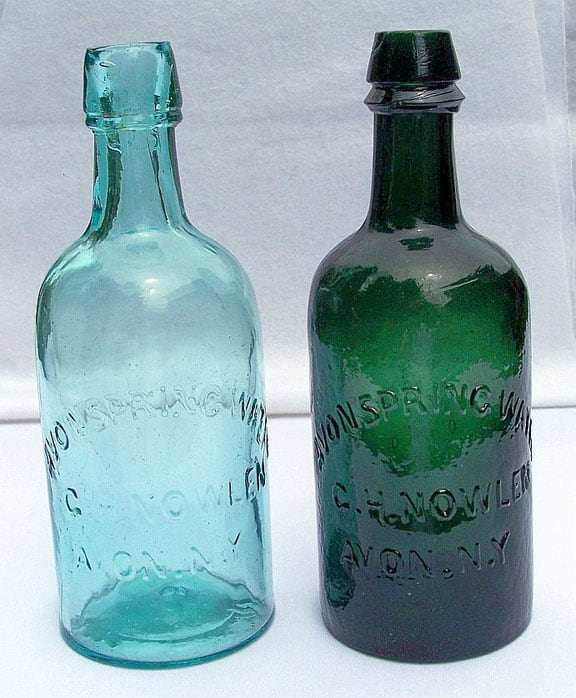 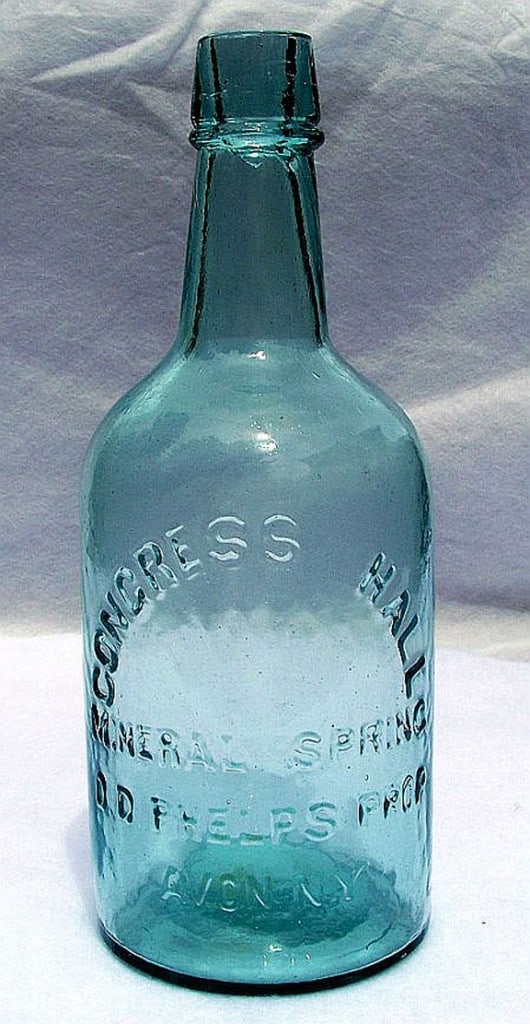 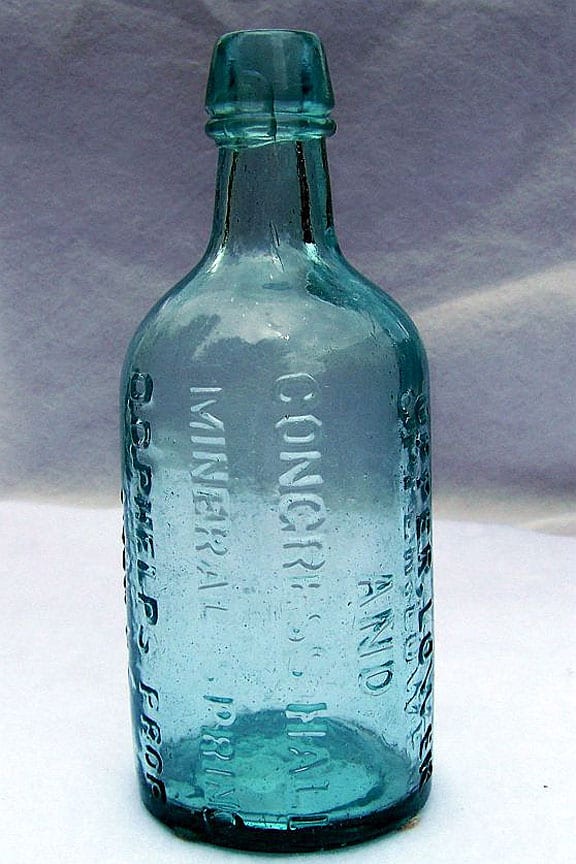 Note that all the Avon Spring mineral water bottles are considered rare or scarce since they were bottled for only a relatively short time. Also, they competed in a relatively small market compared to Saratoga bottles. That most of the hotels burned or had financial problems contributed greatly to their demise. And finally, there was an increased lack of interest in the so-called curative powers of mineral waters. It should also be noted that a recent article in the April 2013 Spouter reported that Saratoga bottles were made at Mt. Pleasant Glass works from 1846-1866, including the N-3 olive green Avon quarts. However, no aqua Avon mineral bottles were made there, it so stated. Question is, where were amber and aqua Avon bottles made? I don’t know. I suspect that the emerald green N-4 could have been manufactured at Lockport, as it’s similar to the green Oak Orchard colors. Possibly other Avon bottles were made at Lockport or Lancaster, due to the proximity of the glass works.