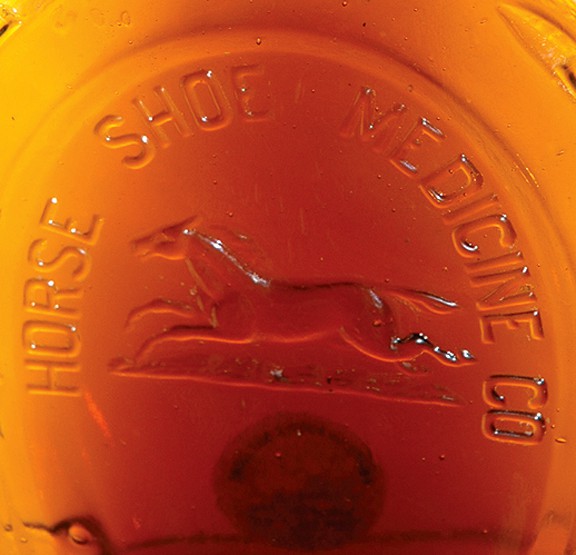 The following pages have been written with the hope of directing attention to one of the most insidious dangers that threatens the moral and physical welfare of the community. Intemperance – as the word is generally understood – assumes every alluring guise, and under that of medicinal “Bitters” widely advertised and commended, it has brought woe and misery to multitudes that never suspected their peril until too late.

Many of the so-called “Bitters” are simply whiskey, with scarcely the taste disguised. Though their name is legion, no statistics can ever show how many good and well-meaning persons have been dragged to the lowest depths of poverty, sorrow, suffering, and finally death by the various “Bitters” which in reality are the deadliest foe to humanity.

WOW, what a great introduction to the book Jack’s Horseshoe! Looks like those temperance folks had it all figured out.

Today we will look at a wonderful figural bitters bottle that sits proudly on one of my shelves. I was reminded of the ‘horse shoe shaped’ Horse Shoe Bitters when Roy Weinacht over on the Peachridge Glass facebook page, said “same mystery when it comes to Collinsville Medicine Co. – Horse Shoe Bitters (H 189) bottled during the same period.” in reference to the mystery surrounding the Yamara Cordial Bitters from Chicago.

Basically, in both cases, you have a bottle with scarce discoverable support information. What is even cooler, is that there is a Horse Shoe Bitters square (H 190). Both examples of the horse shoe bottles are pictured below. I would speculate or maybe just guess a direct relationship as the square may have been produced by the Horse Shoe Medicine Company in St. Louis prior to their move to Collinsville, Illinois in the late 1880s. Both specimens also have the word “Patent” embossed on the bottles. There is another strong lead that puts the square, Horse Shoe Bitters in Montgomery, Alabama as a hole was dug with one complete example and 9 or 10 broken examples.

The figural horse shoe bottle is such a favorite that there are many reproductions made by Wheaton Glass Company. If you “Google” Horse Shoe Bitters you will get page after page of listings for these later reproductions.

The Carlyn Ring and W.C. Ham listing in Bitters Bottles for the figural horse shoe is as follows:

I did confirm a listing for a Horse Shoe Bitters Company that moved from St. Louis to Collinsville, Illinois. In 1891, they were looking to expand their business. 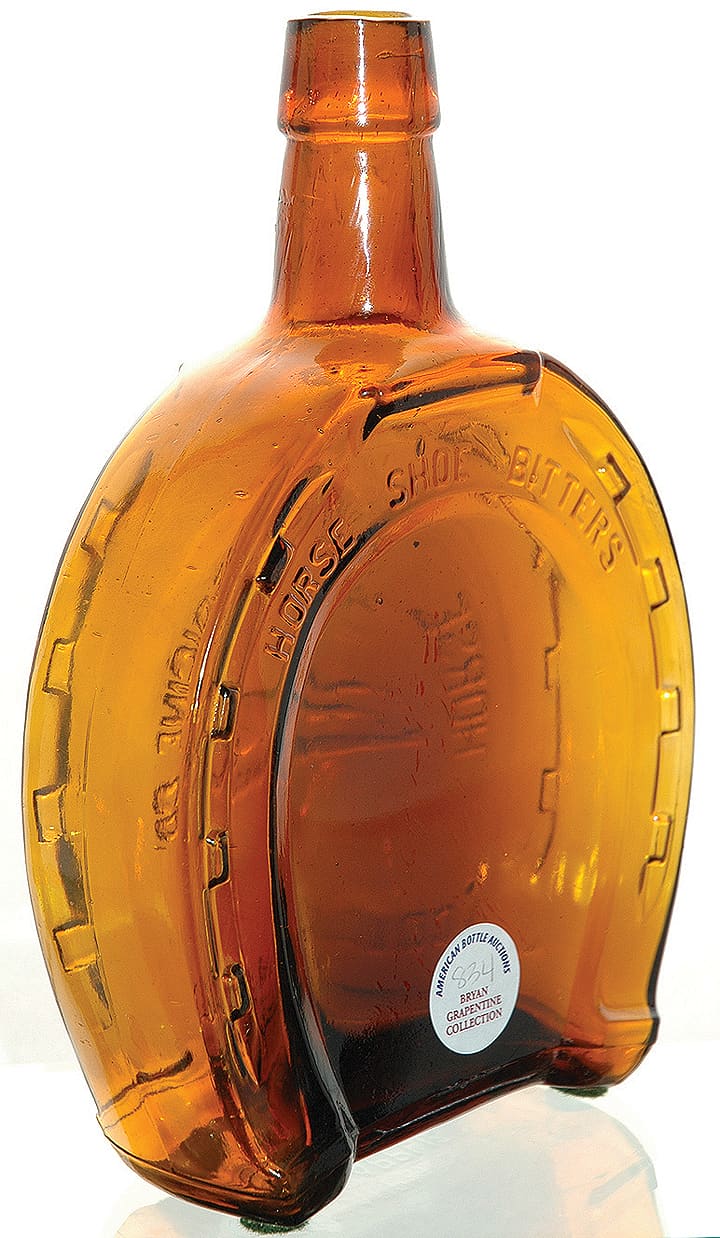 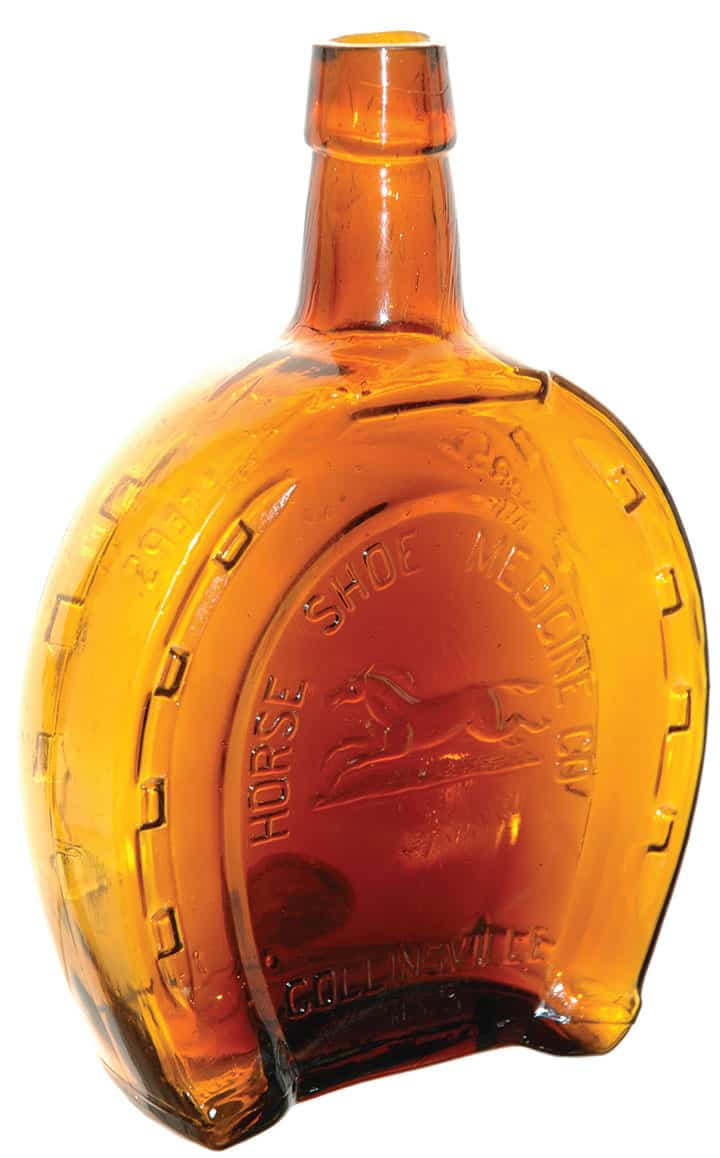 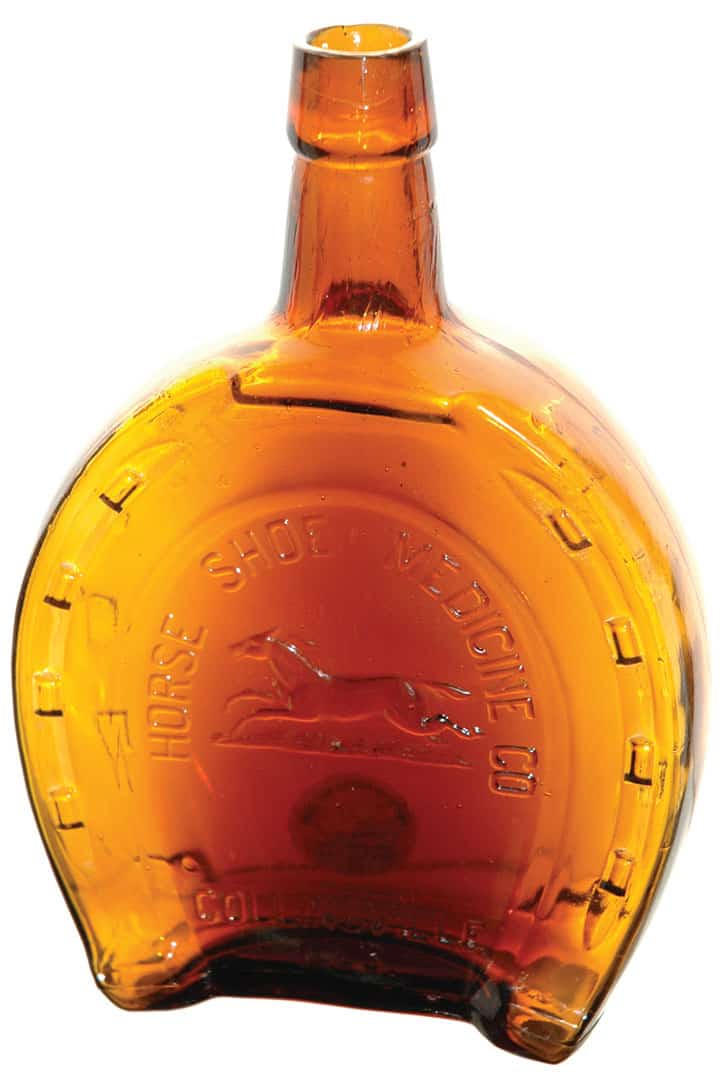 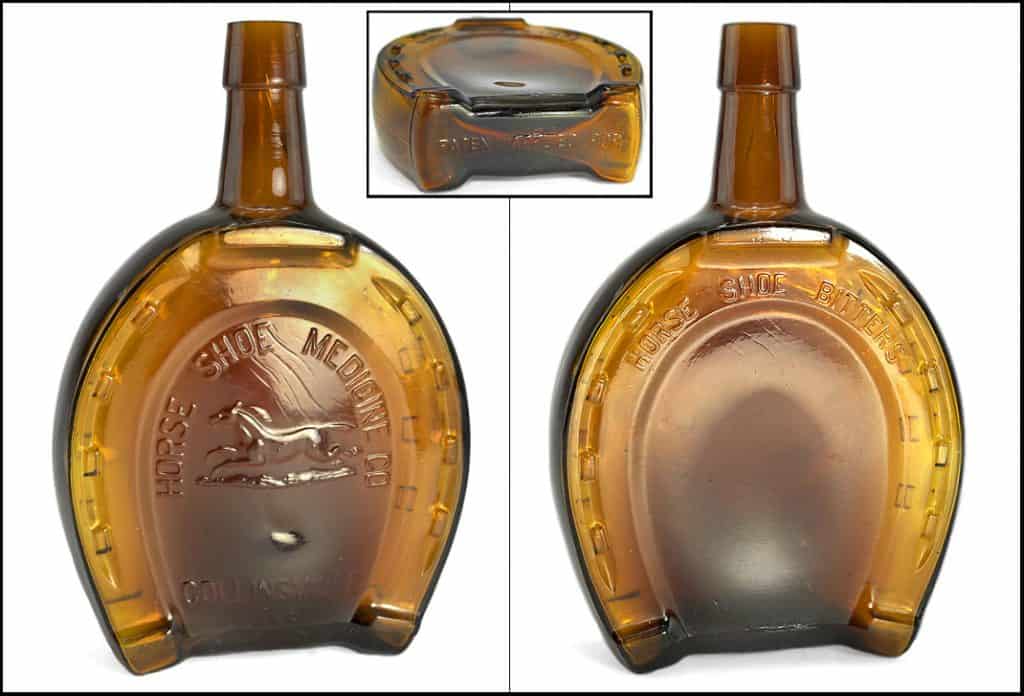 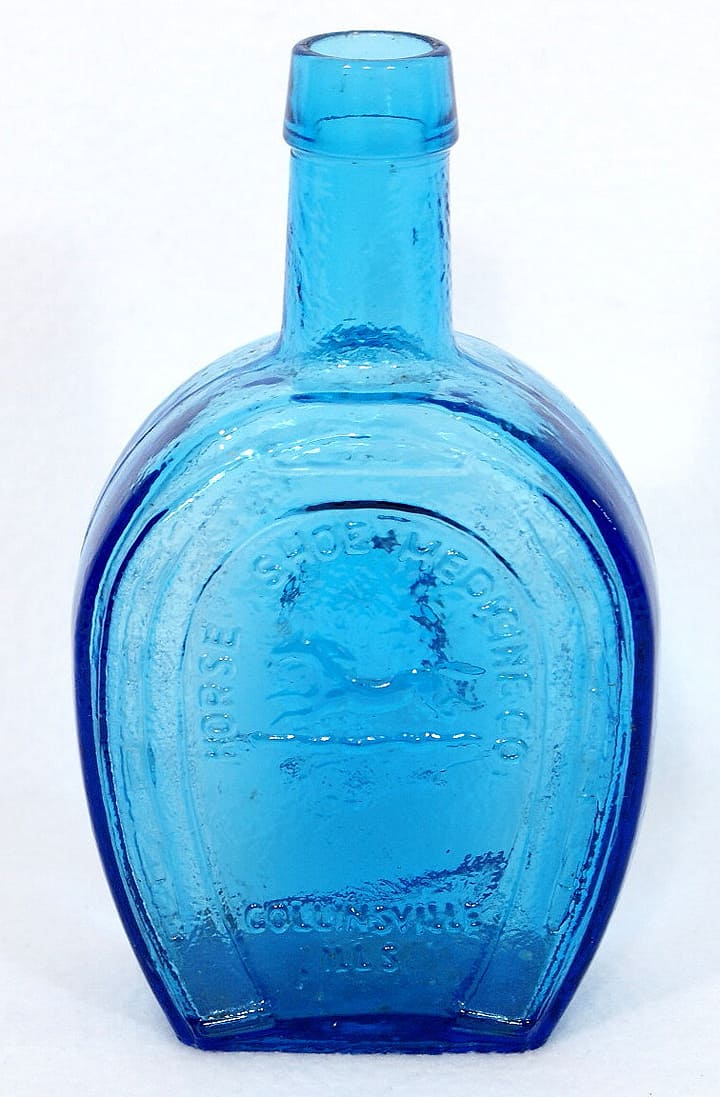 I was raised in Collinsville. I’ve talked to several people involved with the historical society. Lucille Stehman from Collinsville published a book about the history of Collinsville. In it, there is a picture in her book of a baseball team from the Hardscrabble Mine. They were also known as the Horseshoe Bitters. They started playing in the late 1800’s. The field they played on was the Hardscrabble field. There also used to be a saloon in Collinsville known as Hardscrabble. Lots of Hardscrabble references there. I sometimes think that the saloon might have been the bottling location. Such an ornate and expensive bottle to manufacture, yet little information about the medicine co. 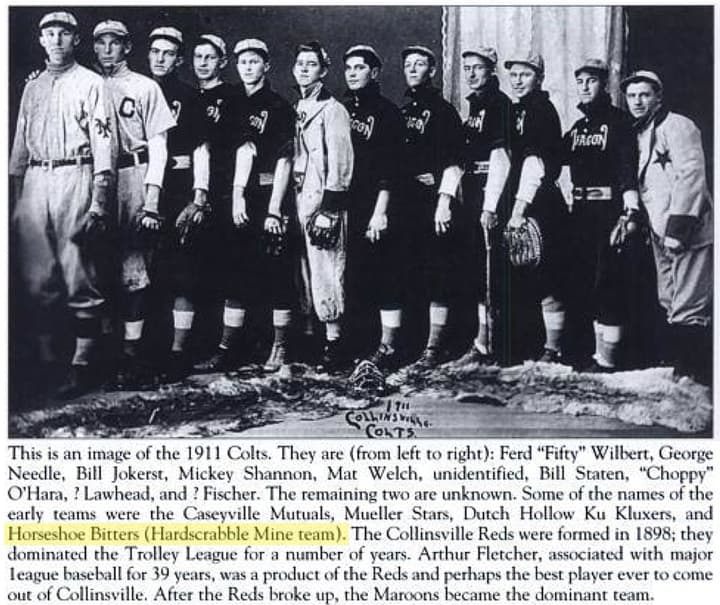 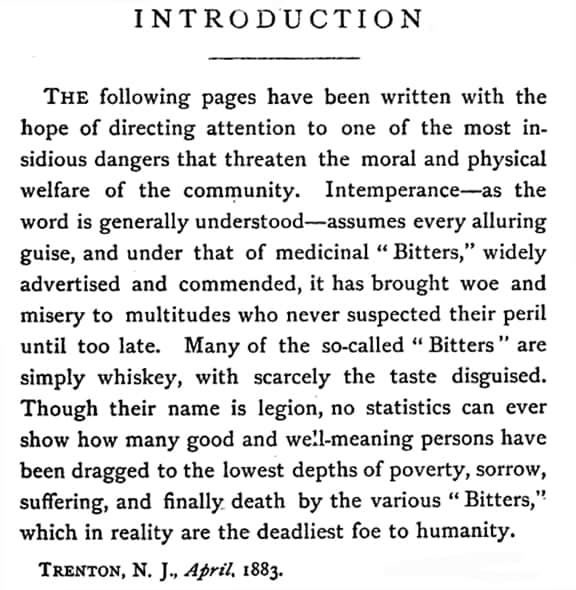 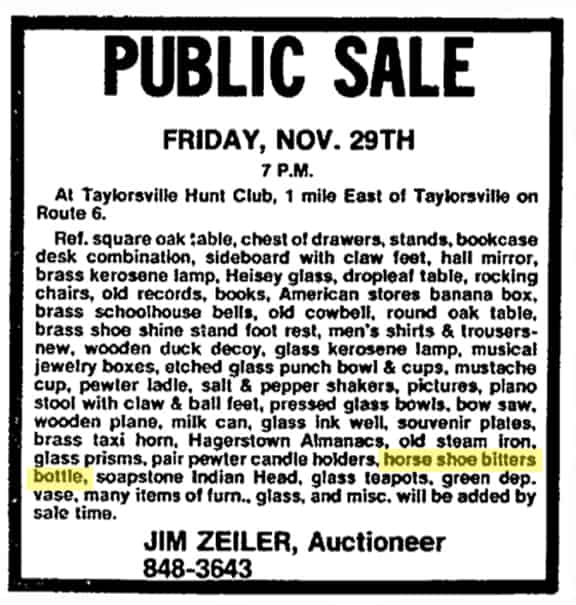 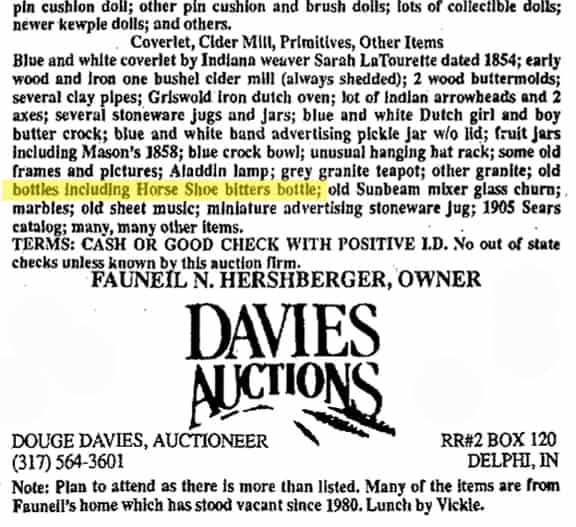 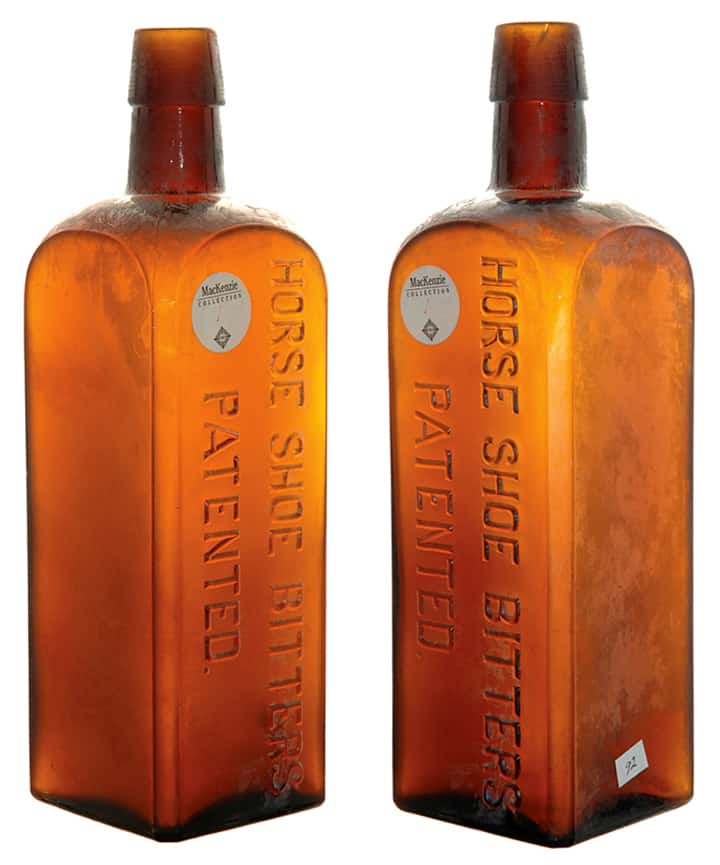 The Carlyn Ring and W.C. Ham listing in Bitters Bottles for the square is as follows:

“This bitters bottle was dug out of a old dump in Montgomery, Alabama years ago. At the time this bottle was found 9 or 10 other Horse Shoe Bitters were found all broken. Listed in the Rings Ham book on page 292 as very rare. Because we found the other broken Horse Shoe Bitters in the same dump but scattered all over the dump I believe this is a bitters that was produced in Montgomery, Alabama”

I believe this bottle may be from New Orleans, Louisiana based on the advertisement below. Need to find the patent. 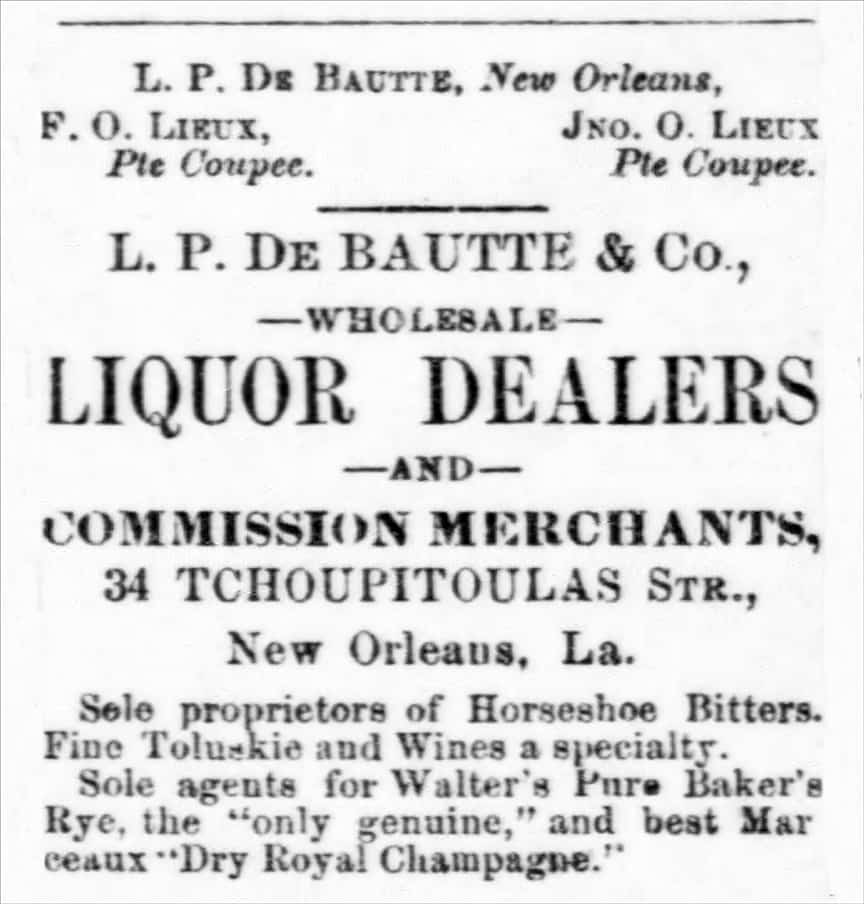 The newspaper advertisement above requires a new listing in Bitters Bottles Supplement 2. 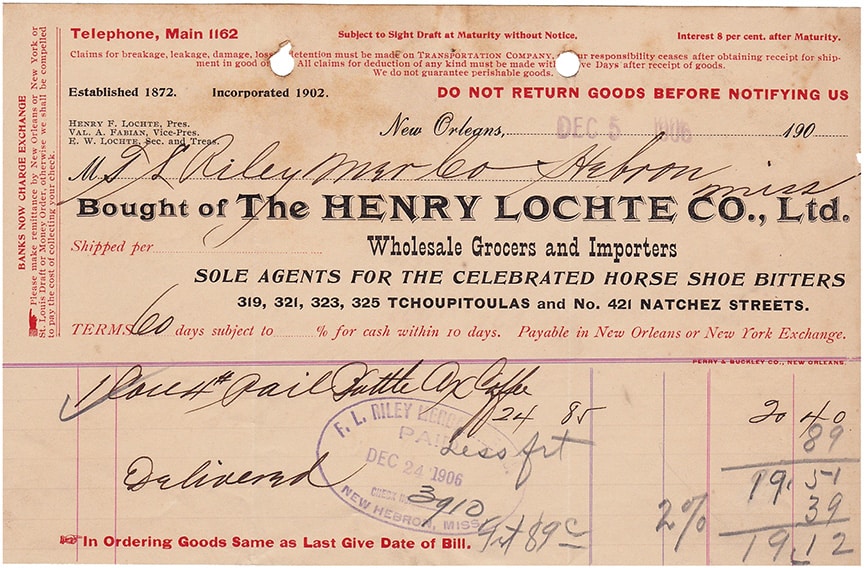 The billhead above requires a new listing in Bitters Bottles Supplement 2.

Read about another bitters bottle with a horse shoe: Bitter Witch – What a great name!

Ferdinand Meyer V is a native of Baltimore, Maryland and has a BFA in Fine Art and Graphic Design from the Kansas City Art Institute and School of Design. Ferdinand is the founding Principal of FMG Design, a nationally recognized design consultation firm. Ferdinand is a passionate collector of American historical glass specializing in bitters bottles, color runs and related classic figural bottles. He is married to Elizabeth Jane Meyer and lives in Houston, Texas with their daughter and three wonderful grandchildren. The Meyers are also very involved in Quarter Horses, antiques and early United States postage stamps. Ferdinand is the past 6-year President of the Federation of Historical Bottle Collectors and is one of the founding members of the FOHBC Virtual Museum.
View all posts by Ferdinand Meyer V →
This entry was posted in Bitters, Figural Bottles, History, Liquor Merchant, Medicines & Cures, Whiskey and tagged alabama, bitters, Bryan Grapentine, Collinsville, Collinsville Medicine Co., Hardscrabble Mine, Horse Shoe Bitters, illinois, Intemperance, Jack's Horseshoe, Lucille Stehman, MacKenzie, Meyer, Montgomery, Roy Weinacht, St. Louis, Temperance, Wheaton Glass Company. Bookmark the permalink.

2 Responses to The wonderful Horse Shoe Bitters from Collinsville, Illinois