In pursuit of more information regarding Duncan Edwards Crown Bitters, I came across a Canadian labeled Bitters called William’s Royal Crown Remedy and Bitters. Furthermore, do not see a designated number for this brand in Bitters Bottles or Bitters Bottle Supplement. I was quickly able to find an pretty cool advertising pamphlet (see below) which touted the benefits of this vile looking concoction. Read Pamphlet

I see that someone over at Antique-bottles.net has an example (pictured to the left) and wrote:

“I have this Williams Royal Crown Remedy and Bitters bottle. Anyone heard of it?”

“Still full with original contents. Original paper labels and box. One label in English, one in German (I think). The box is in pretty rough shape. I was told this came out of a drug store basement and was never opened, so I guess this is as close to “mint” as they come.”

I think its neat that the bottle has never been opened, but I’m not a fan of full bottles. In this case, the brown liquid really obscures the embossing. Is a bottle like this more collectible/valuable with the original contents or should I dump it?”

New Information 24 August 2014: I am working on my genealogy and Isaac Williams, the proprietor of this remedy, was my 3rd great grandfather. He was born on March 11, 1820 in Lincoln County, Ontario, Canada.

I think he sold the snake oil with his son, Peter Nelson Williams, who is listed as a “Medicine Man” in the 1891 Canadian census and as the owner of a “patent medicine firm” on his death registration in 1924 in London, Ontario. Apparently Peter Williams put “Dr.” in front of his name, although I’m fairly certain that he wasn’t even close to being a doctor. The Royal Crown Remedy probably disappeared after Peter’s death in 1924, although I’m not sure of that.

I hope this info is of interest to you and puts some flesh on the history of these bottles. 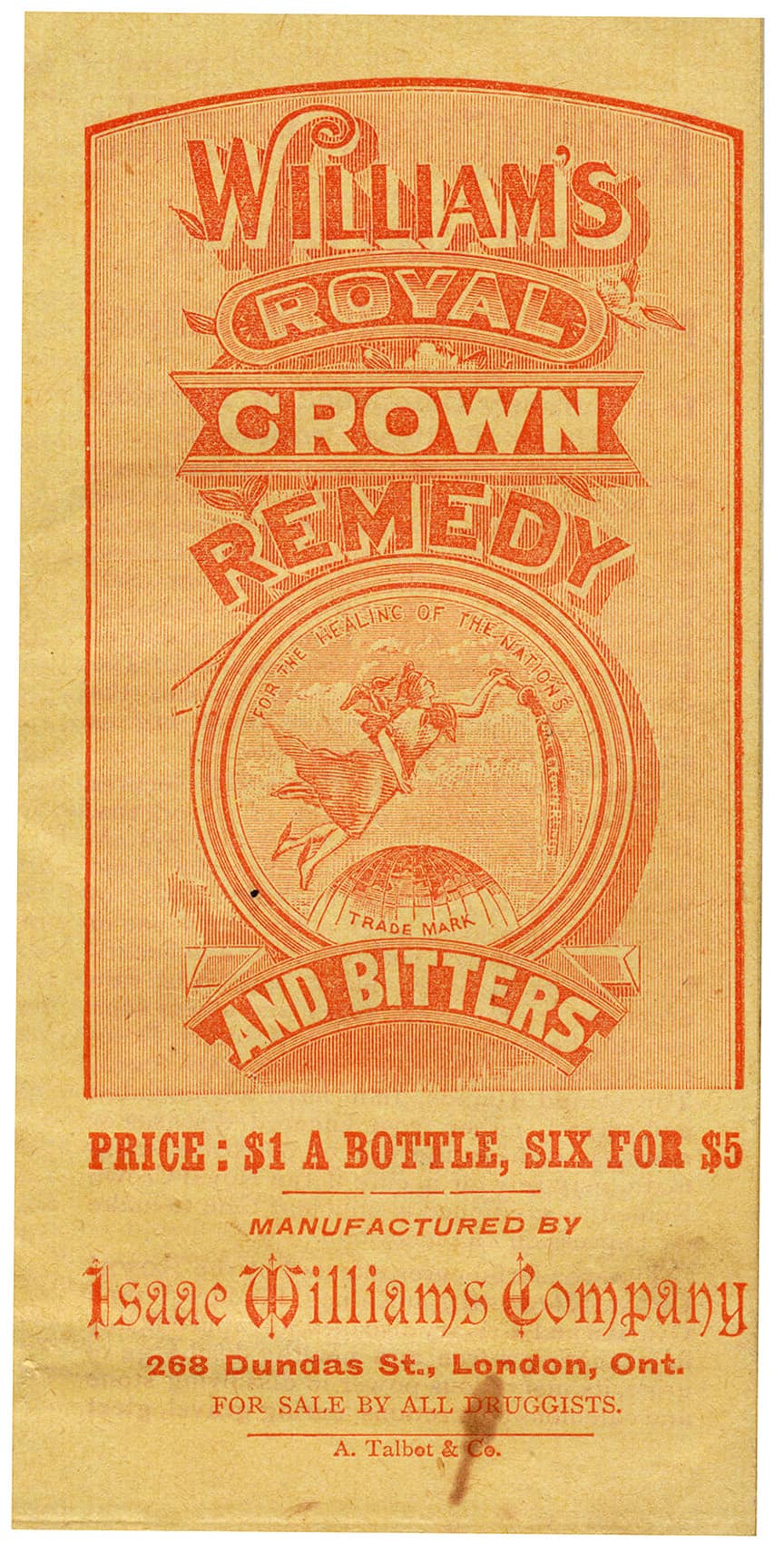 Ferdinand Meyer V is a native of Baltimore, Maryland and has a BFA in Fine Art and Graphic Design from the Kansas City Art Institute and School of Design. Ferdinand is the founding Principal of FMG Design, a nationally recognized design consultation firm. Ferdinand is a passionate collector of American historical glass specializing in bitters bottles, color runs and related classic figural bottles. He is married to Elizabeth Jane Meyer and lives in Houston, Texas with their daughter and three wonderful grandchildren. The Meyers are also very involved in Quarter Horses, antiques and early United States postage stamps. Ferdinand is the past 6-year President of the Federation of Historical Bottle Collectors and is one of the founding members of the FOHBC Virtual Museum.
View all posts by Ferdinand Meyer V →
This entry was posted in Advertising, Bitters, History, Medicines & Cures, Remedy and tagged Ackert, bitters, canada, Doctor, Isaac, Isaac Williams Company, London, Medicine, ontario, Onterio, Remedy, Williams. Bookmark the permalink.