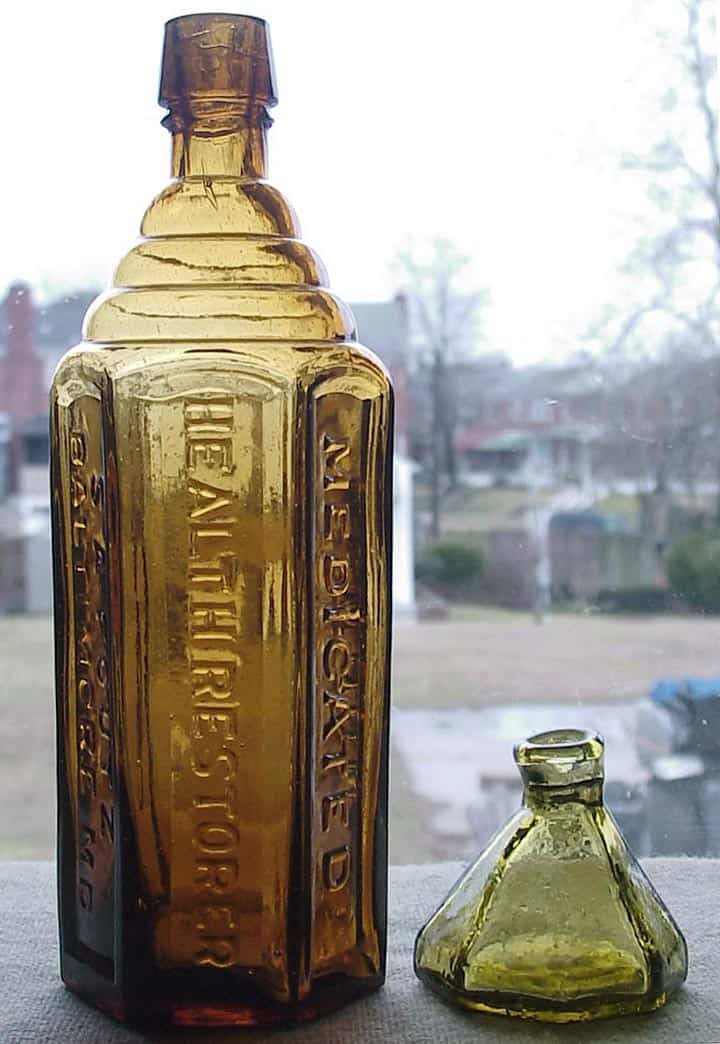 We have watched and admired the great looking London Medicated Health Restorer bottles from Baltimore, Maryland in recent auctions and posts. Just last week I pictured the puce example in the current American Glass Gallery Auction #10. Read: The puce London Medicated Health Restorer circles back. Now we need to figure out who S. A. Foutz is as his name is also embossed prominently on the bottle.

S. A. Foutz is Solomon A. Foutz. In 1857 or so, Solomon went into business with his brother David E. Foutz as S. A. Foutz & Bro. in Baltimore and manufactured and extensively sold such remedies known as “Foutz’s Horse and Cattle Powders” and “Foutz’s Liniment”. In 1867 Solomon sold out to his brother for a considerable sum of money. David E. Foutz became sole owner of all of the secret formulas, names, good will, stock of goods, and materials connected with the business. David kept the S. A. Foutz & Bro. name and until his death in 1877. Business was later conducted by his widow which evolved into a Trade-Marks and Trade Names – Unlawful Competition lawsuit (see legal case below). 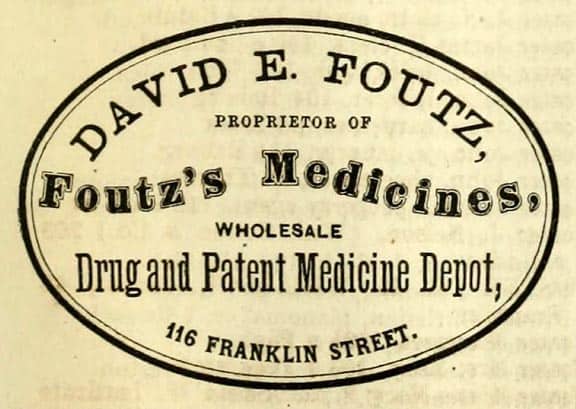 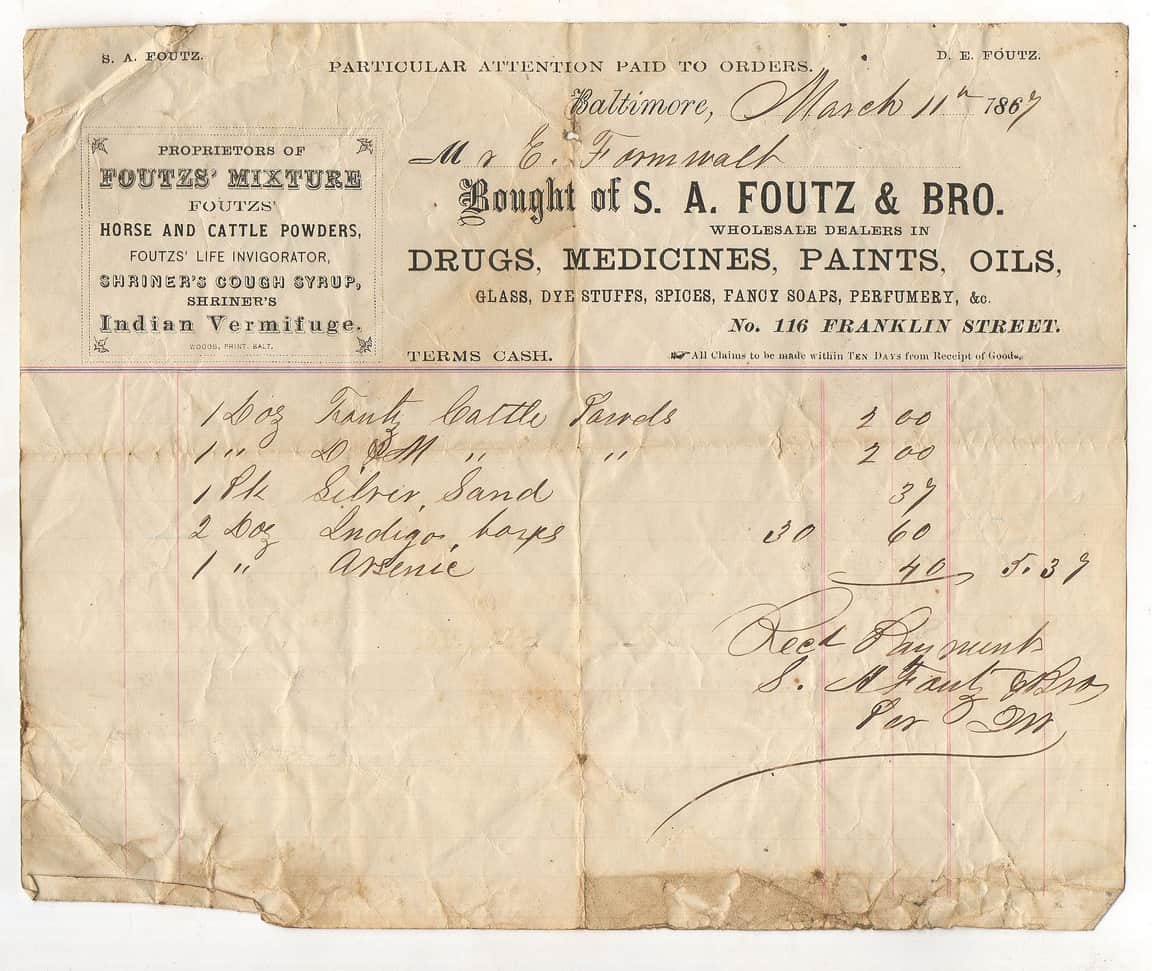 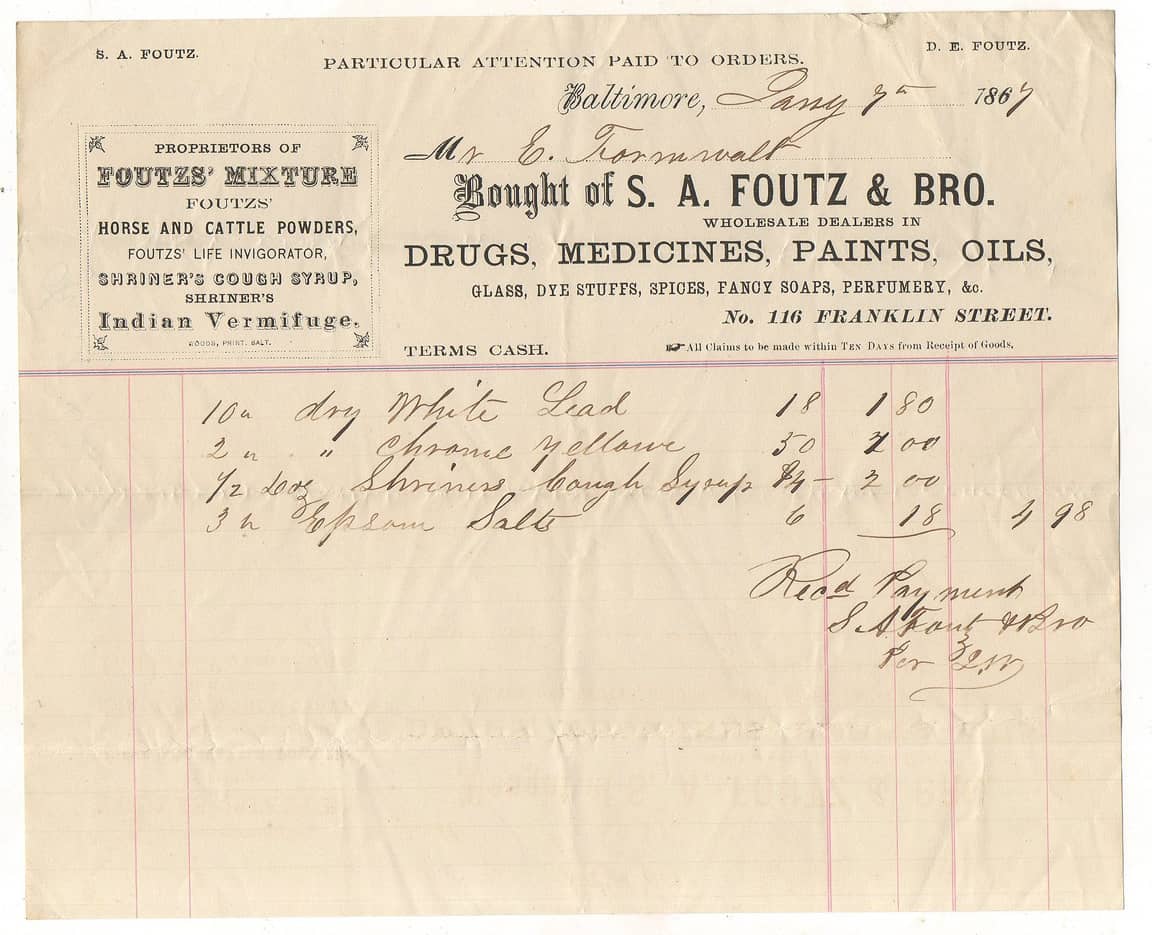 The representation of the pansy in five petals. In the center of each petal is the head of a horse, cow, sheep, hog, and two chickens. Across the bottom and extending through the stem and leaves is a facsimile if the signature of “S. A. Foutz” 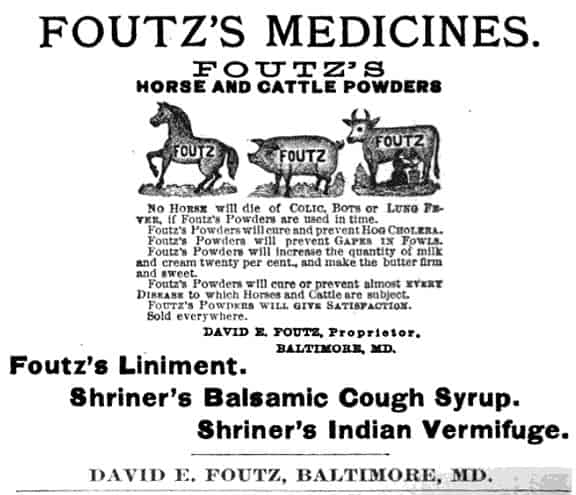 Foutz’s Medicines advertisement – Our police: A history of the Baltimore force from the first watchman to the latest appointee – 1888 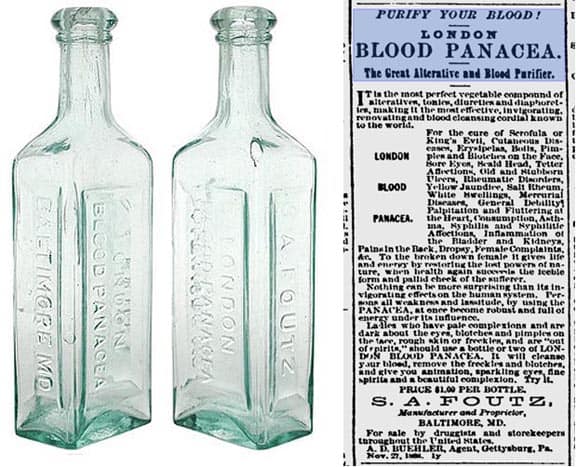 Here is a product of S. A. Foutz, London Blood Panacea that uses “London” in the name just as the London Medicated Health Restorer. Advertisement from the Gettysburg Compiler – July 2, 1869 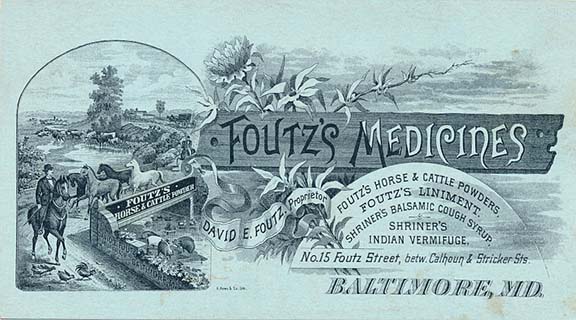 Trade-Marks and Trade Names – Unlawful Competition – Use of Peoples Names

In 1867 (why not 1857?), David B. Foutz and Solomon A. Foutz, partners, under the name S. A. Foutz Bro., began to manufacture certain animal remedies which became widely and favorably known and advertised. Solomon A. Foutz sold out to his brother, who greatly extended the business, which on his death was conducted by his widow, who thereafter formed plaintiff corporation, to which the business formulas, trade-marks, etc., were transferred, and plaintiff on January 28, 1908, registered the word “Foutz’s” in the Patent Office as Its trade-mark. Stanley A. Foutz, son of Solomon, an attorney, organized defendant corporation under the name S. A. Foutz Stock Food Company, and commenced to sell other animal remedies intended for the same purpose as those prepared by complainant under names embracing the name “Foutz’s,” and cautioned purchasers to look for the name “S. A. Foutz” and the patent trade-mark to get the genuine. Bold, that defendant’s act constituted unlawful competition, and that it’s corporate name should be amended to include the full name “Stanley A. Foutz,” and that the word “Foutz” on defendant’s packages, circulars, advertisements, and literature should only be used in connection with a statement that the material was prepared from the formulas of “Stanley A. Foutz,” and that the goods were not prepared by complainant successor to the original Foutz Company.

The bill alleges that about 50 years ago, two brothers, David E. Foutz and Solomon A. Foutz, partners trading as S. A. Foutz & Bro., manufactured and extensively sold certain remedies known as “Foutz’s Horse and Cattle Powders” and “Foutz Liniment,” which became well known articles of commerce. In 1867, about 40 years ago, Solomon A. Foutz sold out, for a considerable sum of money, his interest in the business to his brother and partner, David E. Foutz, and David E. Foutz became the sole owner of all the secret formulas, names, good will, stock of goods, and materials connected with the business of manufacturing and selling the Foutz cattle medicines and remedies, and he continued the business under the name of S. A. Foutz & Bro. until his death, in 1877.

Under the sole proprietorship of David E. Foutz, the business was greatly extended, and large sums were spent in advertising; the said David E. Foutz having spent in 1871 and 1872 as much as $55,000 in advertising in those two years. The bill alleges that the cattle remedies became extensively known as the Foutz remedies, and particularly certain remedies designated as “Foutz’s Celebrated Horse and Cattle Powders,” “Foutz’s Superior Poultry Food,” “Foutz’s Certain Worm Powder,” “Foutz’s Certain Colic Cure,” “Foutz’s Healing Powder,” and “Foutz’s Liniment,” and the name “Foutz’s” became widely known as distinguishing the preparations and remedies manufactured by the said S. A. Foutz & Bro., and the said word “Foutz” has acquired a secondary meaning indicating the medicines and remedies prepared by the said David E. Foutz, trading as S. A. Foutz & Bro., and by the complainant as his successor, which preparations are generally known to the trade and to users, and distinguished from all other preparations, by the use in connection therewith of the word “Foutz’s.” That the said David E. Foutz, trading as S. A. Foutz & Bro., continued the said business as the sole proprietor of said preparations, formulas, and trade-marks, widely extending the said business, until his death, in 1877, and thereafter said business was continued by his widow as the sole proprietor under the same name until 1903, when she caused the plaintiff corporation, the David E. Foutz Company, to be formed, which took over and became proprietor of the business, including the formulas, names, good will, stock, and materials, and continued to use the word “Foutz’s” as a trade-name for the various preparations before mentioned. On January 28, 1908, the plaintiff caused to be registered in the United States Patent Office the word “Foutz’s” as its trade-mark for remedies for the ailments and diseases of horses, cattle, and other stock, alleging that it had been continuously in such use by the complainant and its predecessors in business since 1858.

The bill recites that the S. A. Foutz Stock & Food Company of Baltimore City, incorporated in 1904, became insolvent in 1906, and all its assets were sold, and Stanley A. Foutz became the purchaser and thereupon caused to be incorporated the S. A. Foutz Stock Food Company, under the laws of the territory of Oklahoma, and transferred to it the said assets, and that said S. A. Foutz Stock Food Company of Oklahoma still continues to commit the before-mentioned frauds upon the public, and by its agents and salesmen are making false statements with regard to the business of both complainant and defendant, and is greatly and irreparably injuring the complainant’s business and is fraudulently selling its goods as the goods made by the complainant, and depreciating the good name and reputation of the complainant’s goods.

The defendant by its answer, by way of defense, asserts: That the only similarity in the goods of the parties to the suit is the word “Foutz’s,” and that is the proper name of the organizer, president and largest stockholder of the defendant corporation, whose name is Stanley A. Foutz; that in the manufacture of its goods the defendant uses formulas made by said Stanley A. Foutz; that it has adopted for its trade-mark a pansy conspicuously displayed on all its circulars and wrappers; that the name “S. A. Foutz’s” is printed in large, bold type on said wrappers with the words “manufactured only by S. A. Foutz Stock Food Company, Baltimore, Md.”; and that there is no similarity in color, shape, or size between the packages of its goods and those of the complainant.

The facts appear, to be as stated in the bill of complaint and in the answer. The business of preparing and selling the Foutz cattle remedies having been established for so many years, and the preparations having come to be widely known as Foutz’s medicines and preparations, and the complainant having become the sole and exclusive owner of the long-established business, with its formulas, trade-names, and good will, it is obvious that no one can carry on the same business, in the same territory, using the name “Foutz,” without manifest injury to the complainant. It is also quite obvious that Stanley A. Foutz, whose father had sold his share in the business to the complainant’s predecessor, and who is himself a lawyer and not a manufacturer of horse and cattle medicines, went into the rival and competing business for the reason that the use of the family name “Foutz” would at once give to this business venture the advantage of the established reputation that the Foutz remedies had acquired by years of use and advertising. The defendant puts on his circulars this caution: “Always look for the name S. A. Fontz and the pansy trade-mark and you will get the genuine. Accept no other. Manufactured only by S. A, Foutz Stock Food Co., Old York Road, Baltimore, Md.”

Ferdinand Meyer V is a native of Baltimore, Maryland and has a BFA in Fine Art and Graphic Design from the Kansas City Art Institute and School of Design. Ferdinand is the founding Principal of FMG Design, a nationally recognized design consultation firm. Ferdinand is a passionate collector of American historical glass specializing in bitters bottles, color runs and related classic figural bottles. He is married to Elizabeth Jane Meyer and lives in Houston, Texas with their daughter and three wonderful grandchildren. The Meyers are also very involved in Quarter Horses, antiques and early United States postage stamps. Ferdinand is the past 6-year President of the Federation of Historical Bottle Collectors and is one of the founding members of the FOHBC Virtual Museum.
View all posts by Ferdinand Meyer V →
This entry was posted in Advertising, Druggist & Drugstore, History, Medicines & Cures, Questions, Veterinary and tagged Baltimore, Chris Rowell, David B. Foutz, David E. Foutz, Foutz's Medicines, London Medicated Health Restorer, maryland, pansy, S. A. Foutz & Bro., S.A Foutz, Solomon A. Foutz, Stanley A. Foutz. Bookmark the permalink.