An advertisement for an unlisted Clayton’s Celebrated Rheumatic Bitters 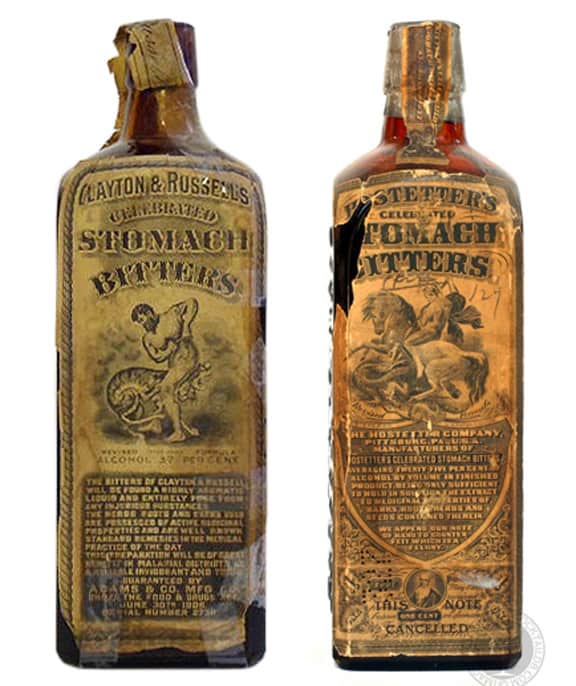 An advertisement for an unlisted Clayton’s Celebrated Rheumatic Bitters

While perusing Pittsburgh Directories in the late 1850s and 1860s for Zingari Bitters, I can across an advertisement (on the same page as the Zingari’s ad) for Clayton’s Celebrated Rheumatic Bitters and Liniment (below) put out by William Clayton & Son (William Clayton & C. E. Clayton).

I didn’t recall this specific brand although I was aware of Clayton & Russell’s Celebrated Stomach Bitters and wanted to see if there was a relationship. Hmmmm…. sure sounds like a Hostetter’s Celebrated Stomach Bitters. Usually, when an advertisement, more than a listing, occurs in a city directory, it means that a product is trying to get a lot of attention or is popular. I wonder what this bottle looks like? It is also interesting that there are no previous listings in any of the Bitters books that mention the bitters noted in the advertisement. 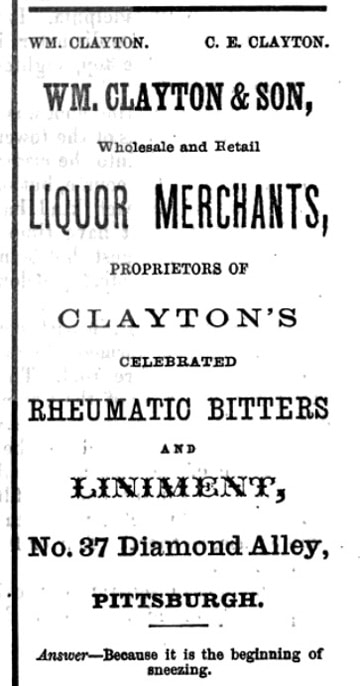 Here is the advertisement that first got me interested in this post. Clayton’s Celebrated Rheumatic Bitters and Liniment advertisement – Leisure Hours (Pittsburgh Quarterly), Volume 1, December 1858 – Pittsburgh

Obviously, the time period here is far enough apart to dictate that Clayton’s Celebrated Rheumatic Bitters be considered as unlisted in Bitters Bottles and the Bitters Bottle Supplement. This is most likely a predecessor to the listed label only, Clayton & Russell’s Celebrated Stomach Bitters. The Carlyn Ring and W.C. Ham listing for the later, Clayton and Russell’s is as follows:

Label: This bottle is embossed by the glass manufacture on the base of the bottle. Its reads A & Co. which stands for the John Agnew and Co., Pittsburgh, PA. The bottle label reads as follows CLAYTON & RUSSELL’S / CELEBRATED / STOMACH / BITTERS. (Has a picture of a nude man fighting with a two headed animal). Revised Trademark Formula / Alcohol 37 per cent / The Bitters of Clayton & Russell will be found a highly aromatic liquid and entirely free from any injurious substances. The herbs roots and barks used are possessed of active medicinal propitious and are well known. Standard remedies in the medical practice of the day. This preparation will be of great benefit in malarial districts as a reliable invigorant and tonic. Guaranteed by Adams & Co. MFG. under the food and drugs act. June 30th 1906. Serial number 2736. [Label information from Frank Wicker at Bottle Pickers] 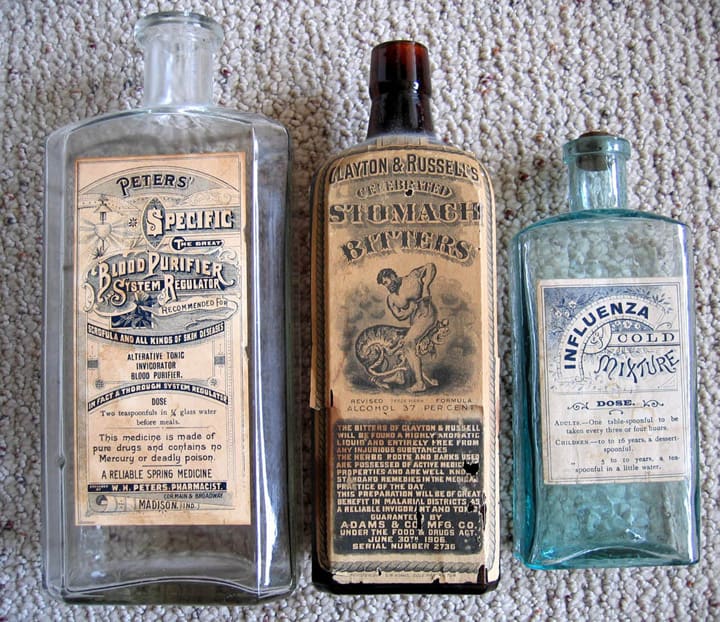 I was quickly able to pinpoint a William Clayton as a Liquor Merchant in an 1860 Pittsburgh directory (see above). Other directories of this era support the finding. Pre-Pro.com actually lists him only in an 1870 directory in Pittsburgh.

1881 – The Federal Reporter: Cases Argued and Determined in the Circuit and District Courts of the United States, Volumes 9-10

Read More: Saint George the Dragon Slayer – Not only on Hostetter’s

It is also interesting to note that on the same page as Clayton’s Celebrated Rheumatic Bitters advertisement, was this advertisement for Wm. M’Cully & Co. Glass Works (see above). At the bottom of the advertisement, it says “Particular attention paid to Private Moulds and Orders filled with promptness and dispatch”. I would suspect that if a bottle ever showed up, it might have a M’Cully & Co. embossing on the bottom. The later, labeled bottle is based embossed A & Co. which stands for the John Agnew and Co., Pittsburgh, PA. 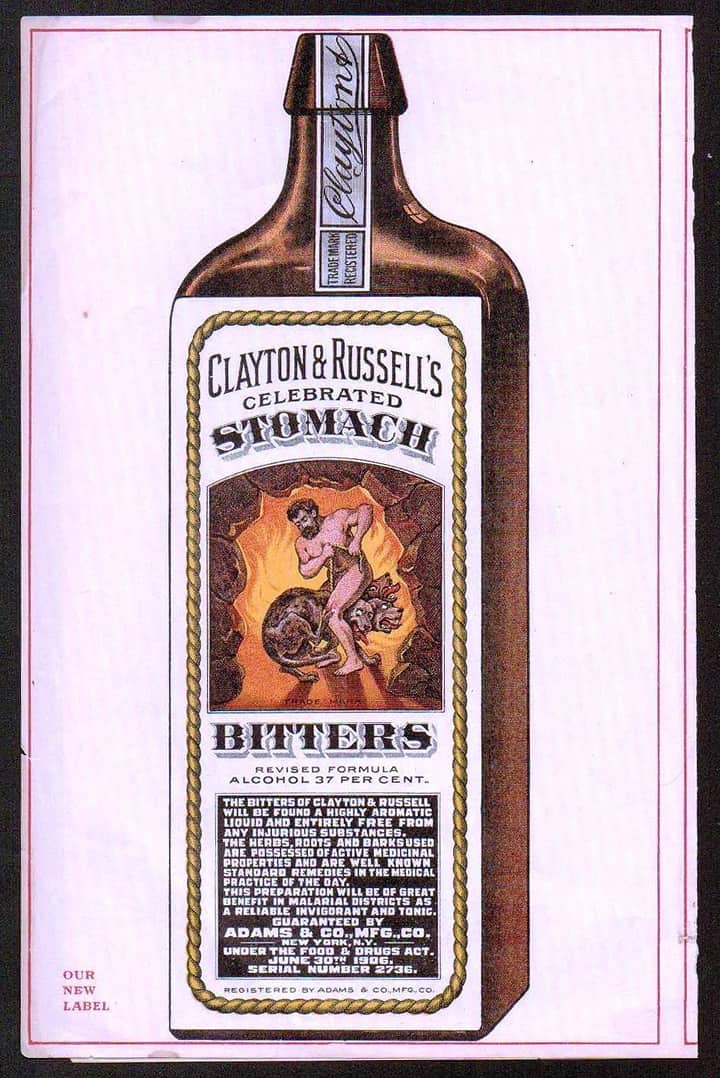 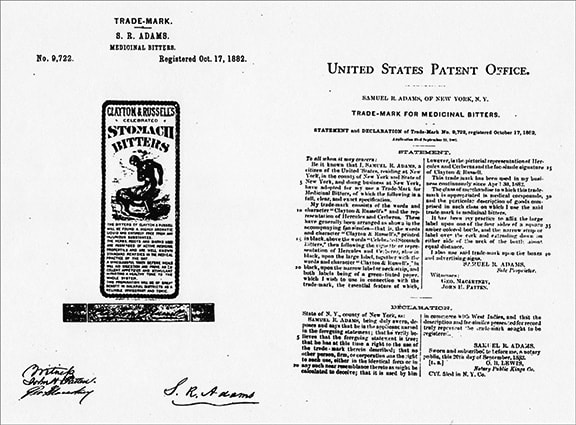 Ferdinand Meyer V is a native of Baltimore, Maryland and has a BFA in Fine Art and Graphic Design from the Kansas City Art Institute and School of Design. Ferdinand is the founding Principal of FMG Design, a nationally recognized design consultation firm. Ferdinand is a passionate collector of American historical glass specializing in bitters bottles, color runs and related classic figural bottles. He is married to Elizabeth Jane Meyer and lives in Houston, Texas with their daughter and three wonderful grandchildren. The Meyers are also very involved in Quarter Horses, antiques and early United States postage stamps. Ferdinand is the past 6-year President of the Federation of Historical Bottle Collectors and is one of the founding members of the FOHBC Virtual Museum.
View all posts by Ferdinand Meyer V →
This entry was posted in Advertising, Bitters, Glass Makers, History, Liquor Merchant, Questions and tagged C. E. Clayton, Clayton & Russell's Celebrated Stomach Bitters, Clayton's Celebrated Rheumatic Bitters, Hostetter's, John Agnew and Co., M'Cully & Co., Pittsburgh, William Clayton, William Clayton & Son. Bookmark the permalink.