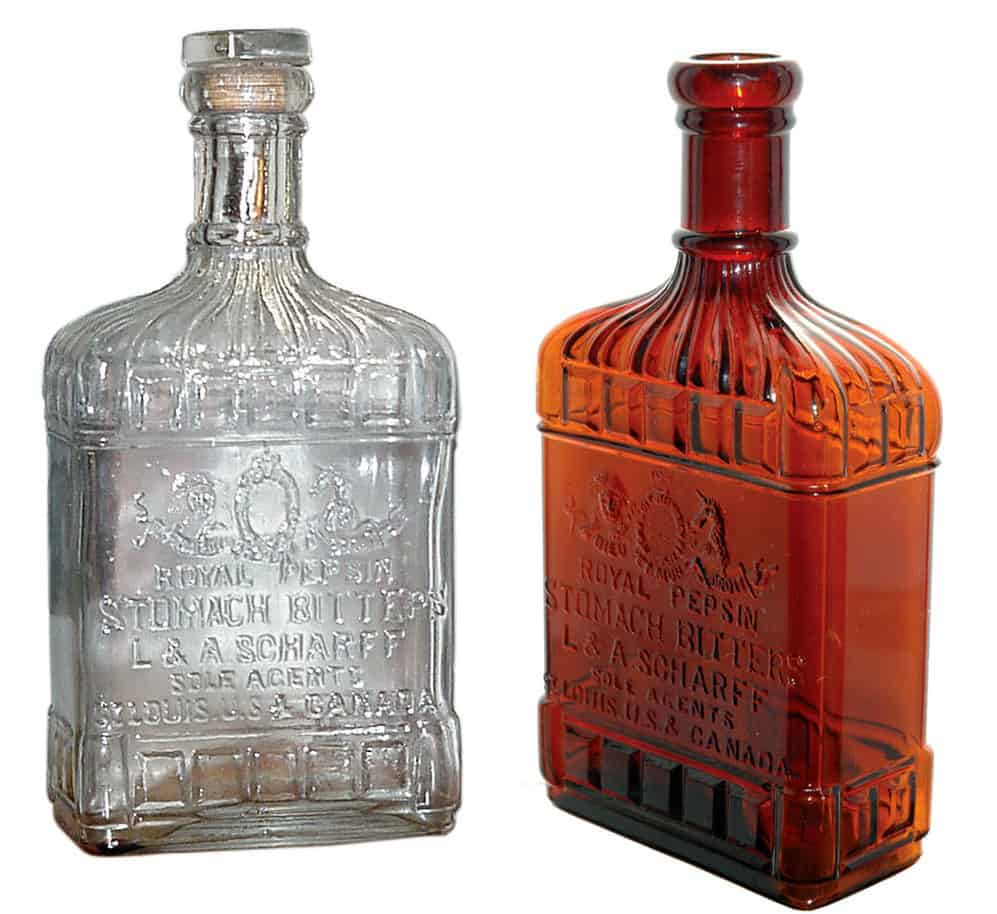 “Shamed be he who thinks evil of it”

Up for your consideration is this very nice, very scarce Royal Pepsin Bitters bottle in Clear glass standing 9″ tall with the original glass Stopper, making it 9 3/8″ tall. In Picture #3, at about 7 O’clock, you can see the Glass stopper has a 1/2″ by 3/8″ chip out of the stopper only. The bottle is very nice with just some light spotty, mostly inside, haze and some content stain mostly at the bottom. The stopper is stuck very tight, so didn’t try to force it out and clean the inside. A really scarce, Nice Royal Pepsin Bitters bottle, especially in the Clear glass. 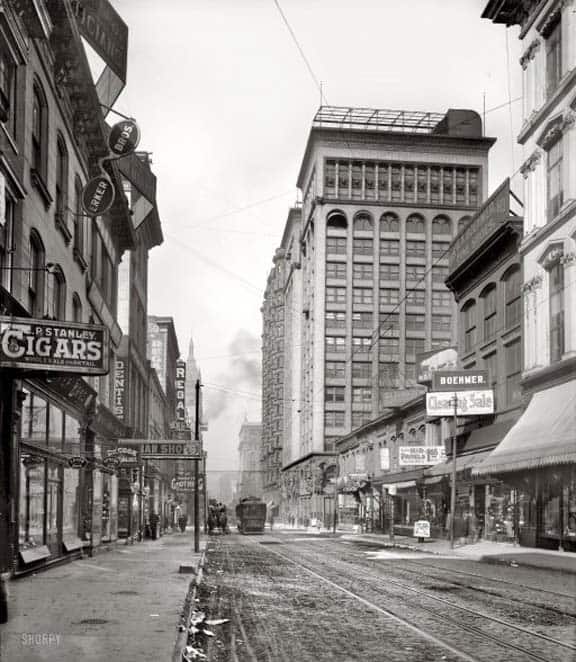 Closing on ebay yesterday was a great example of a clear Royal Pepsin Stomach Bitters. A later St. Louis bitters brand that is typically seen in amber, this clear example soared to a very healthy close at $510 with 8 bids. More evidence of a broadening and healthy bitters market. Also interesting that a clear example showed up on one of Elvin Moody’s bottle shelves. 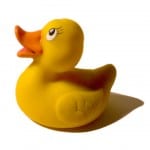 Lazarus and Adolph Scharff tried hard to promote the medicinal values of their product and even sold it in drug stores but make no mistake, this is a spirit that should have been and probably was sold at liquor stores. The label does try hard to say the medical powers of the product, but if it looks like a duck, swims like a duck, and quacks like a duck…

Read: The Scharffs: Love (and Money) in a Time of Malaria

“Children, delicate women and persons in debilitated state should commence by taking small doses and increase with their strength” 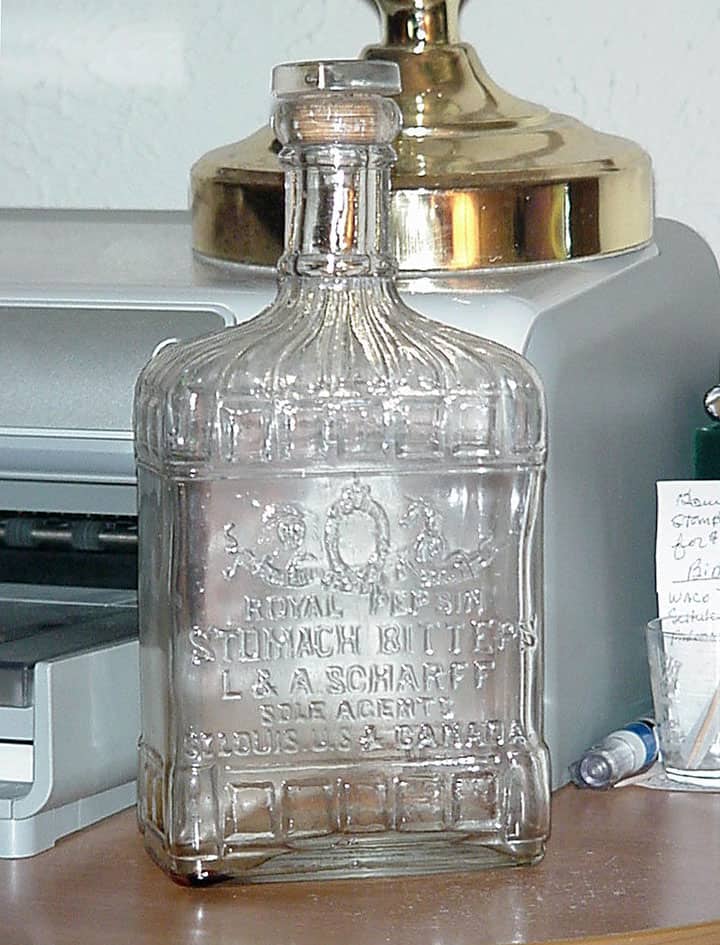 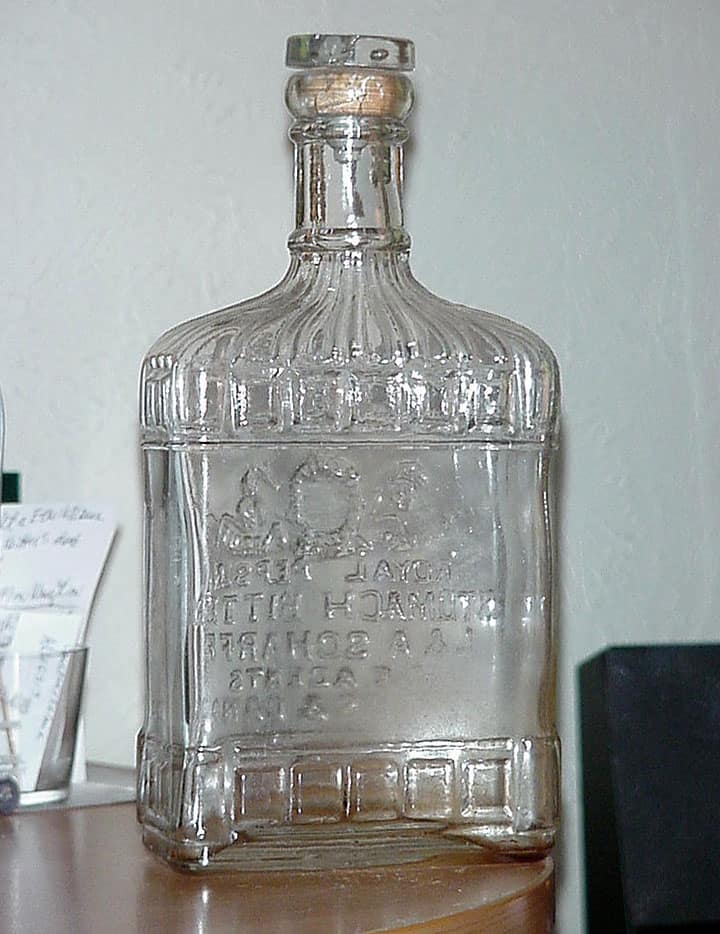 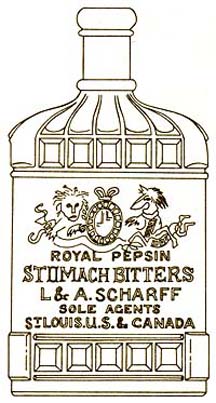 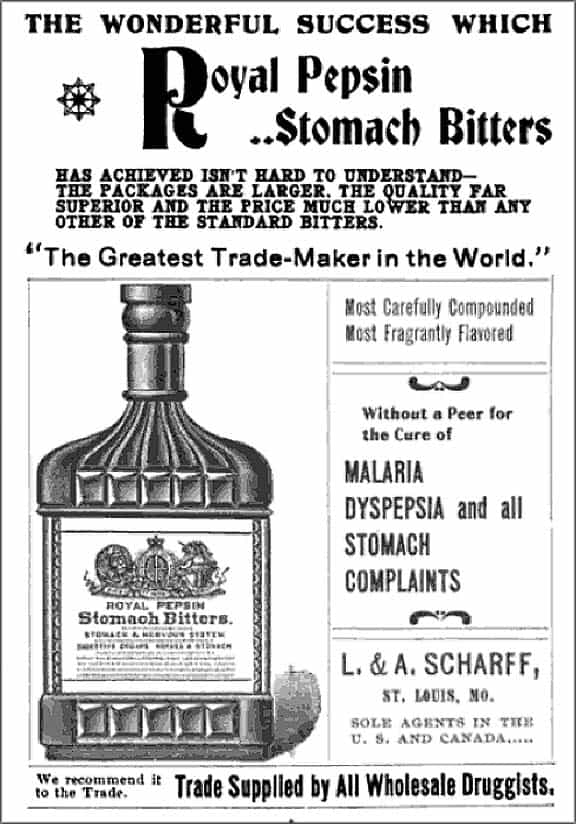 Adolph Scharff: (wholesale liquors, partner with brother Lazarus) was born in Essingen, Daun, Rheinland-Pfalz, Germany on 01 June 1846. He arrived in America around 1862 – 1864. He spent a short time in Cairo, Illinois and from there went to Vicksburg, Mississippi and became a clerk in the dry goods house of Scharff Brothers. In 1870, with brother Lazarus, opened a wholesale liquor business in Vicksburg, continuing until 1876, when removed stock to St. Louis, where firm continued business as L. & A. Scharff until 1906; then incorporated as L. & A. Scharff Distilling Co. In St. Louis, Adolph  primarily livied at 3104 Washington Avenue. His wife was Jeanette Meyer. They were married in Montgomery, Alabama on 07 May, 1874.

In the 1840s and 50s, St. Louis received a large number of German and Irish emigrants. Germans who could afford the voyage came to St. Louis to escape political unrest in their country. They settled in St. Louis, close to the area in Mid-Missouri where other German settlers established homes due to the geographical similarity of Missouri and the German wine country. 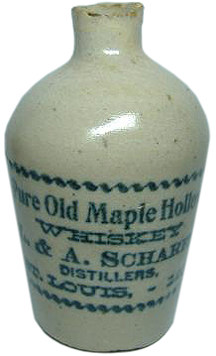 “Honi soit qui mal y pense” (embossed on bottle) is a French phrase meaning: “Shamed be he who thinks evil of it”. The phrase is sometimes archaically rendered as “Honi soit quy mal y pense”, “Hony soyt qe mal y pense” and various other phoneticizations. It is the motto of the English chivalric Order of the Garter. [Wikipedia] 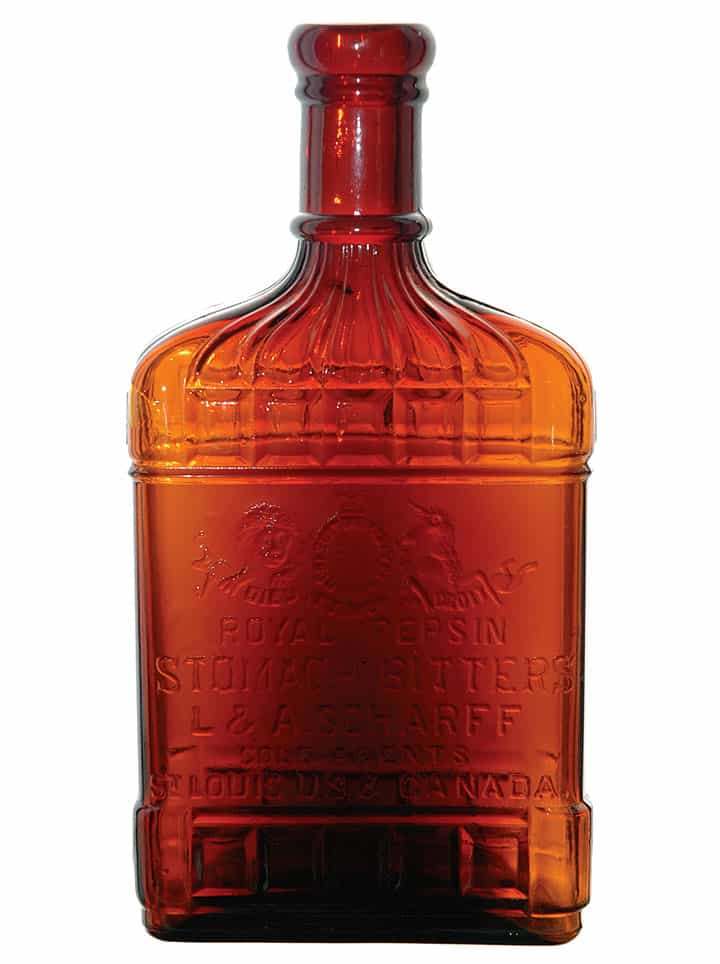 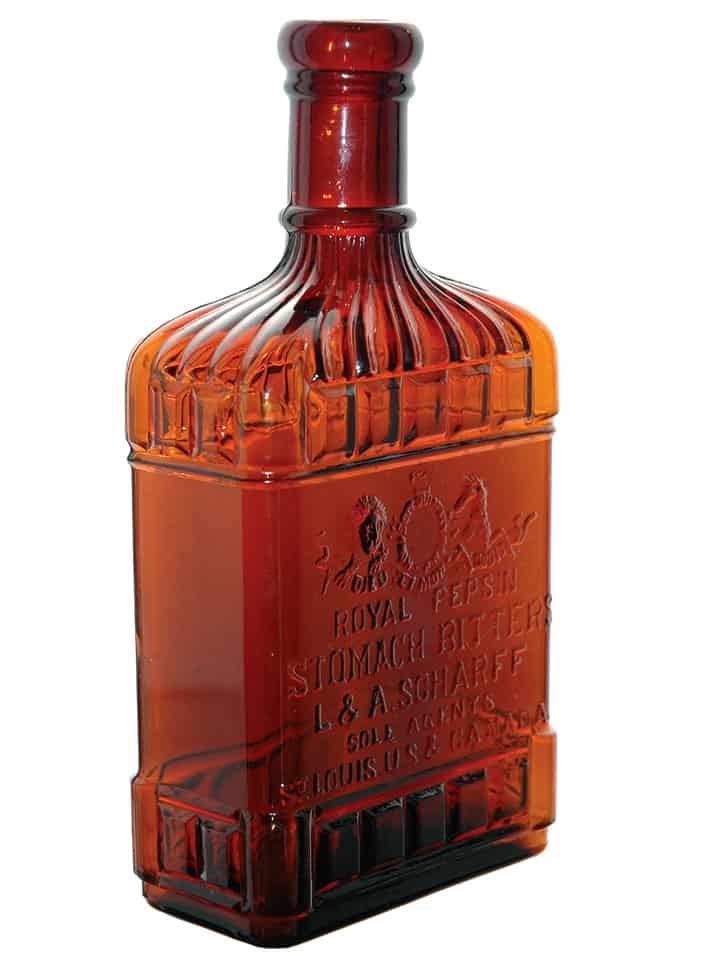 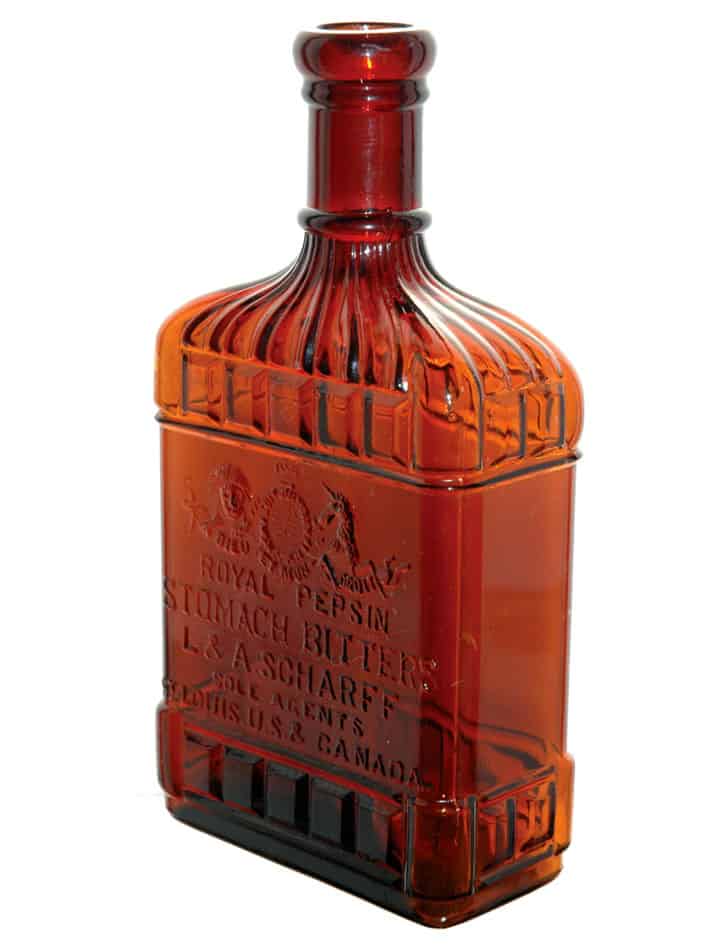 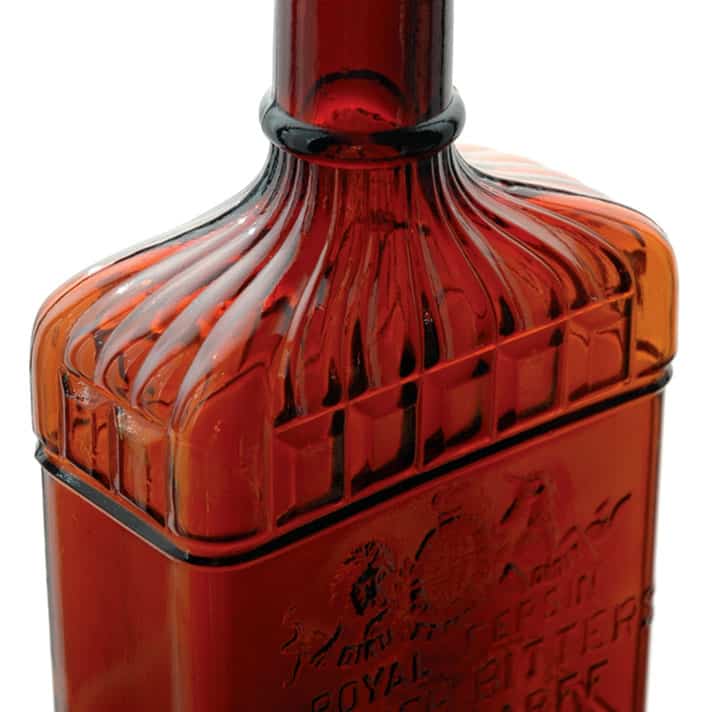 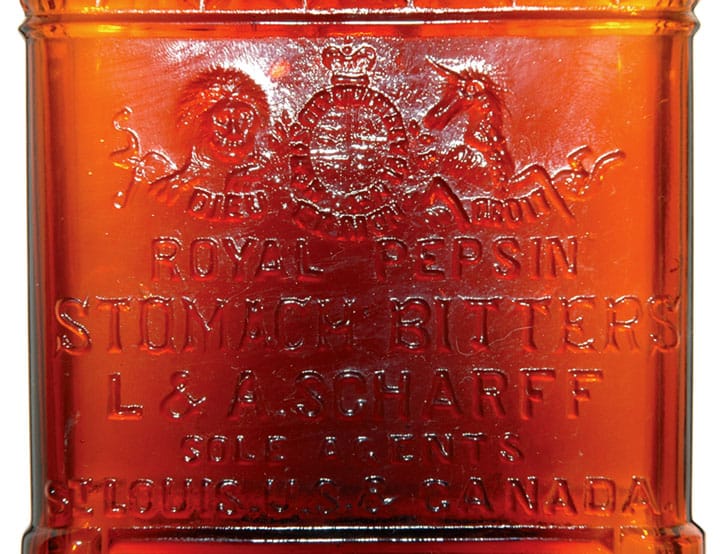 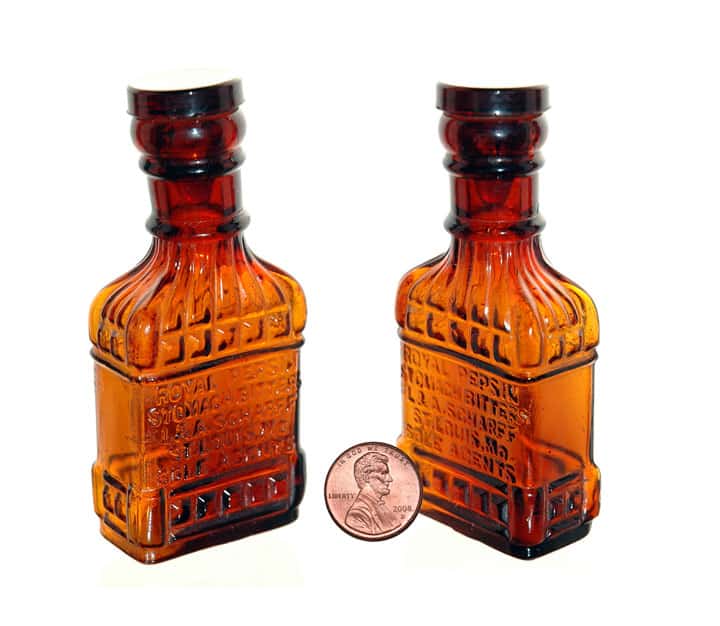 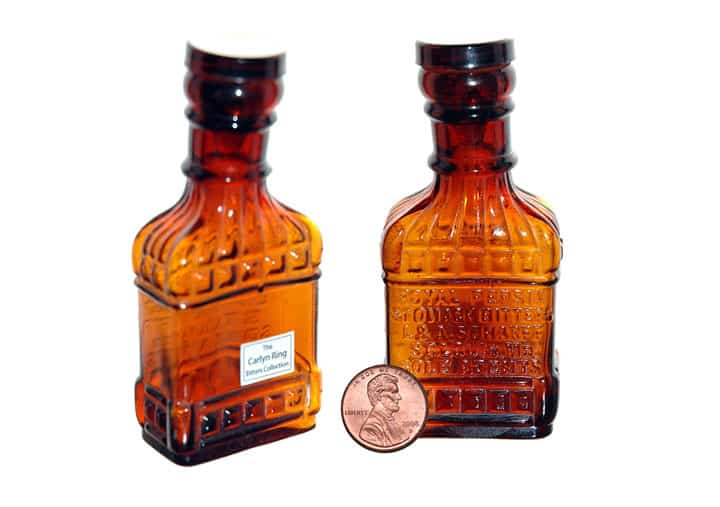 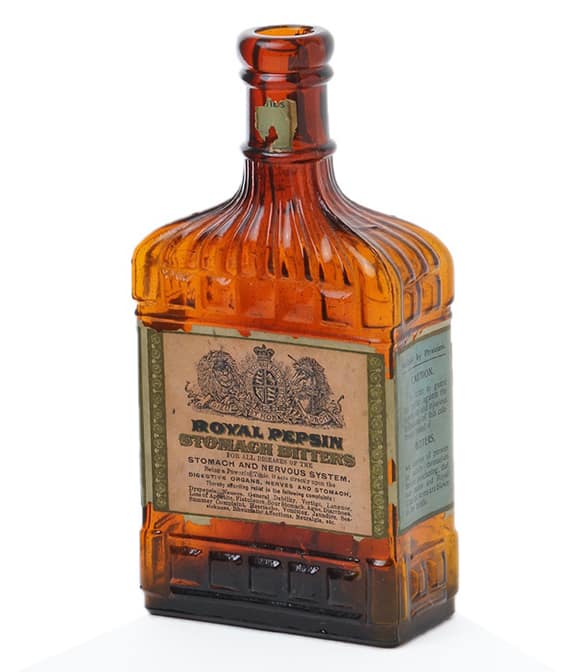 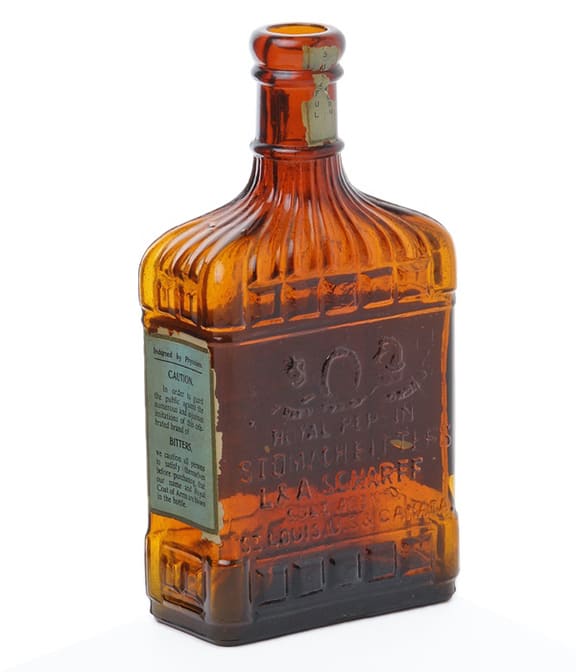 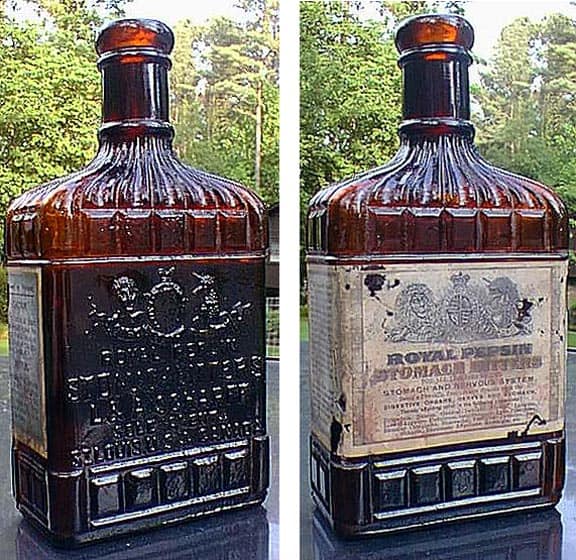 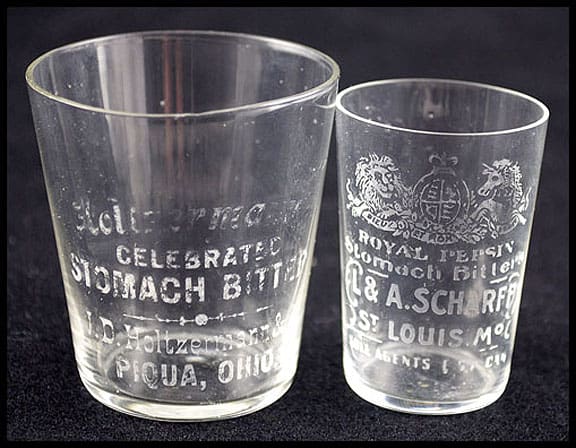 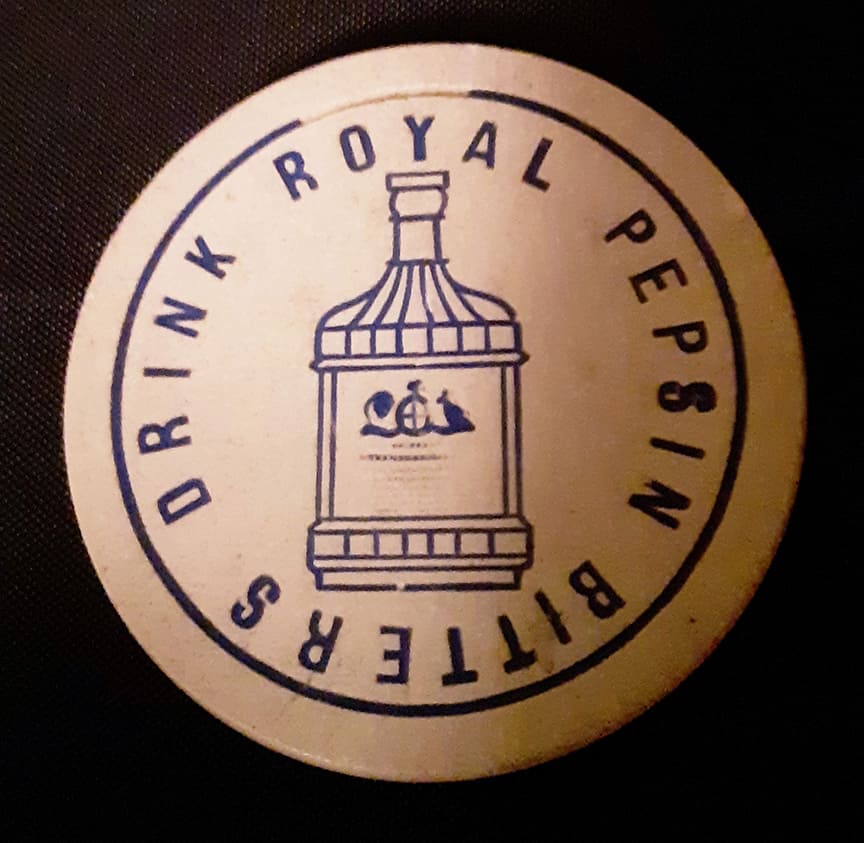 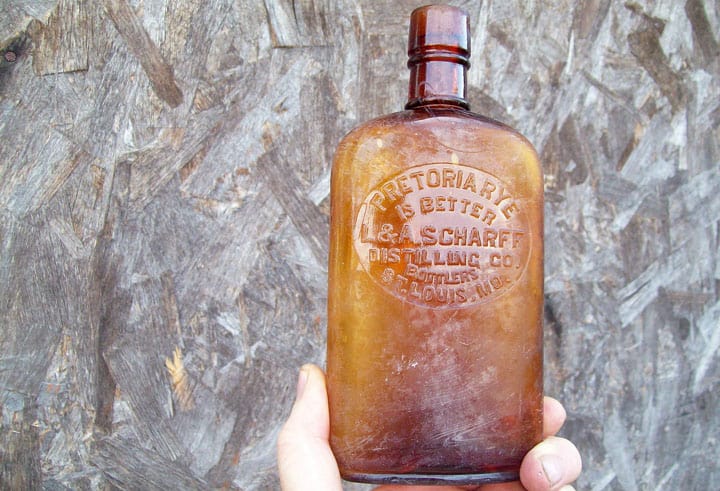 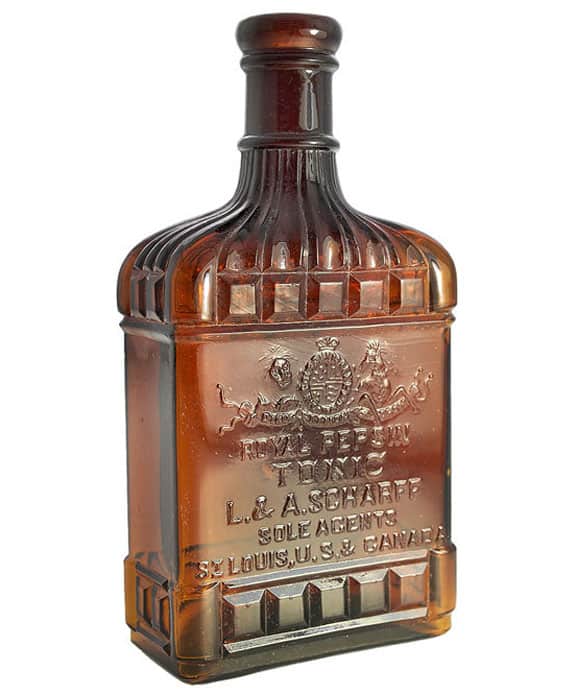 Ferdinand Meyer V is a native of Baltimore, Maryland and has a BFA in Fine Art and Graphic Design from the Kansas City Art Institute and School of Design. Ferdinand is the founding Principal of FMG Design, a nationally recognized design consultation firm. Ferdinand is a passionate collector of American historical glass specializing in bitters bottles, color runs and related classic figural bottles. He is married to Elizabeth Jane Meyer and lives in Houston, Texas with their daughter and three wonderful grandchildren. The Meyers are also very involved in Quarter Horses, antiques and early United States postage stamps. Ferdinand is the past 6-year President of the Federation of Historical Bottle Collectors and is one of the founding members of the FOHBC Virtual Museum.
View all posts by Ferdinand Meyer V →
This entry was posted in Bitters, Druggist & Drugstore, eBay, History, Liquor Merchant, Miniatures, Tonics and tagged Adolph Scharff, bitters, canada, L. & A. Liquors, Lazarus Scharff, miniature, Missouri, Pretoria Rye, Royal Pepsin, St. Louis, Stomach, Tonic. Bookmark the permalink.