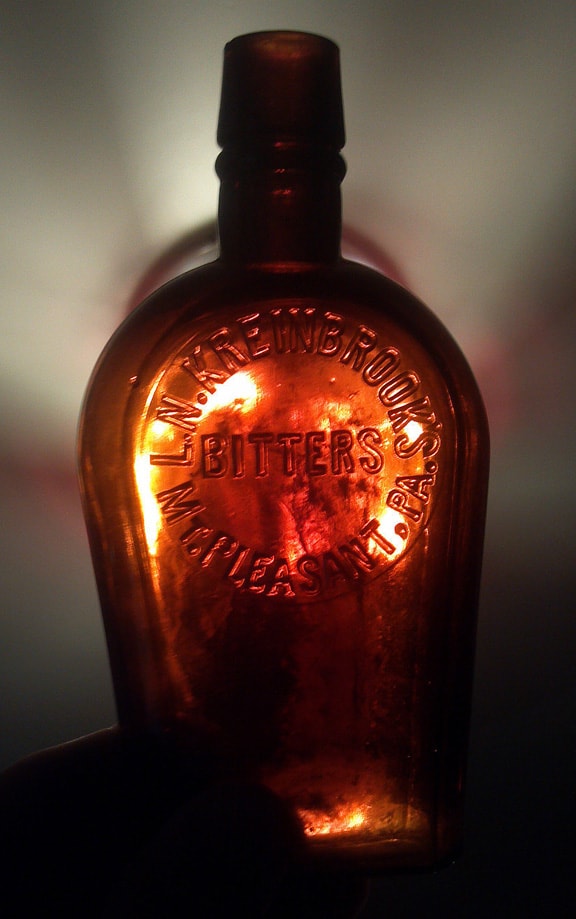 Following up on an ebay tip from my bottle friend, Tom Doligale:

This is an extremely rare 6 and 1/2″ inch tall amber bitters bottle flask from Mt. Pleasant, Pennsylvania. On the front it says L. N. Kreinbrook’s Bitters Mt. Pleasant, Pa. It is in nice condition with no chips or cracks, but it does have inside staining. It has one extremely small spot of roughness on the lip. When I say extremely minute, I mean extremely minute, but I want to be 100% accurate on the description. Take a look at the photos! This is an extremely rare bottle! Sorry about the photos, the glare is from the flash of the camera. [upperaugustapicker] 100% Positive Feedback 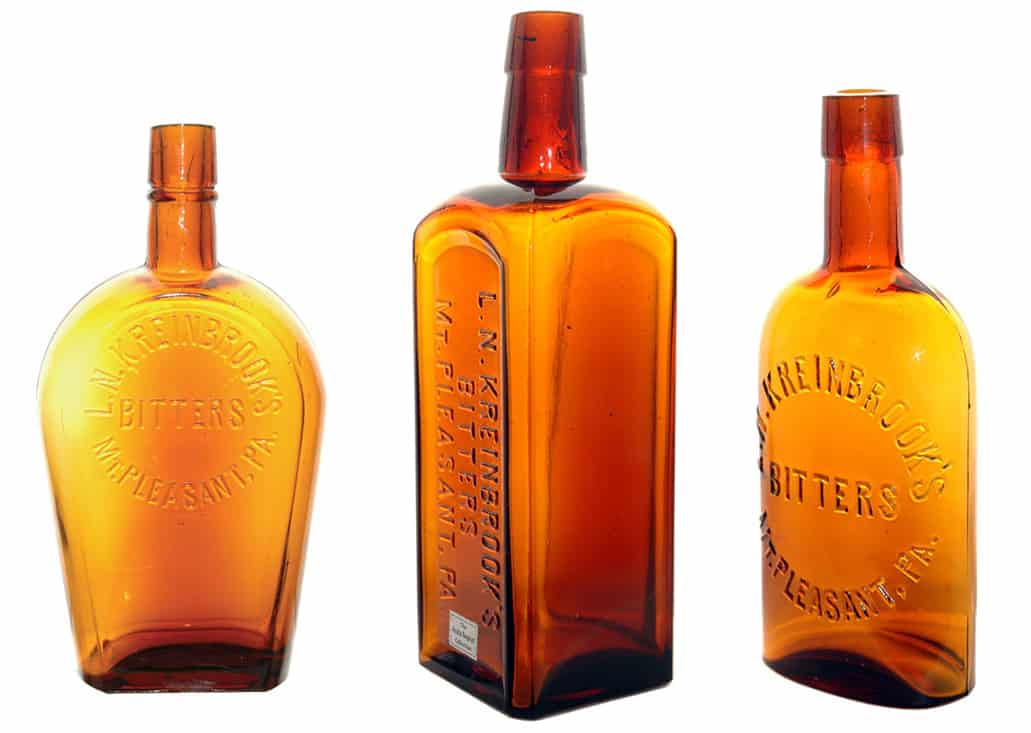 I haven’t thought about my Kreinbrook Bitters bottles (pictured above) in a long time. I actually have three bottles that are each a different mold. That I find strange. I picked up my first, very rare coffin shaped flask (left – K 78.3) in 2003 in Heckler Auction #60. Later I was able to follow up with a very rare oval flask (right – K 78) from American Glass Gallery Auction #2 in 2009 and an extremely rare square (center – K 78.5) in the same auction in 2009. It is interesting to note the similar color and quality of the glass. The square is embossed “McC” on the base which represents William McCully glassworks, Pittsburgh, PA. Probably all three of the bottles were blown at the same location. Not a big leap there.

Obviously, these are not ‘dainty’ medicine bottles full of roots and herbs and marketed for the family. These are hard core liquor bottles in a blue collar steel region of Pennsylvania. Another great example of the diversity of Bitters products and brands in United States during the middle to late 1800s. 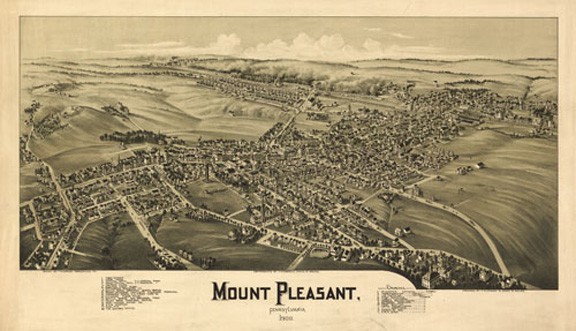 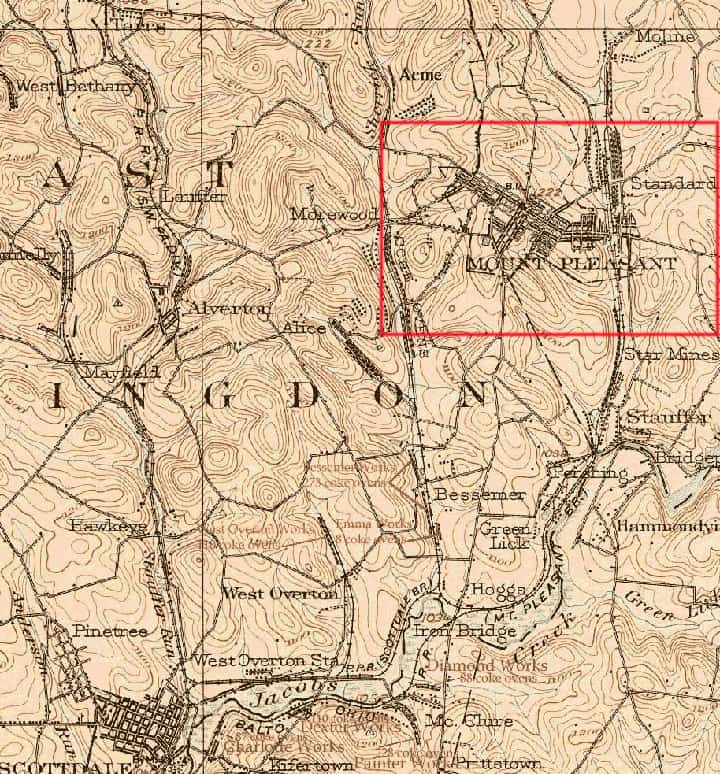 A section of the U.S.G.S. ca.1902 15 min. Connellsville, PA Quad map showing the location of the Morewood Mine & Coke Works, and the coal patch town of Morewood. The town of Morewood does not exist today, strip-mining and the new U.S. Rt.119 has destroyed all but a few houses. The Morewood Mine site and coke works site has been reclaimed and very few remains can be seen. – Museum of Coal Mining (Map courtesy of the U.S. Geological Survey, Washington, D.C.)

In the past, Mount Pleasant was a center of an extensive coke-making industry. Other products included flour, lumber, iron, glass, foundry products, etc. 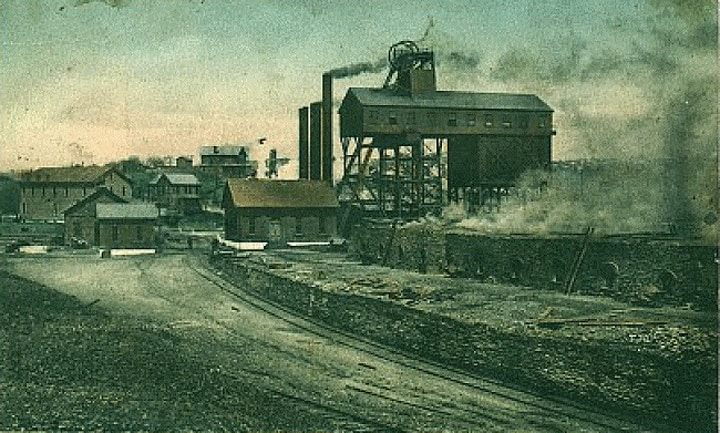 Glass manufacturing was also a foundation of the local economy, with Bryce Brothers commencing operations in 1850

Glass manufacturing was also a foundation of the local economy, with Bryce Brothers commencing operations in 1850, and L. E. Smith Glass in 1907. The invention of the Bessemer process of steelmaking in 1859, which required coke (fuel), had a dramatic impact on the region. The town prospered as coal deposits were developed, from which coke was made. However, the lives of coal miners in the outlying “patch towns” (company-owned mining towns) were arduous, and labor-management disputes became frequent. The strike in Morewood, west of Mount Pleasant borough, was the most violent of the area’s strikes, in which nine miners were killed by sheriff’s deputies on April 3, 1891.

The is scarce information specifically on the business of L. N. Kreinbrook. Lewis N. Kreinbrook was born on 08 March 1853 somewhere in Pennsylvania. He died in 1935 (Obituary below). His father was Herman K. Kreinbrook (1829 – 1903) from Hanover, Germany. His mother was named Elizabeth. His wife was named Nancy. Apparently Lewis, in his early life was a master coke maker. He then ran the Mt. Pleasant Distilling Company for two years and was a clerk in a grocery store and drug store and also ran his own store in Pennsylvania. In later life he was a gentleman farmer in Shelby, Ohio. Lewis and Nancy had three children; Elizabeth, William and Emma May (pictured below). 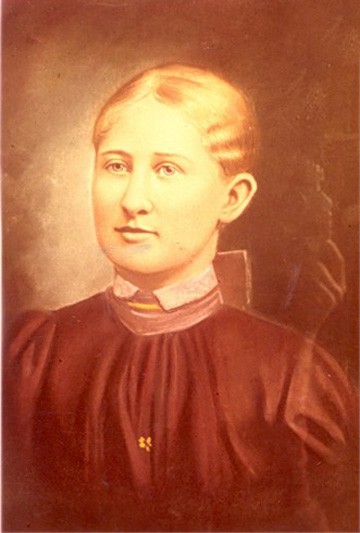 “Emma’s father made a fortune in Kreinbrook Bitters”

Phrase from zentmeyergenealogy and picture from ancestry.com

Lives 4-1/2 miles from Shelby near Hazelbrush school house on R.R.#3. He was born in Somerset County Pennsylvania. His father H. W. and his mother Hetty are both dead. There were 17 children in the family, 10 living, all but L. N. Kreinbrook live in Pennsyslvanina. H.W. his father, came to America from Germany.

For 13 years L. N. Kreinbrook was a master coke maker, he ran a distillery for 2 years and was a clerk in a grocery store and drug store and also ran his own store in Pennsylvania.

For 8 years he has been farming here. He has been married twice, first in 1875 and again in 1891. Of the two unions he has had 6 children, two are dead. George W. Kuhn: was born in Plymouth Township and has ever since made his home within hailing distance of Shelby. About 1 -1/2 miles east of town he has one of the best farms.

In 1874 he attended Heidelberg College and remained there for 3 years, returning home at the time of his fathers death.

In 1881 he married ELIZABETH BRICKER. They have 3 sons (not correct). For many years he was President of the Farmers Institute. He is a stockholder in the Citizens Bank and a member of the K of P lodge. For 12 years he has been a Republican Committee member and for 18 years been on the School Board. He was a Truant Office and a member of the Reformed Church. The Richland County – Shelby Chapter of the Ohio Genealogical Society 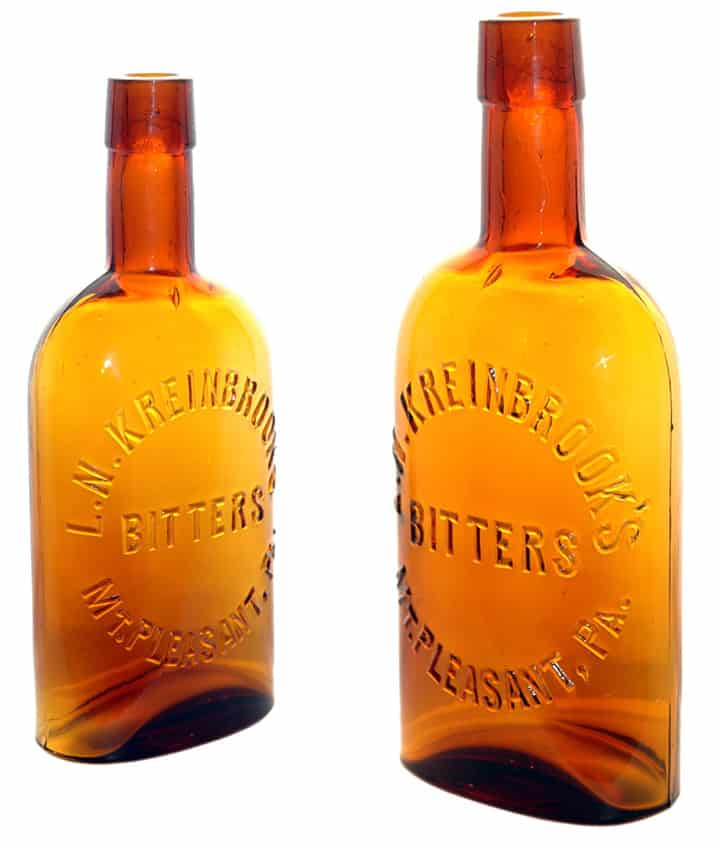 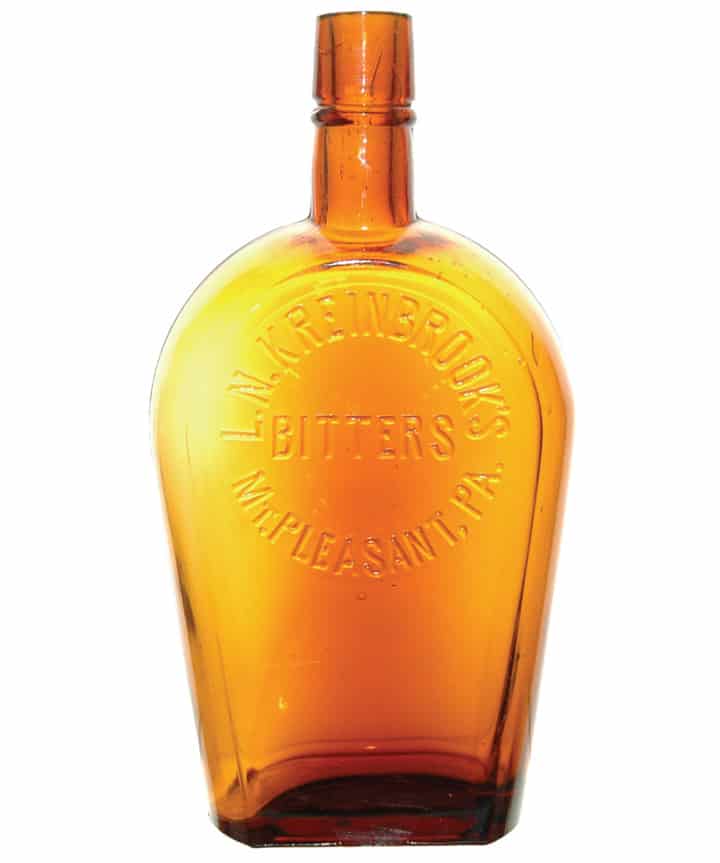 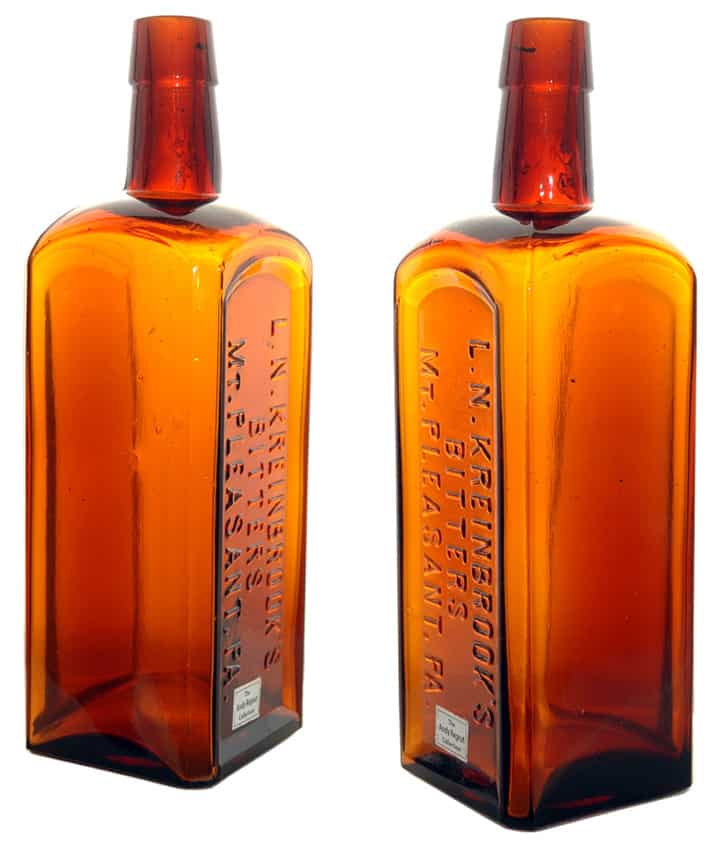 Ferdinand Meyer V is a native of Baltimore, Maryland and has a BFA in Fine Art and Graphic Design from the Kansas City Art Institute and School of Design. Ferdinand is the founding Principal of FMG Design, a nationally recognized design consultation firm. Ferdinand is a passionate collector of American historical glass specializing in bitters bottles, color runs and related classic figural bottles. He is married to Elizabeth Jane Meyer and lives in Houston, Texas with their daughter and three wonderful grandchildren. The Meyers are also very involved in Quarter Horses, antiques and early United States postage stamps. Ferdinand is the past 6-year President of the Federation of Historical Bottle Collectors and is one of the founding members of the FOHBC Virtual Museum.
View all posts by Ferdinand Meyer V →
This entry was posted in Bitters, eBay, Flasks, Glass Companies & Works, History, Liquor Merchant and tagged bitters, Emma May Kreinbrook, flask. coke, Kreinbrook. L.N. Kreinbrook. Lewis N. Kreinbrook, mining, Morewood Mine, Mt Pleasant, Pennsylvania, Pittsburgh, steel, Tom Doligale, Westmoreland, William McCully Glassworks. Bookmark the permalink.