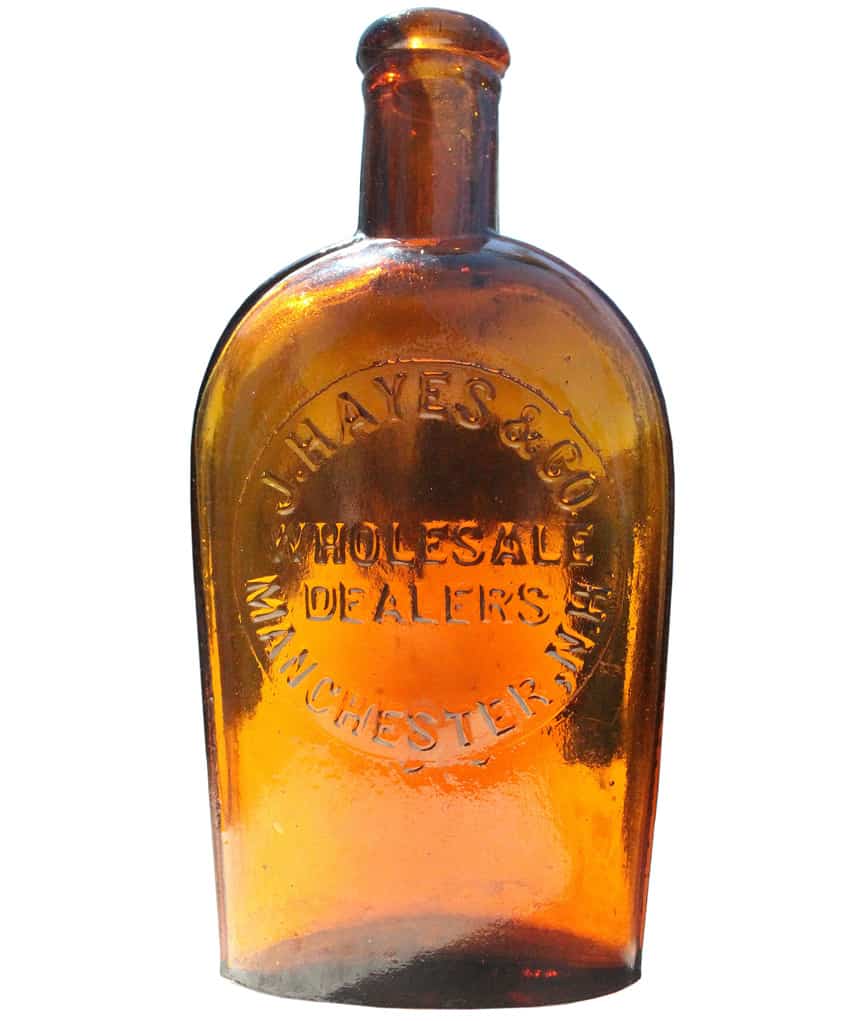 Pam Selenak sent me an email link from ebay for a neat little J. HAYES & CO. | WHOLESALE DEALERS | MANCHESTER, NH flask. Pam is the FOHBC Public Relations Director, and of course she is referencing our 2013 FOHBC National Antique Bottle Show this coming July in Manchester. 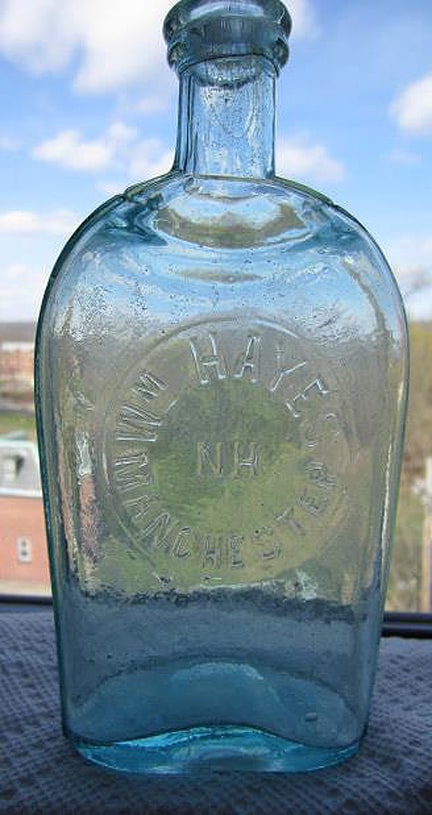 Dana Charlton-Zarro followed up pretty quickly, after I posted the above picture on facebook, with another aqua example of a WM HAYES | MANCHESTER NH. Slightly different embossing. Now we have a William and not a “J” Hayes? I also see that Jeff and Holly Noordsy have sold an excellent example sometime in the past (see below). Jeff even adds “probably blown at the Lyndeboro Glass Works, Lyndeboro, NH”. Now we see the “J” stands for “John”. 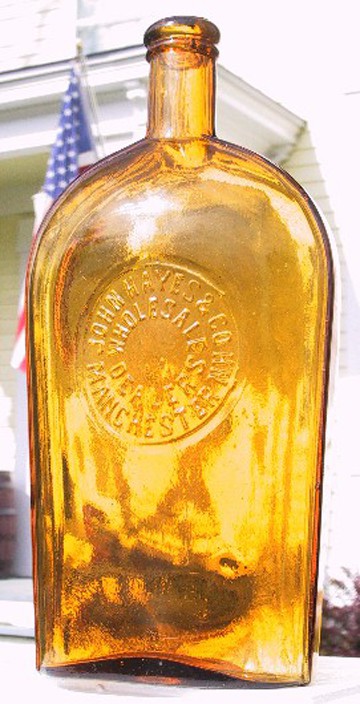 I have always been intrigued by these little pocket flasks. I also really like the embossed circle and concentric graphics that you often see within the circle. Let’s see if we can find out about Mr. Hayes. At least I might be able to say I know something about a Manchester flask if anyone asks this coming July. 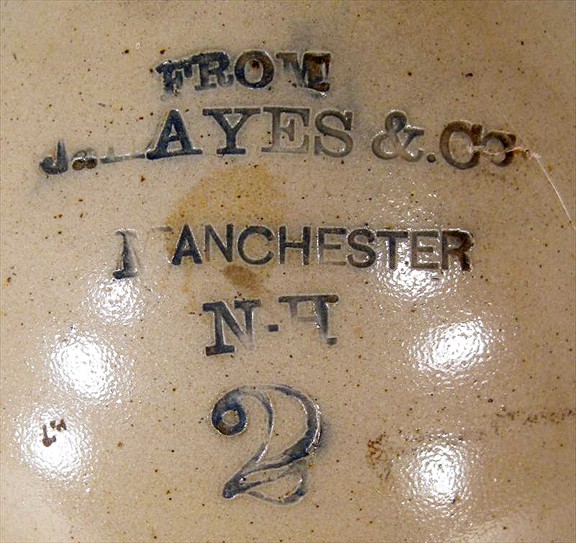 A quick Google search pulls up quite a few stoneware pieces with the HAYES name inscribed in the piece. 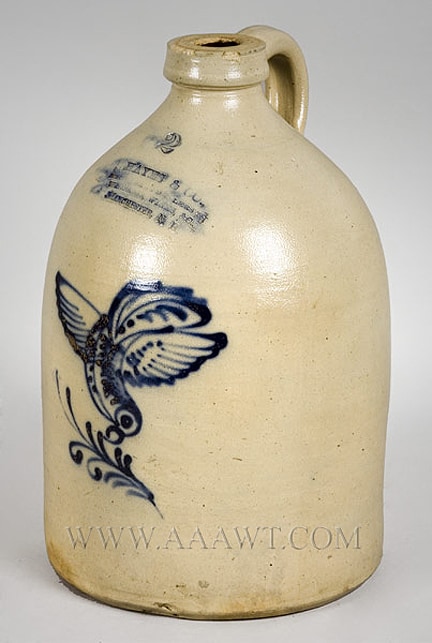 The Hayes name is a bit challenging meaning I can not confirm the family lineage with much support material. I do suspect there is a parent Jeremiah Joseph Hayes and the sons are John J. (born in London and died in Manchester) and William. This would correspond with the bottle embossing and the advertisement dates posted. 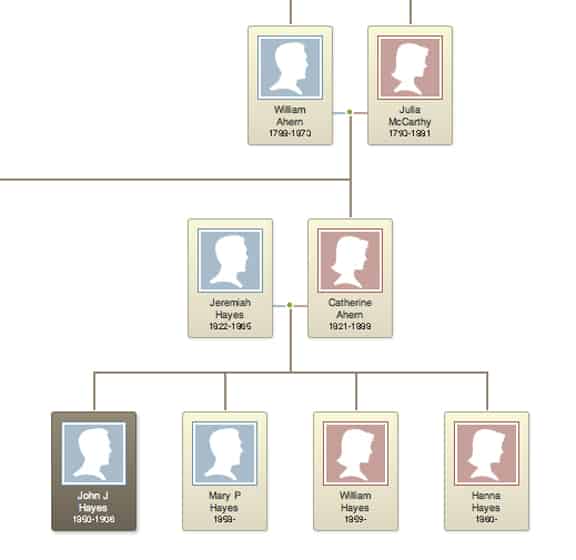 Posted below you will see some Hayes & Company, Manchester, New Hampshire advertising that I was able to locate.

We invariably hold the largest stock of Pure Liquors in the state.

Hayes & Co. advertisement in Manchester by JOHN B. CLARKE – 1875 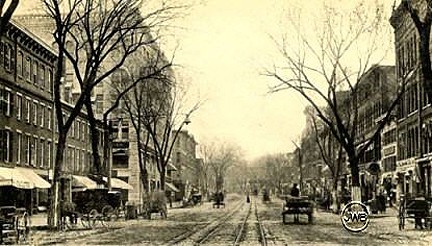 Just some cool imagery to help frame my vision and give me some background on Manchester. Manchester is the largest city in the U.S. state of New Hampshire, the tenth largest city in New England, and the largest city in northern New England, an area comprising the states of Maine, New Hampshire, and Vermont. It is in Hillsborough County along the banks of the Merrimack River, which divides the city into eastern and western sections. Manchester is near the northern end of the Northeast megalopolis. As of the 2010 census, the city had a population of 109,565, the most of any city in northern New England. [Wikipedia] 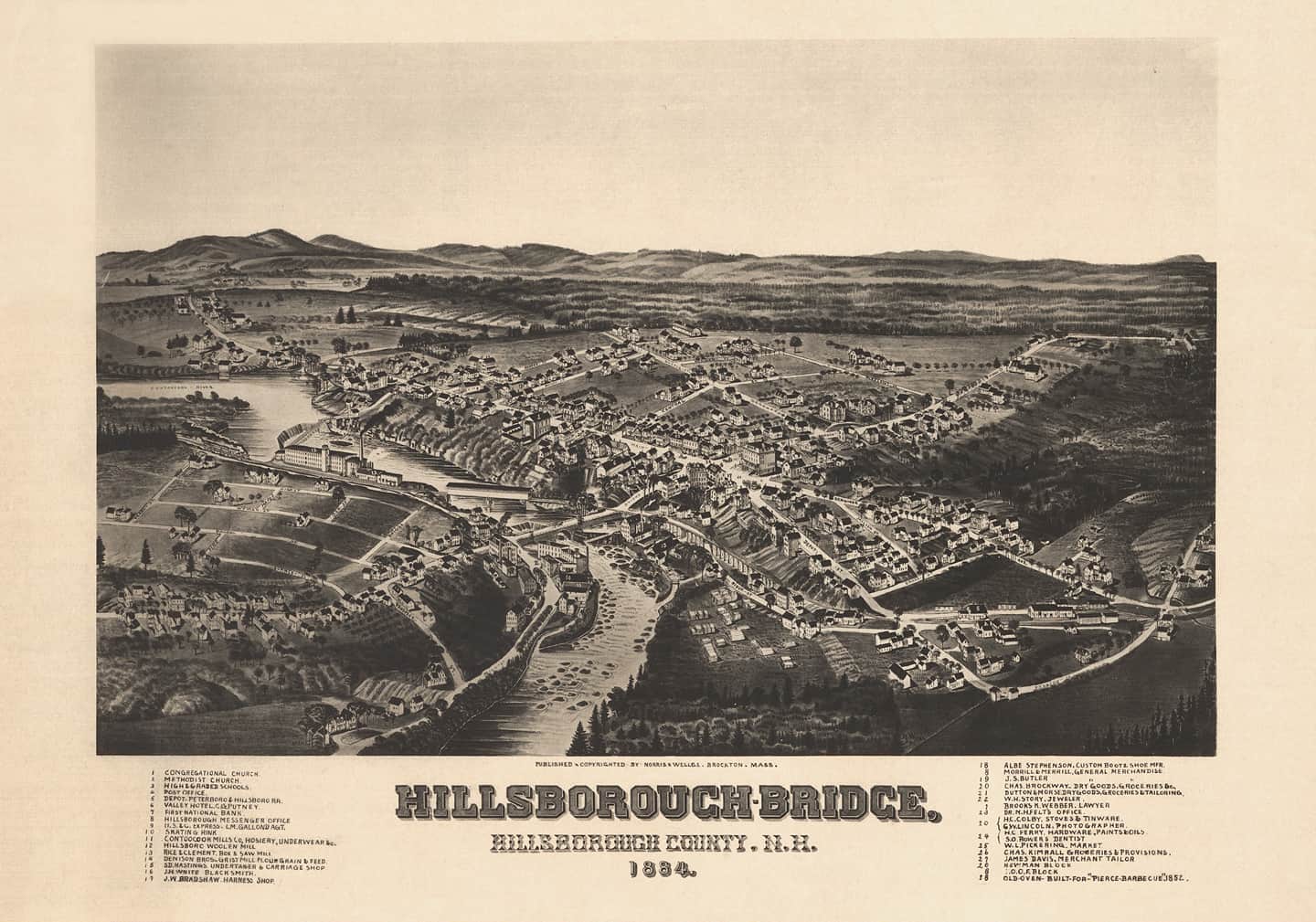 Early ‘birds eye view’ map of Manchester. It is dated 1884 which is way to late in my estimation. Looks more like the early 1800s. With cross referencing other maps, I was able to locate Concord Street. 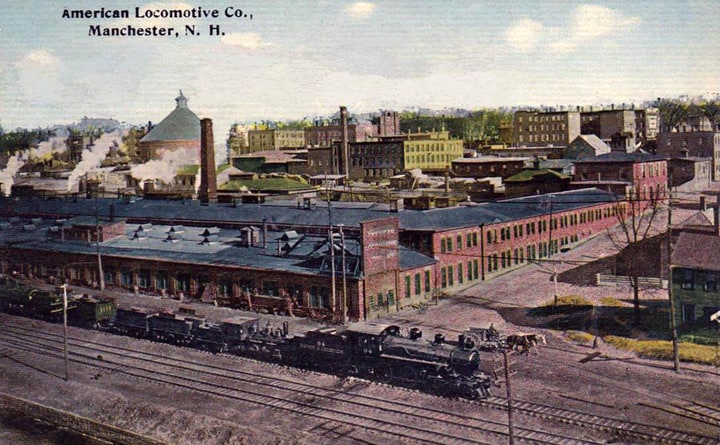 Postcard photo of the American Locomotive Works (ALCO) factory in Manchester, New Hampshire. This factory was formerly known as the Manchester Locomotive Works before it was bought by ALCO in 1900. A Bangor and Aroostook locomotive is seen on the tracks at the factory. – Postmarked 1912

Ferdinand Meyer V is a native of Baltimore, Maryland and has a BFA in Fine Art and Graphic Design from the Kansas City Art Institute and School of Design. Ferdinand is the founding Principal of FMG Design, a nationally recognized design consultation firm. Ferdinand is a passionate collector of American historical glass specializing in bitters bottles, color runs and related classic figural bottles. He is married to Elizabeth Jane Meyer and lives in Houston, Texas with their daughter and three wonderful grandchildren. The Meyers are also very involved in Quarter Horses, antiques and early United States postage stamps. Ferdinand is the past 6-year President of the Federation of Historical Bottle Collectors and is one of the founding members of the FOHBC Virtual Museum.
View all posts by Ferdinand Meyer V →
This entry was posted in Advertising, Flasks, FOHBC News, Glass Companies & Works, History, Liquor Merchant, Questions and tagged fohbc, Hayes & Company, J. Hayes & Co., Jeff Noordsy, Jeremiah Joseph Hayes, John Hayes, Lyndeboro, Lyndeboro Glass Works, Manchester, New Hampshire, William Hayes, Wm. Hayes & Co.. Bookmark the permalink.