Arabian Bitters – One Thousand and One Nights

Did you know that there is an Arabian Bitters from Savannah? 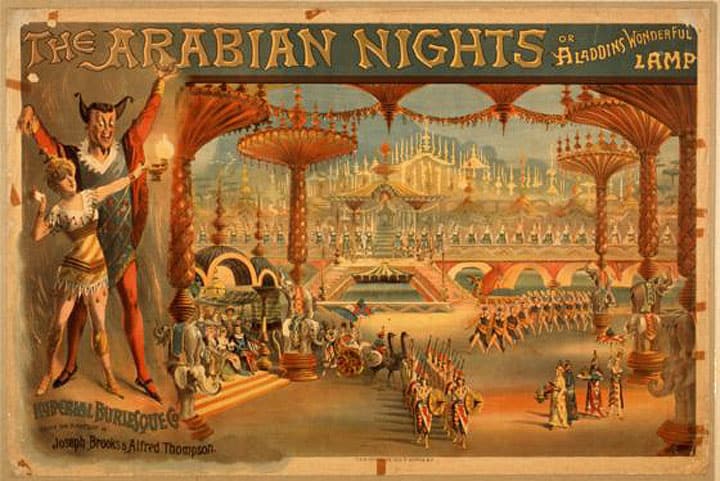 I wonder what the product name was inspired from? Arabian Nights? 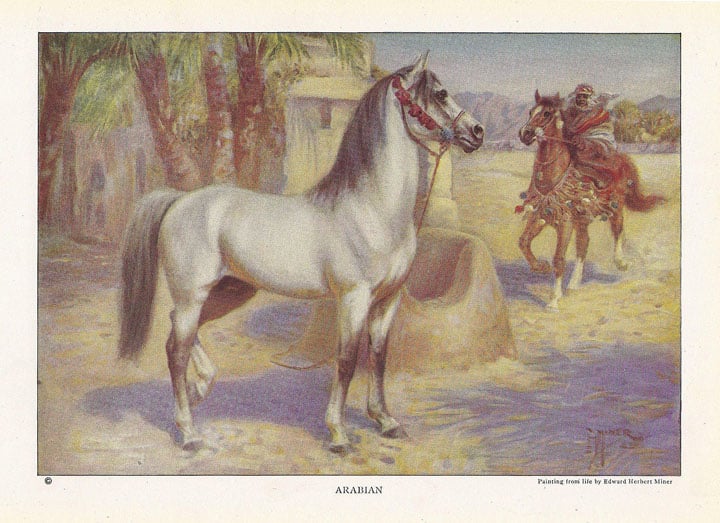 Or maybe from a horse or some mystical place? 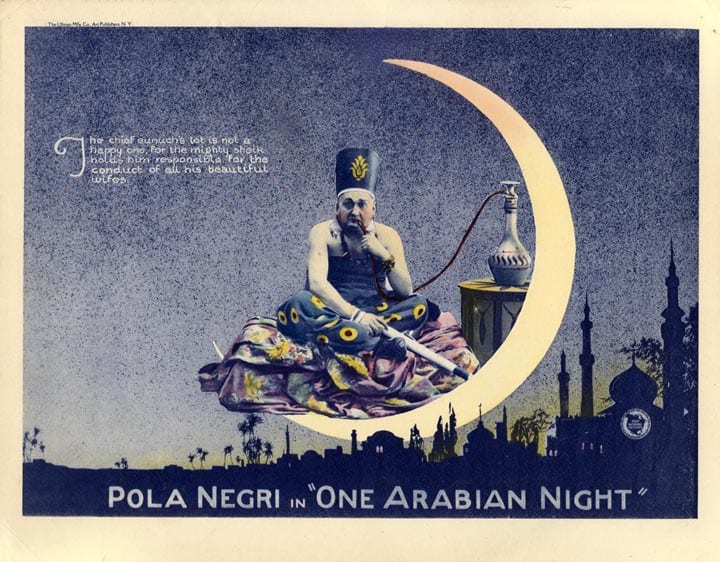 Maybe from a dance or Aladdin’s Lamp? 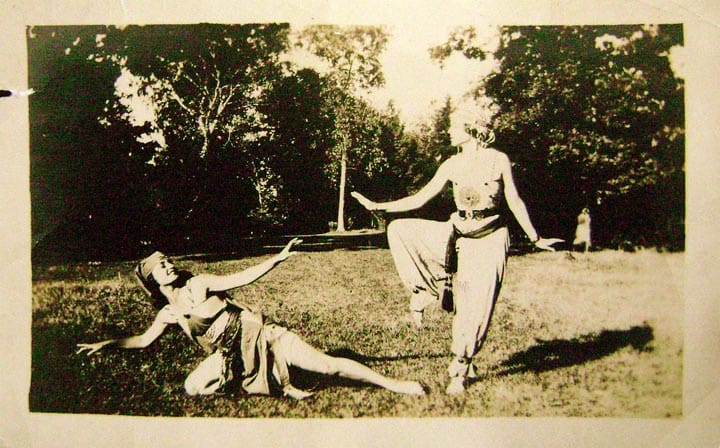 Let’s see if we can find out?

Arabian Bitters – One Thousand and One Nights

I was first reminded of the elusive and mystical Arabian Bitters when I started the Houston series of posts (Read Part IIA) and found an interesting little advertisement (pictured below) for 25 Boxes of Arabian Bitters that was being advertised by Fernandez, Alvarez & Co. in the Houston Weekly Telegraph in 1860. They had just received the bitters that were “superior to any other Bitters.” So, who sent these 25 boxes of Arabian Bitters? 1860 is fairly early for a bitters in this part of the country.

Example was found in 1937 in Fort Pulaski, now at the Museum in Savannah, Beach.

What caught my attention was the product name. They must be talking about the Arabian Bitters from Savannah, Georgia right? That bottle is pictured below. The Carlyn Ring and Bill Ham listing in Bitters Bottle Supplement is: 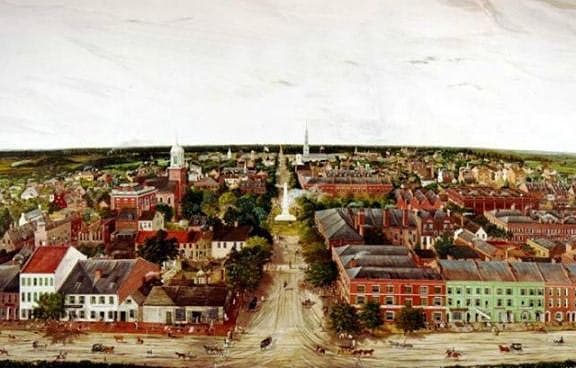 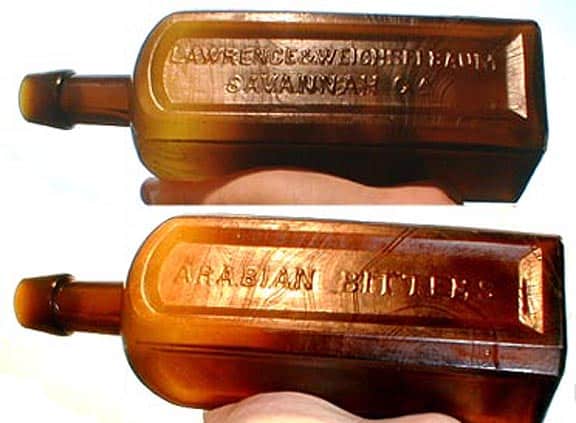 What can you tell me about this bitters bottle? It is embossed ARABIAN BITTERS on one panel and LAWRENCE & WEICHSELBAUM / SAVANNAH, GA on the opposite panel. It has a smooth base. It is one of the first bottles I ever recovered. I have never seen one for sale. Any info is appreciated. I found this bottle (actually, two of them) on private property not too many miles from the mouth of the Suwannee River. They may have been from an early logging camp, or they may have been tossed onto the bank from a steamboat tied up for the night. Harry

Question on Antique-Bottles.net in 2004 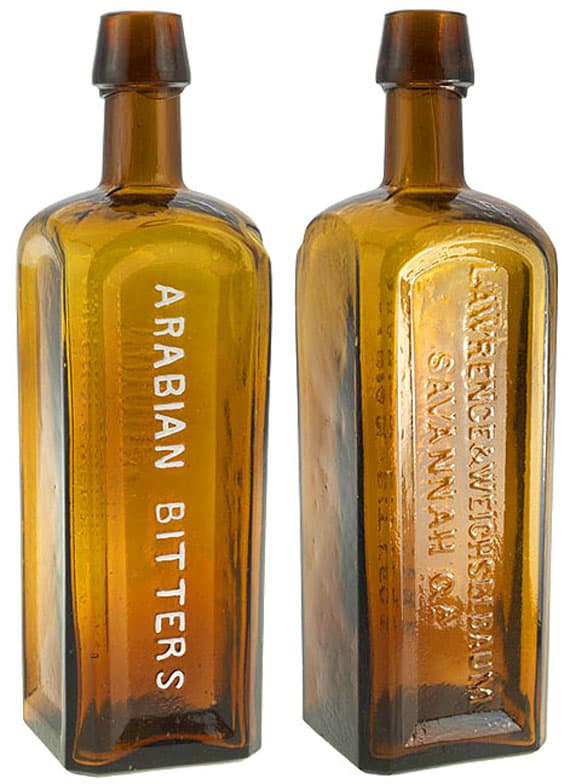 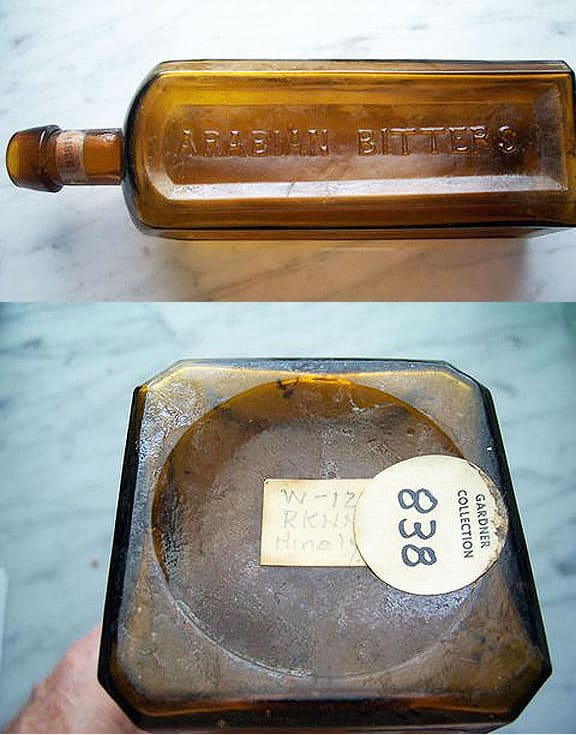 In 1871, Joseph S. Lawrence was the proprietor of J.S. Lawrence & Co., family groceries, located at 198 Broughton, in Savannah, Georgia. He was also listed as a salesman with Lippman & Bro. who put out Lippman’s Great German Bitters. I have a really nice yellow example myself. Jacob Weeks Weichselbaum was born about 1848 in Philadelphia, Pennsylvania and graduated from the Philadelphia College of Pharmacy in 1867. He first clerked in 1871 with Lippman & Brother where he presumably knew Joseph S. Lawrence.  Jacob and Lewis Lippman had previously opened offices at 71 New Street in New York, in 1871 and closed the same year. They also operated out of Savanah and remained in business until 1875.

Lawrence & Weichselbaum are the names embossed on the Arabian Bitters bottle from Savannah. They were located on Market Square. It looks like they were partners only in 1874 and 1875 which would be the date for the bitters. They had plenty of legal problems relating to unpaid debts so this probably led to their downfall. Lawrence moved on to other endeavors where Weichselbaum would work as a druggist and physician. Weichselbaum would eventually get a higher degree from the Savannah Medical College in 1880 and practiced medicine for many decades. He died in October 1926 at St. Joseph’s Hospital in Savannah, Georgia. 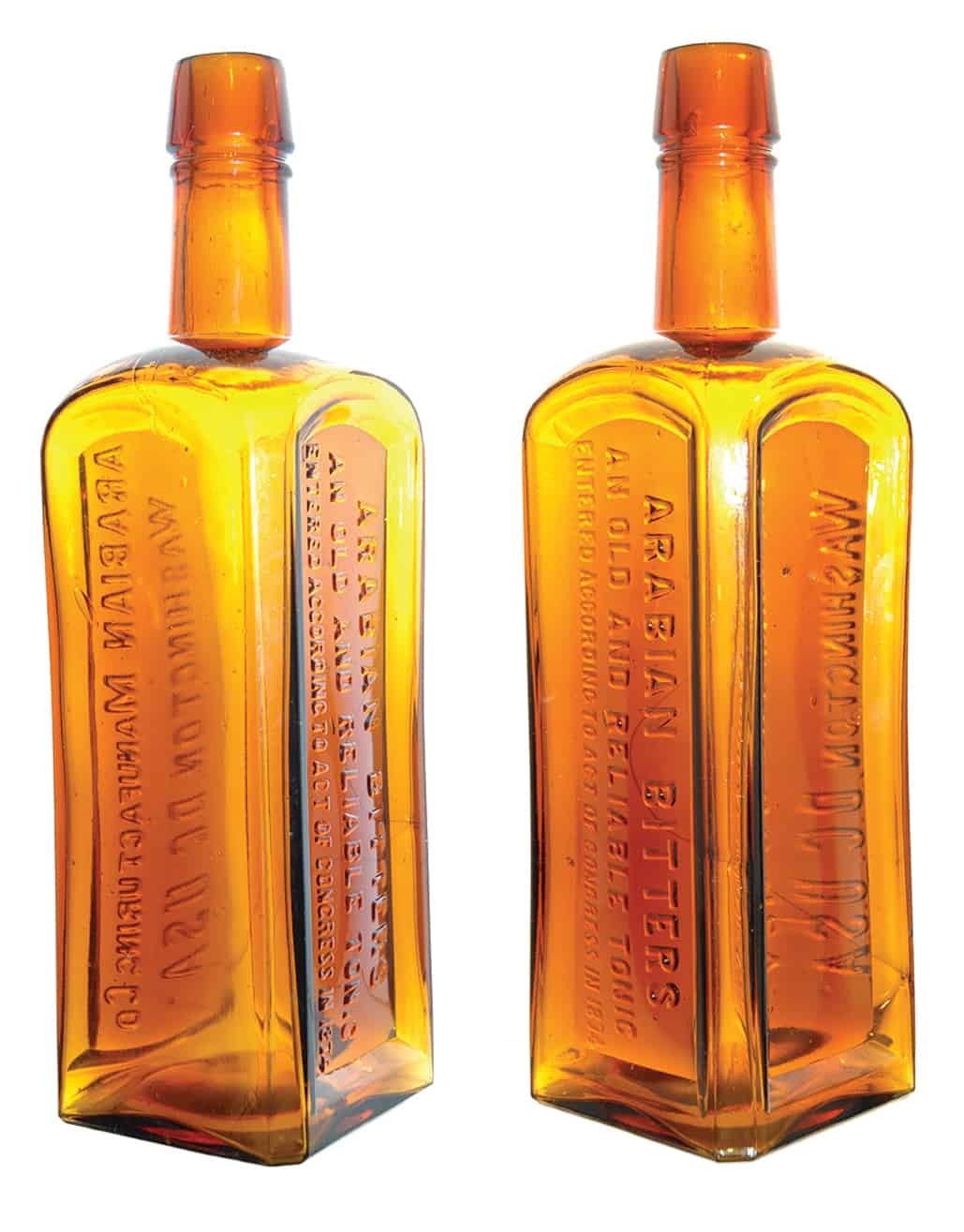 I can not find any other advertising related to the 1860 Houston example. I can only surmise that the name ‘Arabian’ was used for its mystical and middle eastern reference, such as in the material at the top of this post. Maybe this is a reference to One Thousand and One Nights which is a collection of West and South Asian stories and folk tales compiled in Arabic during the Islamic Golden Age. It is often known in English as the Arabian Nights, from the first English language edition (1706), which rendered the title as The Arabian Nights’ Entertainment. The next advertisement below uses some of this exotic wording. Read: How the Arabian Nights Inspired the American Dream, 1790-1935

In 1865, I see some advertising (below) in the Charleston Daily News that I missed before for The Genuine Arabian Bitters or Salah-Adin being sold by Von Holten, Tamsen & Company located at No. 190 King Street in Charleston, South Carolina. They said it was “The Greatest Discovery of Medical Science” and noted that they were selling it in the city both retail and wholesale. Again too late for the 1860 Houston advertisement. 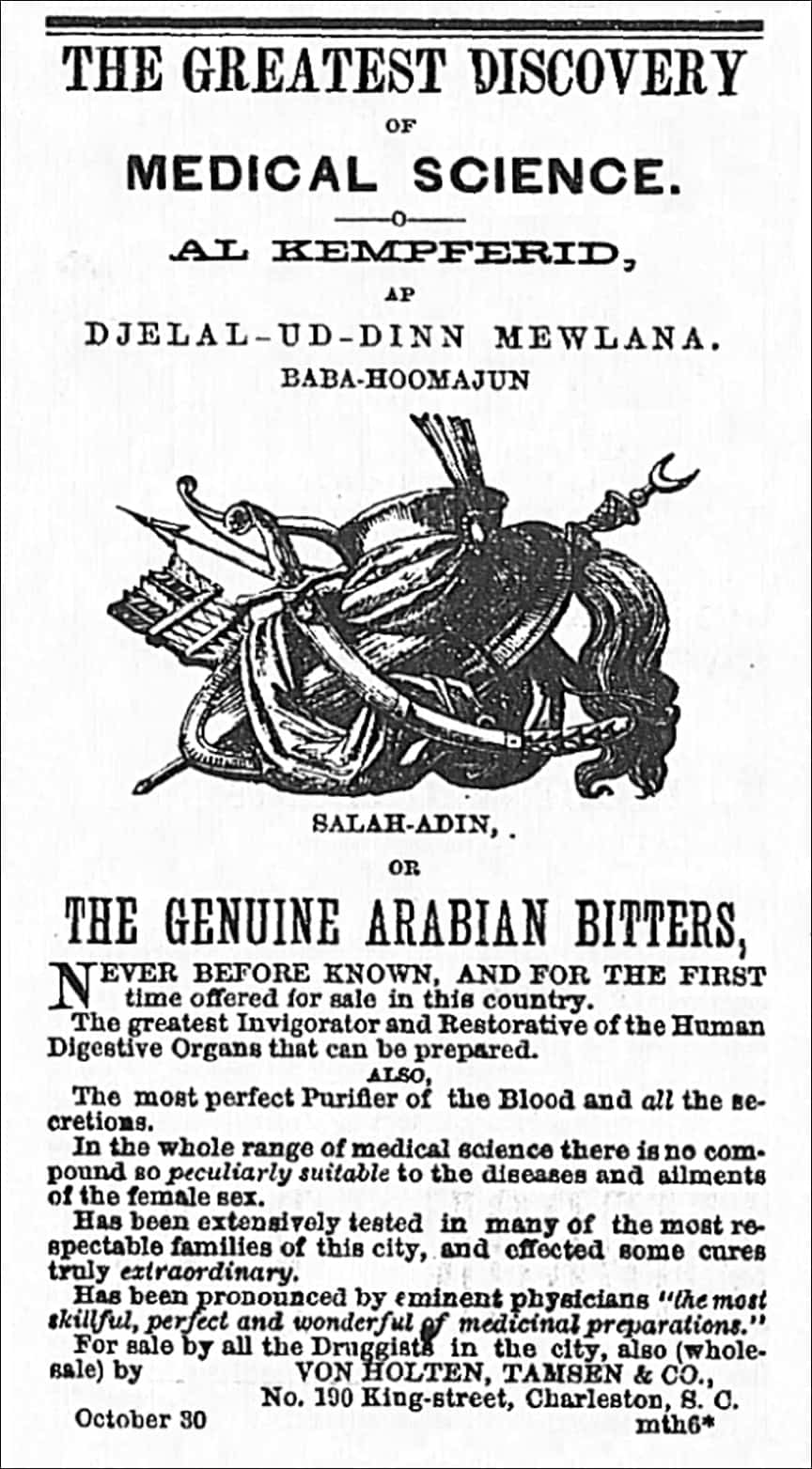 I also found the newspaper advertisement below for an Arabian Bitters being sold at Depot, 65 Decatur Street in New Orleans in 1877. Maybe this was the Savannah or Charleston brand. Hard to tell. Maybe it was their own brand though no proprietor is listed. 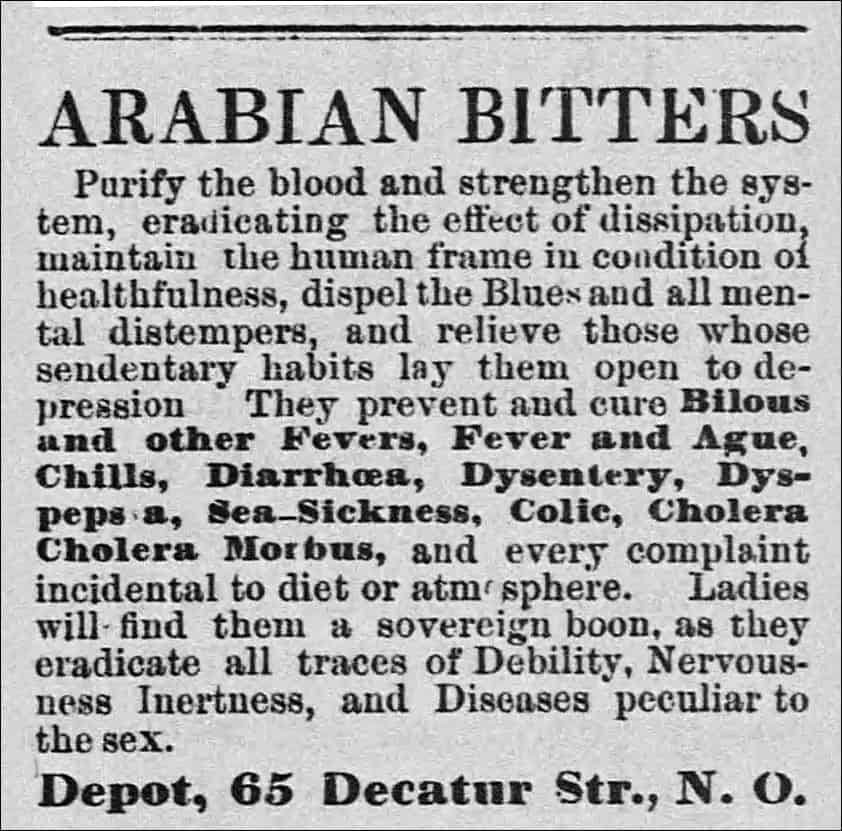 Here is another amusing ad from new Orleans in 1873. Amusing because they think “Bitters de Arabes” is Oriental. Editor probably had an office in the French Quarters. It could be the same bitters as the one noted in the advertising above, or is it a clue to yet another Arabian Bitters? 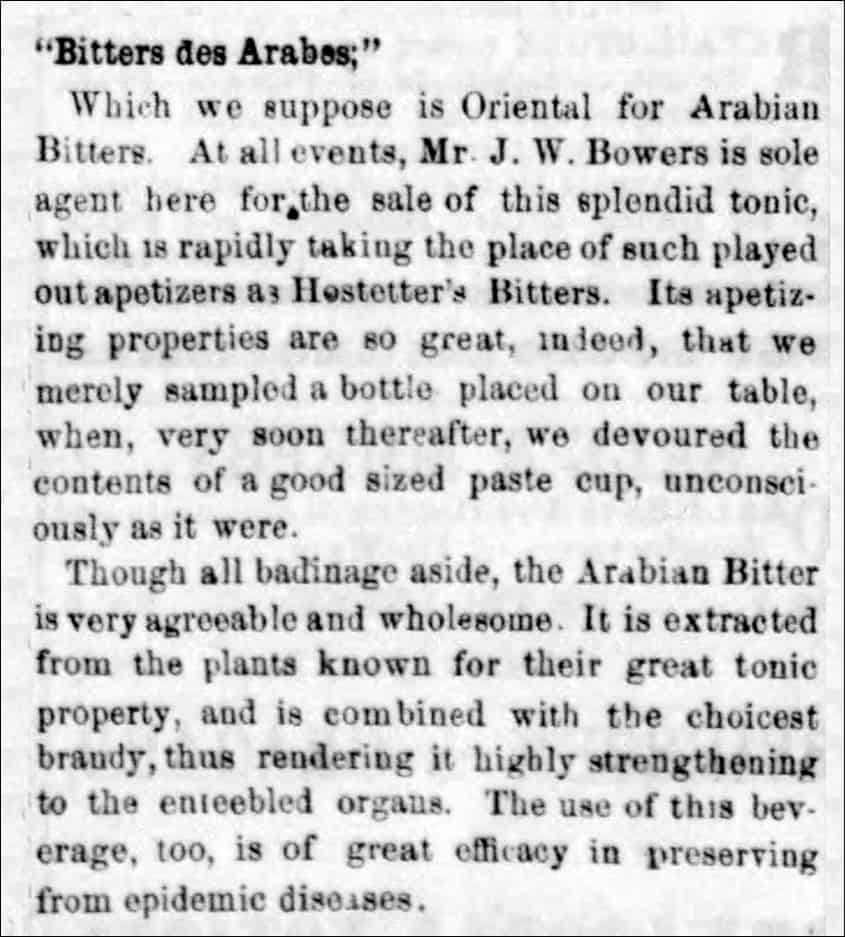 So again, who was making this Arabian Bitters being sold in Houston in 1860? I seem to be no further along in solving the problem. Case is still open.

1860: Newspaper advertisement (below) Just received in Houston, 25 Boxes of Arabian Bitters that was being advertised by Fernandez, Alvarez & Co. in the Houston Weekly Telegraph in 1860.

1871: Directory Listing (below): Jacob Weichselbaum practiced in Savannah, Georgia and clerked in 1871 with the Lippman & Brother who put out Lippman’s Great German Bitters. – Savannah City Directory, 1871 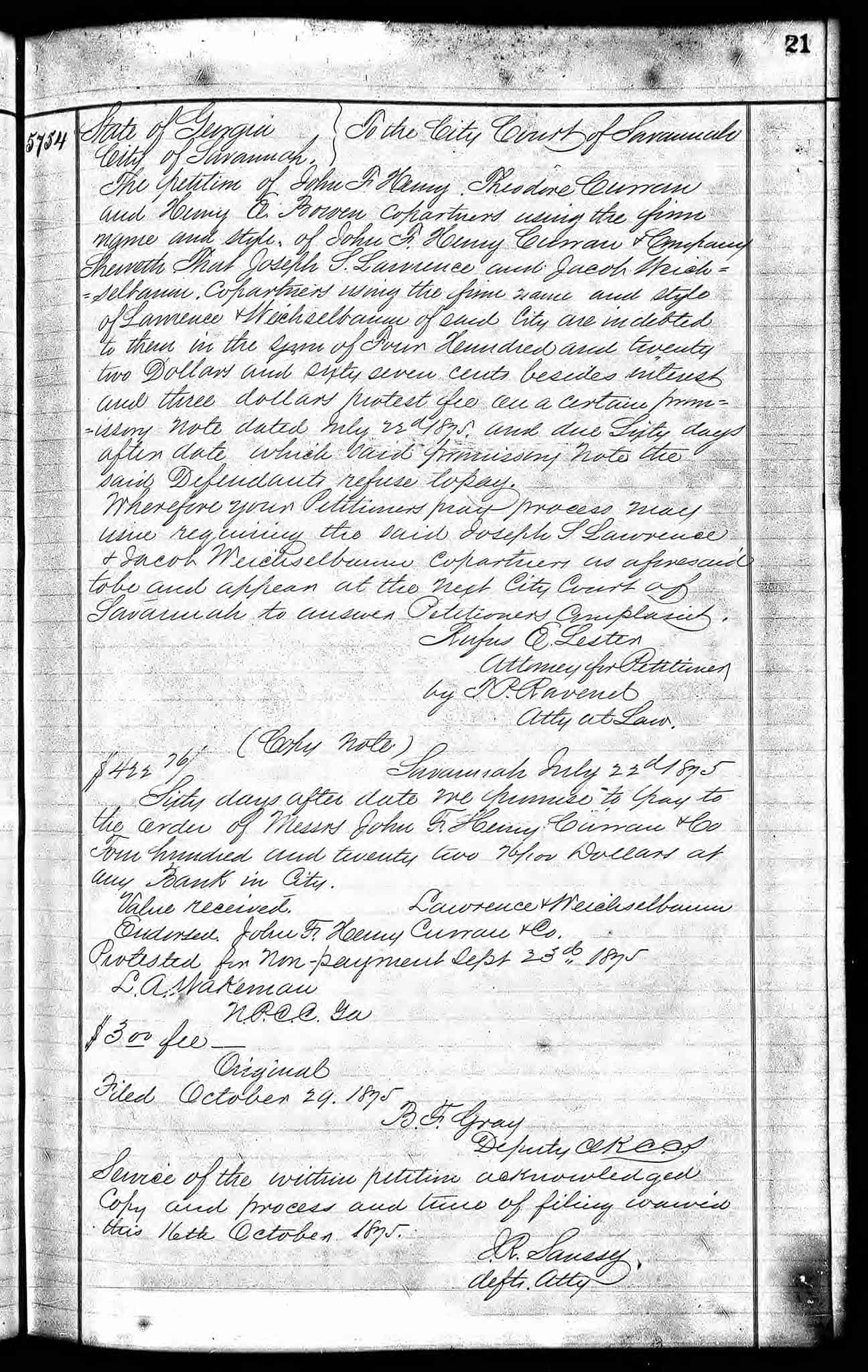 1 Response to Arabian Bitters – One Thousand and One Nights