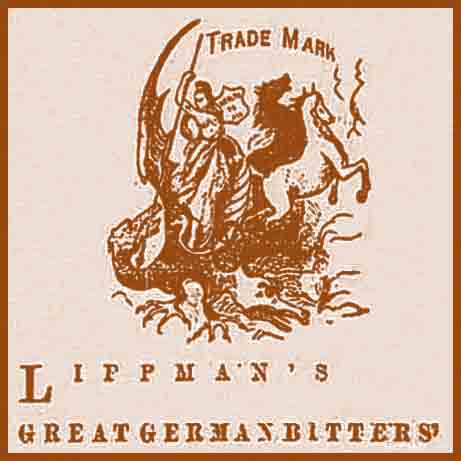 The Standard Bitters of Germany 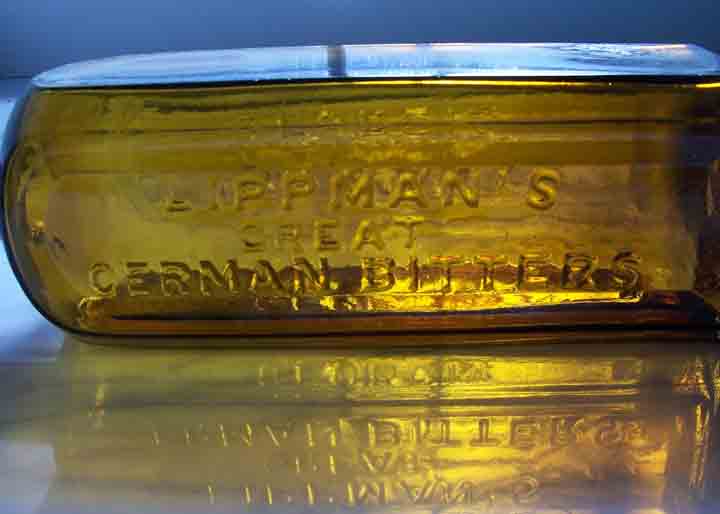 A great square bitters closed Monday on ebay (see top picture and further below) and it also sold for a song. Fortunately, I already have a gorgeous example of the Lippman’s Great German Bitters from Savannah, Georgia so I laid low and watched. Congratulations to the buyer. The ebay listing read:

“Lippman’s Great German Bitters – Savannah, Georgia” a good shade of golden amber in Mint Condition…except for a small scratch on the plain panel which can be seen in image 9. 10 x 2 3/4″ Square. The Lippman Brothers opened offices in New York in 1871 and closed the same year. They remained in business in Savannah only until 1872. tecumseh43 (100%) 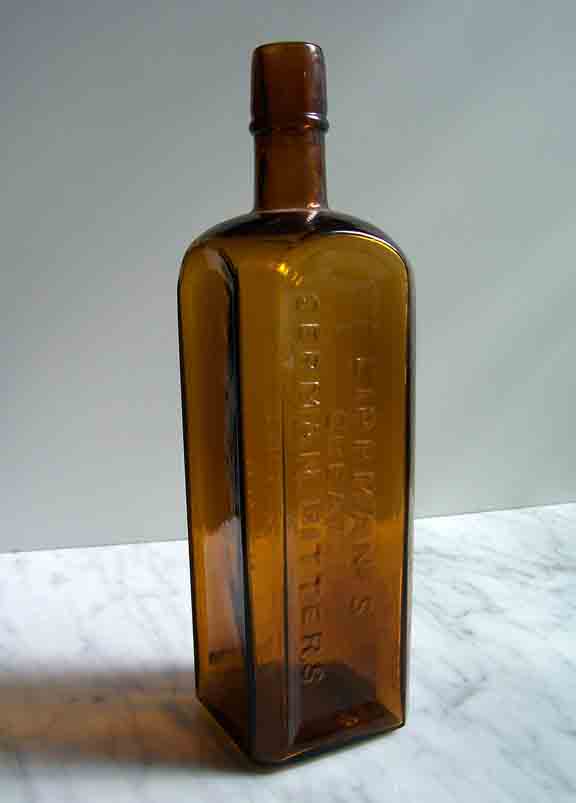 Jacob Lippman was the second son of Joseph (1808-1876) and Barbette Lippman who were from Reichmansderf, Bavaria which of course is Germany. Joseph and Barbette arrived in Philadelphia in 1838 and shortly thereafter, Jacob was born in 1843. He was preceded by two years by his brother Louis. Another brother Lawrence, was born in 1846 in Savannah, Georgia. Jacob and his brothers constituted Jacob Lippman Wholesale Drug House, Lippman & Bro. and eventually Lippman Brothers at various points in time. Something brought the family to Chatham, Georgia in 1846 or so as Joseph, the father, established himself as a dry goods merchant and druggist according to an 1850 United States Federal Census and other sources. Chatham is the county for Savannah.

Jacob attended Rennselaer Polytechnic Institute in New York from 1858 to 1861 and dips out of sight during the Civil War years. We next see that Lippman & Bros., Drygoods, and Jacob Lippman, Druggist is located at the southwest corner of Congress and Barnard Streets in Savannah, Georgia in 1866. They also established a Laboratory at 71 New Street in New York.

Here is an 1869, Oil of Life advertisement below, “The Greatest Blessing of the Age! Prof. Kayton’s Great Remedy for Pains and Aches” being sold by Jacob’s Lippman’s Wholesale Drug House, Principle Depot corner of Congress and Bernard Streets in Savannah, Georgia. This piece is from the Library of Congress. 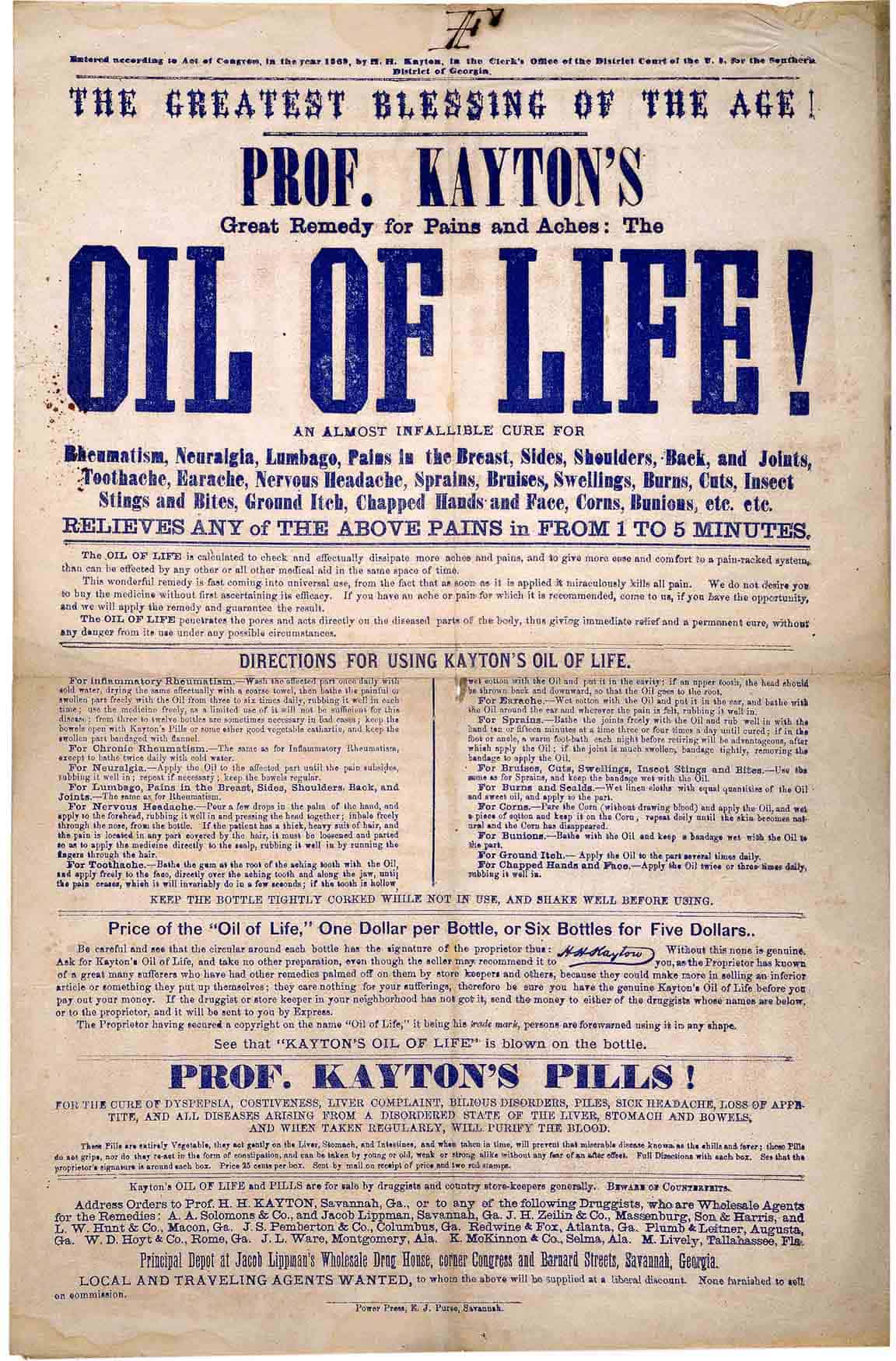 Here is another advertisement from The Macon Daily Telegraph from 1869 that shows that Jacob Lippman was Proprietor of Lippman’s Wholesale Drug House in Savannah. Georgia. He was selling Lippman’s Pyrafuge, The Great Chill and Fever Expeller. The Kayton’s Oil of Life is also noted.

The Lippman brothers, under the name “Jacob Lippman & Bro.” briefly manufactured and sold a medicine called Lippman’s Great German Bitters in New York and Savannah from 1870 to 1872 which retailed at a dollar per bottle. Advertising stated that the bitters was “prepared from the original German recipe now in possession of the proprietors and is the same preparation that was used in Germany upwards of a century ago.” Their trademark was an archangel slaying a dragon. There are two different bottles with slightly different embossings. Savannah is noted on both bottles while New York is embossed on the earlier variant, with Savannah.

Apparently in the summer of 1870, very soon after the business was established in New York, as a branch manufactory, the firm inquired about having a private die engraved for their exclusive use for Lippman’s Great German Bitters (Lippman’s Private Die Stamp from www.rdhinstl.com). The die was engraved by Joseph R. Carpenter & Co. and a proof was approved in the office of the Hon. Columbus Delano, Commissioner of Internal Revenue on September 20, 1870. The first issue on thin old paper was shipped from Philadelphia sometime during November of that year. 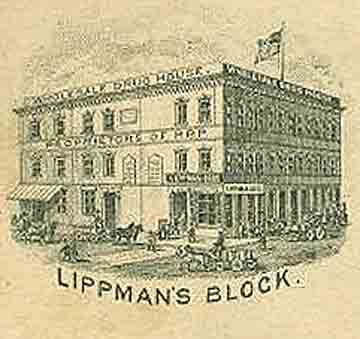 The brothers remained in business in Savannah until after the turn of the century. Their building was called Lippman’s Block and is represented on the illustration above which was taken from the post card below. Eventually they evolved into other medicines and the Lippman’s were major druggists of the era. 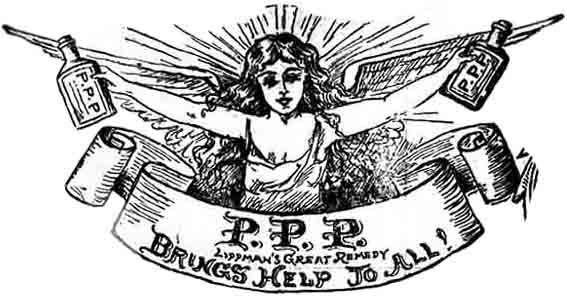 Their primary product was called P.P.P. which stands for Prickly Ash, Poke Root and Potassium. It was also called Lippman’s Great Remedy and touted as “The Best Blood Purifier in the World.” They were also involved in the turpentine business having access to the vast forests of pine trees in north Florida and Georgia. One of their last advertisements in 1902 was for Racine Launches (16 foot, one-H.P. six-seater boats they were selling for $275. Go figure. 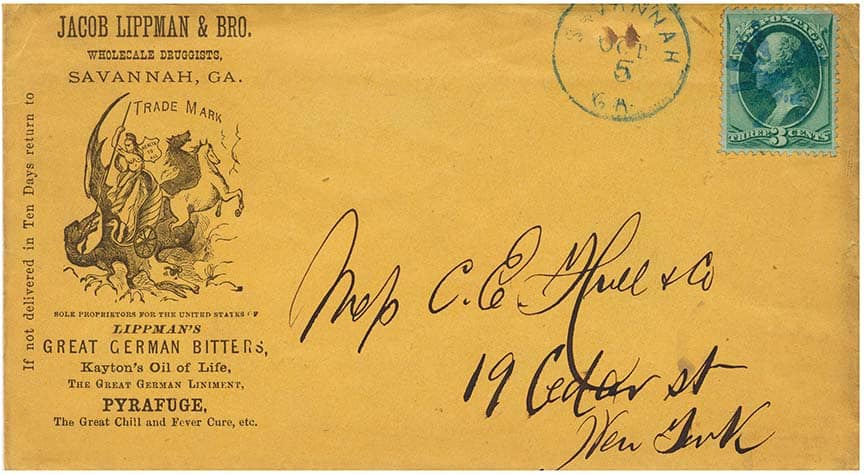 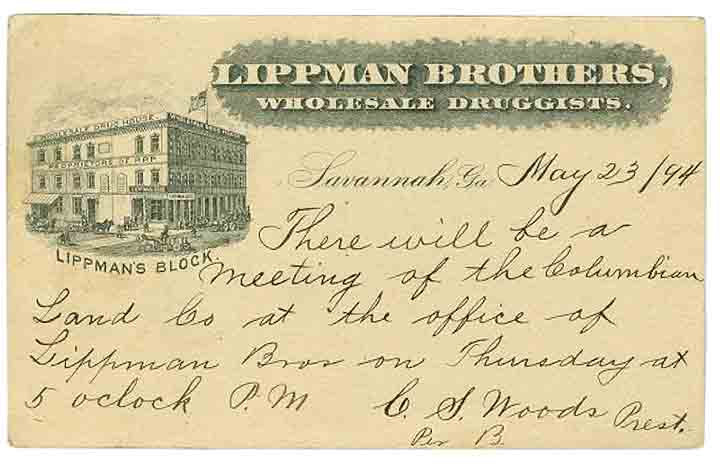 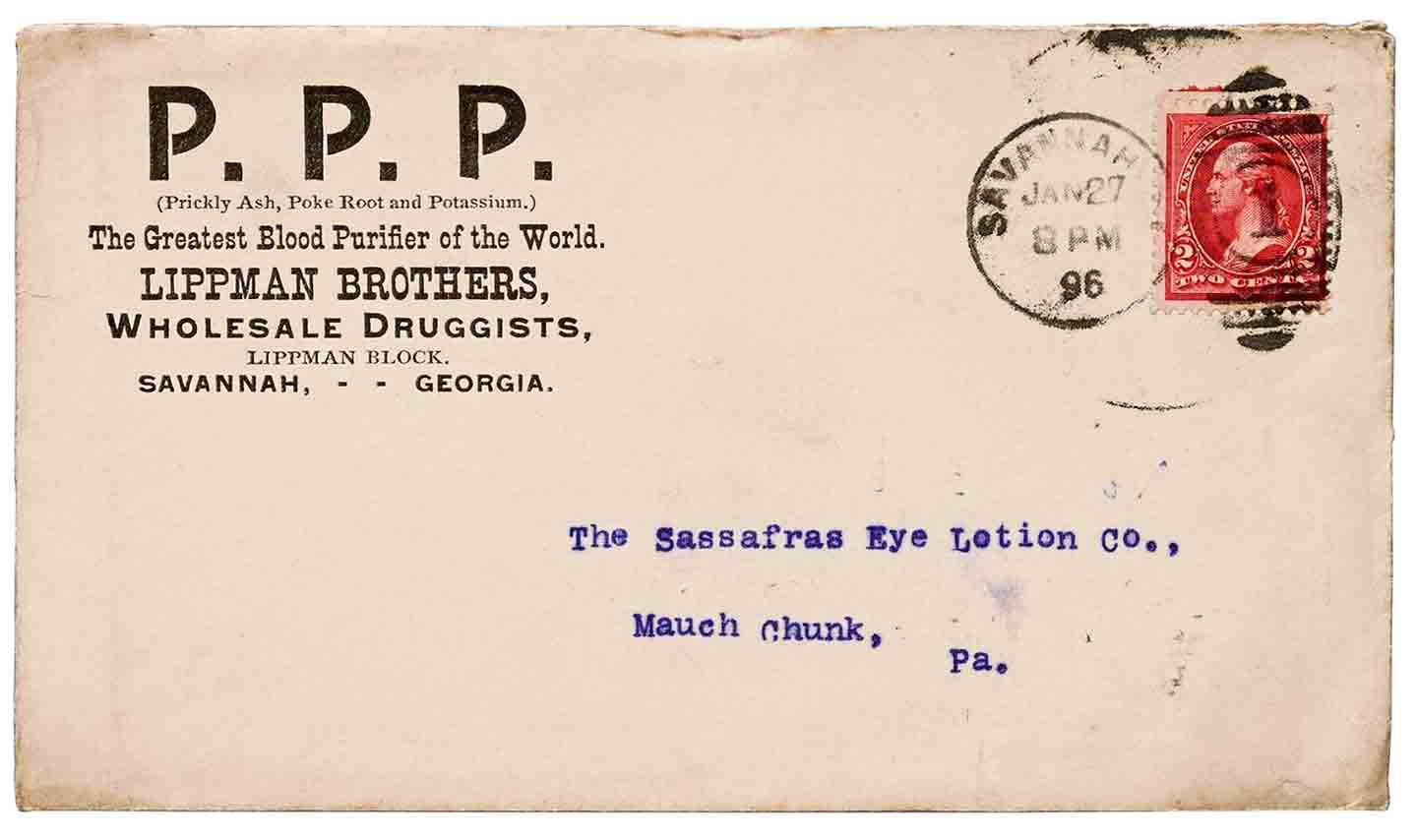 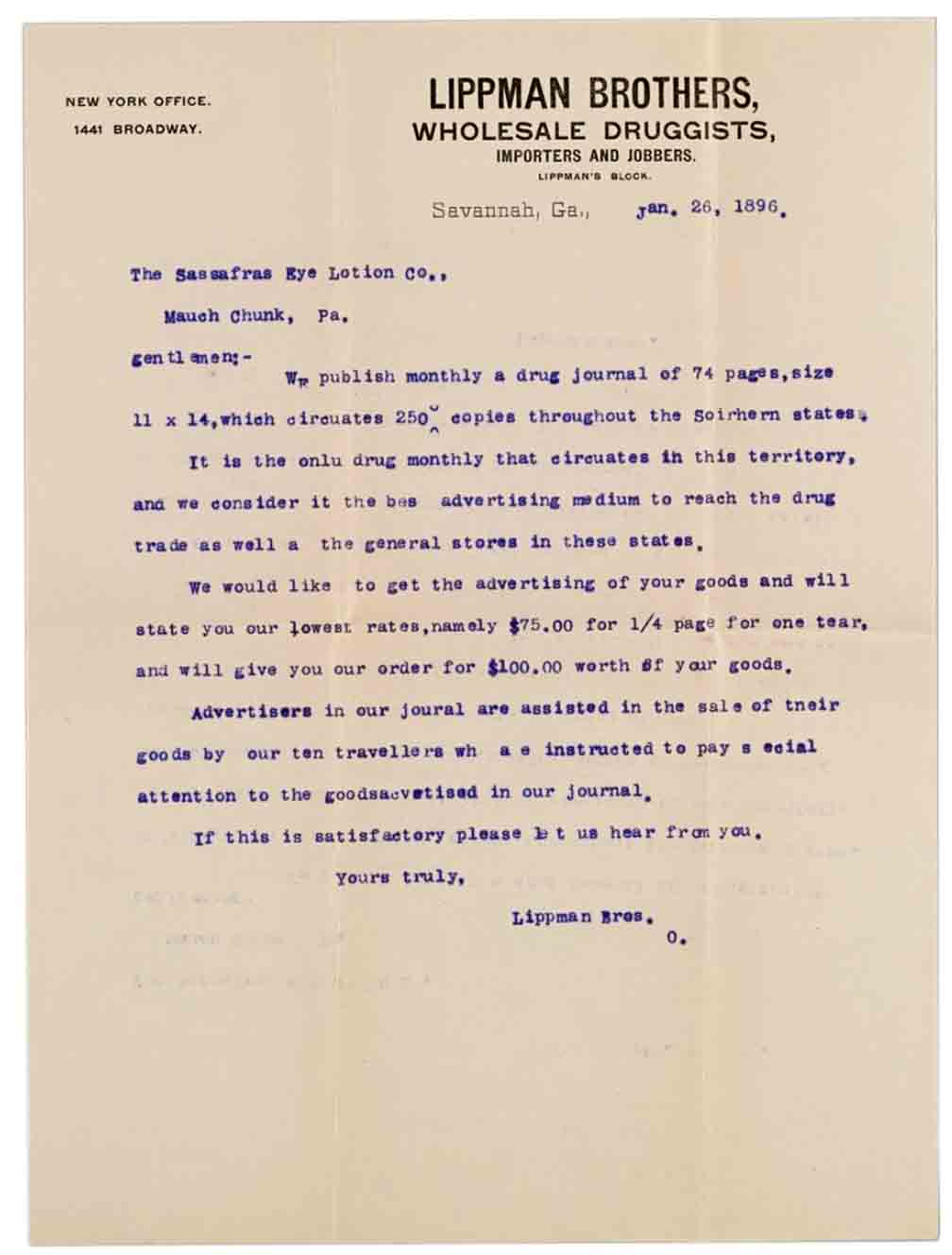 There is also an earlier variant with “New York” embossed on it: 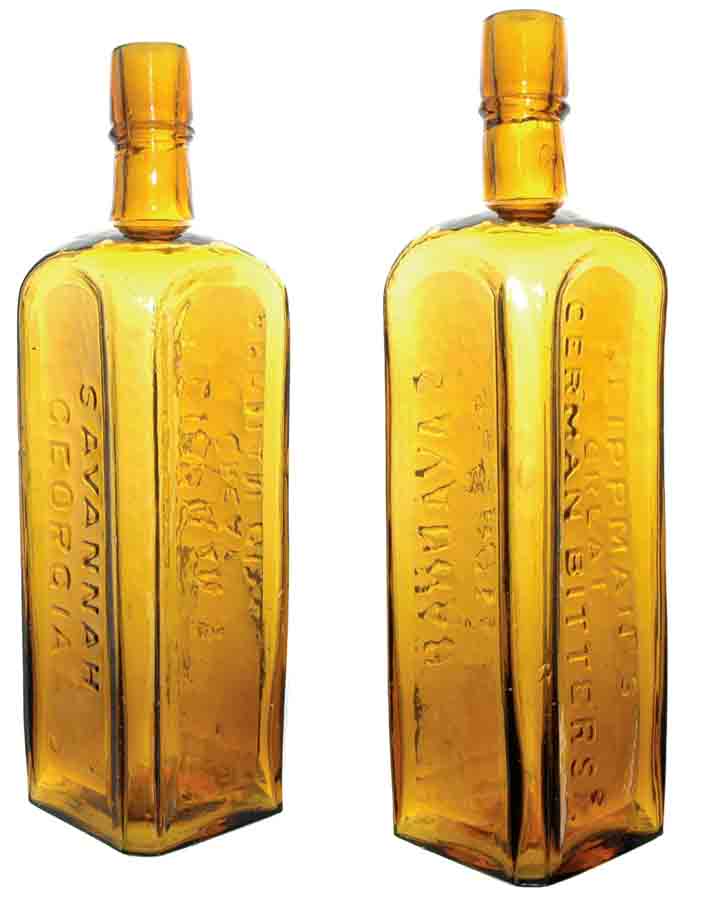 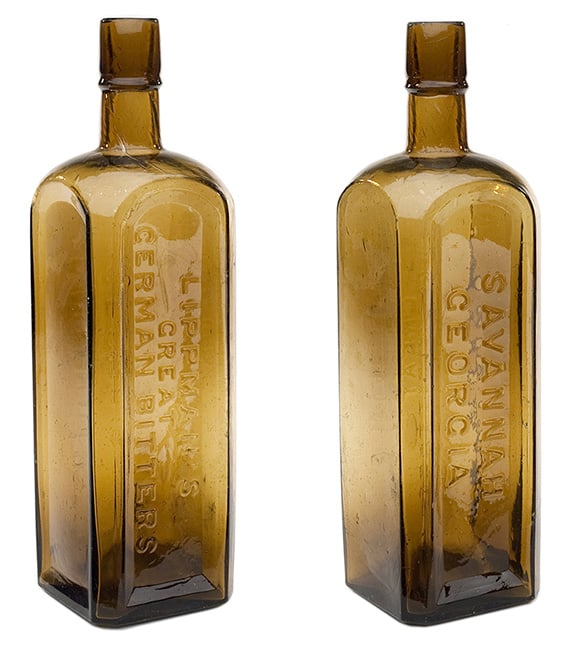 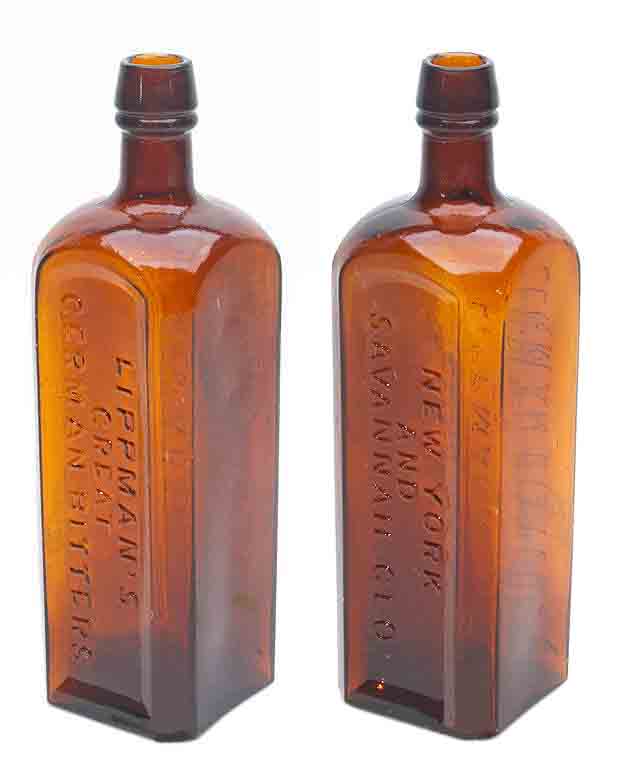 Read about another Savanna bitters: Arabian Bitters – One Thousand and One Nights 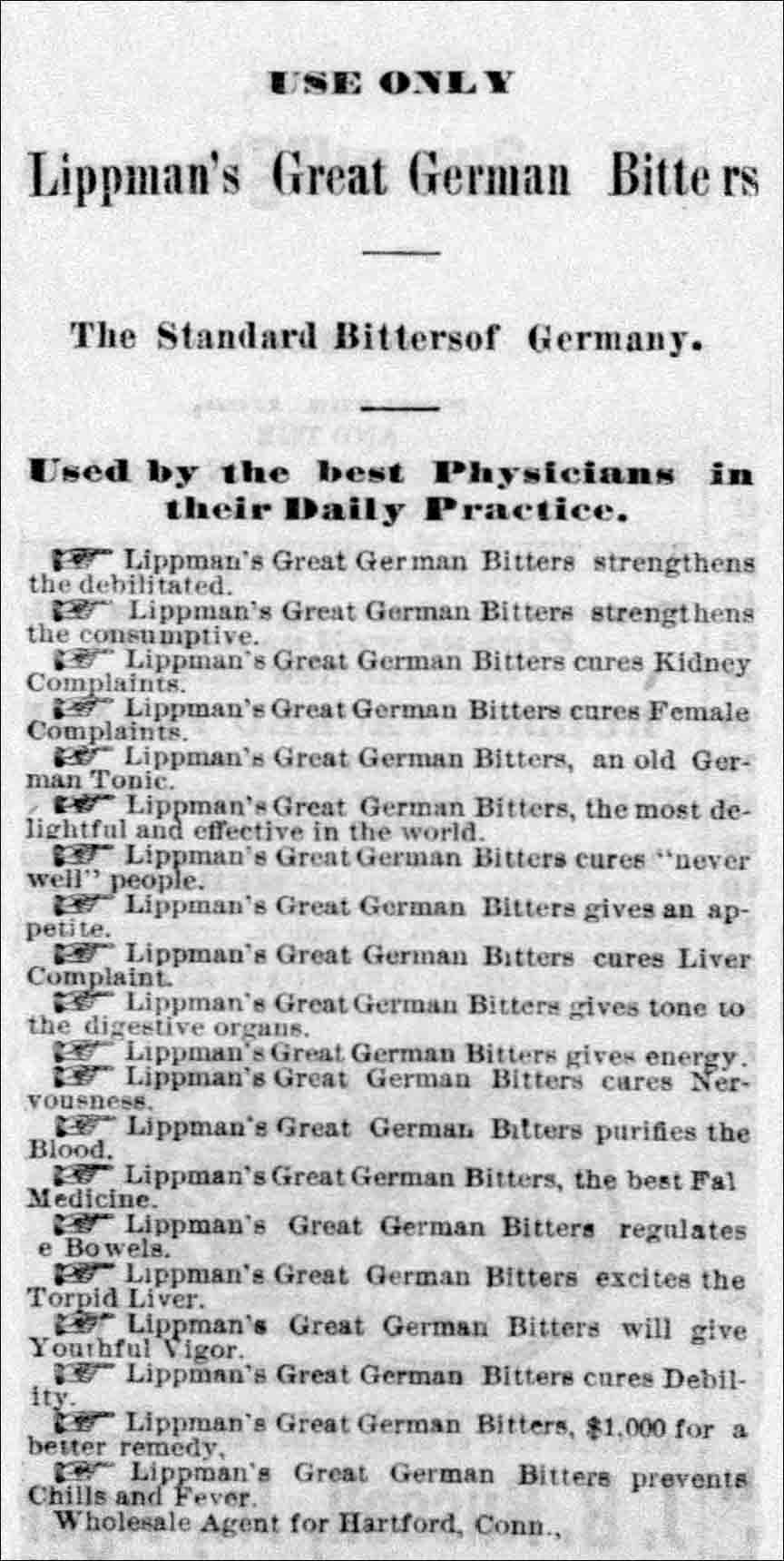 Louis, Lawrence and Jacob Lippman, doing business under the firm name of Lippman Bros., filed a bill against Edward I. Devane and wife, Alice W. Devane, Louis M. Ballard and wife, Sarah E. Ballard, to foreclose a mortgage. The mortgage was executed on the 7th day of November, 1885, by Devane and wife to Sarah E. Ballard, wife of Louis M. Ballard, appellants, to secure the payment of a promissory note for $580, payable the first day of January, 1887, with interest from date at the rate of eight per cent. per annum. This mortgage covers a lot of land in Lakeland, Polk county, was duly acknowledged and recorded in the proper office on the 16th day of December, 1885. The note is endorsed “Pay to the order of Lippman Bros.,” and is signed by Sarah E. Ballard; and on the mortgage the following assignment is written: For value received I do hereby assign, transfer and set over the within mortgage, and the note to secure which it is given, unto Jacob Lippman, Louis Lippman, and Lawrence Lippman, copartners under the firm name of Lippman Bros., of Savannah, Ga., their executors, administrators and assigns, with full power and authority to enforce the collection thereof, and to satisfy and cancel the same when paid off. Witness my hand and seal this—January, A. D. 1886. 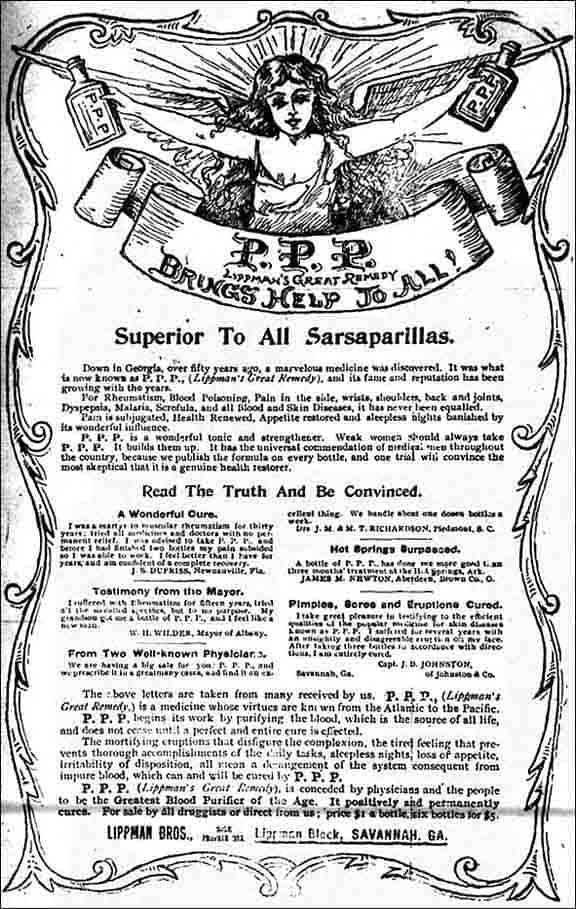 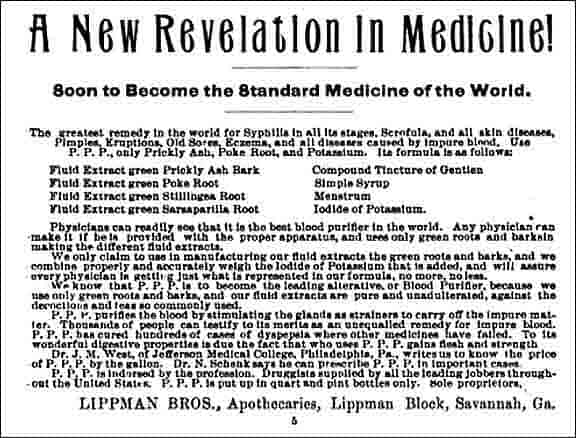 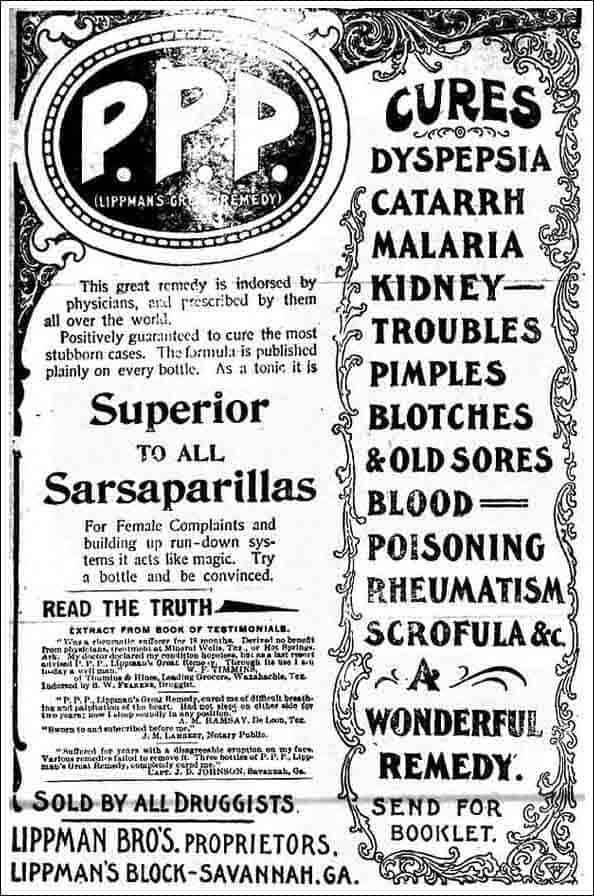 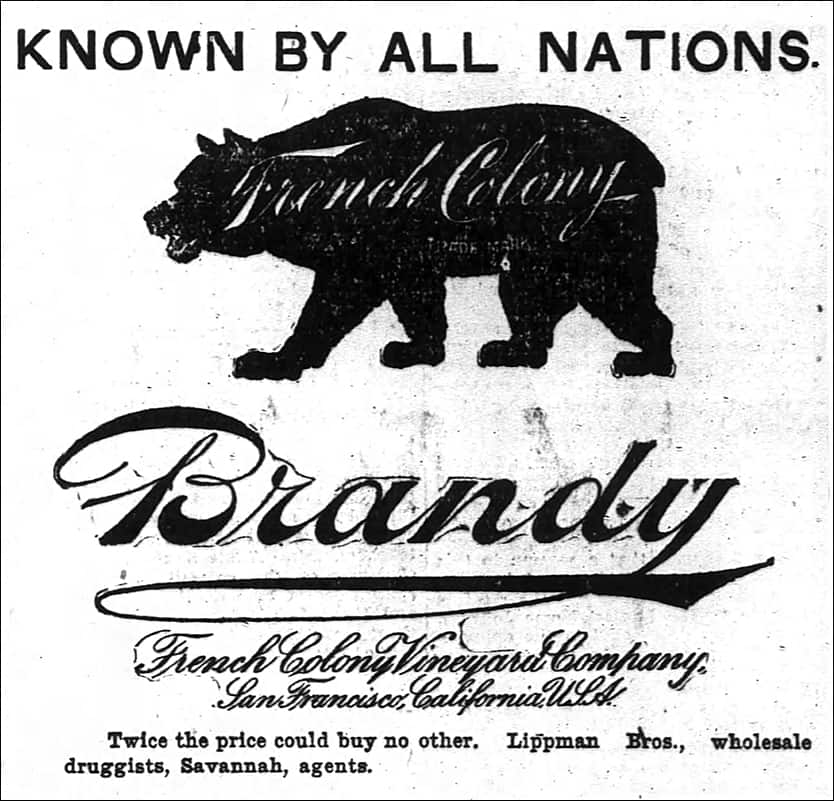 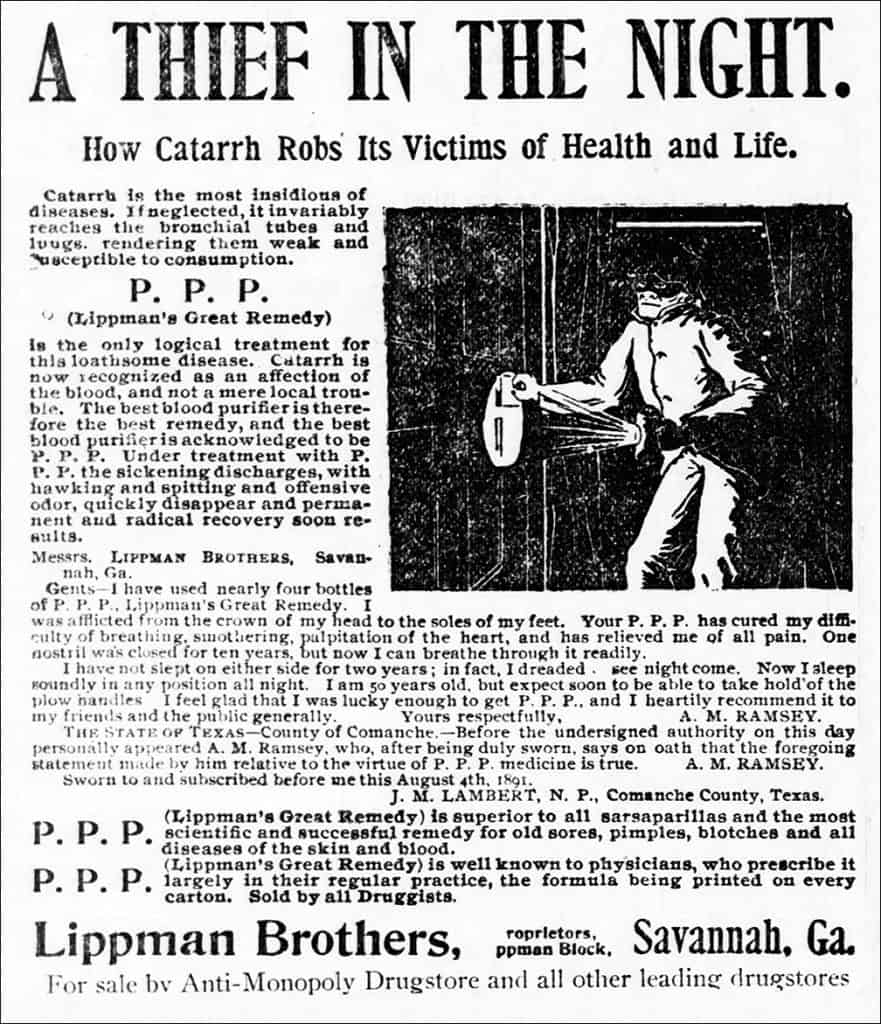 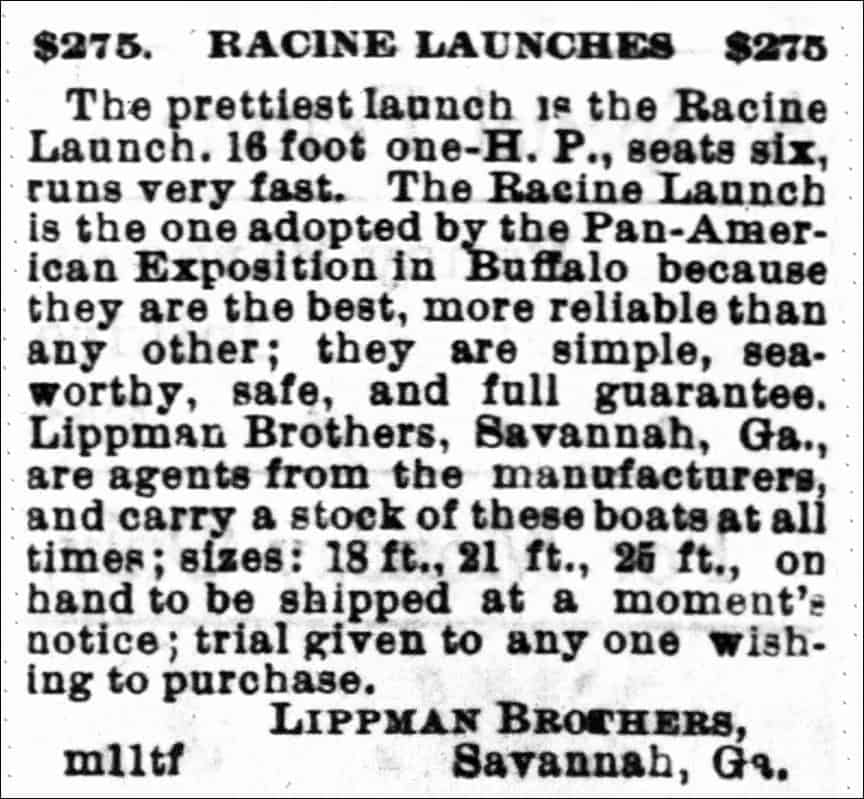 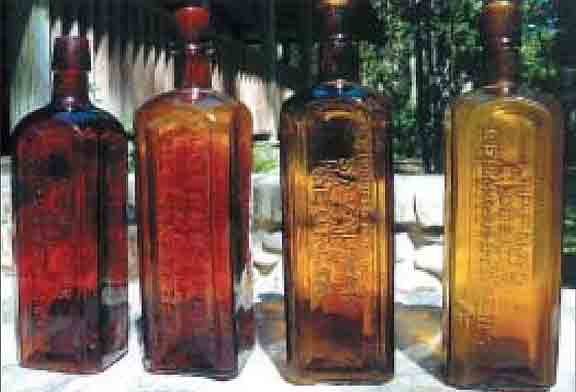