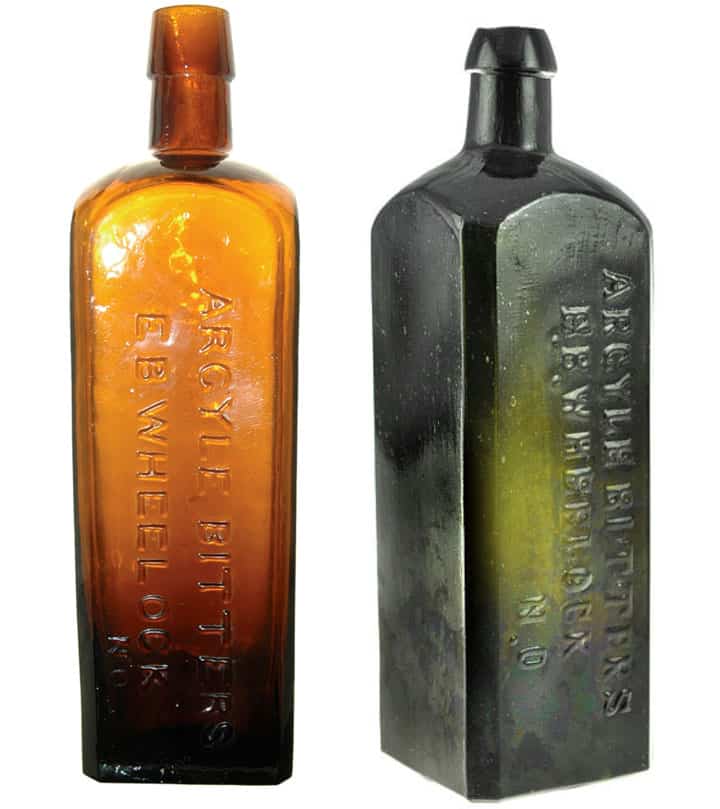 These elegant Bitters are peculiarly adapted for a warm climate”

Good grief, I love this outlandish marketing stuff. The female ‘fact’ posted below is one of the most preposterous marketing claims that I have come across recently. Maybe I should get some of this juice for my wife. I recognize some of her symptoms during football season when she is not moving quickly enough to keep us guys in the right ‘frame of mind’. Hopefully she won’t read this. 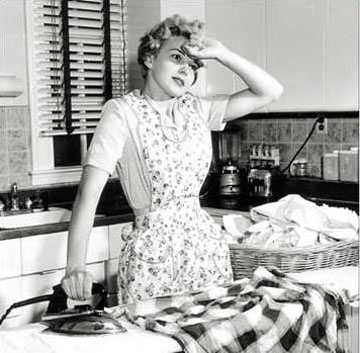 It is a well-established fact, that fully one-half of the female portion of our population are seldom in the enjoyment of good health, or, to use their own expression, “never feel well”.

It a well-established fact, that fully one-half of the female portion of our population are seldom in the enjoyment of good health, or, to use their own expression, “never feel well”. They are languid, devoid of all energy, extremely nervous, and have no appetite. To this class of invalids, these Bitters are especially recommended.

I first started reading more about Argyle Bitters last week during my series of Houston posts. It seems like this product was specifically developed in Pittsburgh and marketed for the warmer, humid climates such as New Orleans and Houston. I am fortunate to possess two rather different examples that are interesting to compare (see above). 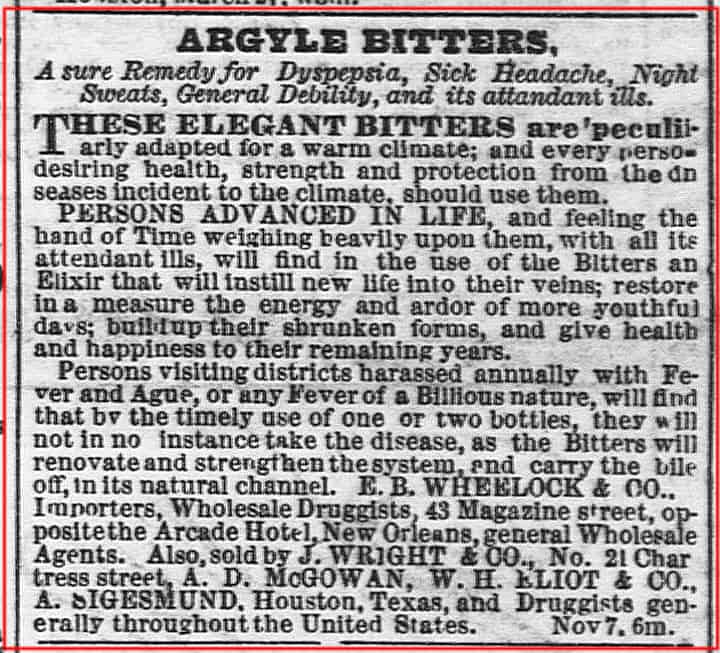 Advertisement from The Houston Telegraph – 1860 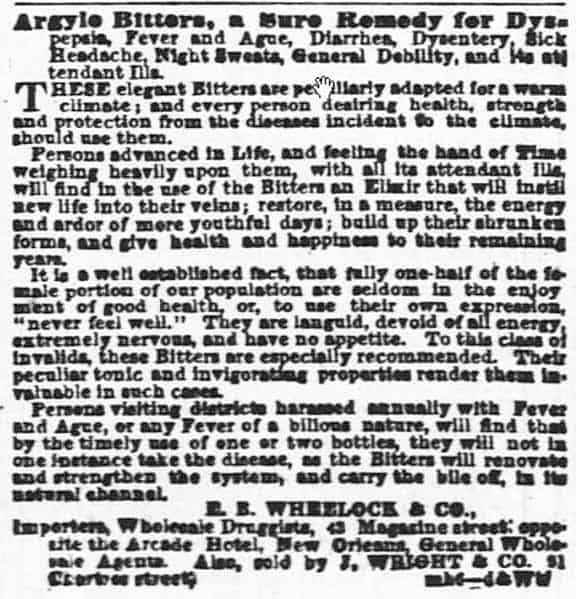 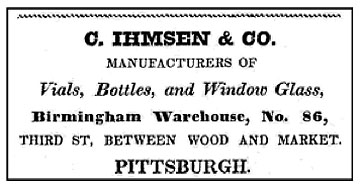 Lucien Napoleon Brunswig was born in Montmedy, France, in 1854, and was educated at the College of Etain. Apparently Brunswig thought his future lay in the United States and he came to the U.S. in 1871. He found work as an apprentice to a U.S druggist. In 1875 Brunswig opened his own drug store in Atchison, Kansas. After a year of business he sold his drug store and moved to Fort Worth, Texas.

In Fort Worth Brunswig opened a new drug store that not only sold retail but also dealt with wholesale pharmaceuticals. Within 5 years the business was producing $350,000 in annual sales. Business took Lucien to many places and one of those places was Independence, Missouri. There he met and married Annie Mercer. The newly married couple made their home in Fort Worth and they soon added children.

In 1882, George Finlay, the owner of a well-established wholesale drug firm in New Orleans invited Brunswig to join him as a partner. Brunswig sold his Fort Worth business and joined Finlay in the firm of Finlay and Brunswig. In 1885 Finlay died and Lucien Brunswig took over the entire wholesale drug firm which then became L. N. Brunswig and Company. In 1887 he took on a partner by the name of F.W. Braun. [The Southerly Flow] 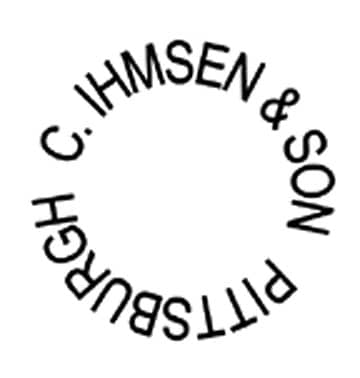 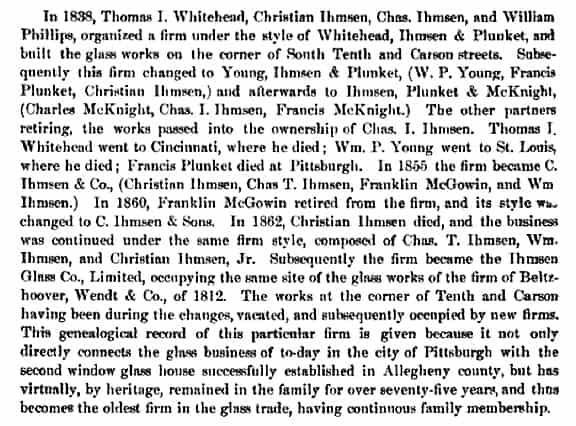 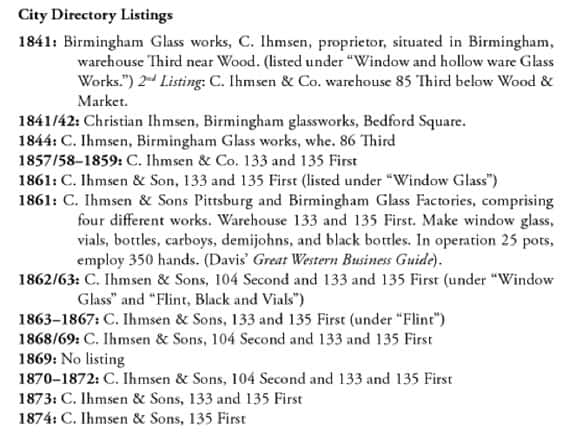 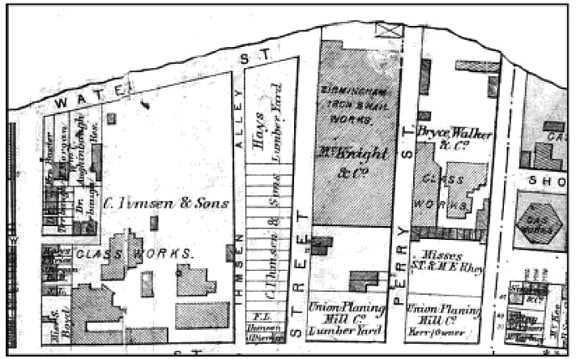 1872 map showing the location of the glassworks of C. Ihmsen & Sons on the south side adjacent to the Monongahela River. – Glasshouses and Glass Manufacturers of the Pittsburgh Region: 1795 – 1910 By Jay W. Hawkins 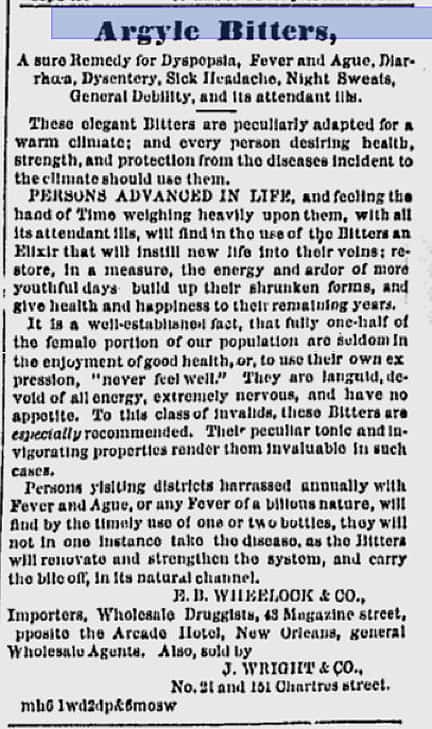 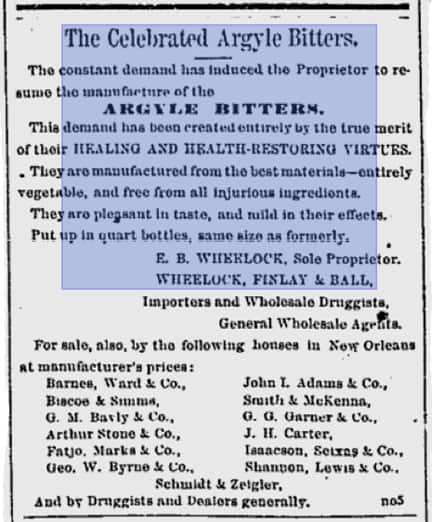 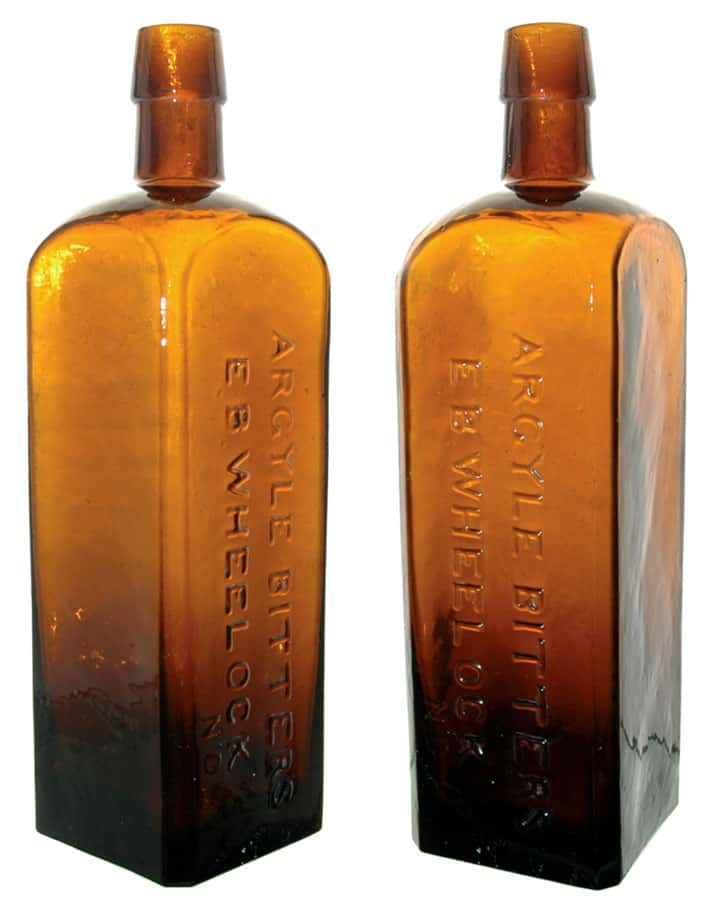 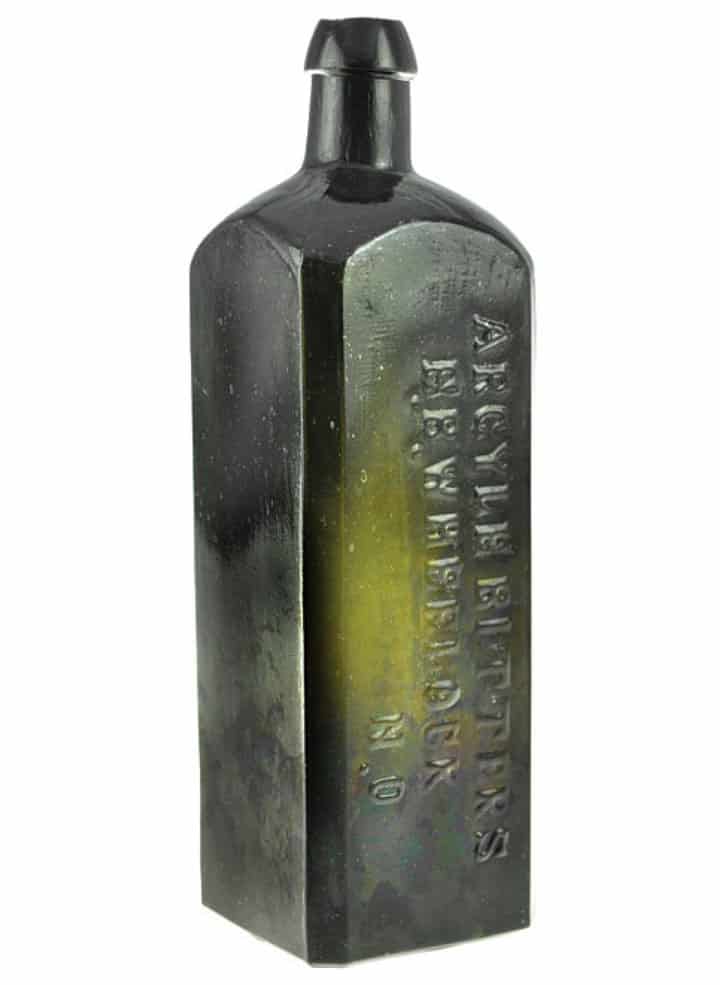 Ferdinand Meyer V is a native of Baltimore, Maryland and has a BFA in Fine Art and Graphic Design from the Kansas City Art Institute and School of Design. Ferdinand is the founding Principal of FMG Design, a nationally recognized design consultation firm. Ferdinand is a passionate collector of American historical glass specializing in bitters bottles, color runs and related classic figural bottles. He is married to Elizabeth Jane Meyer and lives in Houston, Texas with their daughter and three wonderful grandchildren. The Meyers are also very involved in Quarter Horses, antiques and early United States postage stamps. Ferdinand is the past 6-year President of the Federation of Historical Bottle Collectors and is one of the founding members of the FOHBC Virtual Museum.
View all posts by Ferdinand Meyer V →
This entry was posted in Bitters, History, Medicines & Cures and tagged Argyle Bitters, E. B. Wheelock, F.W. Braun, Finlay and Brunswig, George Finlay, L. N. Brunswig and Company, Lucien Napoleon Brunswig, New Orleans. Bookmark the permalink.